The process of petroleum involves in a large amount of oily wastewater that contains high levels of chemical oxygen demand (COD) and toxic compounds. So they must be treated before their discharge into the receptor medium. In this paper, wet peroxide oxidation (WPO) was adopted to treat the oily wastewater. Central composite design, an experimental design for response surface methodology (RSM), was used to create a set of 31 experimental runs needed for optimizing of the operating conditions. Quadratic regression models with estimated coefficients were developed to describe the COD removals. The experimental results show that WPO could effectively reduce COD by 96.8% at the optimum conditions of temperature , excess (HE) 0.8, the initial concentration of oily wastewater 3855 mg/L and reaction time 9 min. RSM could be effectively adopted to optimize the operating multifactors in complex WPO process.

The oily wastewater is generated by various oil, petroleum industries, oil refineries, chemical and petrochemical plants, metal working plants, oil terminals during washing of reserving tanks. The emulsion consists of water (up to 90%), oil (mineral, organic and synthetic) and surfactant. 12 The discharge of oily wastewater into the natural environment creates a major ecological problem throughout the world.3−5 It is necessary to purify this water so that it can be reused to save water resources and to protect the environment. It was reported that more than 2000 million tons of wastewater is produced by oil refineries only in the Middle East and European Union countries.67 Water quality of the oily wastewater is highly fluctuated depending on the crude oil extraction process, oil in water separation and subsequent preliminary treatment.8 Therefore, oily wastewater treatment is urgently needed in today's field of environmental engineering problems. Consequently, there is a need for environmentally benign technologies capable to effectively neutralize the oily wastewater and reduce its adverse impacts on the environment.

Of the various processes that can be used to treat oily wastewater, advanced oxidation processes (AOPs) with the capability of exploiting the high reactivity of hydroxyl radicals in driving oxidation have emerged a promising technology for refractory organic compounds treatment.9 Several technologies such as Fenton, photo-Fenton, wet oxidation, ozonation, photocatalysis, etc. are included in the AOPs and their main differences are the source of radicals. Wet peroxide oxidation (WPO) is a kind of AOPs developed on the basis of wet oxidation and it is developed in order to decrease the running cost, which is efficient under severe temperature and pressure conditions.10 It has gained wide attentions of many scholars in recent years.11−15 Single-factor analysis is employed in the current study of WPO process, but it does not predict the optimum conditions well and does not also reveal the interaction between the various operating parameters. In this paper, important factors and the interaction between the factors for WPO of oily wastewater by RSM optimization are investigated. RSM is a product of the integration of mathematics and statistics,16−20 which has been widely applied to professional research in biology and statistics, but it is rarely reported in environmental governance especially in the WPO process optimization. RSM can draw the response surface according to some of point value and obtain optimal operating point through the analysis of mathematical model. But the optimal point obtained from traditional methods is only the relatively optimal point of each group in orthogonal table and is not the optimal overall value of the real. MATERIALS AND METHODS Experimental Apparatus

The flow diagram of the experimental setup is shown in Fig. 1. The reactor is made from 1Cr18Ni9Ti, and its volume is 500 milliliter. It is subjected to a maximum temperature of 600 ℃, a maximum pressure of 40 MPa. Oily wastewater is selected from a plant of China and the wastewater contains 37% crude oil, 61% water and 2% sediment. Oxidant is commercial H2O2 (analysis purity, 35 wt% aqueous solution). 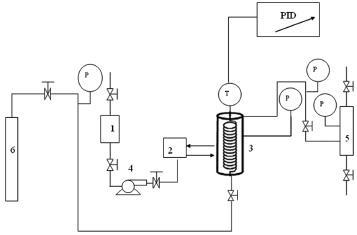 WPO of the oily wastewater was conducted in a laboratory- scale, batch reactor. The stirrer was used to keep from the formation of char resulting from thermal cracking of oily wastewater at the walls of the reactor.

The speed of the stirrer is 1150 r/min. The electric furnace was used as heater. The heating wires of electric furnace were placed below and around the reactor. The reaction temperature was monitored directly using thermocouple (inserted inside the reactor) and controlled within 1 ℃ by a temperature controller (Shanghai Yatai Instrumentation Co., N-8000 Digital Controller). Before the experiment, the reactor was loaded with oily wastewater and deionized water to bring the total volume of liquid to 90-110 mL and concentration of oily wastewater is approximately corresponding to initial COD of 1000-5000 mg/L. Then, nitrogen gas was used to purge the reactor for 10 min. After purging, the reactor was heated for about 50 min. Upon reaching the reaction condition of reaction temperatures from 250 to 330 ℃, reaction temperature remained stable within 1 ℃, then the specified amount of H2O2 was pressured and fed into the reactor using a syringe pump within 2 s at room temperature. The reaction was conducted for a given reaction time from 1 to 9 min. After the reaction, the sample valve of reactor was opened and the effluent was cooled rapidly in a shell and tube heat exchanger and then depressurized to ambient condition. The product stream was then separated into liquid and vapor phases. The liquid products were collected in a graduated cylinder. Liquid samples (ca.15 mL) were periodically withdrawn from the reactor and analyzed.

The diluted wastewater and COD of the collected liquid are measured by potassium dichromate method of Chinese Standard 11914-89. The HE is defined as equation 1. 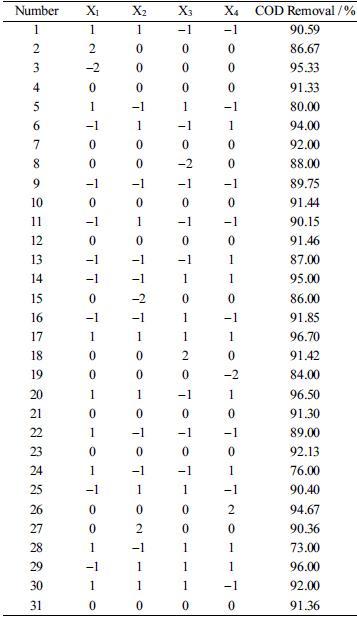 Table 3 shows estimated regression coefficient of COD removal and Table 4 shows the results of variance analysis for COD removal. From Table 4, it is seen that the influence of each independent factor on the models was tested for its level of statistical significance by analyzing the variance. These results show that the effects of all terms on COD removal are statistical significant at the 5% level. So it is concluded that the affecting factors for COD removal are more complex and it is joint action by many factors. 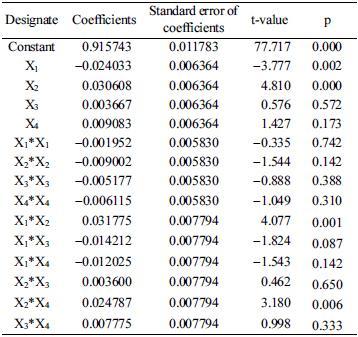 Table 4.The results of variance analysis for COD removal

Figs. 2, 3, 4, 5, 6 and 7 show the response surface plots for the variations of COD removal according to temper-ature, initial concentration of oily wastewater, reaction time, HE. In each plot, two factors are varied, while the rest is kept constant. 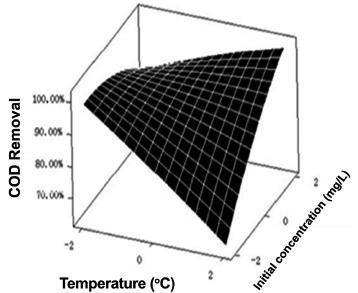 Figure 2.Response surface plots of the interaction between temperature and initial concentration of oily wastewater on COD removal. 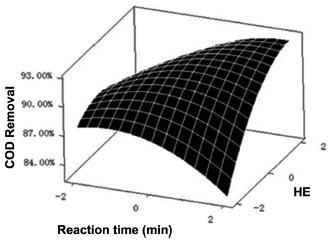 Figure 3.Response surface plots of the interaction between reaction time and HE on COD removal. 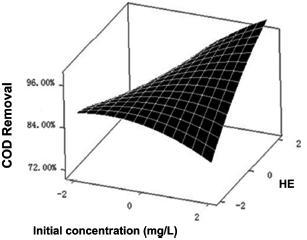 Figure 4.Response surface plots of the interaction between initial concentration of oily wastewater and HE on COD removal. 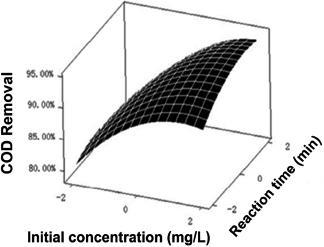 Figure 5.Response surface plots of the interaction between initial concentration of oily wastewater and reaction time on COD removal. 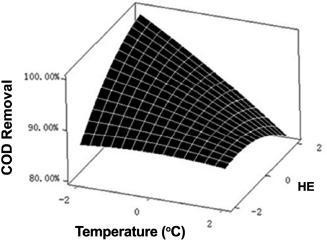 Figure 6.Response surface plots of the interaction between temperature and HE on COD removal. 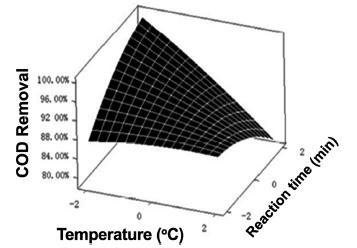 Figure 7.Response surface plots of the interaction between temperature and reaction time on COD removal.

Objective function of Minitab's response surface provides an intuitive tool for objective optimization and its unique response optimizer is a powerful tool for multiobjective problem to the solution encountered in the experimental design. And the target function is optimized by Minitab's response optimizer. The result is shown in Fig. 8. It is calculated that the optimized conditions are that temperature is 290 ℃, HE is 0.8, the initial concen-tration of oily wastewater is 3855 mg/L and reaction time is 9 min. 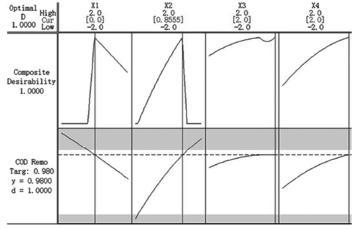 Figure 8.The optimized result for COD removal by response optimizer.

This study demonstrates that the WPO process is effective in reducing COD by 96.8%. Therefore, the WPO process is possibly suitable for a primary treatment for oily wastewater. Central composite design provides sufficient data to fit the quadratic models for COD removals. The optimization of the models provides the optimum conditions: temperature is 290 ℃, HE is 0.8, the initial concentration of oily wastewater is 3855 mg/L and reaction time is 9 min. RSM could be effectively adopted to optimize the operating multifactor in complex WPO process.