The combination of a high-affinity antibody to a hapten, and hapten-conjugated compounds, can provide an alternative to the direct chemical cross-linking of the antibody and compounds. An optimal hapten for in vitro use is one that is absent in biological systems. For in vivo applications, additional characteristics such as pharmacological safety and physiological inertness would be beneficial. Additionally, methods for cross-linking the hapten to various chemical compounds should be available. Cotinine, a major metabolite of nicotine, is considered advantageous in these aspects. A high-affinity anti-cotinine recombinant antibody has recently become available, and can be converted into various formats, including a bispecific antibody. The bispecific anti-cotinine antibody was successfully applied to immunoblot, enzyme immunoassay, immunoaffinity purification, and pre-targeted in vivo radioimmunoimaging. The anti-cotinine IgG molecule could be complexed with aptamers to form a novel affinity unit, and extended the in vivo half-life of aptamers, opening up the possibility of applying the same strategy to therapeutic peptides and chemical compounds.

Antibodies have been conjugated to chemical compounds for various purposes. Antibodies conjugated to enzymes are widely used in enzyme immunoassays or immunoblot analysis. Fluorescent dye-conjugated antibodies have applications in flow cytometric analysis, fluorescence immunoassays, and fluorescence microscopy. For immunoaffinity purification, antibody-conjugated gels or magnetic beads are commonly used. Antibodies have also been conjugated to radioisotopes for use in radioimmunoassays, radioimmunoimaging, and radioimmunotherapy. For clinical use, technetium (99mTc)-labeled anti-CEA antibody (arcitumomab) is available for the detection of CEA-expressing tumors (CEA-scan) (1). Radiolabeled anti-CD20 antibodies are used for the treatment of CD-20-expressing lymphoma and leukemia (2,3). Antibody-drug conjugates (ADCs) have recently become available for the treatment of cancers. Two ADCs, trastuzumab emtansine (T-DM1, Kadcyla) (4,5) and brentuximab vedotin (Adcetris) (6), have been approved for the treatment of human epidermal growth factor receptor-2 (HER2)-positive metastatic and recurrent breast cancer and lymphoma, respectively.

The hurdle in antibody conjugation lies in the non-selective nature of the conjugation site. Frequently, residues that are critical for antigen binding are involved in cross-linking; therefore, the antibody shows reduced affinity after cross-linking. Furthermore, in the case of ADC, the heterogeneous distribution of the drug-to-antibody ratio (DAR) makes both process development and pharmacokinetic profiling enormously difficult. Several measures have been developed to overcome this hurdle. Replacing residues with cysteine, and using this as a reactive handle, provided a homogenous and functional ADC (7,8). An artificial amino acid p-acetylphenylalanine (pAcPhe) was incorporated in a site-directed manner into recombinant antibodies using an engineered orthogonal amber suppressor tRNA/aminoacyl-tRNA synthetase pair, and was selectively coupled to an alkoxyamine derivate (9,10). Selenocysteine, the 21st natural amino acid, has a nucleophilic selenol group with a low pKa (5.2); this was incorporated into a monoclonal antibody and selective conjugation was successfully achieved using this amino acid as a chemical handle (11). Chemoenzymatic approaches are under active development. Formylglycine-generating enzyme (FGE), which recognizes a CXPCR sequence and converts a cysteine to formylglycine, has been explored to produce antibodies with aldehyde tags and generate bio-orthogonal reactive groups for selective conjugation (12). Chemically programmable antibodies were introduced to attach the chemical moiety specifically to the antigen-binding site (13). When combined with peptides or chemicals with affinity to a specific target molecule, this entity can serve as a unique affinity unit primarily extending the in vivo half-life of peptides or chemicals.

Due to the rapid development of antibody engineering technology, it is now possible to generate an antibody with a koff constant in the range of 1 × 10-5 to 1 × 10-6 s-1. With these values for the koff constant, the half-life of the antibody-antigen complex varies from 19 h to more than a week (Table 1) (14). Considering that the half-life of the thioester bond linking the antibody and the drug in T-DM1 is around 3.5 days (15), an anti-hapten antibody with this optimal koff constant and a hapten conjugate can facilitate the linkage of the antibody to the chemical compounds for a sufficiently long period (16).

The combination of a high-affinity antibody to a hapten, and hapten-conjugated compounds, can provide an alternative to the direct chemical cross-linking of the antibody and the compounds. An optimal hapten for in vitro use should be absent from biological systems. Additional characteristics such as pharmacological safety and physiological inertness would be beneficial for in vivo use. Additionally, versatile cross-linking to various chemical compounds is favored. Classically, histamine-succinyl-glycine (HSG), diethylenetriamine pentaacetic acid (DTPA), and 1,4,7,10-tetraazacyclododecane-1,4,7,10-tetraacetic acid (DOTA) have been used as haptens in vivo (17-19).

Fig. 1.Chemical structure of cotinine. (A) Nicotine is converted to cotinine by cytochrome p450 2A6 (CYP2A6) in human. (B) Structure of carboxycotinine (trans-4-cotininecarboxylic acid).

Recently, we introduced cotinine as an ideal hapten. It is a small chemical with a molecular weight of 176.22, and is a major metabolite of nicotine (Fig. 1A). Commonly used as a biomarker for smoking exposure, cotinine is absent in human or animal tissues (20). Cotinine is highly non-toxic, with an LD50 of 4 ± 0.1 g/kg in mice (21). No deleterious side effects were induced in humans treated with daily doses of cotinine up to 1,800 mg for 4 consecutive days. Recently, mild beneficial psychopharmacological effects of cotinine have been reported and the potential therapeutic use of cotinine in Alzheimer’s disease or post-traumatic stress disorder is under discussion (22). Carboxycotinine (trans-4-cotininecarboxylic acid, Fig. 1B) is commercially available at a reasonable cost; this carboxyl group can be conveniently employed for chemical crosslinking. While some immunogenicity is reported for DTPA and DOTA (23-26), no immune response to cotinine has been reported.

A high-affinity anti-cotinine antibody was originally generated by our group to develop a super-sensitive enzyme immunoassay for the detection of second-hand smoking exposure (27). The antibody has kon, koff, and KD values of 2.6 × 106 M-1ㆍs-1, 1.3 × 10-5 s-1 and 4.9 × 10-12 M, respectively (28). This antibody binds specifically to cotinine and does not cross-react with chemicals with similar structures, such as nicotinine, anabasine, caffeine, or cholesterol. Using this antibody, an enzyme immunoassay was developed which can determine cotinine concentrations in the range of 1 ng/ml to 1 μg/ml, comparable to the serum concentrations seen in passive smokers. Furthermore, cotinine levels measured in human volunteers using this antibody exactly corresponded with smoking behavior and showed better correlation than those obtained using liquid chromatography mass spectrometry (LC/MS) in a split assay. This antibody was confirmed to retain its reactivity even when expressed in various formats other than as a conventional IgG molecule (Fig. 2) (29,30).

IN VITRO USE OF COTININE/ANTI-COTININE ANTIBODY COMPLEX

The cotinine/anti-cotinine antibody complex provides an effective platform for immunodetection (Fig. 3A) and immunopurification (Fig. 3B) (30). Immunoblot analysis using serum, anti-human complement C5- and cotinine-bispecific tandem scFv-Fc antibody, and cotinine-conjugated horseradish peroxidase (HRP) showed a clear signal without the significant background observed in a parallel experiment using a classical secondary antibody, which reacts with the Fc region of immunoglobulins. Cotinine-conjugated magnetic beads complexed with the bispecific antibody specifically immunoprecipitated complement C5 from serum, whereas conventional immunoprecipitation using protein A beads resulted in the co-precipitation of human immunoglobulin. The bispecific antibody and cotinine-conjugated HRP were successfully employed in an enzyme immunoassay. All these optimal results are possible because cotinine is absent in the biological system and does not react significantly to any biological molecules, which is advantageous over the commonly used biotin-streptavidin system.

Over the last decade, aptamers specific to various target molecules have been developed. For use in biological experiments, aptamers have been conjugated to chemical compounds such as enzymes, biotin, or digoxin. For in vivo use, aptamers have to be cross-linked to polyethyleneglycol in order to extend their short half-lives (31). It was also reported that a vascular endothelial growth factor-neutralizing aptamer conjugated to a chemically programmable antibody retained both its reactivity and functionality (32). This observation raised the possibility that complexing with an antibody could extend the in vivo half-life of the aptamer. Recently, a cotinine-conjugated aptamer/anti-cotinine antibody complex has been successfully applied to various biological assays such as flow cytometry, immunoblot, immunoprecipitation, and enzyme immunoassay, using AS1411 and pegaptanib as examples (33) (Fig. 3C). Our group is actively testing whether the anti-cotinine antibody could extend the in vivo half-life of aptamers and potentiate their efficacy. 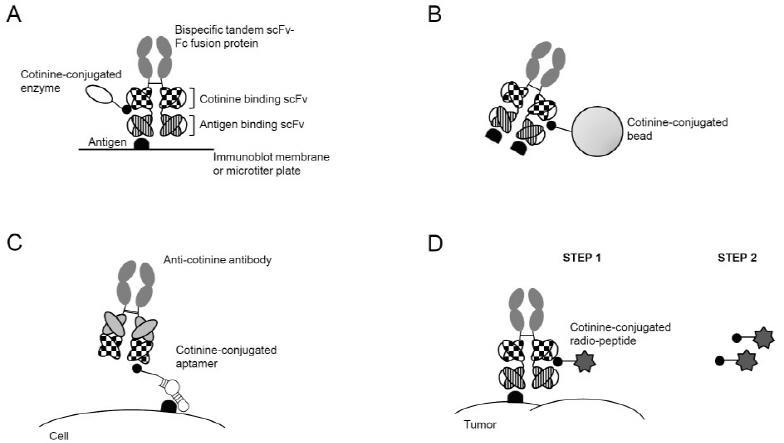 Fig. 3.Applications of anti-cotinine antibody. Bispecific antibody was used for immunodetection (A) and immunoprecipitation (B). Anti-cotinine antibody detected a cotinine-conjugated aptamer, which bound a cell-surface antigen (C). The complex of bispecific antibody and cotinine-conjugated radiopeptide was localized to a tumor (D). Parts of this figure have been copied and modified with permission (30).

Pre-targeted radioimmunotherapy (PRIT) technology was developed to reduce the non-specific irradiation of normal tissues and organs originating from the non-specific accumulation of a radiolabeled antibody (34). For PRIT, a bispecific antibody reactive to both the target molecule and a hapten is first injected into the individual. Subsequently, after the antibody has been cleared out of the normal tissue and optimal accumulation in tumor tissue has been achieved, the radiolabeled hapten is injected. The unbound radiolabeled hapten is rapidly cleared from the systemic circulation. HSG, DTPA, and DOTA have been used as haptens for PRIT (35-37). Recently, the cotinine/anti-cotinine antibody complex was applied to pre-targeted radioimmunoimaging (Fig. 3D) (29). In this study, a complex of cotinine dipeptide labeled with 131I, and anti-HER2- and cotinine-bispecific tandem scFv-Fc antibody, was successfully directed to HER2-positive breast cancer in a mouse xenograft model, as seen in single photon emission computed tomography images. The radiosignal was specifically enhanced at the tumor site when 131I-labeled cotinine dipeptide was re-injected with a time-delay. Our group is testing various forms of bispecific antibodies to determine the most efficient one for the specific delivery of radiolabeled hapten. Furthermore, the optimal peptide sequence for labeling is under active investigation.