Structural insights into the transcription-independent apoptotic pathway of p53

Within the nucleus, p53 induces transcription-dependent apoptosis via the transactivation of target genes such as Noxa, Bax, and Puma (Fig. 1). Transcription-dependent apoptosis induced by p53 is mediated via interactions of the p53 transactivation domain (p53TAD) with the components of the basal transcriptional machinery. Under normal conditions, the p53 level is precisely controlled by mouse double minute 2 (MDM2). MDM2 is an E3 ubiquitin ligase that negatively regulates p53 stability through ubiquitination and inhibits the transactivation ability of p53 by interacting with the p53 transactivation domain (p53TAD). In many cancers, p53 function is impaired by overexpression of MDM2. Interaction of the p53TAD with transcriptional machinery components such as the transcriptional coactivator p300/CBP is neutralized by MDM2 in cancer cells. This neutralization by MDM2 could be inhibited by p53-mimetic compounds for cancer treatment. Thus, blocking the interaction of p53 with MDM2 is a promising anticancer strategy to reactivate the p53 pathway. The α-helical structure of the 15-residue p53TAD peptide fragment (residues 15-29) in complex with an N-terminal domain of MDM2 provides a useful template for the structure-based rational design of MDM2-inhibiting anticancer drugs (9) (Fig. 2A and B). 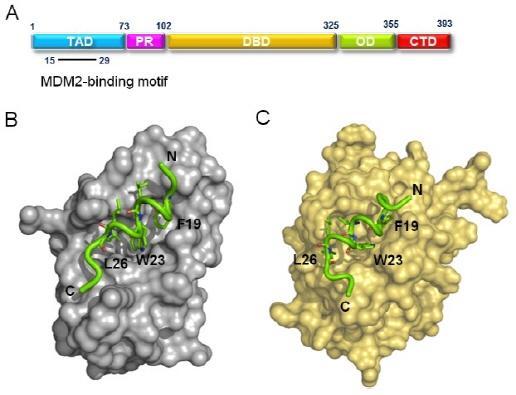 Recent studies have provided evidences supporting the pro-apoptotic effects of cytoplasmic p53 independent of its transcription ability (10-14). This non-transcriptional apoptosis of p53 is mainly achieved by the interaction between p53 and anti-apoptotic as well as pro-apoptotic B-cell lymphoma 2 (Bcl-2) family proteins. In an immediate response to apoptotic stresses, the cytoplasmic p53 moves rapidly to the mitochondria (14). In the mitochondria, p53 binds to anti-apoptotic Bcl-2 family proteins Bcl-XL and Bcl-2 and, releasing the pro-apoptotic effectors Bak/Bax from the complex with the anti-apoptotic proteins. Subsequently, the released Bak and Bax induce the lipid pore formation in the outer mitochondrial membrane, which elicits cytochrome c release (15). In addition, p53 can directly activate Bak and/or Bax through a “hit and run” mechanism to trigger the permeabilization of outer mitochondrial membrane (11).

A DUAL ROLE OF P53 IN APOPTOSIS PATHWAY

Based on results from recent studies, it is proposed that, under pro-apoptotic conditions, p53 can play a dual role in apoptosis in different cellular compartments (Fig. 1). Within the nucleus, p53 acts as a transcriptional activator and induces target gene expression through its interaction with the basic transcriptional machinery components, such as transcriptional coactivator CBP/p300, eventually leading to transcription-dependent apoptosis. This transcription-dependent interaction of p53 can be inhibited by binding with MDM2. In the mitochondria, p53 interacts with Bcl-2 and Bcl-XL, thereby triggering transcription-independent apoptosis. It should be noted that these binding events with different partners, occurring in distinct cellular compartments, are governed by the same binding motif of p53TAD (residues 15-29).

Interactions of p53 with Bcl-XL and Bcl-2 have been observed within the cell (14). Previously, the p53 DNA-binding domain (p53DBD) was suggested to mediate the interactions with Bcl-XL and Bcl-2 (15,28-30). Recently, it was shown that the binding of the p53DBD induces an allosteric conformational change in the BH3 peptide-binding region of Bcl-XL to facilitate binding with pro-apoptotic BH3-only proteins (29,31). However, previous cell biology studies showed that the p53 N-terminal domain (p53NTD), encompassing the p53TAD and proline-rich (PR) domain, is sufficiently able to trigger mitochondrial apoptosis in a transcription-independent manner, while the p53DBD is dispensable (32). In addition, the caspasecleaved p53 N-terminal fragment corresponding to residues 1-186, which includes the p53NTD and the truncated p53DBD, triggered transcription-independent apoptosis (33). These accumulated evidences indicated that the p53NTD alone, without the p53DBD, can mediate transcription- independent apoptosis by binding to anti-apoptotic Bcl-2 family proteins.

Since the interaction of p53 with MDM2 is a promising target in anticancer therapy, various peptidomimetic small molecules have been developed as protein-protein interaction blockers using the structure of the p53TAD peptide bound to MDM2 (9,38,39). Nutlin-3 is an imidazoline-based MDM2 antagonist that potently inhibits the interaction between p53TAD and MDM2 (40,41) (Fig. 2A). Currently, Nutlin derivatives are in early clinical development as anticancer therapeutics. Previously, anticancer apoptotic pathway activation by Nutlin was thought to stem only from its inhibition of the p53-MDM2 interaction. However, recent studies showed that Nutlin exerts its pharmacological action via transcription-independent as well as transcription-dependent apoptosis program of p53 (42). Recently, it was also shown that the transcription-independent p53 apoptosis largely contributes to Nutlin-triggered apoptosis in cancer cells (43,44). 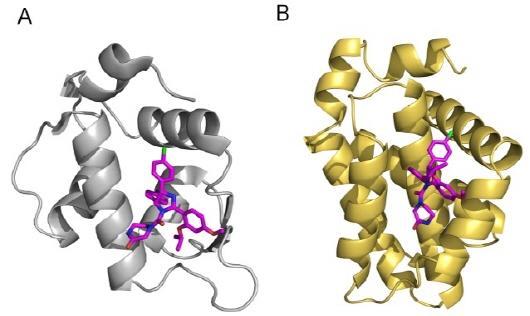 A recent study provided a structural model of the Bcl-XL/Nutlin-3 complex (Fig. 3B), which suggests the multi-target-based mechanism of Nutlin-3 binding to distinct target proteins, MDM2 and Bcl-XL (50). MDM2 and Bcl-XL display high similarity in their binding pockets, although their three-dimensional structures are quite different. Structural comparison between the Bcl-XL/Nutlin-3 and the MDM2/Nutlin-3 complexes showed a highly conserved binding mechanism of Nutlin-3 to MDM2 and Bcl-XL (Fig. 3). The imidazoline-based scaffold structure of Nutlin-3 resembles the α-helical structure of both the pro-apoptotic BH3 and p53TAD peptide (residues 15-29) backbones (41,51). In addition, the aromatic rings of Nutlin-3 bind to the binding sites surrounded by the bulky hydrophobic side-chains of MDM2 and Bcl-XL. A chlorophenyl ring of Nutlin-3 makes the most important contribution to complex formation with both MDM2 and Bcl-XL by fitting snugly into the hydrophobic grooves. Therefore, the overall mechanism underlying the binding of Nutlin-3 with Bcl-XL is analogous to that of Nutlin-3 with MDM2.

MDM2 and Bcl-2 are promising anticancer target proteins that are related to cell cycle arrest and mitochondrial apoptosis, respectively (52). Concurrent suppression of MDM2 and Bcl-2 has a synergistic apoptotic effect in acute myeloid leukemia (AML) (53). In addition, co-treatment with Nutlin-3 and ABT-737 greatly enhanced the sensitivity of cells with high MDM2 levels to apoptosis (54). Thus, the combined inhibition of MDM2 and Bcl-2 could be a multi-target-based anticancer strategy to trigger tumor cell death. In combination with the previously reported results that the Bcl-2 inhibitor BH3I blocked the interaction between p53 and MDM2 (55), the Bcl-XL/Nutlin-3 complex structure sheds lights on structure-based design of a multi-targeting anticancer agent that can simultaneously inhibit MDM2 and Bcl-XL proteins. The three-dimensional structural information could also be utilized to optimize multi-target anticancer therapeutics.