Perspectives on the therapeutic potential of short-chain fatty acid receptors

There is rapidly growing interest in the human microbiome because of its implication in metabolic disorders and inflammatory diseases. Consequently, understanding the biology of short chain fatty acids and their receptors has become very important for identifying novel therapeutic avenues. GPR41 and GPR43 have been recognized as the cognate receptors for SCFAs and their roles in metabolism and inflammation have drawn much attention in recent years. GPR43 is highly expressed on immune cells and has been suggested to play a role in inflammatory diseases such as inflammatory bowel disease. Both GPR41 and GPR43 have been implicated in diabetes and obesity via the regulation of adipose tissue and gastrointestinal hormones. So far, many studies have provided contradictory results, and therefore further research is required to validate these receptors as drug targets. We will also discuss the synthetic modulators of GPR41 and GPR43 that are critical to understanding the functions of these receptors.

G-protein-coupled receptors (GPCRs) comprise a large family of seven-transmembrane receptors that convey various extracellular stimuli such as light, odorants, cytokines and hormones to a cascade of intracellular signaling. There are ∼800 predicted human GPCRs of which over 300 are non-olfactory receptors that are involved in various physiological processes (1,2) and can be categorized into six subfamilies (Class A-F) based on their conserved residues and ligands (3,4). The importance of GPCRs is emphasized by the fact that 27% of FDA-approved drugs target GPCRs (5), although only a minor portion of these non-olfactory receptors are exploited as therapeutic targets. GPCRs activate heterotrimeric G proteins, where the α and βγ subunits are responsible for signaling, and independent from the G protein signaling they also recruit β-arrestins to be desensitized and transduce a signal.

Fatty acids are categorized by the number of their carbons. Short chain fatty acids (SCFAs) refer to carboxylic acids with aliphatic tails of less than 6 carbons such as formic, acetic, propionic, butyric, isobutyric, valeric, isovaleric, and 2-methylbutyric acids (6). SCFAs are typically synthesized in vivo, whereas longer chain fatty acids are often derived from food sources. Among them, acetate, propionate, and butyrate consist of over 90% of the SCFAs in the colon and are largely produced by multiple anaerobic bacteria in the human gut (7). SCFAs have been regarded as an energy source for gut epithelium and peripheral tissues, as well as a regulator of metabolism and inflammation (8). A decade ago, it was found that two GPCRs, GPR41 (FFAR3/FFA3) and GPR43 (FFAR2/FFA2), can sense these fatty acids (9-11). These receptors are expressed not only in the gut endocrine cells in the vicinity of SCFA production, but also at multiple other sites such as adipose tissue, pancreatic islets, and immune cells (9-13). Because of the relatively recent deorphanization of GPR41 and GPR43, more and more studies have been emerging that unveil the roles of these receptors, and their SCFA ligands, in human physiology. This review will focus on the biological functions of GPR41 and GPR43 as relevant to drug targeting and outline the current status of drug discovery with these receptors.

GPR41 and GPR43 were first identified, along with GPR40, as constituents of a novel GPCR gene cluster spanning about 100kb in human chromosome 19q13.1 (14). They were later found to be activated by SCFAs, which showed a distinct structure-activity relationship toward these two receptors. The order of potency for GPR43 was propionate = acetate ＞ butyrate ＞ valerate = formate, while for GPR41 it was propionate = butyrate = valerate ＞ acetate = formate (9-11). However, these ranked orders of potency were later found to be not conserved in other species (15). Although both receptors respond to the same group of ligands, GPR41 and GPR43 are coupled to a different set of downstream signaling cascades. GPR41 selectively couples with Gαi, which inhibits adenylyl cyclase, so that its activation by SCFAs decreases the intracellular concentration of cyclic AMP (cAMP) (9,10). Acetate and propionate activate GPR43 and in turn, induce both Gαi and Gαq, which decreases cAMP and increases cytoplasmic calcium ions (9-11). In addition, our group recently showed that Nuclear Factor κB (NFκB) can be regulated by the GPR43-β-arrestin 2 pathway (16), whereas, as far as we know, there is no report that has linked GPR41 to β-arrestins.

GPR41 was initially found to be broadly expressed in various tissues, including the pancreas, spleen and adipose tissue. Subsequently, it was found that SCFAs stimulate the production of the hormone leptin in mouse white adipose tissue cells via GPR41 (17). However, several groups were unable to detect GPR41 in mouse adipose tissue or in a differentiated adipocyte cell line, but instead found GPR43 to be highly expressed in those cells (18-21). In addition, GPR41 is present in a variety of enteroendocrine cells and enteric neurons with varying degrees of expression level and is implicated in the release of gastrointestinal hormones (22,23). Like the controversy over its expression in adipose tissue, one group reported that GPR41-knockout (KO) mice had significantly less fat than wild-type mice (23), while another group later showed no significant difference between the fat content of wild type and GPR41 KO mice (24). In addition, Zaibi and co-workers disclosed their unpublished results, which found that male GPR41 KO mice were obese rather than lean, supporting their prediction that GPR41 knockout mice would have reduced leptin levels because of decreased expression of GPR43 in adipose tissue and subsequently, reduced stimulation of leptin secretion by plasma SCFA (19). These discrepancies may arise from the different genetic backgrounds or rearing conditions in the various experiments, which would affect the gut microbiota. Finally, a pair of recent papers revealed an intriguing physiological function of GPR41. In the fed state, SCFAs and ketones modulate the sympathetic nervous system directly through the GPR41-Gβγ-PLCβ-ERK axis to contribute to sympathetic activation (21,25). Taken together, GPR41 agonists might have a beneficial effect on the treatment of obesity and other metabolic diseases. To clarify the in vivo functions of GPR41, careful examination of KO mice and highly specific small molecule modulators would be needed.

GPR43 is expressed in the adipose tissue, intestine, and especially immune cells such as peripheral blood mononuclear cells (PBMC), eosinophils, and neutrophils (9-11,22,26-28). For the last decade, it has been quite well established that SCFAs induce neutrophil chemotaxis via GPR43 in p38 and Akt-dependent manners (10,28-30). Intriguingly, more recent studies showed contradictory results that GPR43 KO mice had either exacerbated or reduced inflammation in a colitis model (28,29,31,32). Although a link between GPR43 and inflammatory bowel disease (IBD) (and possibly other inflammatory diseases) seems to be firm, it remains to be resolved whether an agonist or antagonist of GPR43 would be the correct treatment for this disease.

The plasma levels of free fatty acids are usually increased in metabolic diseases such as obesity and type II diabetes, resulting in insulin resistance and lipid deposition (33,34). The downregulation of lipolysis in the adipose tissue could therefore be a plausible pharmacological strategy for improving insulin sensitivity. The data showing that GPR43 is expressed in adipose tissue and differentiated adipocytes raised the possibility of the involvement of GPR43 in lipid metabolism. Indeed, SCFAs enhanced adipogenesis and inhibited lipolysis, whereas knockdown or knockout of GPR43 abolished these effects (18,35). In agreement with these results, a synthetic GPR43 agonist attenuated lipolysis (36-38). As was the case for GPR41, studies of GPR43 KO yielded conflicting phenotypes. When mice deficient for GPR43 were fed a high fat diet, the mice displayed lower body fat mass, improved glucose control, lower levels of plasma lipids, and decreased inflammation in white adipose tissue compared to the wild type, probably due to the elevated body temperature and subsequently increased energy expenditure of the GPR43 deficient mice (39). However, Tsujimoto and co-workers demonstrated that GPR43 KO mice were obese on a normal diet, whereas mice overexpressing GPR43 in adipose tissue were lean even when fed a high-fat diet (20). In that paper, they hypothesized that this discrepancy may result from the differences in the genetic backgrounds of the mice used in the different studies. It is the latter study that is more likely, given that GPR43 and SCFAs promote the release of peptide YY and glucagon-like peptide-1, which is an anorexic hormone and incretin hormone, respectively (26,27,40,41). Taken together, these data strongly indicate that GPR43 agonists have potential as therapeutics for the treatment of type II diabetes and obesity.

As shown in Table 1, early discovery efforts produced a series of allosteric agonists by Amgen (36,42,43) and orthosteric agonists generated by Euroscreen SA (44). The series of allosteric compounds from Amgen were completely selective for GPR43 over GPR41 (S. Kim, unpublished result). These compounds alone produced a full agonistic response as compared to SCFAs and showed similar potency toward human GPR43 and mouse GPR43, and acted in a positively cooperative fashion with SCFAs (36,42,43). In addition, these phenylacetamide compounds have been shown to inhibit lipolysis in differentiated adipocytes and lower free fatty acid levels in mice serum (45,46), which is consistent with the previous data from siRNA treated and KO mice. Euroscreen SA developed many synthetic orthosteric ligands with better potency that displayed similar effects such as increased glucose uptake, decreased lipolysis, increased GLP-1 level, improved oral glucose tolerance test, and reduced TNFα production (37,47,48). An antagonist developed by Galapagos for the treatment of psoriasis was announced as an orally available small molecule that reduced migration of neutrophils in rodent studies (49). Presently, this is the only compound in clinical phase among the different modulators of GPR43. In contrast to GPR43, the development of GPR41 modulators has been less transparent. A GPR41-selective agonist and antagonist were developed by Arena pharmaceuticals (50). However, the patent did not disclose the potency of either of these compounds.

Table 1.Selective agonists and antagonists of GPR41 and GPR43 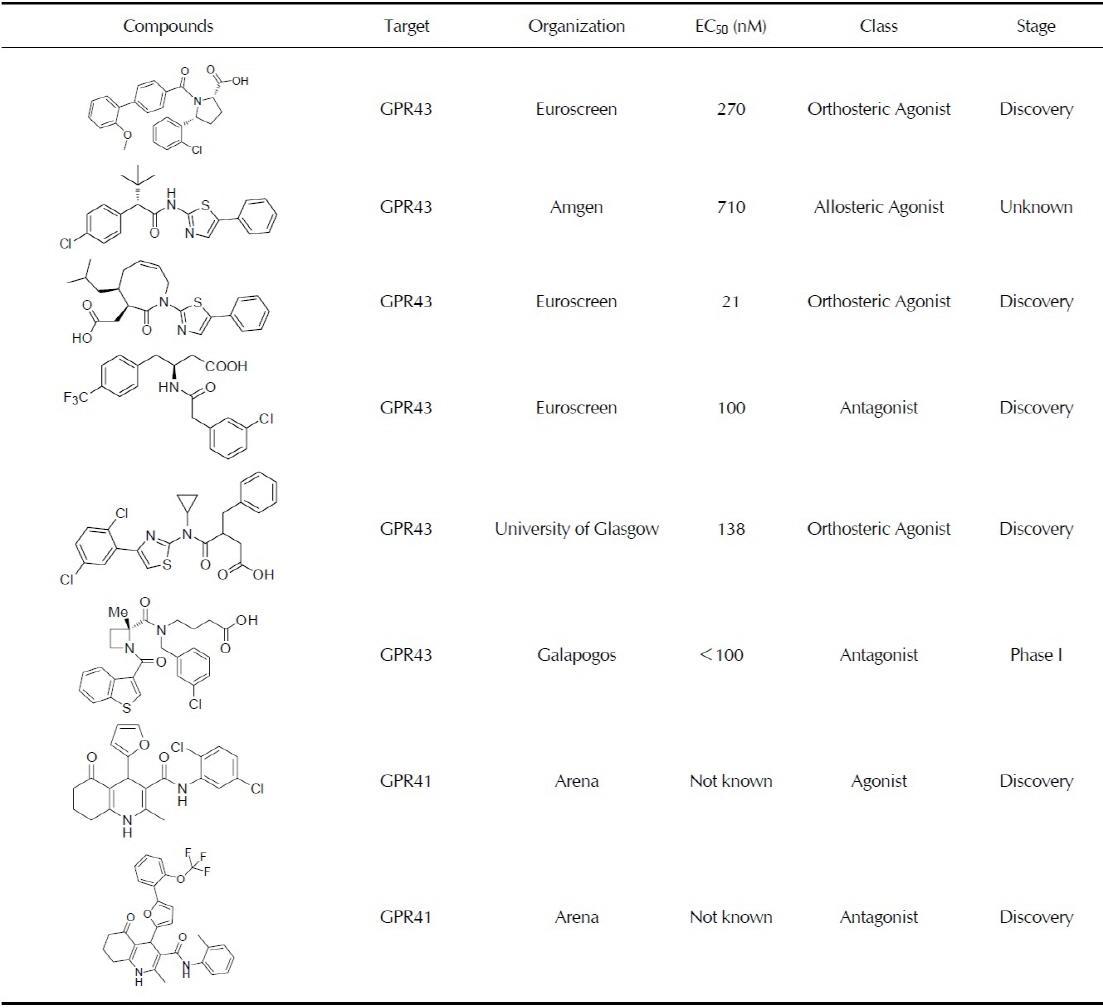 Although there is a variety of evidence indicating that GPR41 and GPR43 are involved in disease-relevant physiological processes such as lipolysis, adipogenesis, hormone secretion, and inflammation, it remains to be elucidated whether these receptors are valuable drug targets. It is also currently under debate which direction of modulation - agonism vs. antagonism - would yield therapeutic benefits. The question of whether GPR41 and GPR43 are druggable targets is a difficult one. Answers to this would be best provided by more research on the biology of GPR41 and GPR43and the selective potent compounds targeting these receptors.