While single strand DNAs have been widely used for the scaffold of brightly fluorescent silver nanoclusters (Ag NCs), double strand DNAs have not been as successful. Herein, we report a novel synthetic approach for bright Ag NCs using branched double strand DNAs as the scaffolds for synthesis. X-shaped DNA (X-DNA) and Y-shaped DNA (Y-DNA) effectively stabilized Ag NCs, and both X-DNA and Y-DNA resulted in brightly fluorescent Ag NCs. The concentration and molar ratio of silver and DNA were found important for the fluorescence efficiency. The brightest Ag NC with the photoluminescence quantum efficiency of 19.8% was obtained for the reaction condition of 10 X-DNA, 70 silver, and the reaction time of 48 h. The fluorescence lifetime was about 2 ns for the Ag NCs and was also slightly dependent on the synthetic condition. Addition of Cu ions at the Ag NC preparations resulted in the quenching of Ag NC fluorescence, which was different to the brightening cases of single strand DNA stabilized Ag NCs.

Biomolecules such as deoxyribonucleic acid (DNA) have shown huge promise in fabrication and composition of nanostructures and served as a new class of scaffold for nanoparticle syntheses.1 DNA molecules are in the nanometer range, with the DNA chain of width of 2 nm and with one nucleotide being 0.33 nm long.2 In addition, the basepair specificity can drive the self-assembly of DNA sequence into designed nanostructures with sub-nanometer controlled resolution at the simple fabrication, which makes DNA as an attractive template for the synthesis of two- and three-dimensional nanostructures and also for assembling inorganic nanoparticles.3-5 DNA shows high affinity for metal cations, and these localized cations can form seeds for metallic nanoparticles when reduced.67

Regulating size of metal nanoparticles in sub-nanometer range is important in their electronic and optical properties. 89 When metal nanoparticles consist of a few to tens of atoms, their size critically govern the Fermi wavelength of electrons and the band structures become discontinuous.10 These super-small nanoparticles, typically called as nanoclusters (NCs), can interact with light and exhibit intense absorption and emission.1112 In recent times, silver nanoclusters (Ag NCs) have attracted great attention for their high quantum yields (QYs), excellent photostability, and the bioconjugation capability.13 Ag NCs often need scaffolds that provide stability preventing irreversible aggregations and precipitations.14 Polymer,1516 dendrimer,1718 microgel,19 and peptide20 have been used for the scaffolds for Ag NC syntheses. Recently, DNA has been exploited for the scaffold and resulted in Ag NCs that emit from blue to near-infrared wavelengths depending on the sequence assembly.21

Typically, single strand DNAs are used for Ag NC scaffolds because Ag ions are known to bind specifically to the heterocyclic bases of the DNAs and this prevents the clusters from uncontrolled growth to larger silver nanoparticles.22 Recently, it was reported that rod-shaped Ag NC could be stabilized by multi-strand DNA assembly.23 As almost all DNA molecules are either linear or circular, additional shapes of DNA have not been explored for scaffolds for metal NC syntheses. Dendrimer-like DNAs such as X-shaped DNA (X-DNA) and Y-shaped DNA (Y-DNA) have attracted great interest for using DNAs as a generic instead of a genetic material.24,25 These DNA building blocks can be readily incorporated into larger structures in a controlled manner and the controlled assembly is robust and efficient yielding stable and almost monodisperse entities. Herein, we report X-DNA and Y-DNA templated syntheses of Ag NCs and their optical properties. Both branched DNAs served as a good scaffold for Ag NC synthesis with the X-DNA producing slightly brighter Ag NCs than the cases with the YDNA. The branched DNAs can also form hydrogels, which can potentially open ample opportunities for the design considerations.26

The sequences for X-DNA and Y-DNA are shown in Scheme 1. The X-DNA and Y-DNA are composed of 4 and 3 arms, respectively, and the each arm is 6 nm long.24,27 To obtain the composite of Ag NCs and the branched DNA (Ag NCs/DNA), AgNO3 was added to the branched DNA strand solution by typically 6:1 silver ion: branched DNA molar ratio (Ag/DNA ratio) in ammonium acetate buffer. After one hour, this mixture solution was added with NaBH4 (AgNO3: NaBH4 mole ratio typically to be 1:2) and sit in the dark for aging (Scheme 2). During the aging, the absorption and PL spectra were measured to follow the Ag NC/DNA formation. Surfaces of Ag NCs are thought to be passivated by cysteine and guanine double branched strands in the DNA breathing. 23,28 Figure 1(a) and (b) present absorption and PL spectra of Ag NC/X-DNA and Ag NC/Y-DNA. Both showed broad absorption to around 500 nm with a peak at slightly over 400 nm which is presumably originated from the transitions of Ag NCs. Some side products of Ag NPs may have also contributed to the absorption by the surface plasmon resonances. The PL spectra showed typically ~100 nm bandwidth peak centered at around 620 nm. The Ag NC/DNA solutions took the faint tint of yellow color to the eyes and showed orange color fluorescence (Fig. 1(c)). The optical properties indicate that the affinity between the Ag NCs and DNAs may be similar to each other for the two different branched DNAs.28,29

Scheme 2.The synthetic procedure for Ag NC/branched DNAs. After complexation of branched DNA with silver cations, the mixture is reduced with NaBH4. 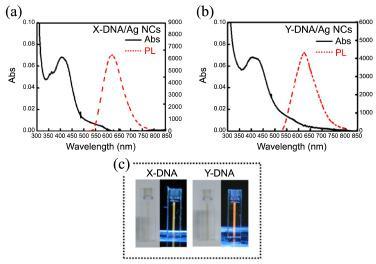 The Ag/DNA ratio and the concentrations at the synthesis can critically determine the resultant Ag NC/DNA products because they can govern the size of the Ag NC and also the interactions between the Ag NC surface and DNA. In order to investigate how the Ag/DNA ratio and their concentrations affect the optical properties of Ag NC/DNA and to find an optimal synthetic condition for bright Ag NC/DNA, a series of syntheses have been performed as varying the synthetic parameters and the PL peaks and QYs were measured (Table 1). Because the QYs sometimes change over time during the aging, the highest QY was recorded at the table for each condition. In the case of Ag NC syntheses using single strand DNAs as the scaffold, the Ag/DNA ratio of 6 to 10 are typically used.28-30 We have varied the Ag/DNA ratio for a broad range from 3.5 to 70. Using too small amount of Ag ions sometimes resulted in no optically detectable Ag NCs, and it was recorded as “No rxn” at the Table 1. 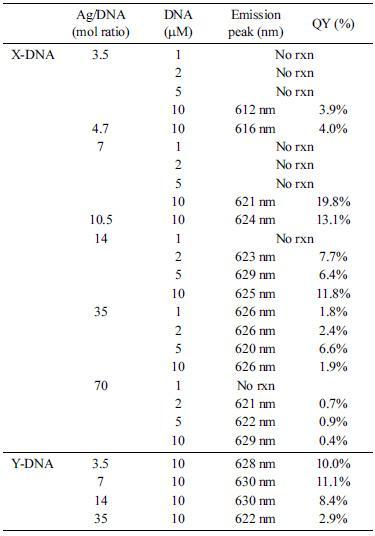 Linear duplex DNAs are typically known not to produce fluorescent Ag NCs when used for the scaffold. According to circular dichroism studies, both single-stranded and doublestranded DNAs can be bound with Ag ions and exhibit similar perturbation of the bases.29 However, Watson-Crick base pairing is thought to result in almost negligible fluorescence from the Ag ions or Ag NCs at the duplex.28 In other words, single-stranded DNAs can have the conformational flexibility to stabilize fluorescent Ag NCs.31 Double stranded DNAs with nucleotide mutation or mismatch have been typically used for the scaffold of Ag NC/DNA to render inaccessible base pairing.28 The X-DNA and Y-DNA are double-stranded with all accessible base pairings, however they are branched and the junctions of the branch may have provided the conformational flexibility for bright Ag NC/ DNAs. Y-DNA is relatively less branched with 3 arms than X-DNA which has 4 arms. This may have resulted in less bright Ag NC/Y-DNA when compared with Ag NC/X-DNA for the samples prepared by similar synthetic conditions.

PL lifetime was measured for three Ag NC/X-DNA samples prepared by the Ag/DNA concentrations of 70/10, 105/10, and 140/10 μM/μM. The three samples showed the bright PL QYs of 19.8, 13.1, and 11.8%, respectively, and their PL lifetimes were 2.16, 1.99, and 1.94 ns, respectively. The sample prepared with higher Ag ion concentration showed the brighter PL QY and slightly longer PL lifetime. The DNA is considered to act as the stabilizer and reduce nonradiative decay channels.32 The brighter Ag NC/DNA sample seems to be more passivated by DNA, which resulted in longer PL lifetime by efficiently reduce the non-radiative recombination rate. 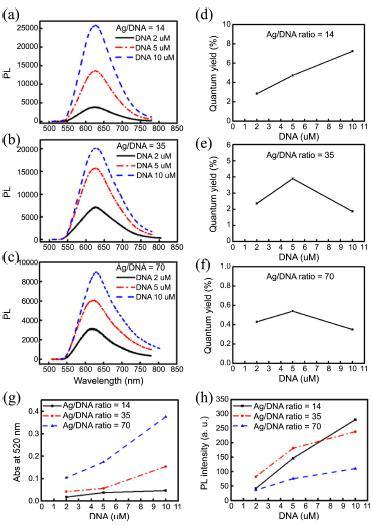 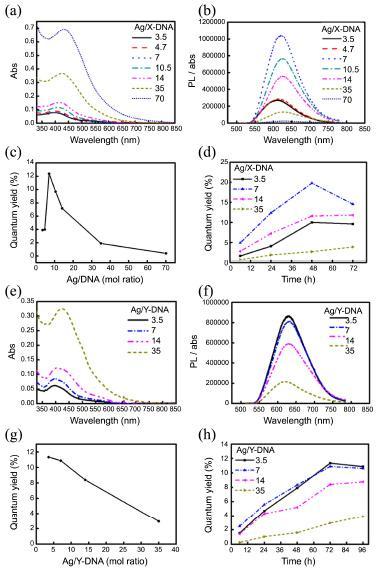 The concentration was matched for all the cases to be 10 μM DNA. Absorption and emission profiles remained mostly unchanged by the reaction time (or aging), however the fluorescence intensity was quite dependent on the reaction time. QYs were measured at the reaction time of 24 h (Fig. 3(c)) To further follow time evolutions of QY, the QYs have been monitored up to 72 h (Fig. 3(d)). For the most of the samples, the QYs increased till 48 h by aging and began to slightly decrease. The highest QY was obtained as 19.8% when the Ag/DNA ratio was 7. Similar experiments have been repeated for Ag NC/Y-DNAs. The DNA concentration was again matched to be 10 μM, and the Ag/DNA ratio has been varied from 3.5, 7, 14, to 35. The absorption and emission spectra and the QYs were recorded at 72 hrs (Fig. 3(e)-(f)). When compared with the X-DNA cases, the YDNA scaffold cases showed slower reactions. The time evolutions of QYs for the Ag NC/Y-DNAs have been followed up to 96 h. For most of the cases, the highest QYs were obtained at 72 h. When used for the Ag NC synthesis scaffolds, single strand DNAs typically show the highest PL QY at the reaction time of 24 h.28 Our branched DNAs exhibited slower reaction time for the bright Ag NCs when compared with the single strand DNAs. It can be hypothesized that the interaction between Ag ions and base pairs of double strand DNAs are more restricted and thus slower than the ones with single strand DNAs. In addition, our YDNA has 108 base pairs whereas the X-DNA does 144. This smaller number of base pair of Y-DNA may have resulted in the slower reactions for the Ag NCs. The brightest Ag NC/ Y-DNA showed the PL QY of 11.1%.

Our results suggest that Ag NCs can be effectively synthesized and stabilized by branched DNAs. The PL QY of Ag NC/DNA approached almost 20%. It is well known that Ag ions form relatively strong binding with cysteines and guanines.28 Cu ion and Ag ion are known to have competitive interactions for bases of DNA. We added Cu ions to the Ag NC/X-DNA reaction solution and observed the PL change. The synthetic condition for the brightest Ag NC/XDNA (10 μM DNA with the Ag/DNA ratio of 7) was adopted. 20 μM Cu(NO3)2·3H2O was added at the reaction time of 30 mins or at 24 h and the PL spectra were recorded (Fig. 4). For single-stranded DNA scaffolded Ag NCs, addition of Cu ions sometimes results in the brightening of the NC PL.33 The copper ion addition at 30 mins resulted in complete quenching of the PL. The addition at 24 h led to significant reduction in the PL intensity. However, no noticeable change has been observed for the PL peak position or shape (Fig. 4(b)).

Different affinities of Ag ions for different bases would determine the color of Ag NC/DNA. In addressing the origin of our Ag NC/DNA emission, it is expected the cysteine and guanine composition ratio of the branched DNA to be important. For example, Werner group reported that hybridization of guanine-rich tail showed red fluorescence from DNA duplex scaffolded Ag NCs. Increasing the guanine content has been reported to enhance the number of Ag NCs with “turn on” state.34 Hybridized DNA duplexes with extra six-base cytosine loops were reported to induce the Ag NC fluoresce of yellow emission when used for the scaffold.35 Both our X-DNA and Y-DNA have the same cysteine and guanine composition ratio of 55.6%. This may have originated the similar PL peak position and shape for the Ag NC/ X-DNA and Ag NC/Y-DNA.

We have used, for the first time to the best of authors’ knowledge, branched double strand DNAs for the scaffold of Ag NC syntheses. Linear duplex DNAs typically fail to stabilize bright Ag NCs. To the contrary, our branched DNAs were able to stabilize Ag NCs with the PL QY up to nearly 20%. The brightest Ag NC was obtained for the reaction conditions of 10 μM X-DNA and 70 μM Ag ions at the reaction time of 48 h. Addition of Cu ions resulted in the quenching of Ag NC PL, which was different to the brightening cases of single strand DNA stabilized Ag NCs.