Influence of Electrolyte Composition on Electrochemical Performance of Li-S Cells

The electrochemical performance of Li-S cells was investigated in various ternary electrolyte solutions composed of 1,2-dimethoxyethane (DME), tetra(ethylene glycol) dimethyl ether (TGM), and 1,3-dioxolane (DOX). The discharge capacity values and cycle data obtained at each composition were statistically treated with the Minitab program to obtain mixture contour plots, from which the optimal composition of the ternary solvent systems was predicted. The discharge capacities and capacity retention were quite dependent on the electrolyte composition. It was estimated from the contour plots of the capacity at 1.0 C that the discharge capacity sharply increased with a decrease in the TGM content. High capacities greater than 900 mAh/g at 1.0 C were expected for the electrolyte composition with a volume ratio of DME/TGM/DOX = 1/0/1. In contrast, it was predicted from the mixture contour plot of the capacity retention that the cycle performance would significantly increase with an increase in the DME content.

Over the past 15 years, ambient-temperature lithiumsulfur (Li-S) batteries with sulfur-based composite cathodes have been repositioned as the next generation of lithiumbased secondary batteries due to their tremendous theoretical capacity (1675 mAh/g-sulfur).1-4 The redox mechanism of a sulfur cathode is quite different from that of conventional lithium-ion batteries (LIBs). In LIBs, the redox reactions of the cathode (e.g., LiCoO2) and anode (e.g., graphite) are commonly based on the intercalation of lithium ions into the solid host materials. Structural changes do not occur as a result of this intercalation, except for slight changes in lattice parameters. In contrast, the charge (electron) transfer process of a sulfur cathode can be described by interfacial electrochemistry, such as the redox flow cell of a V2+/V3+ couple. Redox species such as S8 and polysulfides (e.g., S82−, S3−, S32−) exist in electrolyte solutions and participate in electrode reactions occurring at the electrode/electrolyte interface.5-8 The dissolution of polysulfides is inevitable and essential to the normal operation of Li-S batteries. For this reason, electrodes (e.g., carbon) with a large surface area and good conductivity are required for the facile redox reactions of S8/S82− and S3−/S32− couples. In addition, it would be very desirable for the enhancement of the cycle life to delicately design the structure of the cathode to confine polysulfides (Sn2− or Sn−) generated during charge/discharge cycles within a specific space, such as a cathode. However, an approach based on using carbon-sulfur composites to provide close electrical contact between sulfur and carbon or on searching for electrolyte systems with low polysulfide solubility would be not effective. In fact, in the late 1990s, the PolyPlus battery company presented a breakthrough for high-capacity Li-S cells operating at ambient temperature with glymebased electrolytes, which exhibit excellent levels of solubility for polysulfides.9 This breakthrough triggered many researchers and manufacturers to participate in the development of Li-S batteries. In the early 2000s, Samsung SDI attempted to develop high-capacity Li-S batteries for mobile IT devices through collaboration with the PolyPlus battery company but failed to commercialize the batteries due to the poor cycle properties of sulfur cathodes and lithium anodes. In general, the physicochemical properties of polysulfides, such as their electrochemical reactions, chemical reactivity with lithium metal, solubility, viscosity, and diffusion coefficients, are critically dependent on the nature of the electrolyte systems in which they are immersed.10-13 As a result, the electrochemical properties of Li-S batteries are greatly influenced by the electrolyte system employed. Although various electrolyte systems, including ionic liquids, have been developed,14-16 the glyme/1,3-dioxolane-based solvent systems presented by the PolyPlus battery company have been widely used due to their considerable advantages, such as high capacity, strong cycling properties, and high rate capabilities.17,18 Recently, some additives, such as ionic liquids and LiNO3, have been developed to increase the cycle performance of Li-S batteries.11,12,19,20 It was reported that the cycle properties and coulombic efficiency were dramatically enhanced by the addition of LiNO3 to liquid electrolytes. 19,20 To date, various glymes (CH3O(CH2CH2O)nCH3), including 1,2-dimethoxyethane (DME, monoglyme), di(ethylene glycol) dimethyl ether (DGM, diglyme), and tetra(ethylene glycol) dimethyl ether (TGM, tetraglyme), have been studied in combination with 1,3-dioxolane (DOX), which is known to form a stable passive film on lithium metal surfaces.21 We postulated that mixed electrolyte systems may have an optimal composition such as that of lithium-ion batteries, which are composed of a linear carbonate and a cyclic carbonate solvent. In this work, the electrochemical performance of Li-S cells in ternary electrolyte systems containing DME, TGM, and DOX was investigated. DME (Mw = 90.1 g/mol) with a low viscosity (η = 0.455 cP at 25 ℃) was chosen as a representative low-molecular-weight glyme solvent. In contrast, TGM (Mw = 222.3 g/mol) with a high viscosity (η = 4.05 cP at 25 ℃), which is known to provide a high discharge capacity, was selected as a representative high-molecular-weight glyme solvent.17 Data for the cycle performance and discharge capacities at various C rates were obtained for ten different electrolyte compositions and examined by using a statistical approach that has been frequently used to optimize products in the private sector.

The sulfur cathodes were composed of 65 wt % elemental sulfur as an active material, 15 wt % Ketjenblack as an inert electrode, and 20 wt % polyethylene oxide (Mw = 1,000,000) as a binder. The three materials were mixed with an acetonitrile solvent by a ball-milling method to create a slurry mixture with an appropriate viscosity. Sulfur cathodes were produced by casting the mixture slurry on a carbon-coated aluminum current collector by the doctor blade method. The average loading level of sulfur was 2 mg/cm2. The sulfur cathodes were dried at 60 ℃ under vacuum for more than 6 h before assembly. Lithium metal foil was used as an anode to assemble CR2016 coin cells in an argon-filled glove box. After removing water with molecular sieves, 1,2-dimethoxyethane (DME, monoglyme), tetra(ethylene glycol) dimethyl ether (TGM, tetraglyme), and 1,3-dioxolane (DOX) were used as organic solvents for the ternary electrolyte systems. The volumetric ratios of the three solvents for the ten electrolyte compositions presented in Table 1 were designed with the mixture DOE (design of experiments) tool of the Minitab program (ver. 16). Ten electrolytes with different compositions were prepared by dissolving 1 M LiN(CF3SO2)2 (LiTFSI) and 0.1 M LiNO3 in each solution. Charge/discharge tests of the Li-S cells with different electrolyte compositions were performed in the voltage range of 1.8-2.7 V versus Li/Li+ at 25 ℃. The discharge rates of Li-S cells were sequentially changed for the four initial cycles (0.1 C → 0.2 C → 0.5 C → 1.0 C), whereas the charge rate was fixed at 0.2 C (1.0 C = 838 mA/g-sulfur). The specific energy for the test cells was calculated based on the weight of elemental sulfur by considering the cell voltage and capacity of the discharge curves. Thereafter, practical cycle tests were performed from the fifth cycle for 40 additional cycles at a fixed charge/discharge rate of 0.5 C. In this work, the fifth cycle was defined as the first cycle of the cycle performance tests. The capacity values obtained at various C rates, specific energy, and cycle performance data at each composition were systematically handled by using statistical software (Minitab program, ver. 16) to predict the optimal composition of the ternary system.

Table 1.aVolumetric ratio of the ternary systems consisting of DME, TGM, and DOX. bSpecific energy calculated from the discharge curve obtained at 1.0 C. 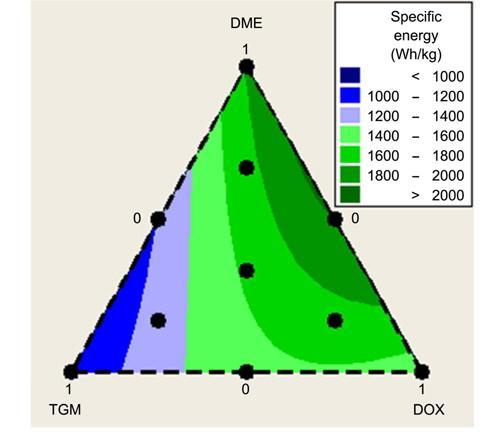 Table 2.Summary of the discharge capacities with cycle number and capacity retention at the 40th cycle at each electrolyte composition 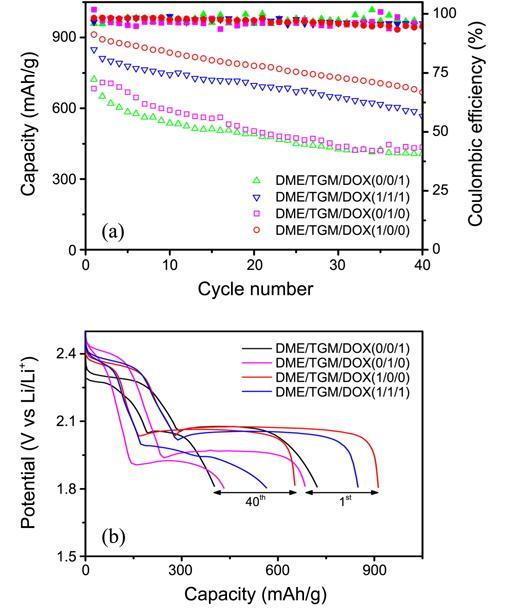 Figure 4.(a) Cycle performance of Li-S cells with different electrolyte solutions. (b) Typical discharge curves obtained at the 1st and 40th cycles. 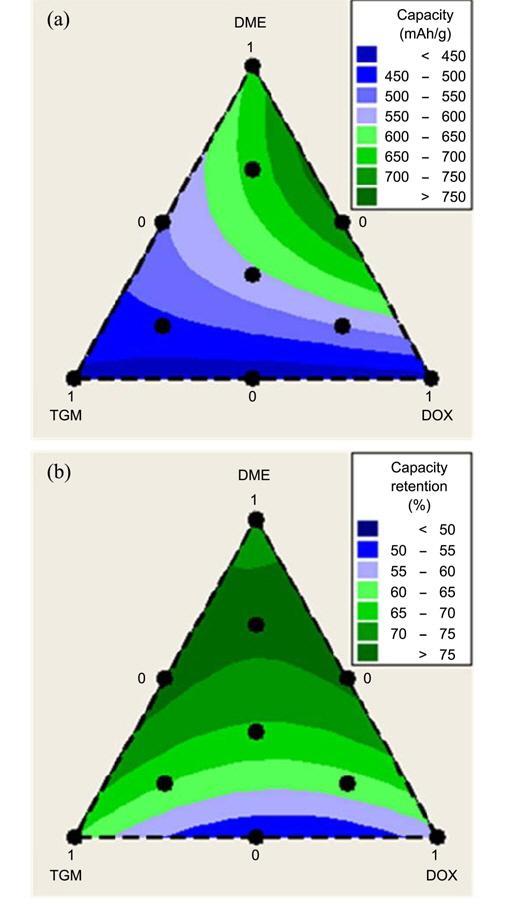 The discharge performance of Li-S cells was investigated for ten different electrolyte solutions containing DME, TGM, or DOX. Data regarding discharge characteristics such as capacity, specific energy, and capacity retention with cycling were analyzed statistically using the mixture DOE (design of experiment) tool of the Minitab program to obtain mixture contour plots of the discharge characteristics and to predict the optimal composition of the ternary solvent system. The statistical analysis yielded the following important results: 1) In general, the discharge capacities at a high C rate of 1.0 C were inversely proportional to the TGM content. 2) Huge capacities greater than 900 mAh/g, even at 1.0 C, were predicted for the electrolyte composition of 1/0/1 (v/v) DME/ TGM/DOX. 3) The capacity retention with cycling increased significantly with the DME content. The overall results indicate that when considering the capacity in conjunction with the C rate, specific energy, and cycle properties, the optimal composition of the ternary systems is 0.5-0.8 DME; 0.0-0.1 TGM; and 0.2-0.5 DOX. The statistical approach used in this work can be extended to determine the optimal composition of various electrode materials or composite cathodes and can be applied to other mixed electrolyte systems.