Journal of Microbiology and Biotechnology

Avascular necrosis of the femoral head (ANFH) is commonly observed in patients treated with excessive glucocorticoid (GC). Single administration of lipopolysaccharide (LPS) has shown to induce immune stimulatory factors. However, the effect of repeated administration of LPS on GC-induced ANFH has not been studied. Thus, the purpose of this study was (i) to examine the cytokine profile induced by repeated LPS administrations and (ii) to test the effect of repeated LPS treatments on GC-induced ANFH. A mouse necrosis model of ANFH was designed by chronic GC administration with co-treatment of LPS. Mice body weights in the LPS/prednisolone (PDN) co-treated group were lower than that of the untreated control group, but spleen weights were greater than the control group. The levels of IL-6, , and IL-33 in the liver and spleen of the LPS/PDN group were lower than the untreated control group, whereas level in the femoral head of the LPS/PDN group increased. Collectively, the effect of repeated LPS on the pathogenesis of GC-induced ANFH was associated with the level in the femoral head, but the pathogenesis did not correspond to cytokine levels in immune tissues.

Avascular necrosis, also called aseptic necrosis and osteonecrosis, of the femoral head (ANFH) is defined as cellular death of bone components in the femoral head due to an insufficient blood supply [19, 22, 23]. There are various non-traumatic risk factors of ANFH, including vascular compression, hypertension, thrombosis, alcoholism, chemotherapy, and excessive glucocorticoid (GC) treatment [2, 8, 17, 25, 36]. The underlying mechanisms remain unclear, although chronic GC treatment is a common cause of non-traumatic ANFH [21].

There are various hypotheses to explain the impact of GC on ANFH and these hypotheses are interpreted as direct and indirect effects. Previous studies suggest the direct effect of GC on cellular components in bone and on the suppression of precursor osteoblast/osteoclast production, including osteocyte and endothelial cell apoptosis [3]. Osteoclast regulatory factors are important for osteoclast differentiation and lifespan extension of osteoblasts, which are the origin of osteoclasts [3, 39]. In the indirect effect of GC on ANFH, GC may cause hypertension through pathways other than nitric oxide-redox imbalance and their interaction with arachidonic acid metabolism [31]. Elevated blood pressure may increase the risk of clot formation [20]. The inhibition of angiogenesis and nitric oxide metabolism could be mechanisms through which GC causes ANFH [16]. GC also causes ischemia through vasoconstriction and decreased blood flow to the femoral head by elevating the level of adipogenesis and fat hypertrophy in the bone marrow [21]. In addition, ANFH is caused by the stimulation of parathyroid hormone and a reduction of gonadal hormone production after chronic treatment of GC [9].

GC is a potent inhibitor of nuclear factor-κB (NF-κB) activation, which modifies the pivotal mediator of innate and adaptive immunity [30]. Repeated GC administrations suppress the production of interleukin-1β (IL-1β), tumor necrosis factor α (TNFα), interleukin-6 (IL-6), granulocyte-macrophage colony-stimulating factor (GM-CSF), and many other chemokines, whereas GC treatment activates the Fas signal pathway, which is one of the best characterized apoptotic pathways [24].

In contrast to GC, lipopolysaccharides (LPSs), which are the outer membrane component of gram-negative bacteria, strongly activate the innate immune system [1]. LPS binds to the CD14/TLR4/MD2 receptor complex, which promotes the activation of many transcription factors, including NF-κB [38]. In this mechanism, the systemic stimulation of the vigorous immune system results in the release of various inflammatory mediators such as TNFα and IL-6 [26]. LPS and TNFα are local bone-resorbing agents by producing IL-6 from osteoblasts [15]. IL-6 not only inhibits osteoblastic cell differentiation [18] but also stimulates osteoclastogenesis and bone resorption [28].

LPS tolerance was initially described where mice survived a lethal dose of bacterial LPS if they had been previously treated with a sublethal injection. In mouse models, two phases of LPS tolerance are described; an early phase associated with altered cellular activation, and a late phase associated with the development of specific antibodies against the polysaccharide side chain of gram-negative organisms. The LPS-tolerant phenotype is characterized by inhibition of LPS-mediated TNFα, suppressed IL-1 and IL-6 release, enhanced cyclooxygenase-2 activity, inhibition of mitogen-activated protein kinase activation, or impaired NF-κB nucleus translocation [7, 40].

GC and LPS enhance the occurrence of ANFH, but they have counter immune responses. Therefore, we examined whether the LPS-mediated immune responses enhance the development of GC-induced ANFH. To confirm our hypothesis, we separated BALB/c mice into 4 groups; phosphate-buffered saline (PBS), LPS, prednisolone (PDN), and PDN/LPS groups. We analyzed the body weights, cytokine levels, and also tissue histology. The results demonstrated that the mice in the PDN/LPS group had increased development of ANFH compared with the PDNtreated mice. The enhanced LPS effect on the pathogenesis of GC-induced ANFH does not correspond to cytokine expression levels in immune tissues.

Female BALB/cAnN/CrljBgi mice were purchased from Orient Bio (Gyunggi-do, Korea). The mice were identified by ear punching, and housed 3 to 4 per cage in standard micro isolator cages in a specific-pathogen-free condition. Mice were given free access to a standard diet and water. The lighting was regulated with 12 h of brightness and 12 h of darkness. All animal procedures were reviewed and approved by the Konkuk University Animal Care Committee.

Mice were separated into 4 groups; PBS treatment, LPS (Sigma-Aldrich Co., St. Louis, MO, USA) treatment, PDN (Reyon Pharmaceutical Co., Ltd., Seoul, Korea) treatment, and PDN/LPS groups (n = 7 per group). The LPS group was injected with LPS (1 mg/kg) by intraperitoneal (IP) injection. The PDN group was injected with PDN (100 mg/kg) by intramuscular (IM) injection. Control group mice were injected with a comparable volume of PBS. A second injection was given 1 week after the first injection, and injections were continued every 3 days until day 24. Mice were sacrificed by carbon dioxide (CO2) narcosis at day 27 for cytokine measurement and histological analysis. Body weights were measured before every injection. A change in body weight was calculated by the percentage change from the initial weight. Spleens were weighed after sacrification. A difference in spleen weight was calculated by the percentage to the body weight.

The proximal part of femurs were fixed for 1 day in PBS containing 4% paraformaldehyde and were decalcified at 1 week with 0.5 M EDTA, pH 8.0. After tissue processing, bones were embedded in paraffin and cut with a rotary microtome at 10 mm. Sections were stained with hematoxylin and eosin. The histomorphological examination was done with an upright microscope and microscopic image processing and analysis software from analySIS TS Auto with Olympus (Tokyo, Japan). 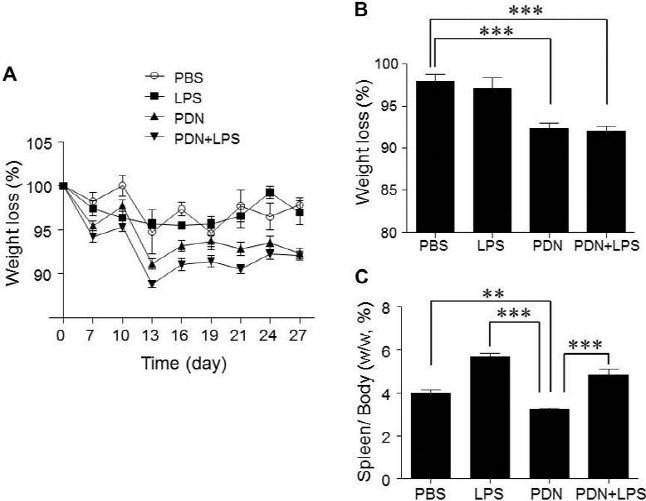 The induction of cytokines during ANFH development was determined with liver and spleen lysates at day 27. We examined IL-6 and TNFα production using ELISA (Fig. 2). The levels of IL-6 in liver in the PDN and LPS/PDN groups were lower than levels in the PBS control group (Fig. 2A). The IL-6 levels in the spleens of the mice in the LPS and LPS/PDN groups were also lower than in the PBS control group; however, there was no statistical significance (Fig. 2B). TNFα also showed a similar pattern and the reduction was more effective than IL-6 production. TNFα was decreased in the LPS group when compared with the PBS control group (Figs. 2C/2D). PDN treatment reduced TNFα production in both the liver and spleen, but there was no significance. 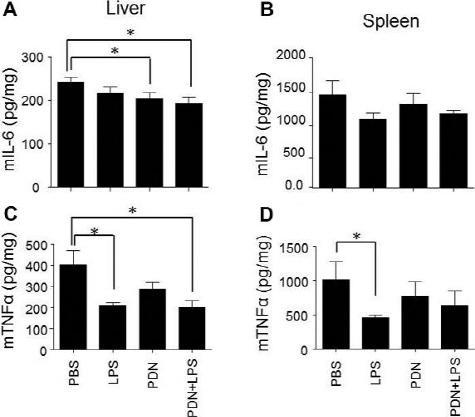 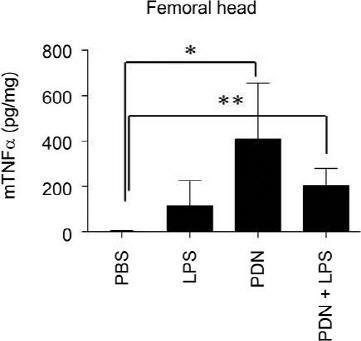 Unlike other cytokines, IL-33 levels in both the liver and spleen of mice in the LPS group were higher when compared with levels in the PBS control and the PDN group by western blot (Fig. 3). LPS/PDN decreased IL-33 expression effectively compared with LPS alone in liver (Fig. 3A), whereas PDN treatment did not influence LPS-induced IL-33 expression (Fig. 3B). We measured TNFα in the femoral head, and interestingly, TNFα levels increased in the LPS, PDN, and LPS/PDN groups (Fig. 4); statistical significance was observed in the PDN and LPS/PDN groups, but not in the LPS group. We examined IL-6 by ELISA and IL-33 by western blot, but neither of these cytokines was detected in the femoral head (data not shown).

For evaluation of ANFH, histological analyses were performed (Fig. 5). At low magnification, we found thickened bone trabeculae (arrow) and relatively decreased bone marrow in the PDN and PDN/LPS groups (Figs. 5C and 5D). In addition, the epiphyseal plates of the PDN and PDN/LPS groups had degenerated (Figs. 5C and 5D) compared with the PBS and LPS groups (Figs. 5A and 5B). At high magnification, degenerated epiphyseal plates (arrow head) were observed clearly (Figs. 5G and 5H). The epiphyseal plate of the PDN/LPS group was more marked than those treated with PDN alone. The thicknesses and density decreased (arrow in Figs. 5A-5H) and destructed. The numbers of lacuna also decreased; this is indicated by the arrowhead (Figs. 5E-5H).

Body weight is a simple method to evaluate the effect of the GC drug. We found a significant decrease in measured body weight in the PDN group and PDN/LPS group. GC is known to induce catabolic effects in body proteins [14]. Therefore, the weight loss indicates GC’s effects on the physiology of the mice. The spleen is the major filter organ for circulating antigens in the blood stream, including LPS. The GC administration caused atrophy of the spleen by immune cell apoptosis [32]. Contrastingly, the LPS administration caused the enlargement of the spleen by macrophage activation and leukocyte infiltration [13]. At day 27 after repeated administration of PDN and LPS, the body and spleen weights of the PDN treatment group were lower than those of the PBS treatment group (Fig. 1). The spleen weights of the LPS group and PDN/LPS group increased, but the body weights of mice in the PDN/LPS group were lower than LPS alone. This result indicates that PDN and LPS change the spleen weight at the same time (Fig. 1C).

TNFα and IL-6 are representative inflammatory cytokines that are released by LPS [26]. The TNFα is quickly induced and reaches its peak within 1.5 h after LPS injection. IL-6 is expressed after TNFα induction and peaks about 3h after LPS injection [37]. We made an effort to set a chronic inflammation condition and expected that the levels of inflammatory cytokines would be elevated in the LPS treatment group compared with the PBS control group. However, the levels of inflammatory cytokines in the LPS group were lower than the levels in the PBS group (Fig. 2). This result suggested that repeated chronic LPS treatment caused immune suppression, which may worsen the development of ANFH induced by PDN (Fig. 5).

A sublethal challenge of LPS in the mouse leads to a desensitized immune system, resulting in weak immune response by the next injection of LPS. This phenomenon is defined as LPS tolerance [5]. The mechanisms of LPS tolerance involve many factors, such as signal transduction molecules, cytokines, suppressor of cytokine signaling proteins (SOCS), T-regulatory (T-reg) cells, heat shock proteins, heme oxygenase, and LPS receptor. A previous study has described the immune responses to LPS by secretion of various inflammatory cytokines [26]; however, one of the well-known characteristics of LPS tolerance is suppression of inflammatory cytokine induction [10]. GC induces anti-inflammatory Th2-type cytokine expression rather than inflammatory Th1-type cytokine expression. As shown in Fig. 3, Th2-type cytokine IL-33 was increased in the liver and spleen. This phenomenon shows the effects of GC: inhibition of Th1-type cells and activation of Th2-type cells [6, 11, 12]. The present study suggests that decreased inflammatory cytokines by LPS tolerance in immune tissues further enhance the development of ANFH induced by PDN.