Rotator Cuff Tear is a result of normal aging process and occurred more frequently in aged population and people getting involved in sports activitied [1], and one of the most common diseases that cause pain in shoulder blade and dysfunction in daily activities [2]. This condition is not life-threatening by rupture, but causes considerable pain, weakens muscle, and restrains movement [3].

Rotator Cuff Tear is caused by multiple factors or complex causes [1] and does not show any symptoms and breaks out without pain, and there are one or more discontinuities in muscle or tendon, and may be a result of more-than-one-year degeneration and external injury. This may appear as a result of progression of injury like impingement syndrome [4]. If rotator cuff tear occurs, the upper side of the shoulder is crepitant during passive motion of shoulder, and the passive motion is mostly normal, but active motion is limited, and it causes sleep disorder due to severe hypnalgia, which disrupts daily activity [5].

Of rotator cuff tear muscles, supraspinous muscle and infraspinous muscle are the important muscles which are responsible for shoulder stability and motion while performing tasks or involving various activities [6], and in case of supraspinous muscle tear, there appears to be a reduction in extension of shoulder joint and in upward rotation of shoulder bone due to excessive upward glide of the head of humerus and pain occurred when raising the shoulder joint initially [7], and in case of infraspinous muscle tear, the head of humerus is abnormally located [8] and thus shows abnormal pattern in moving shoulder because of loss in the process that force is generated [9]. Such false patterns cause fatigue in the surrounding muscles and may transform the suppression of central activity in the nervous system and thus appropriate treatment is necessary [10].

The conservative treatment method of rotator cuff tear includes drug therapy like painkiller and anti-inflammatory drugs for relieving pain, changes in way of living, and physical therapy. Despite such non-surgical treatment, symptoms may last for 4 to 6 months, and in this case, surgical treatment is used [11]. If surgical treatment is performed, Arthroscopic Salvage Repair among the surgical trearments is preferred [12], and the advantages of such an arthroscopic surgery include inspection of glenohumeral joint without separating deltoid muscle, capability of solution of lesions in internal joints, and small portion of incision that leads to small damages to soft tissue and little surgery scar and pain after surgery which leads to quick rehabilitation and functional recovery, and in terms of patient's satisfaction, it shows an excellent result [13].

Patients who received a rotator cuff muscle repair indicated that muscular activity weakened in lower extremities even with no weight bearing because the surgical site was fixated and it brought about changes in myotility [14], and Downie and Miller [15] reported that after repair, tendon and muscular atrophy increased the fatigue in the surrounding muscles over time.

Muscle fatigue hinders daily life movement and maintenance of maximum muscular contraction, damages to inputting feedback on proprioceptive sense and vision, and makes it difficult to keep a stable posture [16]. Muscular contraction is a process that the nerve action potential occurred from the cerebrum is conveyed to the extremities through the nervous system before generating muscular action potential, which is conveyed to the skeletal muscle tissue [17], and if sources of energy cannot be provided during muscular contraction for such reasons like insufficient oxygen supply into the muscle, depletion of major metabolites including source of energy, and accumulation of metabolites [18]. Scholtes et al. [19] reported that as patients who had disease suffered from high muscular fatigue, alleviation of their muscular fatigue contributed greatly to the treatment of lesions, and as therapeutic method, remedial exercise can relieve such symptoms [20]. After repair, the most commonly used remedial exercise in physical therapy department is a continuous passive shoulder joint motion, and this exercise can treat and prevent movement of tendon surface and spread of synovia at rapid rate [21] and after surgery, continuous passive shoulder joint motion should be performed to prevent stiffness of joint, protect tendon in rotator cuff, alleviate pain, and recover functions [22].

Generally, in measuring muscle fatigue, Likert scale, muscle biopsy, biochemical marker, electromyography(EMG), and many other methods have been used [23], but electromyography(EMG) has been used as a powerful tool to analyze the muscular activity related to the motion of shoulder joint [24]. The frequency spectrum of signal is expressed as fatigue evaluation scale such as mean power frequency and median frequency(MDF) and in particular, mean power frequency(MDF) is considered to be a good scale that reflects the frequency variation in electromyogram [25], and it is observed that the higher the muscular fatigue is, the low frequency range is reinforced [26]. This can be described as a reliable method in measuring because median frequency data can be obtained at a certain cycle as it is a value that can be obtained through power spectrum analysis from EMG signal obtained in experiment and with this value, muscular fatigue can be identified objectively.

Therefore, this study aims to identify the impact of tendon and muscular atrophy caused by fixation after rotator cuff repair on fatigue of surrounding muscles over time and present a foundation for studying efficient remedial exercises.

Research subjects were the patients who had received a infraspinous muscle repair due to lesions caused by infraspinatus tendon 2-degree tear and injury in right rotator cuff (dominant in right side) at M hospital located at Cheonnam province from July 2012 to March 2013 and who showed no neurological symptoms and musculoskeletal disorders and deformities except lesions, had no pain in right upper limbs and hand, and indicated no motor disturbance. There were a total of 32 patients (24 males and 8 females) who were aged 40 - 60 years old. They could receive outpatient treatment on a regular basis after leaving the hospital. They could understand the purpose of this study and agreed to participate in the experiment Table 1.

Research participants were asked to straighten their upper body in a specifically designed chair the previous day before reconstruction operation. They were supported with a prop when they were bending their shoulder joint by 90° on the affected side, extending their elbow joint as fully as possible, and neutralizing their lower arms. They used a handgrip and concentrated strength to their utmost for 5 seconds. At this time, the median frequency value of infraspinous muscle, supraspinous muscle, serratus anterior muscle or median deltoid muscle was measured with an surface electromyogram for a preliminary inspection. After three days of repair, continuous passive motion(CPM), which is generally performed to maintain the range of joint and enhance the recovery speed when soft tissue became stiff in patients was carried out for 30 minutes, once a day and five times a week: for three weeks in total. Post-inspection was measured similarly to the preliminary inspection.

During motion, participants straightened their upper body sitting at a continuous shoulder-joint motion apparatus and extended their shoulder joint 0°, extended their elbow joint as fully as possible, raised their forearms when turning upside down so that shoulder joint could be bent 30°-40°, and increased the extent of bending by 5°-10° on a daily basis without causing pain. The continuous shoulder-joint motion was performed at the slowest rate under strict supervision of physical therapist: once a day, five days a week, 30 minutes per session, for three weeks.

As data processing method for this study, Window SPSS 17.0 was used. Descriptive statistics was used for comparing the homogeneity of general characteristics in research subjects, and paired t-test was used to identify the changes in median frequency within the group. For comparing the changes in median frequency in muscles, One-way ANOVA was used. As post hoc, Tukey was used and the significance level was set at α=.05. 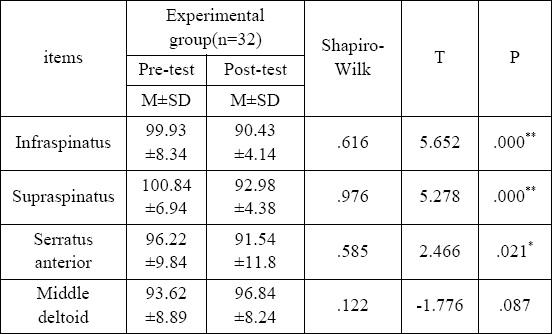 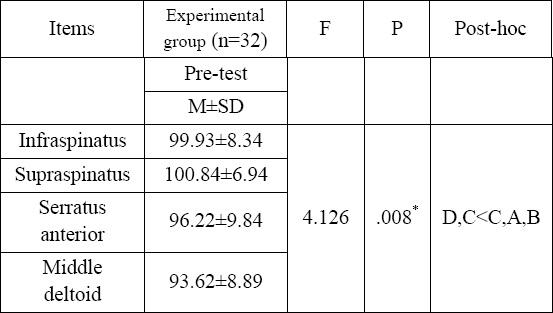 As a result of post hoc on the changes in median frequency in muscles before repair, such a change in the middle deltoid muscle appeared smaller than that of the supraspinous muscle Table 3. 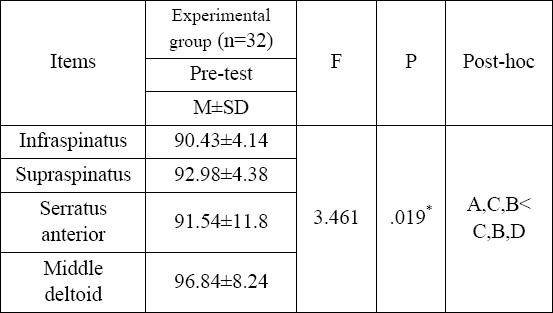 As a result of post hoc on the changes in median frequency in muscles before repair, such a change in the infraspinous muscle appeared smaller than that of the middle deltoid muscle Table 4.

With the recent development of medical diagnostic technique, it is known that muscular skeletal patients increase due to various sociocultural factors and patients with shoulder-related disease is increasing rapidly. In particular, rotator cuff tear occurs most frequently. This rotator cuff tear is accompanied by reduction in the range of motions in joints, generally due to pain around shoulder, muscular atrophy, severe weakness and stiffness [27]. So, after repair, patients need to maintain about six-week fixation using ultra-sling for arms, in order to limit active motion [28]. However, it is said that such a fixation causes muscular activity in muscles surrounding the repaired portion and brings about changes in myotilty [14]. If muscular activity is reduced, it is closely related to muscle fatigue and this affects median frequency value because EMG spectrum can be shifted if there are changes in the width in measuring EMG [29]. Therefore, this study aimed to measure EMG signals around the muscles surrounding shoulder during fixation by aid before and after repair in patients who received a rotator cuff repair, identify the impact of muscles on muscular fatigue. This also presents a foundation for studying efficient remedial exercises in patients who would receive a repair in the future.

It is reported that reduction in median frequency in muscles around shoulder after rotator cuff repair indicates reduction in maximum voluntary contraction in maintaining muscular activity [37], and such weakness in mobilizing motor units causes reduction in muscular activity because loss of network of excitement between spinal segment motor neurons and interneurons from cerebral nerves causes reduction in threshold value of force and adjustment [34]. The characteristics of activity in motor units do not change in general, but among motor units, type I fiber appears from the range of low frequency and type II fiber appears from the range of high frequency because it is mobilized more rapidly when generating a higher and stronger force. Therefore, it is considered that due to fixation after repair, low average frequency values in muscles around shoulder appeared in the range of relatively lower frequency because of low excitement rate and discontinuous contraction of mobilized units and middle deltoid muscle appeared in the range of relatively higher frequency rate compared to the other muscles because of removable extending aid and so it seems to be necessary to develop remedial exercise program in the order of supraspinous muscle, serratus anterior muscle, and infraspinous muscle utilizing middle deltoid muscle with the least muscular fatigue in a 3-week rehabilitation process.

Therefore, as shown in previous research indicating that the phenomenon of median frequency value being changed from range of high frequency to that of low frequency is suggestive of muscular fatigue, this study also shows that the median frequency value shifted from high frequency to low frequency (low frequency shifting) as a result of analyzing the changes in median frequency value, using EMG spectrum of muscles around shoulder in patients after fixating the repaired portion by performing continuous shoulder joint passive motion, an exercise method of 3-week general rehabilitation at a physical therapy room after repair and wearing aid. Therefore, such findings obtained from EMG spectrum analysis after repair are considered to be a big help for developing efficient remedial exercise program.

Therefore, it is desirable to study the development of efficient remedial exercise program interventions in the order of supraspinous muscle, serratus anterior muscle, and infraspinous muscle by utilizing middle deltoid muscle with the least muscular fatigue in 3-week rehabilitation process in patients who received rotator cuff repair at clinical settings.