Tunable solid state laser materials in the near-infrared spectral range are interesting for a variety of applications, for instance, displays technology, medicine and spectroscopy.1 2,2-Dimethyl-1,3-propanediamine (Me2tn) is a bidentate ligand that can coordinate to the central metal ion by forming six-membered chelate ring with a chair conformation. The [Cr(Me2tn)2X2]n+(X = monodentate) cation can adopt either the trans or the cis geometry. In addition, two different kinds of conformation with respect to the chelate rings of Me2tn are seen in the trans isomer. The carbon atoms of the two chelate rings of the two conformers may be on the same side (syn conformer) or on the opposite side (anti conformer) of the coordination plane. In the case of trans-anti/syn-[Cr(Me2tn)2Cl2]Cl, trans-anti/syn- [Cr(Me2tn)2Br2]2Br2⋅HClO4⋅H2O and trans-anti/syn-[Cr(Me2tn)2 Br2]Br, independent syn and anti conformational isomers were found within the same crystals.2−4 However, structural analyses of trans-anti-[Cr(Me2tn)2(NCS)2]NCS⋅0.5H2O, trans-anti-[Cr(Me2tn)2Cl2]ClO4, and trans-anti-[Cr(Me2tn)2Cl2]2 ZnCl4 indicated that two chelate rings of Me2tn ligands were only in the anti chair-chair conformation.5−8 The different conformations of the two six-membered chelate rings of Me2tn ligands may be dependent on the crystallographic disorder, packing forces, hydrated molecules and counter anions in the crystals. The factors which determine the stability of these geometric conformations are subtle and complicated.2−8

The preparation and characterization of novel chromium (III) systems have received much attention in recent years because chromium(III)-doped crystals are promising materials for tunable solid state lasers in the spectral region between 600 and 1100 nm.9 As a prerequisite for these applications, a detailed study of the spectroscopic and ligand field properties is needed. It has been recognized that the intraconfiguration d−d transitions may be useful to determine metal-ligand bonding property as well as molecular geometry.10−19 In particular, the sharp-line splitting and its pattern are very sensitive to the exact bond angles around the metal. Thus it is possible to extract geometric information from the electronic spectroscopy in noncrystalline environments.20,21

Previously, we have described concerning synthesis and conformational structure of the trans-anti-[Cr(Me2tn)2 (OH)(H2O)](ClO4)2 (Scheme 1).22 It indicated that the chromium atom was in a distorted octahedral environment, coordinated by two bidentate, 2,2-dimethyl-1,3-propanediamine ligands and two O atoms of hydroxy group and water molecule in trans position. The average Cr−N(Me2tn) and Cr−O bonds were 2.086 (2) and 1.907 (9) Å, respectively. The carbon atoms of the two Me2tn chelate rings in the complex adopted a stable anti conformation on the coordination plane not including syn conformer. However, the detailed IR and electronic absorption spectral properties have not been published yet. In this study, the four electronic bands due to spin-allowed transitions were assigned. Using the observed electronic transitions, a ligand field analysis was performed to determine the metal-ligand bonding properties for the coordinated atoms toward chromium (III).

Caution! Although we experienced no difficulty with the perchlorate salt described in this study, the compound is potentially explosive, and should be handled with very great care.

The room-temperature visible absorption spectrum was recorded on a HP 8453 diode array spectrophotometer. The mid-infrared spectrum was obtained on a Mattson Infinities series FT-IR spectrometer using a KBr pellet. Analyses for C, H, and N were carried out on a Carlo Erba 1108 elemental analyzer. 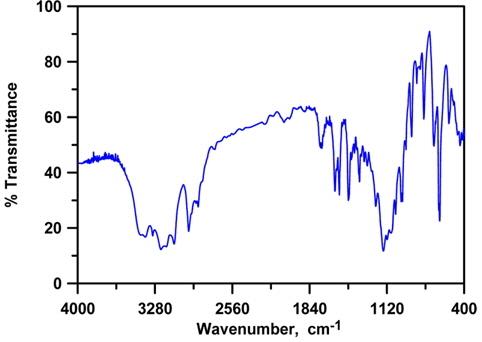 Two intense bands at 3423 and 3371 cm−1 are assigned to the asymmetric and symmetric stretching vibrations, ν(O−H) of hydroxy group and water molecule. The broadness of these bands indicates that hydrogen bonds are present in this structure complex. The infrared spectrum shows strong bands in the region 3100−3300 cm−1 and 2800−3000 cm−1 due to the symmetric and antisymmetric N−H and C−H stretching modes, respectively. The assignment of NH2 and CH2 deformations follows the frequency sequence proposed for some chromium(III) complexes according to which these vibrational modes have the energetic order31

Two strong absorption bands at 1604 and 1563 cm−1, and the single band at 1479 cm−1 can be assigned to NH2 and CH2 bending modes, respectively. Medium to weak absorptions in the region 1260−1390 cm−1 can be assigned to the symmetric NH2 deformation and the ring C−C stretching mode, respectively. The strong absorption at 1038 cm−1 may be assigned to CH2 twisting mode. It has been suggested that the cis isomer exhibits at least three bands in the 830−890 cm−1 region due to the NH2 rocking mode while the methylene vibration splits into two peaks in the 760−830 cm−1 region. However, the trans isomer shows two groups of bands, one band near 890 cm−1 arising from the amine vibration and a doublet near 800 cm−1 due mainly to the methylene vibration.2,4,5 The title complex exhibits two bands at 889 and 841 cm−1 in the NH2 rocking frequency region. The CH2 rocking bands at 775 cm−1 are observed. The absorption positions of bending (δ), wagging (ω), twisting (γ) and rocking (ρ) bands of NH2 and CH2 deformations are not significantly affected by differing counter anions. The very strong absorptions at 1081 cm−1 and 627 cm−1 are assigned to δ(ClO4−) and νas (ClO) of the ionic perchlorate.17,24 The broadening or split of the perchlorate peaks results from the reduction in the symmetry of the ClO4− ion to C3v or C2v due to its interaction with the amine hydrogen atoms and the formation of partial H−bonding. The metal-ligand stretching and ring-deformation bands occur in the far infrared range. The two strong peaks at 460 and 428 cm−1 can be assigned to the Cr−N stretching modes. The infrared spectral properties of the new complex would strongly support the assignment of the trans configurational geometry, but the spectroscopic data do not give any evidence whether trans-[Cr(Me2tn)2 (OH)(H2O)](ClO4)2 has the syn or anti conformation of the two six-membered chelate rings.

The assignment of the geometrical configuration of some chromium(III) complexes with mixed ligands can be suggested by inspection of the d−d absorption spectra.10−15 The position of the spin-allowed transitions in the electronic spectra, the number of bands, and their extinction coefficients are usually reliable indicators for distinguishing the trans and cis isomers. Electronic absorption spectroscopy of a tetragonally distorted chromium(III) complexes is revealing, with significant splitting under the 4A2g→4T2g envelope occurring for the trans geometrical isomers, but small or undetected splitting observed for the cis isomers. In general, the trans chromium(III) complexes with two monodentate and two diamine ligands that are more symmetrical have three bands in the visible region, and these bands are located at higher wavelengths and have lower extinction coefficients than those of the less symmetrical cis isomers. The visible absorption spectrum (solid line) of trans-[Cr(Me2tn)2(OH)(H2O)](ClO4)2 in aqueous solution at room temperature is presented in Fig. 2.

It exhibits two main bands, one at 19 920 cm−1 (ν1), and the other at 24 890 cm−1 (ν2), corresponding to the 4A2g→4T2g and 4A2g→4T1g (Oh) transitions, respectively. The 4A2g→4T1g (4P) transition corresponds to a higher energy range, and could not be observed under our experimental condition. The third band (ν3) may be obscured by the charge-transfer and ligand-specific transition bands. The one quartet band shows an asymmetric profile and has a shoulder at 17360 cm−1. This is indicative of the trans configuration. In order to have some point of reference for the splitting of the bands, we have fitted the band profiles using four Gaussian curves, as shown in Fig. 2. A deconvolution procedure on the experimental band pattern yielded maxima at 18 115, 21 095, 25 000 and 28 250 cm−1 for the non-cubic (D4h) split levels of 4T2g and 4T1g (Oh), respectively. These deconvoluted band positions were used as the observed spin-allowed transition energies in the ligand field calculation. 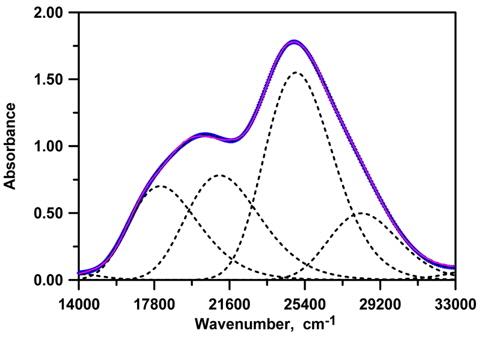 The ligand field analysis was carried out through an optimized fit of experimental to calculated transition energies using the AOMX program.25 The ligand field potential matrix was generated for trans-[Cr(Me2tn)2(OH)(H2O)]2+ from the coordinated four primary amine nitrogen atoms of the Me2tn and the two oxygen atoms of hydroxy group and water molecule. Throughout the ligand field optimization, we assumed the D4h tetragonal symmetry for the title complex. In the framework of the angular overlap model the metal-ligand interactions are described in terms of localized bonding parameters of σ- and π-type. The parameters that were varied during the optimization were the interelectronic repulsion parameter B plus the AOM parameters eσ(O) and eπ(O) of hydroxy group and water molecule for the oxygen-chromium interaction, and eσ(N) for the Me2tn nitrogen-chromium interaction. The π-interaction of the hydroxy group and water molecule with the metal ion was considered to be isotropic.

The π-interaction of amine nitrogen with sp3 hybridization in the Me2tn ligand was assumed to be negligible. However, it is worth nothing that peptide nitrogen with sp2 hybridization has a weak π-donor character.26,27 The results of the optimization and the parameter set used to generate the best-fit energies (cm−1) are listed in Table 1. The following values were finally obtained for the ligand field parameters: eσ(N) = 7032; eσ(O) = 7367; eπ(O) = 1735 and B = 685 cm−1. The AOM parameters are reasonable and reproduce the absorption spectrum well. The eσ(N) value for primary amine nitrogen is slightly smaller than expected. Table 2 contains the comparison of the AOM parameters with the values reported in the literature2,6,28,29 for the trans- [Cr(Me2tn)2XY] n+ with neutral and anionic ligands. A ligand field analysis of the solution absorption spectrum indicates that the hydroxy group and water molecule are much stronger σ- and π-donor than chloride, bromide or isothiocyanate. The four nitrogen atoms of the two bidentate Me2tn ligand have still strong σ-donor characteristics toward chromium(III) but it is smaller than those of other amines.

The values for eσ(O) and eσ(O) are comparable to the values for various ligands.30−34 The value of the Racah parameter B is about 75% of the value for a free chromium (III) ion in the gas phase. These factors as well as the AOM parameters can be used in determining the labilization modes of the photoreaction in the chromium(III) complexes and in predicting the relative efficiency of the 3d–4f energy transfer in heterometal dinuclear complexes.35,36

The infrared and UV-visible absorption spectra of trans-[Cr(Me2tn)2(OH)(H2O)](ClO4)2 have been measured. The four electronic bands due to spin-allowed transitions were assigned. Using the observed electronic transitions, a ligand field analysis was performed in the framework of the angular overlap model. The resolved band maxima of the electronic d−d spectrum were fitted with a secular determinant for a quartet energy state of the d3 configuration in a tetragonal field including configurational but neglecting spin-orbit coupling. It was confirmed that the nitrogen atoms of the Me2tn ligand were a strong σ-donor character, and the oxygen atoms of OH or H2O have strong σ- and π-donor properties toward the chromium (III).