The Transactions of The Korean Institute of Electrical Engineers (전기학회논문지)

This paper considers the problem of sampled-data control for continuous linear parameter varying (LPV) systems. It is assumed that the sampling periods are arbitrarily varying but bounded. Based on the input delay approach, the sampled-data control LPV system is transformed into a continuous time-delay LPV system. Some less conservative stabilization results represented by LMI (Linear Matrix Inequality) are obtained by using the Lyapunov-Krasovskii functional method and the reciprocally combination approach. The proposed method for the designed gain matrix should guarantee asymptotic stability and a specified level of performance on the closed-loop hybrid system. Numerical examples are presented to demonstrate the effectiveness and the improvement of the proposed method.

Linear parameter-varying (LPV) systems have been received consideration attention due to the fact that LPV models are useful to describe the dynamics of linear systems affected by time-varying parameters as well as to represent nonlinear systems in terms of a family of linear models. Time delays often appear in many physical, biological and engineering systems, and the existence of time delay may cause instability. Therefore, the stability analysis and controller design problem of delayed LPV systems have been received considerable attention by man researchers[1-6]. The results of stabilization and controller design of time delay systems can be classified into two types: delay-independent and delay-dependent results. It is well known that the delay dependent results are less conservative than delay-independent ones.

Because of the rapid growth of the digital hardware technologies, the sampled-data control systems, where the control signals are kept constant during the sampling period and are allowed to change only at the sampling instant, has been more important than other control approaches. Thus, many important and essential results have been reported in the literature over the past decades[7-14]. The authors in [13] have investigated the sampled-data control for LPV system. Furthermore, the sampled-data control of the delayed LPV systems have been studied in [14]. The shortcoming of the method utilized in [13, 14] is that Jenson Inequality was employed to obtain the condition for the controller design. Recently, a lower bound lemma[15], which can get less conservative results compared with only using Jenson inequality, was proposed. Thus, it remains a space to further improve the results reported in [13, 14], which motivates this work.

The main focus of the present work is to examine the sampled-data control design for LPV systems. We propose a method for the design of sampled-data controllers for LPV systems using a parameter-independent state feedback law. The proposed design method guarantees asymptotic stability and optimized energy-to-energy gain of the closed-loop system from disturbance input to the system output. The criteria for the existence of the controllers are derived in terms of LMI (Linear Matrix Inequality). Compared with the result obtained in [13, 14], less conservative results are obtained by using new Lyapunov-Krasovskii functional and reciprocally convex approach[15]. By means of numerical simulations, it is shown that the proposed results are effective and can significantly improve the existing ones.

The rest of this paper is organized as follows. Section II provides the problem statement and preliminary. Section III presents main results for the derived sufficient conditions in terms of LMIs. Section IV shows simulation results to demonstrate its effectiveness of the proposed method. Finally, Section V concludes this paper with a summarization.

where x(t) ∈Rn is the state vector, z(t) ∈Rn is the vector of controlled outputs, is exogenous disturbance vector containing both process and measurement noise with finite energy and is the control input vector. The system matrices A( · ), Ah( · ), B1( · ), B2( · ), C( · ), Ch( · ), D1( · ), D2( · ) are real continuous functions of a time varying parameter vector and of appropriate trajectories defined as

where C(R, Rs) is the set of continuous-time functions from R to Rs , and are non-negative numbers. The constraints in (3) imply that the parameter trajectories and their variations are bounded. The time varying delay satisfies

In this paper, the control signal is assumed to be generated by using a zero-order-hold (ZOH) with a sequence of hold times

Also, the sampling is not required to be periodic, and the only assumption is that the distance between any two consecutive sampling instants is less than a given bound[11]. Specially, it is assumed that

2) For some positive scalar γ the following condition holds

In this section, we present the stability and H∞ norm performance condition for delayed LPV systems by deriving a set of linear matrix inequality conditions.

Further, the sampled-data controller gain matrix in (2) is given by K = MG−1

Now, calculating the time derivative of V(t) along the solution of

Since and by employing Jensen’s inequality[13, 14] and the reciprocally convex combination technique[15], one can obtain

On the other hand, according to (1), for any appropriately dimensioned matrix G and scalars λ1, λ2, λ3 the following equation holds:

By Schur complement, is equivalent to

When Ah = Ch = 0 , then the system (1) reduces to the following system without time delay

Let V4= V5= V6=0. By using a method similar to the one employed in the proof of Theorem 1, we have the following corollary.

Further, the sampled-data controller gain matrix in (2) is given by K= MG−1.

Remark 1 In Theorem 1 and Corollary 1, to find a solution satisfying LMI conditions for all parameters in the set of Eq.(3), a parameter grid method is applied for the LPV system which is a bounded function of a scheduling parameter vector. The grid LPV synthesis method has been successfully applied to synthesis controllers for systems with measurable parameters which is in a bounded set[14]. Also, we choose the constant matrix in the constructed Lyapunov functional and the controller gain matrix. If is a continuously differentiable matrix function in (8) or K is parameter-dependent functional, it can be easily derived in the extended results using the similar method in [13, 14].

Remark 2. Compared with the results obtained in [13, 14], the derived results in this paper can have better performance and larger sampling period, which relies on the constructed Lyapunov functional and the method of estimation of its derivative. On one hand, V2(t) and V4(t) are considered in this paper while these term are neglected in [13] and [14]. On the other hand, reciprocally convex approach[15], which is provided more tighter than the ones based on Jensens inequality, is employed to estimate the upper bound of the derivative of Lyapunov function V3(t) and V6(t).

In this section, two numerical examples will be given to demonstrate the effectiveness of the proposed method.

Example 1 This example is motivated by the control of chattering during the milling process[14]. The dynamical equations of the system is

Consider the state vector as , the state matrices corresponding time-delay LPV plant to be controlled are as follows

With the above controller gain, taking ω(t)=(sint)e −10t , Fig 1 shows the simulation results, indicating the displacement of the cutter x1 and that of the spindle x2 for a predefined text condition. it is apparent that the proposed controller attenuates the disturbance successfully under the variable rotational speed. The control effort required for this study is shown in Fig. 2. It is obvious that the results of the present paper yield a much smoother control effort.

Fig. 1State response of the delayed LPV systems in Example 1.

In the model shown above, the sine term is assumed to be an LPV parameter, whose functional representation is not known a priori but can be measured in real time. Defining ρ(t) = sin(0.2t), it can be seen that an LPV state-space representation with the parameter space ρ∈[−1,1] . As pointed out in [13], the optimal value γ is quite sensitive to the scalars λ1, λ2 and λ3 . Taking λ1 = 1.6, λ2 = 1, λ3 = 2, Table 1 show the a comparison of the H∞ norms obtained. This indicates that the derived result in this paper is less conservative. When h=0.1, γ=0.194, solving the LMIs in Corollary 1, we can obtain the controller gain matrix as

With the above controller gain, taking ω(t) = sin(sint)e−10t , Fig 3 and Fig 4 present the simulation result of the state response and control input of this example.

Fig. 3State response of the delayed LPV systems in Example 2. 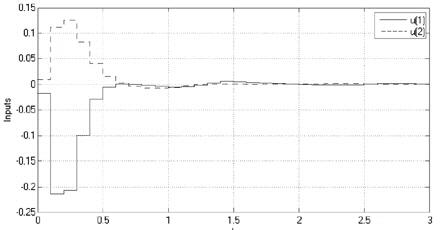 This paper proposed a sampled-data control design for a continuous-time LPV system. By using a reciprocally convex approach, the obtained results are less conservative than the existing ones in the literatures. The proposed method guarantees asymptotic stability and optimized energy-to-energy gain of the closed-loop system from disturbance input to the system output. Finally, we demonstrate the effectiveness of the proposed method using two examples.