We prepared a novel electrochemical gas sensor (EG sensor) based on interdigitated electrode (IDE) coated with vinyl ionic liquids (ILs) as electrolyte and Pt-Ru-Mo/MWNT electrocatalysts for occurring redox-active of CNCl gas. The vinyl ILs such as 1-butyl-3-(vinylbenzyl)imidazolium chloride, , and 3-hexyl-1-vinylimidazolium bromide, , were synthesized by reaction in order to use electrolyte. The Pt-Ru-Mo/MWNT electrocatalysts were also prepared by one-step radiation-induced reduction of metal ions in the presence of MWNTs as supports. The fabricated EG sensor with vinyl ILs electrolyte was evaluated through optical microscopy (OM), scanning electron microscopy (SEM), and atomic force microscopy (AFM). The prepared EG sensor is clearly detected over 2.0 ppm CNCl gas and is exhibited a liner relationship between current and concentration over a region of 10-100 ppm.

Cyanogen chloride (CNCl) gas is a highly toxic blood agent, and was once proposed for use in chemical warfare. It causes immediate injury upon contact with the eyes or respiratory organs. Symptoms of exposure may include drowsiness, rhinorrhea (runny nose), sore throat, coughing, confusion, nausea, vomiting, and edema, loss of consciousness, convulsions, paralysis, and death. It is especially dangerous because it is capable of penetrating the filters in gas masks, according to chemical analysts. In order to prepare the poison gas protection network system from poison gas terrorism, an inexpensive electrical signal-type poison gas sensor with sensitivity, stability, and selectivity is required.

CNCl gases have been detected using color change according to the modified Kønig reaction until now as the following reaction1:

On the other hand, ionic liquids (ILs) are liquid salts with the melting point close to or below room temperature. They are composed of two asymmetrical ions of opposite charges that only loosely fit together (usually bulky organic cations and smaller anions). The good solvating properties, high conductivity, non-volatility, low toxicity, large electrochemical window, and good electrochemical stability, make ILs suitable for many applications. Recently, novel ion selective sensors,6 gas sensors,7,8 and biosensors9-11 based on ILs have been developed. IL gels12,13 were found to have good biocompatibility with enzymes, proteins and even living cells. However, vinyl ILs and polyvinyl ILs as electrolyte were not studied until now to our knowledge.

In this study, we prepared a novel EG sensor for detection of CNCl gas based on vinyl ILs as electrolyte and Pt-Ru-Mo/MWNT catalysts. Here, two-type vinyl ILs such as 1-butyl-3-(vinylbenzyl)imidazolium chloride, [BVBI]+Cl−, and 3-hexyl-1-vinylimidazolium bromide, [HVI]+Br−, are synthesized by a SN2 reaction. The Pt-Ru-Mo/MWNT catalysts are also prepared by one-step radiation-induced reduction of metal ions in the presence of MWNTs as supports. The fabricated EG sensor is evaluated via optical microscopy (OM), scanning electron microscopy (SEM), and atomic force microscopy (AFM). The detection range of the EG sensor was also evaluated for CNCl gas.

H2PtCl6×H2O (37.5% Pt), RuCl3×H2O (41.0% Ru), MoCl2×H2O (47.4% Mo), LiBF4, vinyl pyrrolidone (VP), 1-butylimidazole, 4-vinylbenzyl chloride, and 1-vinylimidazole, and 1-bromohexane were of analytical reagent grade (Sigma-Aldrich, USA) and used without further purification. MWNTs (CM-95) were supplied by Hanwha Nanotech Co., Ltd (Korea). The standard CNCl gas (100 ppm) was obtained from Korea Research Institute of Standards and Science (KRISS, Daejeon, Korea). Solutions for the experiments were prepared with water purified in a Milli-Q plus water purification system (Millipore Co. Ltd. USA), the final resistance of water was 18.2 MΩcm−1 and degassed prior to each measurement. Other chemicals were of reagent grade.

According to previous papers,2,14 we prepared the Pt-Ru-Mo/MWNT electrocatalysts by radiation-induced reduction. In detail, firstly, MWNT was purified to remove the catalyst and non-crystallized carbon impurities. MWNT was treated with a mixture of H2SO4/HNO3 (3:1 vol%) and MWNT was cut into shorter segments during this purification. The purified MWNT was used as the supporting materials for deposition of Pt-Ru-Mo electrocatalysts. The Pt-Ru-Mo/MWNT catalyst was prepared as follows: H2PtCl6·H2O (0.43 g), RuCl3·H2O (0.41 g), MoCl2·H2O (0.41 g) and VP (0.5 g) was dissolved in a mixture of deionized water (188 mL) and 2-propanol (12.0 mL) added as a radical scavenger. Afterwards, 1.00 g of the purified MWNT support was added to the above solution. The reaction solution was adjusted pH to 9.0 using NaOH. Nitrogen was bubbled for 30 min through the solution to remove oxygen and then irradiated under atmospheric pressure and ambient temperature. A total irradiation dose of 30 kGy (a dose rate = 6.48 × 105 /h) was applied.

2.5. Fabrication of the EG sensor and detection of the poison CNCl gas

Table 1.Preparation condition of the sensing materials for EPG sensor 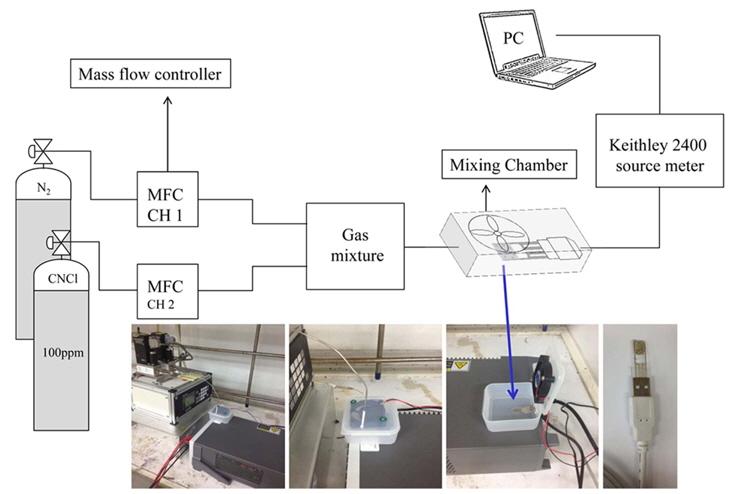 Cyclic voltammetric experiments were firstly performed with a Potentiostat/Gavanostat model 283 (Ametek PAR, U.S.A.) in order to know the redox peak of CNCl gas onto the electrode with electrocatalysts. Experiments were carried out with a conventional three-electrode system. The working electrode was a GC electrode coated with Pt-Ru-Mo/MWNT electrocatalysts, the counter electrode was the platinum wire, and the reference electrode was an Ag/AgCl (sat’d KCl). The structure of the synthesized vinyl ILs was determined by 1H NMR (Inova 600, Varian Co., USA). The surface morphology of the EG sensor was determined by SEM (S-4800, Hitachi Co., Japan), AFM (5420 AFM, Pocotech Co., Korea), and OM (BX60M, Olympus Co., Japan).

3.1. Electrocatalytic efficiency of Pt-Ru-Mo/MWNT to CNCl in [BVBI]+Cl− as electrolytes

Fig. 3 shows the cyclic voltammograms of Pt-Ru-Mo/MWNTs in [BVBI]+Cl− as electrolytes (a) [BVBI]+Cl− containing CNCl gas (b) with scan rate 100 mV/s. There are no redox peaks in [BVBI]+Cl- without CNCl, while the oxidation peak at 0.40 V (vs. Ag/Ag+) and reduction peaks at +0.32 V (vs Ag/Ag+) appeared. These results may be considered as the following redox mechanism of the CNCl gas on the surface of Pt-Ru-Mo/MWNT catalyst: 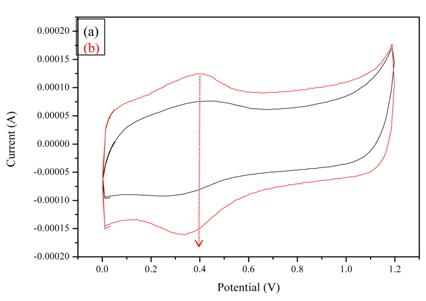 On the other hand, G.D. Allen,15 the oxidation of bromide has been investigated by linear sweep and cyclic voltammetry at the platinum electrode in ILs, 1-butyl-3-methylimidazolium bis(trifluromethylsulfonyl) imide and acetonitrile. He believed that the mechanism is involved in the direct oxidation of bromide to bromine in a heterogeneous step as the following equation: 2Br−→Br2 + 2e−. Based on the above paper, the chloride, Cl−, is easily oxidized on the surface of the Pt-Ru-Mo/MWNT electrode. So, according to Eq. (6), we obtained the oxidation peaks with a fixed potential of +0.40 V across the prepared EG sensor and measured the current against time. 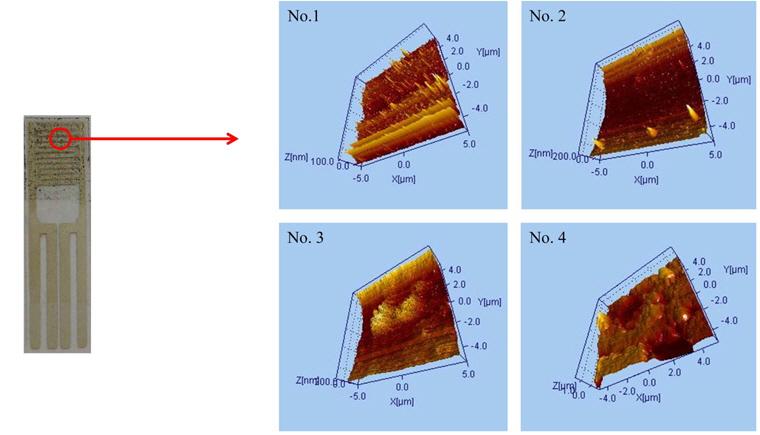 Fig. 4.AFM images of the EPG sensor with Pt-Ru-Mo/MWNT catalysts and vinyl ILs as electrolyte. 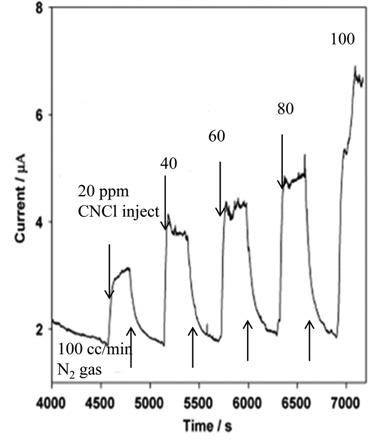 Fig. 6.Sensing data of the CNCl poison gas by EPG sensor at room temperature (No. 1 in Table 1).

In order to know the effects to various electrolytes, the response of the EG sensor (No. 1, 2, 3, and 4) to CNCl gas was performed at room temperature. Fig. 7 shows the response data to CNCl gas between 2~10 ppm by using the EG sensor (No. 1~4) at room temperature. In No. 2 and 4 EG sensors, the CNCl gas was detected on detection limits of 2.0 ppm. These results indicated that the CNCl gas well dissolved in vinyl IL polymer with solid form. The synthesized vinyl ILs polymer can be used as solid electrolyte. 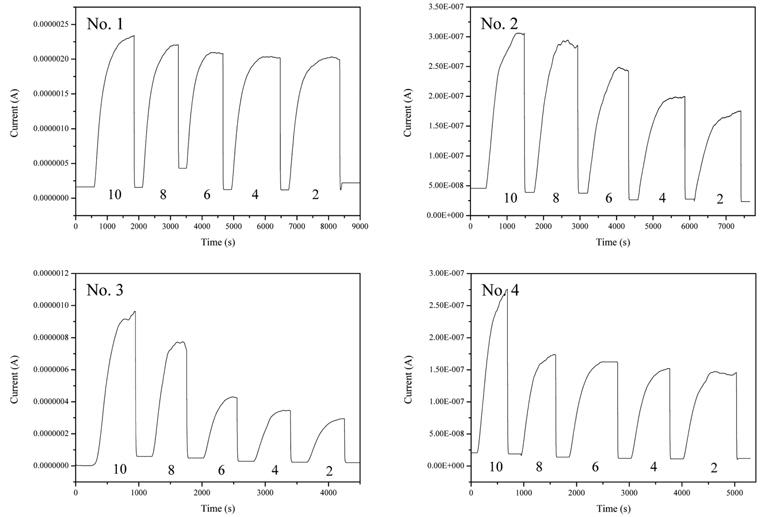 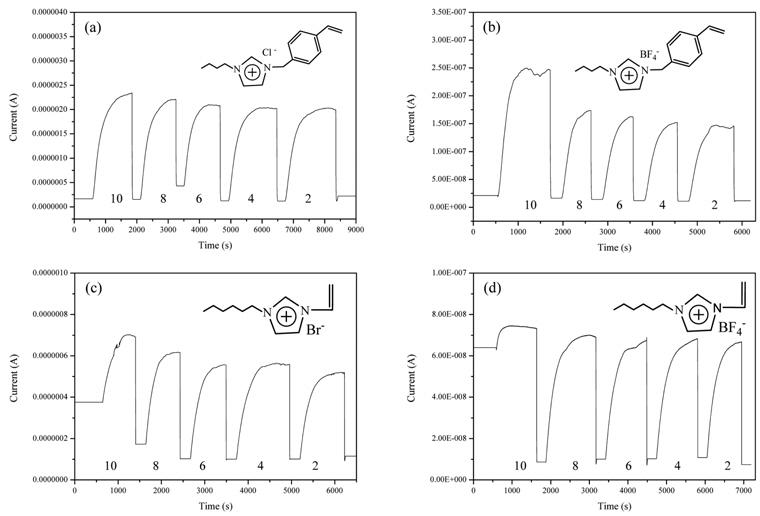