BACKGROUND: Chemical accidents have increased owing to chemical usage, human error and technical failures during the last decades. Many countries have organized supervisory authorities in charge of enforcing related rules and regulations to prevent chemical accidents. A very important part in chemical accidents has been coping with comprehensive first aid tool. Therefore, the present research has provided information with the initial applications concern to the rapid analysis of hazardous material using instruments in vehicle of field mode after chemical accidents. METHODS AND RESULTS: Mobile measurement vehicle was manufactured to obtain information regarding field assessments of chemical accidents. This vehicle was equipped with four instruments including gas chromatography with mass spectrometry (GC/MS), Fourier Transform Infrared Spectroscopy (FT-IR), Ion Chromatography (IC), and UV/Vis spectrometer (UV) to analyses of accident preparedness substances, volatile compounds, and organic gases. Moreover, this work was the first examined the evaluation of applicability for analysis instruments using 20 chemicals in various accident preparedness substances (GC/MS; 6 chemicals, FT-IR; 2 chemicals, IC; 11 chemicals, and UV; 1 chemical) and their calibration curves were obtained with high linearity ( r 2 > 0.991). Our results were observed the advantage of the high chromatographic peak capacity, fast analysis, and good sensitivity as well as resolution. CONCLUSION: When chemical accidents are occurred, the posted measurement vehicle may be utilized as tool an effective for qualitative and quantitative information in the scene of an accident owing to the rapid analysis of hazardous material.

With the remarkable development of Korea’s economy, chemicals have essential materials for agriculture, industry, national productivity and people’s daily life (Chung and Kim, 2009). Specifically, the chemical industry has become one of the important industries concern to the rapid growth of Korean economy life (Chung and Kim, 2009). However, recent surveys have emphasized that chemical materials bring great risks to human health, environment, and safety through chemical accidents or incidents (Fanelli et al., 1980; US-EPA, 1993; Bertazzi et al., 1998; Broughton, 2005). Especially, these substances may cause infection to various diseases, if people are exposed for a long time, even at very low concentrations (Gupta and Verma, 2002). Several countries focused on the chemical safety to strengthen national capabilities through the process of storage, transportation, production, usage, and disposal due to potential hazards during many years (Regulation (EC), 2006; Shi et al., 2014). Moreover, they have established supervisory authorities in charge of enforcing related rules and regulations to prevent chemical accidents (Rosenthal et al., 2006; Wood et al., 2008). Nevertheless, chemical accidents and incidents have increased owing to human error and technical failures during the last decades (Krausmann et al., 2011; Krausmann and Cruz, 2013; Zio and Aven, 2013). For instance, major accidents including Bhopal (India, 1984), Seveso (Italy, 1976), Schweizerhalle (Switzerland, 1986), Toulouse (France, 2001), and Guangxi (China, 2008) were well known due to serious human health and environmental impacts. The chemical accident of Korea (Sep. 27, 2012), spillage of highly toxic hydrofluoric acid was also widely known because of various problems concern to health of local citizens and contamination of crops as well as other plants (Lim and Lee, 2012; Na et al., 2013; An et al., 2015). In other words, this accident was released about 8 tons for transfer from a transporting vehicle to a storage tank through worker’s carelessness (Na et al., 2013; An et al., 2015). The gaseous hydrogen fluoride was proliferated into the atmosphere instantly after the accident and five workers died as well as many local citizens suffered from respiratory irritation problems (Park, 2013; An et al., 2015). Furthermore, Korean government declared the area ‘special disaster zone’ and discarded approximately 9,000 tons of crops and plants (Park, 2013; An et al., 2015). Up to data, under the increasing the use of chemicals, chemical accidents have increased in Korea (2009 : 16, 2010 : 15, 2011 : 12, 2012 : 9, 2013 : 87, and 2014 : 104 cases). On the basis of the above considerations, Korean government suggested safety measures in relation to chemical accident (Chung and Kim, 2009; Shin, 2013). Among numerous measures, the National Institute of Chemical Safety was distributed to mobile measurement vehicle at the six Local Environment Offices with the supports of the Ministry of Environment to field assessments of chemical accidents. This vehicle was designed to obtain information about human health and environmental contamination as the determination of concentration levels of chemicals (focusing on accident preparedness substances having high probability of chemical accident) through on-site analysis.

In the current research, we were the first to organize mobile measurement vehicle together with technical facilities including analysis instrument and sampling as well as preprocessing equipment. Moreover, we evaluated the various accident preparedness substances using analysis instruments as gas chromatography with mass spectrometry (GC/MS), Fourier Transform Infrared Spectroscopy (FT-IR), Ion Chromatography (IC), and UV-Vis spectroscopy in this vehicle.

The two chemical materials using gas-phase FT-IR was analyzed in the 4500-800 cm-1 range using a Hg source, Ge bolometer detector at 4.2 K and add windows. The gas atmosphere in the cell was nitrogen at a pressure of 15 psi at room temperature. The maximum temperature during the measurements was around 1200 K, reached at the end of the run. The spectrum was recorded at a resolution of 1 cm-1 using 120 scans and a 10 L/min gas sample was injected to analyze using diaphragm pump. The separation of IC instrument was achieved using AS18 (250 × 4 mm) and CS12 (250 × 4 mm) to anion and cation materials with 25 μl sample injection volume. The flow rate was 1 ml/min and the column temperature was maintained at 30℃. The mobile phase was composed of 30 mM KOH (anion) and 20 mM MSA (cation) in water. The remaining conditions were programmed as follows : Detector cell heater 35℃, suppressor type SRS, Current 75 mA (anion) 59 mA (cation), CR-TC On. The absorbance of UV-VIS spectroscopy in each cell was measured at 640 nm.

The mobile measurement vehicle for field assessments regarding chemical accidents was supported by the Ministry of Environment. This vehicle is designed to obtain information about environmental concentration and human health impact from the exposure of chemical substances in chemical accidents (Posthuma et al., 2014). Thus, the National Institute of Chemical Safety has organized mobile measurement vehicle by Shin Kwang Technology. As seen for Fig. 1, mobile vehicle was composed of three rooms such as drive & control site, analysis site, and preprocessing site. 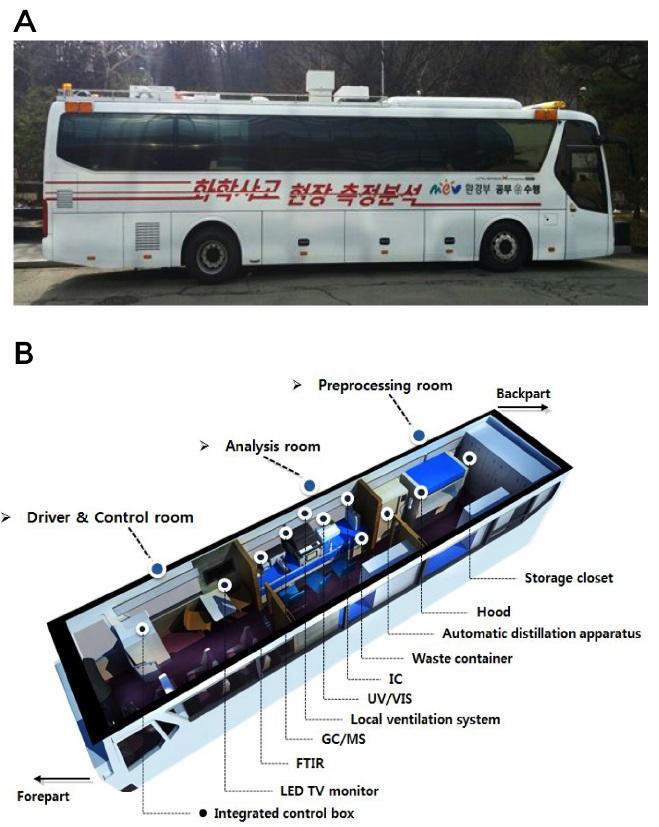 Among them, analysis site comprised of four instruments including GC/MS, FT-IR, IC, and UV-Vis spectroscopy. In the present study, we evaluated 20 accident preparedness substances having high probability of chemical accidents using analysis equipment. Moreover, this work reported for the first time that development of mobile measurement vehicle regarding chemical accidents from the Ministry of Environment in Korea.

To analysis of six chemical materials using GC/MS, calibration curves were prepared by trap time (0.05, 0.2, and 0.5 min) control with three concentrations (17.5, 70, and 175 μg) (Yun and Minyan, 2014). The gas-phase FT-IR was performed with qualitative analysis using two chemicals (Harrison and Clark, 1992). For ion chromatography analysis, the standard stock solutions were prepared using Multi-component Anion Mix 4* and Cation Mix 2* Ion Chromatography standard solutions (each 100 ppm). Calibration curves of anion materials were made by diluting the stock solution with water to five concentrations (1, 5, 10, 15, and 20 μg/mL) (Siriraks and Stillian, 1993). Cation materials were constructed using diluting the stock solution with water to four different concentrations including 1, 3, 5, and 7 μg/mL, respectively (Siriraks and Stillian, 1993). Calibration curve using UV-VIS spectroscopy was made by four concentrations (0.2, 0.4, 0.8, and 1.6 μg/mL) (Mérian et al., 2010). 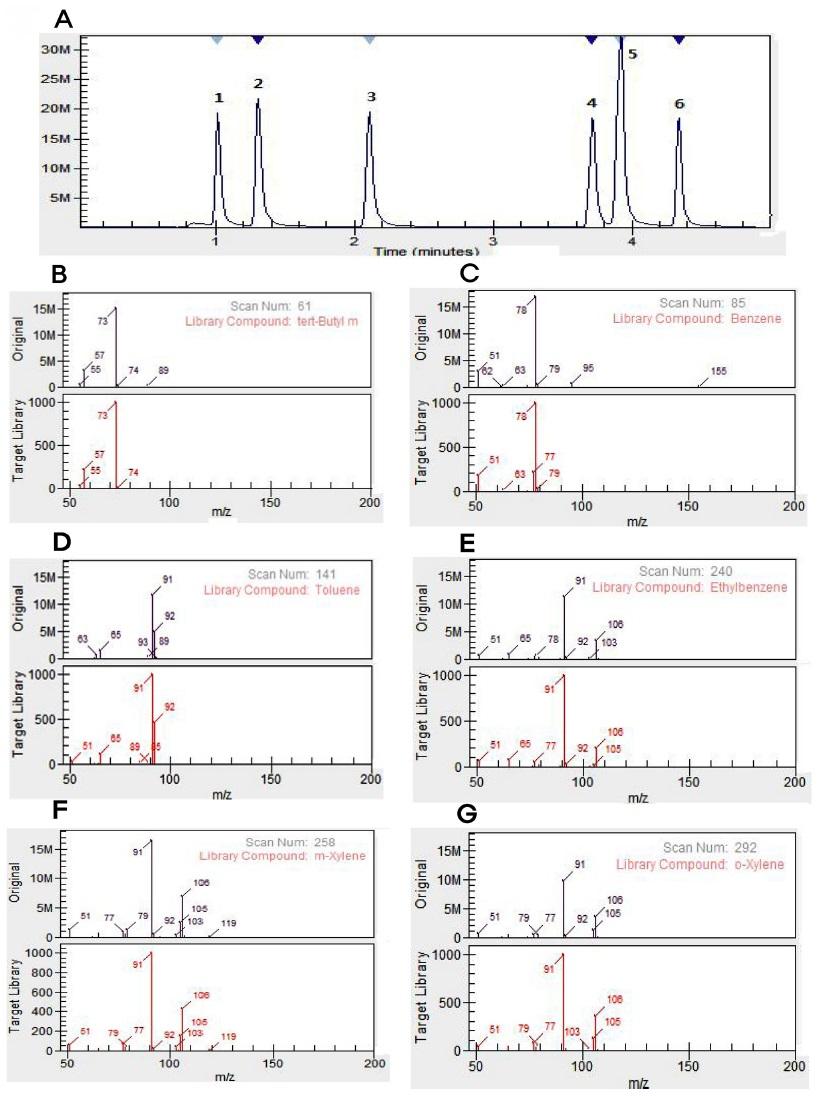 Peak 1 was detected three ion peaks at m/z 55, m/z 57, and m/z 73. The major fragmentation showed at m/z 73 and the minor ions were observed at m/z 55 and m/z 57 (Fig. 2B). On the basis of the described fragmentation patterns and mass spectral library, peak 1 was identified as tert-butyl methyl ether. However, this peak was not detected exactly molecular weight [M]+ in analysis values of the full mass scan chromatogram and chemical library values. This phenomenon suggests that the structural characteristic of tert-butyl methyl ether may be responsible for the ion fragmentation patterns of GC/MS analysis. The MS spectrum of peak 2 presented the fragment ions at m/z 78, m/z 51. As can be seen in Fig. 2C, one major ion peak (m/z 78) and one minor ion peak (m/z 51) showed in the chromatogram. Based on the mass spectral chemical library, the structure of peak 2 was tentatively determined as benzene. The GC/MS profile of peak 3 exhibited an identical molecular ion at m/z 92 with three fragmentation ions at m/z 91, m/z 65, and m/z 63 (Fig. 2D). Peak 3 was confirmed be toluene by comparing the mass spectral library. Subsequently, the major fragmentation ions of full mass scan analysis of peaks 4-6 were detected at m/z 106 (Fig. 2E), m/z 106 (Fig. 2F), and m/z 106 (Fig. 2G), respectively. According to the various fragmentation ions and mass spectral library, peaks 4-6 were assigned as ethylbenzene, m,p-xylene and o-xylene. For calibration curves, the trap time was operated with 0.05, 0.2, and 0.5 min to obtain at three concentration sequences (17.5, 70, and 175 μg). Furthermore, the correlation coefficient ( r2 ) of each curve was higher than 0.991. In other words, their values showed 0.998 (tert-butyl methyl ether), 0.994 (benzene), 0.993 (toluene), 0.992 (ethylbenzene), 0.991 (m,p-xylene), and 0.996 (o-xylene), respectively.

In general, it is well established that gas-phase FT-IR technique has been unprecedented attention due to the analyses of hazardous air pollutants, greenhouse gases, and ozone-destroying chemicals (Sharpe et al., 2004). Therefore, for determining of applicability concern to the analysis of gas-phase FT-IR, we investigated peak ranges using the exactly concentration (500 ppm) of NH3 and CO standards. The spectrum distribution of NH3 gas is known to exhibit the major peaks and several minor peaks in the ranges of 1200-800 cm-1 through qualitative analysis using gas-phase FT-IR. In our results, NH3 spectrum was observed with the ranges of 1200-800 cm-1 (Fig. 3A) and its pattern was similar to that of chemical library system (Fig. 3B). The gas-phase FT-IR spectrum of the CO is depicted in Fig. 3C. This spectrum contains two weakly overlapping peaks (2220-2060 cm-1) that were resolved by deconvolution to determine the peak positions. In the magnified spectrum, many peaks appears at 2140-2060 and 2220-2145 cm-1 (Fig. 3D). According to the chemical library spectrometric investigation, the peaks of CO spectrum was similar to those of the analyzed spectrum. Briefly, the CO gas has been demonstrated in the range of 2220-2060 cm-1 by FT-IR spectroscopy. 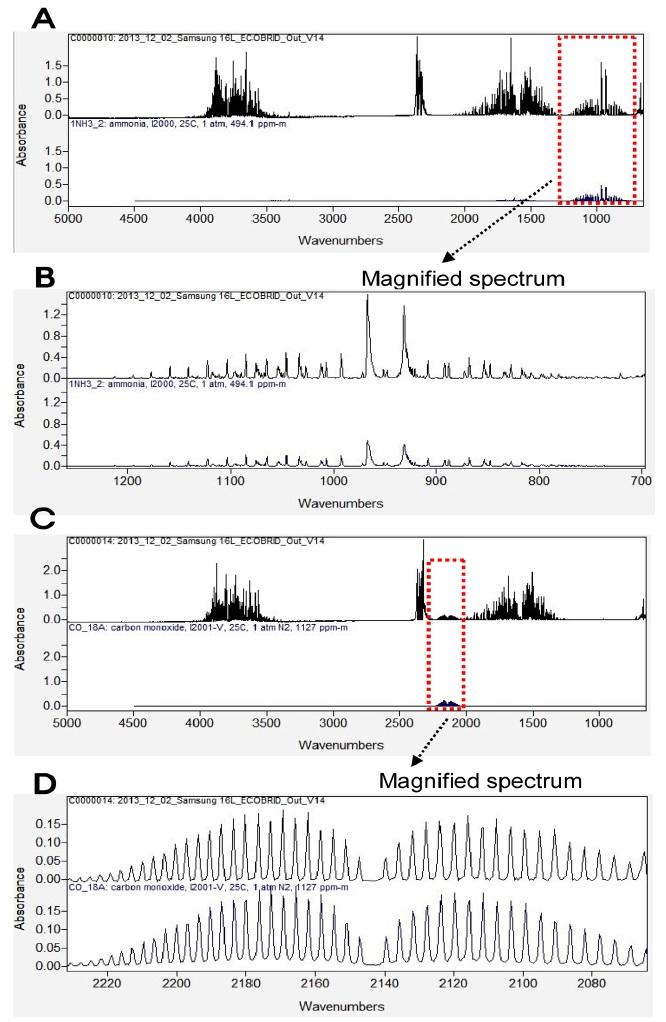 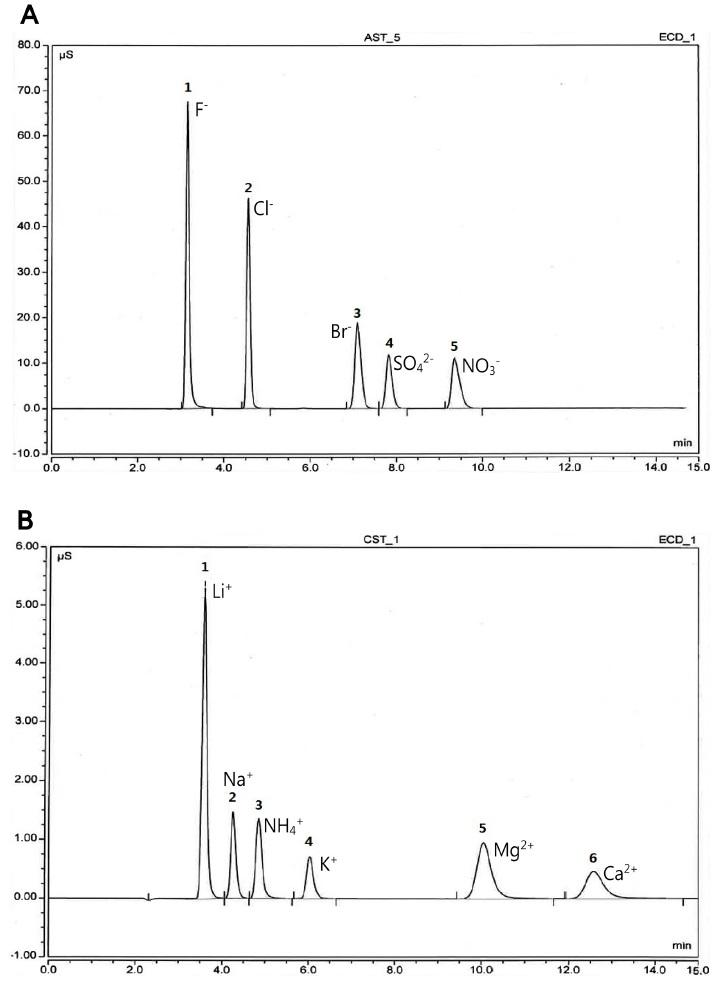 Finally, the analysis of UV-Vis spectrometry could be conducted with accurate measurement of light absorption according to the molecular structure and concentration of chemical material at different wavelengths (Haiss et al., 2007). For the screening concern to UV-Vis spectrophotometer analysis, we examined the NH4 absorption at 640 nm. The stock solutions of the standard were diluted with water to four different concentrations (0.2, 0.4, 0.8, and 1.6 μg/mL). Calibration curve was obtained with high linearity (r2 =1.000) by plotting the standard concentration as a function of the absorption value.

Based on the above considerations, the evaluation of applicability using analysis instrument in the mobile measurement vehicle may be used as an important source for on-site analysis from chemical accident.

Consequently, we introduced the mobile vehicle regarding field assessments of chemical accidents and chemical exposures. This vehicle was the first to design to obtain information about environmental and human health problems owing to exposure toxic chemical materials in the scene of the accident from the National Institute of Chemical Safety in the Ministry of Environment of Korea. Moreover, it has shown three main functions : one) sampling of chemical substances; two) preprocessing function for on-site analysis; three) scientifically interpreting the data through analysis instrument. We also evaluated the applicability of analysis instruments including GC/MS, FT-IR, IC, and UV-Vis spectroscopy from various chemical materials.