In this paper, design and analysis of permanent magnet synchronous generator for ocean thermal energy conversion (OTEC) considering magnetically coupled turbine-rotor system is discussed. In particular, the rotor dynamics considering bearing span and journal shaft diameter is highlighted. The two topologies of permanent magnet synchronous generator with magnetic coupling are employed for comparison of computed rotor dynamics and generating characteristics. The analysis results show that the critical speed of the turbine-rotor system is higher when the rotor is coupled by magnetically coupling. Finally, the experimental results confirmed the validity of the proposed design and analysis scheme and successful development.

Renewable energy is nowadays an important issue given that conventional energy resources are dwindling rapidly. In response to increased demand for electricity and the need to reduce environmental pollution, several “ideal” sources of energy have been researched as a means of generating electrical energy.

Ocean thermal energy conversion (OTEC) is regarded as being one such promising source [1]. OTEC exploits the temperature difference between the cooler deep water of the ocean and the warmer water at the surface to run a heat engine and thus produce electricity. Because the operating fluid in such a system is potentially harmful to the environment and human beings, the sealing of the fluid must be highly reliable. A system using contact seals and O-rings cannot provide this degree of reliability once it exceeds a certain age.

To overcome this problem, magnetic coupling is used to seal in the operating fluid. Magnetic coupling and a barrier can effectively contain the operating fluid and are not damaged by slippage if an excessive torque is applied [2]. However, the magnetic coupling acts as a bulging mass in a magnetically coupled turbine-rotor system. Hence the structural stiffness of the rotor in such systems is more flexible than general rotor system. This may cause more serious vibrations than in other types of rotor systems. Therefore, it is very important to investigate rotor vibration to reduce system vibration and noise.

We present a method to design and analysis of permanent magnet synchronous generator considering magnetically coupled turbine-rotor system. In particular, the influence on the bearing span and journal shaft of rotor dynamics in a turbine-rotor system is represented. The prototype machine with 18 kW 15 krpm has fabricated and tested. The measured and predicted results of the machine verifies that the successful development of our study.

Magnetic couplings are widely used to transmit torque between a primary driver and a secondary follower, without any mechanical contact. They are especially well suited for use in hazardous or corrosive environments, to transmit torque through a separation wall [1]. 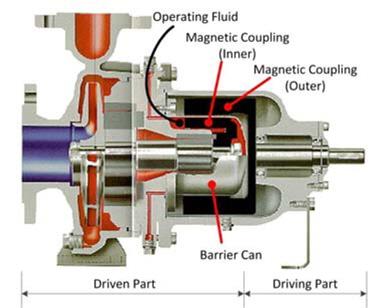 Fig. 2 shows an overview of a schematic of turbine-magnetic coupling-permanent magnet generator rotor train. The magnetic coupling has a nominal 16-Nm torque capacity, 4-mm airgap, and total weight of 3.0 kg. The detailed name and the geometrical shape of the developed rotor are shown in the figure. The system adopted for the generator is a surface mounted permanent magnet synchronous machine with a non-salient rotor. At 250 Hz (15 krpm), the machine output power is 18 kW and its terminal line-to-line voltage is 380V. It consists of a 24 slot stator with a distributed winding, and a two-pole diametrically magnetized permanent magnet rotor, which produce an essentially sinusoidal airgap flux density distribution.

The permanent is retained within an Inconel718 sleeve, which has been pressed on the rotor to withstand the centrifugal stress under high-speed operation. 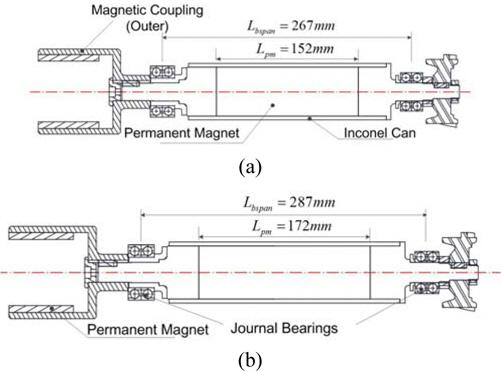 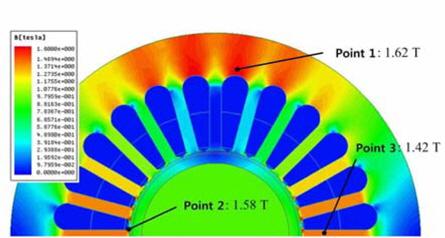 Fig. 6 shows the output power and current characteristics versus output voltage of proposed permanent magnet generators with bearing span 267 mm and 287 mm, respectively. As shown in figures, the generators have identical rated power speed when the machine works at 382 Vrms with resistance load condition. 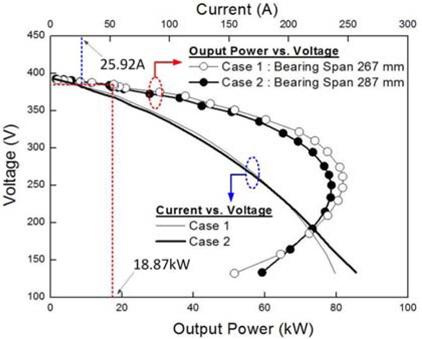 Secondly, the comparative study of the critical speed considering journal shaft diameter has been performed. In particular, the journal diameter nearest to outer hub of magnetic coupling has a large effect on the 1st critical speed of generator. Fig. 7(a) and (b) show the two topologies of generator part rotor with different journal shaft diameter. 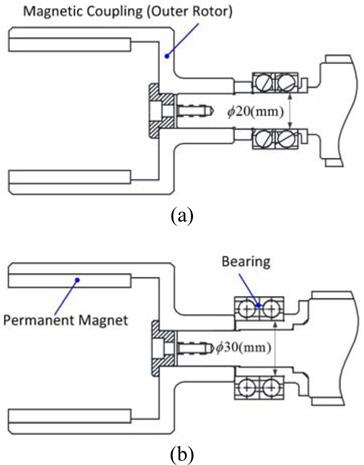 These two cases have identical bearing span (267 mm) and permanent magnet synchronous generator. The result of the critical speed map of the Case 3 is shown in Fig. 8. As illustrated in Fig. 8, the 1st forward synchronous critical speed is very adjacent to the rated speed at the specified bearing stiffness. Although the smaller journal diameter is more advantageous to acquire suitable bearings for high-speed, separation margin between the 1st forward synchronous critical speed and rated speed is not enough in this rotor system. Therefore it is impossible to accept rotor design of Case 3 if considering over-speed (16 500rpm). 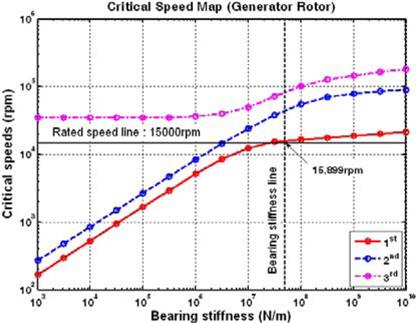 The result of dynamic response considering magnetically coupled turbine-rotor system is shown in Fig. 9. To predict the vibration response, the amount of test imbalance prescribed by ISO G2.5 is applied to the turbine and generator respectively [11]. As shown in Fig. 9, the main vibrations take place at the magnetic coupling. 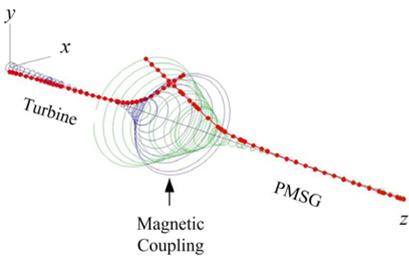 An experimental magnetically coupled turbine-rotor system with permanent magnet synchronous generator is shown in Fig. 10. All the performances of the permanent magnet synchronous generator prototype with magnetically coupled turbine-rotor system are verified successfully. Fig. 11(a) shows the transmitted amplitude calculated from the measured acceleration signal in frequency domain. The synchronous (1X) vibration level of rotor train is about 3.9 mm/s(rms) at rated operation(freq.: 250 Hz, speed: 15 krpm). Fig. 11(b) shows the comparison of between measured and FEA results for output power characteristic and efficiency according to operating speed. It can be seen that measured results corresponded well with FEA results. 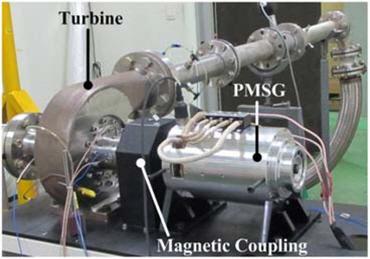 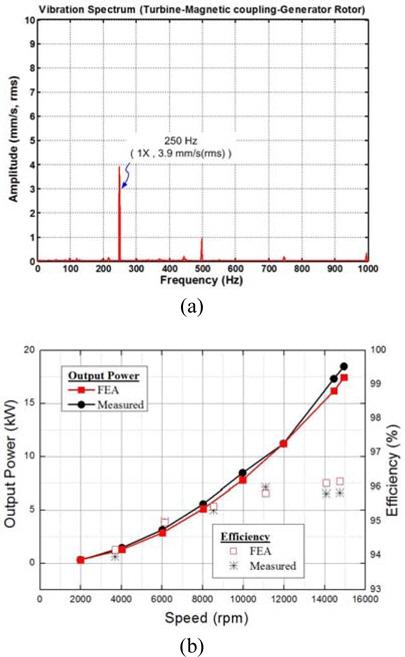 Fig. 11.Experimental results: (a) vibration spectrum at the generator housing and (b) power and efficiency.

This paper introduces the design considerations of permanent magnet synchronous generator considering magnetically coupled turbine-rotor system. A permanent magnet synchronous generator prototype and its experimental system is manufactured for OTEC at the rating of 18 kW, 15 krpm. Firstly, stability of the rotor structure with magnetic coupling is evaluated in different rotor length condition. And then, the influence of journal shaft diameter chosen for the rotor is highlighted. The analysis and experimental results show that the electrical and mechanical performances of the prototype were successfully verified.