A supercapacitor, so called ultracapacitor, is a capacitor with a very large capacity that has been studied widely owing to its charge/discharge rate, high weight power density (W/kg) and longer life time than secondary batteries for applications to cellular phones, camera flashes and electric vehicles [1-4]. In general, a supercapacitor has symmetrical electrodes with a high power density. On the other hand, the low energy density (Wh/kg), where power is the energy change per time, is a critical shortcoming due to the short charge/discharge time. To overcome this problem, several studies have examined ways of increasing the electrode surface for high energy density. Although the specific surface area can be increased by exchanging the electrode or modifying the fabrication process, the power loss can be also increased as a result of an increase in equivalent series resistance (ESR) [5-12]. Another approach to increasing the energy density is the fabrication of a hybrid supercapacitor (HS), which is consistent with a nonsymmetrical electrode [13-20]. The anode, the oxidation electrode, is made of a high energy density material and the cathode, the reduction electrode, is made of high power density material

The capacity and charge/discharge rate of HS can be enhanced further through new electrode material development On the other hand, as the capacity of HS decreases rapidly after extensive charge / discharge cycles, the reliability is still a problem for HS applications [21-24]. One study reported that the reliability of a HS can be enhanced by a post aging process [24]. The aging process generates a solid electrolyte interphase (SEI) layer on the anode surface. A SEI layer is formed on the anode surface of the prepared HS during, particularly early charge / discharge cycles. Electrically, the SEI layer transports Li ions at the interface between the electrode and electrolyte but it also prevents overvoltage. In addition, the SEI assists Li ion migration under a constant current density by maintaining the uniform composition and grain size in the microstructure. On the other hand, the unstable SEI layer induces a side reaction in that the Li ion is spent for the formation of an additional SEI layer as well as the reaction that the Li ion is adsorbed on the anode for storage. This side reaction makes the reliability of HS weak. Therefore, to improve the reliability of HS, it is important to understand the electrochemical reaction mechanism and examine the SEI layer generated during early charge/ discharge cycles.

In this study, a HS was fabricated with lithium titanate (Li4 Ti5O12 ; LTO), activated carbon (AC) and LiPF6 + Acetonitrile (ACN) as the anode, cathode, and electrolyte, respectively. A post aging process was conducted. The SEI layer was analyzed by observing the modification of the electrodes according to the early charge/discharge cycles.

This lithium titanate and activated carbon were used as the anode and cathode of the HS, respectively, and LiPF6 + CAN were selected as the electrolyte. The anode materials for HS were fabricated by mixing of 10μm (granule size standards) granule LTO 86.7 wt% developed by SAMWHA Capacitor Co. Ltd, Super-P (Timcal) 3.89 wt%, KS-6 (Timcal) 3.04 wt% and PVDF (Poly-Vinyl Di-Fluoride: Arkema-HSV900) 6.37 wt%. As an organic solvent, NMP (N-Methyl-2-Pyrrolidone) was used to make a slurry including a 39.61 wt% solid loading and a 110μm LTO electrode was casted. The cathode material was made from 240μm AC electrode (ECS-242D) produced by KOREA JCC (Japan Capacitor Corporation). The 1M LiPF6 + ACN was applied for the electrolyte, and finally a product was made using NKK (Nippon Kodoshi Corporation)’s membrane. The electrochemical properties of product were measured using a Super Capacitor Testing system (SCTS) made in ARBIN. A HS of 1000F was tested under 10mA and 100mA for 3 charge/discharge cycles at 21℃. Before the charge/discharge test, the specimens from the electrode were cleaned with ethanol. The microstructure of the SEI layer was characterized by field emission-scanning electron microscopy (FE-SEM) and the crystallinity was detected by X-ray diffraction (XRD).

A normal electric double layer capacitor (EDLC) stores energy by adsorbing cations (Tetraethylammonium+, TEA+) and anions (tetrafluoroborate-, BF4-) physically inside the AC electrode [25]. To reach more than 99% efficiency of EDLC, approximately 150 charge/discharge cycles are needed to stabilize the pathway for Li ions to migrate. In contrast, HS requires just 10 charge/discharge cycles for stabilization. For an EDLC, Li ions are absorbed / desorbed physically in both the anode and cathode. In the case of HS, Li ions were absorbed/desorbed physically because AC was also used for the cathode. On the other hand, when LTO was adopted for the anode of HS, a chemical reaction was involved during the insertion / extraction of Li ions and stability was improved. This chemical reaction was finished for several tens cycles. This suggests that the initial aging process is quite important for efficient HS.

During the charge/discharge cycles, a SEI layer is generated on the anode surface as a result of a reaction between the solution electrolyte and solid LTO electrode. The SEI layer acts like the diffusion barrier layer. The formation of the SEI layer induces a volume change along with a side reaction, in which the Li ions are spent to form an additional SEI layer that becomes unmovable instead of involving a storage process.

Fig. 1 shows the efficiency of HS for the charge and discharge process. The efficiency of the first cycle was ~80%. The efficiency increased with increasing number of cycles. As mentioned previously, the initial cycles, particularly the first cycle, are important in the LTO anode, where Li ions are inserted or removed during the charge or discharge process. During the initial charge/discharge cycles, side reactions by impurities are generated and a SEI layer can be formed on the electrode. The SEI layer of LTO forms at 0.8 V [26, 27]. As the minimum operating voltage of HS is generally set to more than 1.5V, it can be easily thought that the SEI layer cannot be generated during the operation. On the other hand, after manufacture, because virginal HS should be charged from 0 V to 1.5 V, the HS inevitably passes through 0.8V, where a SEI forms. Hence, SEI formation cannot be excluded during the first charge process. This SEI formation during the first charge process would lead to the lower discharge capacity in Fig. 1. 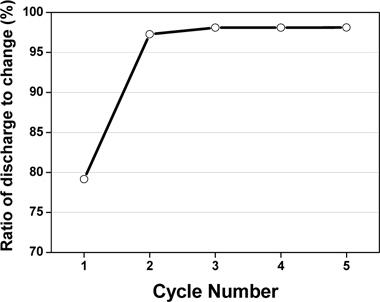 Fig. 1.Ratio of discharge to charge of HS for the number of cycle 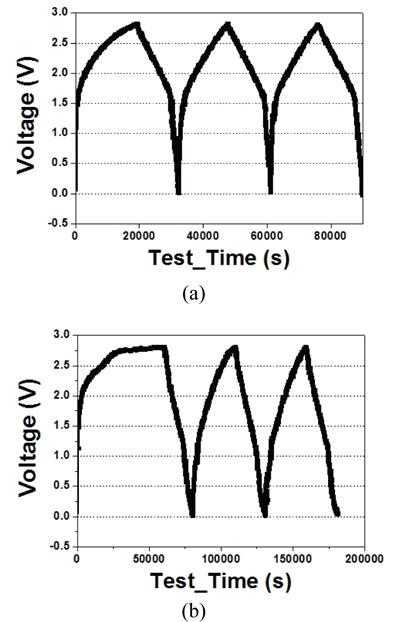 FE-SEM was performed to confirm the change in morphology of the electrode. Fig. 3 shows FE-SEM images of the electrode surface before or after charge/discharge. As shown in Fig. 3(a), (b), charge / discharge did not induce a morphological change on the cathode AC surface. In contrast, the morphological difference was observed in the anode LTO. Before charging, the surface of the LTO electrode showed an edge shape but this edged shape was modified morphologically to a round shape by the chemical reaction after the discharging process. This phenomenon was attributed to the formation of a SEI layer. 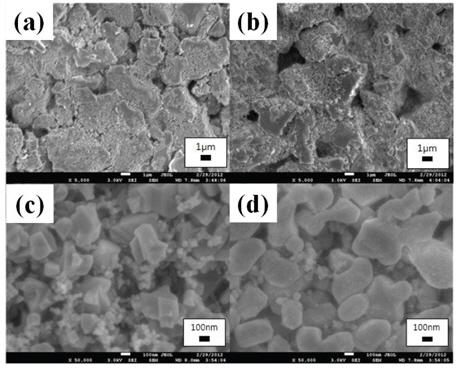 XRD was carried out to examine SEI layer formation by a chemical reaction (Fig. 4). For the AC cathode (Fig. 4 (a)), the XRD peaks were identical regardless of the charge/discharge. On the other hand, for the LTO anode, additional XRD peaks in Fig. 4(b) were observed at 38° and 44° 2θ after ~4000 cycles. These new peaks were identified as LiF from the JCPDS card (ICSD #: 062361). Considering that the electrolyte in this experiment was 1M LiPF6 / acetonitile, the LiF peaks in the SEI layer would be generated after the charging cycles by a reaction between the Li ion of LTO and the F ion of LiPF6. The SEI layer, which is thermodynamically stable, was formed in the early cycles and suppressed the decomposition reaction of the electrolyte by wrapping the electrode. The formation of the SEI layer in the anode is relatively easier than in the cathode [28,29]. The SEI layer can be found occasionally in the cathode, albeit at small amounts. Therefore, no LiF peaks were observed in the cathode. 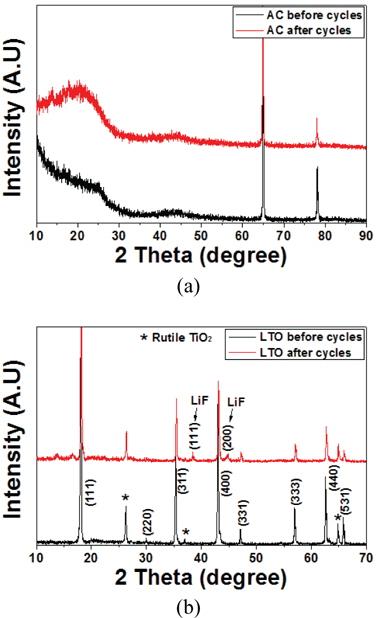 Fig. 4.XRD patterns of (a) Cathode and (b) Anode electrode of HS before and after cycling

To improve the stability of a capacitor, a hybrid supercapacitor was fabricated with an AC cathode and LTO anode, and the aging phenomena along the initial charge/discharge process were examined. The charge curve at the first cycle showed distinctive behavior and had a small slope with time. FE-SEM showed that a SEI layer was formed on the LTO surface. XRD indicated that the SEI layer was composed of LTO and LiF. LiF was formed as a result of a side reaction during the charge/discharge process. The discharge efficiency of the first cycle was < 80% against the subsequent cycles. Some Li ions were used to produce the SEI layer rather than contribute to the charge process. This suggests that a homogeneous SEI layer had formed through the aging process to achieve reliable charge/discharge behavior.