Test temperature is an important factor affecting the measurement results of dielectric response of field power transformers. In order to better apply the polarization and depolarization current (PDC) to the condition monitoring of oil-paper insulation system in power transformers, the influences and elimination method of test temperature on PDC characteristic spectroscopy (PDC-CS) were investigated. Firstly, the experimental winding sample was measured by PDC method at different test temperatures, then the PDC-CS was obtained from the measurement results and its changing rules were discussed, which show that the PDC-CS appears a horizontal mobility with the rise of temperature. Based on the rules, the “time temperature shift technique” was introduced to eliminate the influence of test temperature. It is shown that the PDC-CS at different test temperatures can be converted to the same reference temperature coincident with each other.

In recent years, new diagnosis methods including Return Voltage Method (RVM) [9], Polarization and Depolarization Current (PDC) [10, 11], Frequency Domain spectroscopy (FDS) [12] based on dielectric response, have drew much attention with the advantages of no sampling and non-invasive measurement, etc. Contrasting the above methods with each other, we can see that: RVM method can’t distinguish the different influences of insulation oil and paper on characteristic spectroscopy which makes it difficult in practical application; FDS method performs without the problems in RVM, but it takes too much time for measurement limited to field test; PDC method with advantages of short test time and abundant information of insulation is very suitable for noninvasive diagnosis of field transformer oil-paper insulation ageing status which will be discussed in this paper.

The test object-winding model was shown in Fig. 1.

The process of PDC test was conducted as follows: firstly, the winding sample was placed in fresh oil for impregnation, then it was put into a flask which, in the next, was kept in oil bath with initial temperature of 40℃. After sample reached the target temperature, the flask was sealed and kept for two days until the moisture content between insulation oil and paper reached balance. After that, PDC measurement was carried out with the parameter setting: measurement voltage was set as U0=200V, and polarization and depolarization time were both set to 5000s. The winding sample was measured by PDC-Analyser-1MOD from company ALFF ENGINEERING in Switzerland. After measurement, high and low voltage electrodes of winding were shorted to release the residual charges in sample. Then, test temperature was raised and kept at 55℃ also for two days. Analogously, the above steps were repeated for the next measurement. As a rule, test temperature was 15℃ higher than the former one for each new measurement. Through the process, we got PDC measurement results of sample at different test temperatures of 40℃, 55℃, 70℃, 85℃ and 100℃. 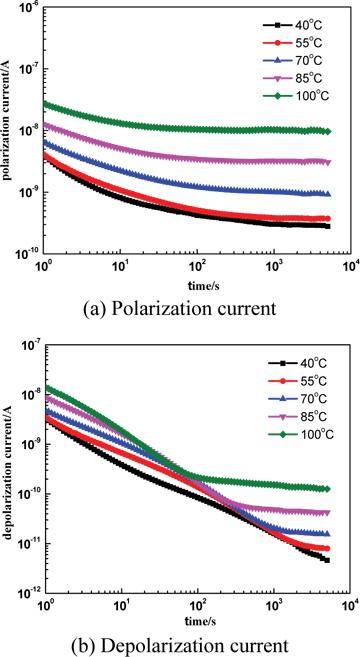 3.2 Acquisition of PDC-CS and the influences of test temperature

Some research had been taken on the influence of aging on the PDC-CS with the conclusion that depolarization charge quantity-Qdep(t) appears exponential growth with oil-paper insulation gradually aging. However, the quantitative connection of test temperature and Qdep(t) was not discussed. So Qdep(t) will be chosen as a characteristic quantity to study the influence and elimination of test temperature on PDC measurement.

Before discussing test temperature, a new characteristic parameter will be first introduced. Referring to the definition of Qdep(t) in Eq. (1), computing the integral for polarization current gets the polarization charge quantity - Qp(t) shown as Eq. (2).

Compared with Qdep(t), Qp(t) carries more insulation information by the reason of polarization current contenting both conduction current and polarization current. This new characteristic parameter can play an important role in accessing oil-paper insulation condition of power transformers, meanwhile, provide a comparison to the former one to verify the effectiveness of the elimination method for the influences of test temperature.

Fig. 3 shows the varying pattern of PDC-CS of Qp(t) and Qdep(t) with different time and test temperatures(logarithm for abscissa, and linearity for ordinate). 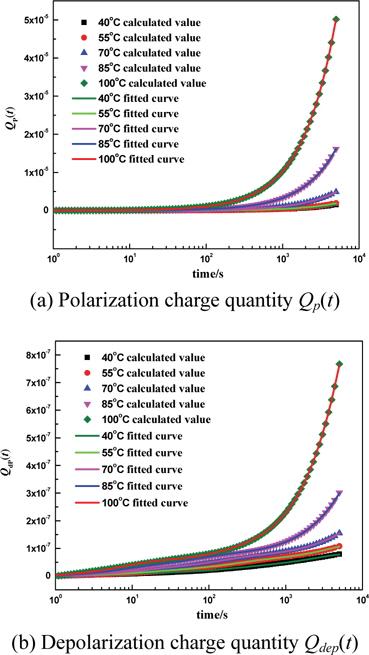 According to [21], the relaxation currents can be modeled by exponentials. As the integral of relaxation currents, the PDC-CS also meets the general model. Table 1 and Table 2 show the fitting relationship between Qp(t) and Qdep(t) and test time under different test temperatures which meet the exponential function with the goodness of fit up to 0.99. 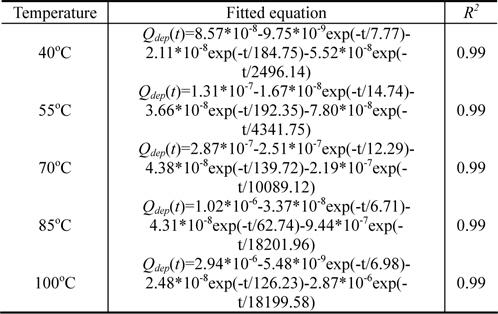 3.3 Elimination method for influences of test temperature on PDC-CS

In the research of aging characteristics and aging mechanism of transformer oil-paper insulation, reference [22] found an idea called “time- temperature superposition [23]”, which can be used as a guidance to improve the thermal aging model of oil-paper insulation by introducing the second order kinetics model. Based on the above thoughts and the change rule discussions of PDC-CS in section 3.2, a method of eliminating the influences of test temperature will be introduced, called “time temperature shift technique”.

Firstly, the Qp(t) curve under 40℃ is chosen as the master curve -“S1”. Then, the rest of the Qp(t) curves under 55℃, 70℃, 85℃ and 100℃ are moved along time axis to S1 horizontally, so does the treatment of the Qdep(t) curves. Through the translation, different curves almost coincide with each other. The combination of these curves form a new feature curve called “S2”. In this way, differences of the PDC-CS caused by test temperatures have been basically eliminated. The curves before and after translation are shown in Fig. 4. 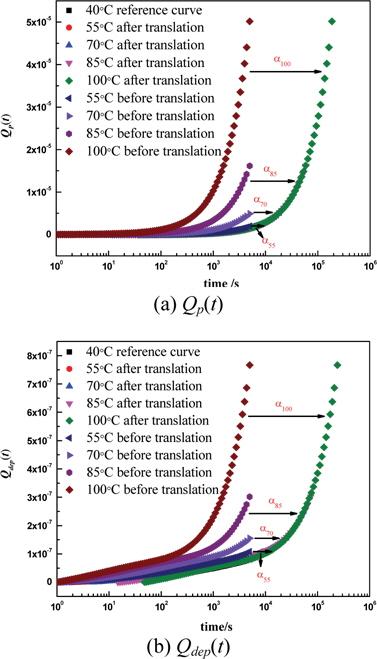 For the purpose of forming the new feature curve S2, a variable-“time temperature shift factor” is defined as:

Where: tref is the time corresponding to a certain point on PDC-CS after translation; tT is the time corresponding to the same point before shift. In other words, αT is equivalent to the change of length of curves for the horizontal translation. The following will focus on the compute of αT by the example of Qp(t). The “time temperature shift factor” with 40℃ is defined as α40=1. Based on the change of time axis in Fig. 4(a) during the translation, computing the ratio of the time of one point in the curve before and after move, gets the “time temperature shift factor” αT as: α55=1.2656, α70=3.5473, α85=11.8059, α100=37.1810, which are shown in Fig. 4(a). 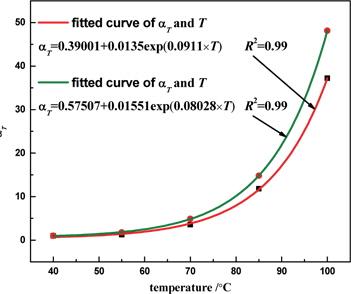 It is worth mentioning that, through the method “time temperature shift technique”, the time horizon of the PDC-CS is expanded from 100~5×103s to 100~105s, which means, without any increase in test time, it can be realized to collect more information of PDC-CS. It is of great advantage to field test.

Obviously, before applying the PDC-CS-Qp(t) and Qdep(t) into condition assessment of field transformer oil-paper insulation, a large quantity of essential data of PDC features at different test temperatures should be collected and “time temperature shift factor” αT need to be further modified to ensure the accuracy.

In this paper, transformer winding sample was measured by PDC method at different test temperatures, and the PDC-CS was obtained from original data. Then the influences and elimination of test temperature on the PDC-CS were discussed. The conclusions are made as follows: