Moisture and high temperature are the most important factors that lead to the ageing of oil-paper insulation, but the research about space charge characteristics of oil-paper insulation does not take the combined effect of ambient temperature, moisture and thermal ageing into account. The pulsed electroacoustic (PEA) method was used to investigate the influence of moisture and temperature on space charge characteristics of oil paper at different ageing stages. The results showed that moisture could speed up formation of space charge in oil paper when water concentration was low, but the formation was restrained if the water concentration was high. At the beginning of thermal ageing, heterogeneous charge accumulation had predominance, but it gradually changed to homogeneous charge injection with ageing. It was believed that moisture concentration could speed up ageing and enhance charge accumulation on one hand, and accelerate or slow down the establishment speed of space charge on the other hand, therefore, charge accumulation type changed with ageing. The more seriously the oil-paper insulation was thermally aged, the deeper the trap energy level was, hence more space charge was trapped, which could be speeded up by increasing the ageing temperature, but the effect of ambient temperature did not fit the Arrhenius law.

HVDC transmission has been developed fast recently because of its excellent advantages such as high reliability and low cost. Transformer is a high voltage component in the transmission system and it plays a vital role. Oil paper (or oil-impregnated paper) is widely used as the main insulation material in transformer due to its outstanding mechanical and electrical properties [1, 2]. During the long-time operation, oil paper gradually degrades under the combined electrical, thermal, mechanical and chemical stress, which will lead to its performance sliding down [3, 4]. The degradation can finally lead to the failure of transformer.

Except for the ageing problem, space charge easily accumulates within oil-paper insulation in the service. Space charge is an unfavorable phenomenon for DC apparatus and its accumulation can result in localized electric field distortion, which will affect the property of dielectrics, such as conduction, breakdown and ageing, etc. [5, 6]. Space charge has become an area of growing interest and the pulsed electroacoustic (PEA) method has been widely used for observing space charge dynamics. However, present space charge research mainly focuses on polyethylene and there are fewer literatures about space charge characteristics of oil-paper insulation. R. S. Liu finds that a higher moisture concentration causes a faster formation and deeper penetration of space charge inner oil-paper insulation [7]. R. Ciobanu et al. has investigated the influence of gamma radiation ageing on space charge behaviors [8]. Because oil paper generally presents in the form of multi-layer structure, forming an interface between oil-paper layers, and charge can be easily stored at the interface. Therefore some scholars have paid their attention to space charge dynamics at the interface [9-12]. Effects of moisture [9], temperature [10] and polarity reversal voltage [11, 12] on space charge of multi-layer oil paper have also been studied.

In this paper, oil-paper specimens were thermally aged under different moistures and temperatures. After ageing, space charge characteristics were researched by the PEA method. The influence of temperature and moisture was then analyzed.

This section described how to prepare oil-paper specimens and some details of space charge measurement by the PEA method.

Table 1.The theoretical and measured water concentrations of oil-paper specimens

Moisture concentration during thermal ageing had been measured, as shown in Fig. 1. It could be seen that moisture fluctuated with ageing time, which was coincident with present literature, but the value was close to the initial value. 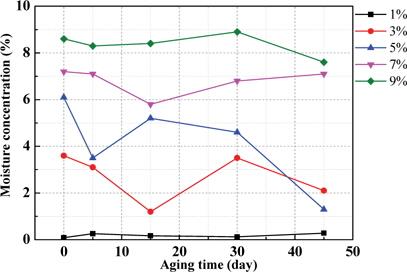 The PEA method has been one of the widely used techniques for space charge measurements. After ageing, space charge distributions within oil-paper samples were measured by the PEA method at room temperature. Details of the PEA method could be found in [16]. The pulse width of our system was of about 5 ns and its frequency was of 1 kHz. For each test, 5 virgin samples were measured to eliminate the chance of accidental results. And for each data, 400 pulses were applied to filter background noise and ensure data reliability. Each sample was polarized under 10 kV/mm electric field for 30 min firstly and then it was short circuited. Space charge profiles were measured during both polarization and depolarization. 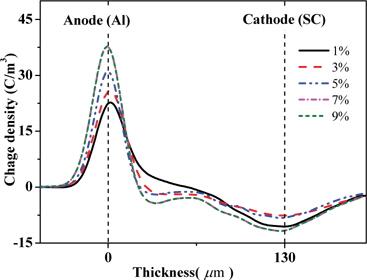 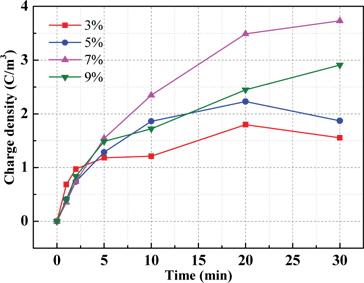 Due to the moisture concentration, space charge behavior changed with ageing, which could be seen clearly from Fig. 4. 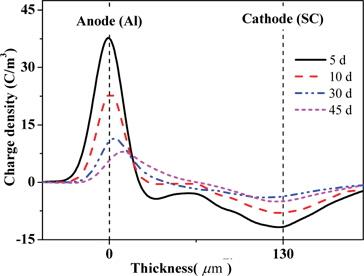 Fig. 4.Space charge distribution curves of samples with 9% moisture concentration at the end of polarization vs. ageing days

After it had been aged for 5 days, space charge behavior inner oil-paper samples with 9% moisture concentration showed no difference to that of unaged one (Fig. 2). As thermal ageing went on, homogeneous charge accumulation appeared near the anode and space charge cloud near the anode moved towards the cathode. That meant space charge accumulation type changed with ageing. It is known that trapped charge is de-trapped after removing the applied voltage. The carriers bounded in the shallow traps are released earlier than the carriers bounded in the deep traps for oil paper when the applied voltage is removed. If the carriers are not trapped again, trap energy level Et and trap energy density Nt can be calculated according to Eqs. (1) and (2) [19, 20]. It is worth mentioning that the acquisition of them is bases on isothermal charge equation and there have been some assumptions. Details can be found in [20].

where k is the Boltzmann’s constant, k=8.568×10-5 eV/K, T is the absolute temperature, ν is the frequency of electron vibration, ν = 3×1012 s-1, η1 and η2 are constants, τ is the decay constant of charge density during depolarization, and t represents decay time. Because the increase of trap density was known, it was not shown here anymore, namely η2 kept unchanged for all conditions.

Fig. 5 was the calculated trap energy distributions of samples with 9% moisture concentration. After thermal ageing, trap density and trap depth increased. Space charge injection and movement slowed down. Recombination became weak and more charge was trapped [20]. Therefore the homogeneous charge accumulation became more and more obvious. As mentioned above, moisture was the main reason of heterogeneous charge accumulation. It suggested that the effect of moisture gradually became weak while that of ageing became strong with ageing. 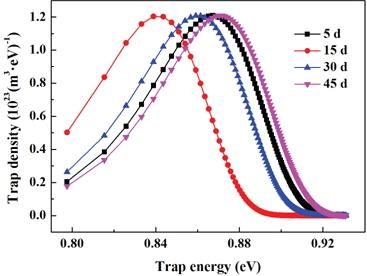 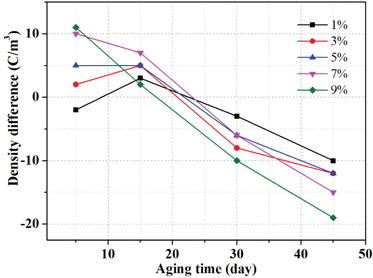 Fig. 6.Ageing day-dependent variations of the difference of space charge density amplitudes at the anode of samples with different moisture concentrations 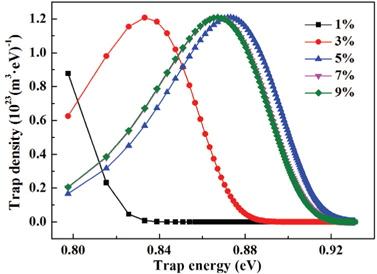 Fig. 8 showed space charge distributions at the end of 30 min polarization of oil-paper samples that had been aged for different days at 130℃. 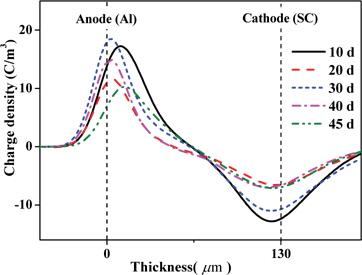 Fig. 8.Space charge distribution curves at the end of polarization of oil-paper samples aged for different days under 130℃ 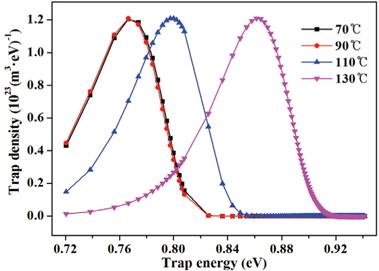 It could be seen that trap density and trap depth increased with ageing temperature after oil paper had been aged for certain days. Trap energy distributions of samples aged under 70℃ and 90℃ were similar to each other, and traps were mostly shallow traps. Trap energy of the largest trap density was about 0.77 eV. That of samples aged under 110℃ and 130℃ were 0.80 eV and 0.87 eV, respectively. It meant that the higher the ageing temperature was, the faster oil paper was aged and the deeper trap energy level was. Hence space charge injection and migration were affected, and recombination weakened, so there was more charge [20]. As a result, charge injection and space charge cloud movement were more obvious.

The corresponding trap distributions of samples that had been aged for 45 days were illustrated as Fig. 10. After such a long time ageing, difference caused by ageing temperature and ageing status was very clear. The higher the ageing temperature, the deeper the trap energy level. The increase of trap depth weakened recombination and led to more charge accumulation. Compared to Fig. 9, we found that thermal ageing could also deepen the trap energy level. In addition, the difference between trap distributions of samples aged under 70℃ and 90℃ was more and more obvious with ageing. 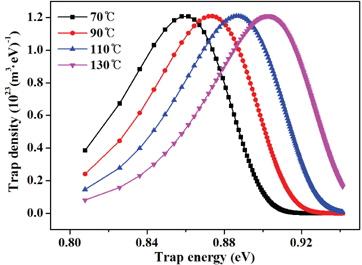 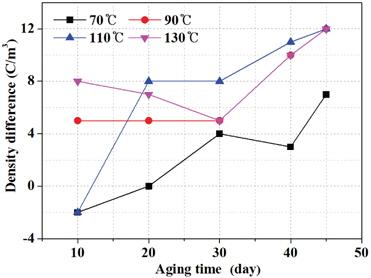 Fig. 11.Ageing day-dependent variations of the difference of space charge density amplitudes at the anode of samples aged under different ageing temperatures

The Arrhenius law is a widely used ageing model, which can be expressed as follows:

where f(T) is used to represent ageing status, Ea is the necessary energy for ageing, fc is a constant [21]. The activation energy of oil paper is about 111 kJ/mol [22], hence the Arrhenius law can be simplified to:

This paper studied space charge behavior of oil-paper insulation. Kraft paper was firstly thermally aged under different moisture concentrations and temperatures. After ageing, space charge distributions were measured by the PEA method. The following conclusions could be drawn: