Gallium nitride (GaN) is a promising material for next-generation high-power applications due to its wide bandgap, high breakdown field, high electron mobility, and good thermal conductivity. From a structure point of view, the vertical device is more suitable to high-power applications than planar devices because of its area effectiveness. However, it is challenging to obtain a completely upright vertical structure due to inevitable sidewall slope in anisotropic etching of GaN. In this letter, we design and analyze the enhancement-mode n-channel vertical GaN MOSFET with variation of sidewall gate angle by two-dimensional (2D) technology computer-aided design (TCAD) simulations. As the sidewall slope gets closer to right angle, the device performances are improved since a gradual slope provides a leakage current path through the bulk region.

The wide bandgap, high electron mobility, high critical electric field, and good thermal conductivity of gallium nitride (GaN) make GaN useful for high-power and high-temperature applications [1-6]. In recent studies, most of attention has been drawn to either silicon carbide (SiC) power metal-oxide-semiconductor field-effect transistors (MOSFETs) or high electron mobility transistors (HEMTs) [7-12]. However, the continuous developments of SiC MOSFETs and GaN HEMTs have been hindered by their own limits. SiC MOSFET has weaknesses that it is hard to form high-quality oxide/SiC interface and its channel mobility and device reliability are relatively low [13, 14]. Although the GaN HEMT has high two-dimensional electron gas (2-DEG) density and high mobility, it suffers from current collapse which is mainly due to the electric field induced from the AlGaN surface under the gate and large gate leakage current which is owing to the absence of gate insulator [15]. It also operates at normally-on mode due to the existence of 2-DEG populated below fermi level under equilibrium condition at zero bias. The GaN MOSFET can be also operated at a normally-off mode with much lower gate leakage current under certain design conditions while its high electron mobility and density can be somehow sacrificed. Although SiC MOSFET has been a dominant power device, GaN MOSFET has superiority in terms of high-quality GaN channel-gate insulator interface, high mobility, and blocking voltage [5, 14]. Vertical channel provides advantages of high current density per unit area and scalability of gate length. Also, it helps achieving simpler and less destructive processing (less damage) getting rid of either ion implantation process or electron-beam irradiation in device fabrication than lateral channel, since a vertical GaN device is usually fabricated by epitaxial growths [16-18]. In addition, the cylindrical-shaped structure brings higher gate controllability and enhanced current drivability [19-22]. However, fabrication of a complete vertical structure can be challenging due to the etching process for sidewall formation that substantially controls the device performances. For this reason, the sidewall gate slope can be regarded as one of the design variables. 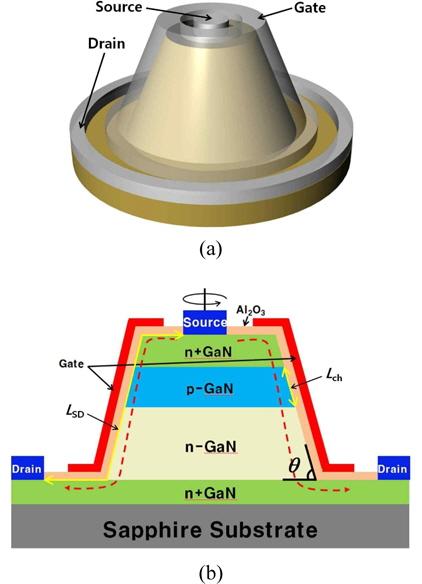 For higher accuracy and quality in simulation work, we have been included the k.p band parameter model for wurtzite structure of GaN in order to calculate the effective masses and band edge energies. We also added the specific electric field-dependent mobility models for GaN and the direct recombination model accounting for high level injection effects. The Fowler-Nordheim tunneling model has been included for the analysis of electron tunneling phenomenon into conduction band of the gate dielectric when the electric field across the gate dielectric is adequately high. In addition to this, the Shockley-Read-Hall (SRH) recombination model, the Selberherr’s impact ionization model for the off-state breakdown characteristic, and other material-related parameters for GaN have been included [23].

Fig. 3(a) depicts Ron and Imax as a function of sidewall angle, where Ron and Imax show monotonic decrease and increase, respectively, as could be inferred by Figs. 2(a)-(c). Imax values were 34.3 mA/mm, 105.5 mA/mm, and 934.0 mA/mm, respectively, when the sidewall angles were 15°, 36°, and 90°. Also, at these angles, Ron’s were 36.7 mΩ·cm2, 9.7 mΩ·cm2, and 1.6 mΩ·cm2, in sequence. In practice, GaN layer has wurtzite crystal structure. After the mesa etching process, GaN layer has the sidewall slope and the dislocations such as defects or traps may occur due to the anisotropic effect. Owing to these defects of traps in the surface of sidewall, the electron mobility and the drain current are expected to decrease due to the current collapse [24, 25]. In this paper, however, the influence of channel length modulation is investigated in priority because the change of the Lch and LSD by sidewall slope is more dominant. Fig. 3(b) shows the method of extracting Ron of a device of which sidewall angle is 36°. The above simulation results show that larger sidewall angle warrants better Ron and Imax at the same time. 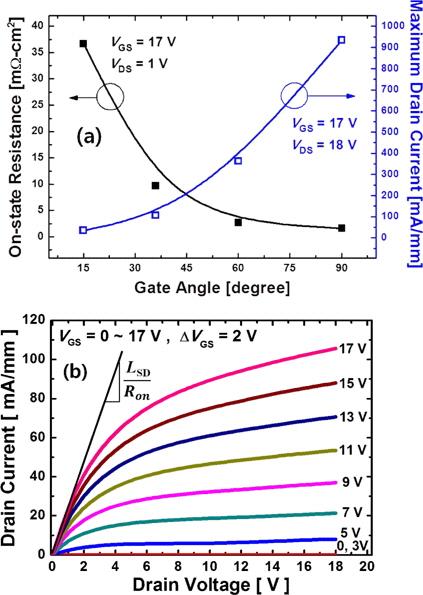 Fig. 3.Sidewall angle-dependent direct-current (DC) performances. (a) Ron and Imax as a function of sidewall angle. (b) Extraction of Ron (sidewall angle = 36°).

Fig. 4 shows the change of Ron as a function of LSD and the change of LSD with different sidewall angles is displayed in inset of figure. As the sidewall angle varies, the LSD also varies with the variation of Lch. As shown in Fig. 4, the Ron is directly proportional to the LSD. In other words, there is a linear relationship between Ron and LSD because the distance between the source and drain behaves like a resistor towards electrons. 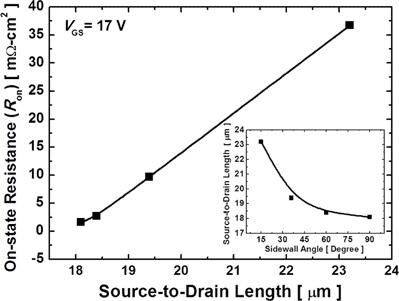 Fig. 4.Ron as a function of source-to-drain length (LSD). The inset shows the LSD with different sidewall angles.

Figs. 5(a)-(c) demonstrate the ID-VGS transfer curves and transconductances (gm) at different sidewall angles. Vth was extracted based on the constant current method (at the gate voltage for which IDS= 10-1 mA/mm). VDS was kept constant at 10 V during the VGS sweep. Vth’s were 4.9 V, 3.5 V, and 2.9 V at sidewall angles of 15°, 36°, and 90°, respectively, where the lowering at higher angles was due to the reduction of physical channel length. Peak transconductance was 2.6 mS/mm at a sidewall angle of 15°, 6.9 mS/mm at 36°, and 53.2 mS/mm at 90°. Again, these results support that larger sidewall angle ensures better DC performances along with the parameters in the previous part. 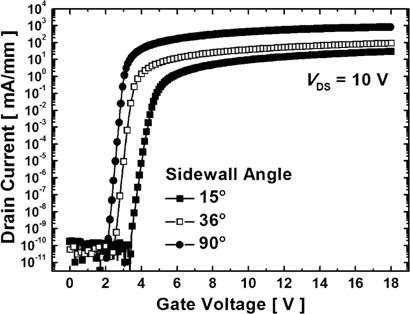 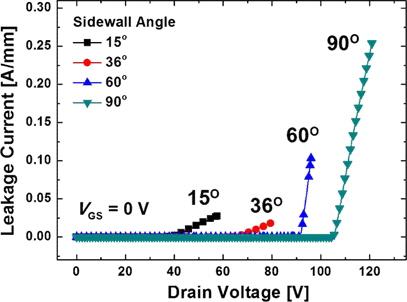 Figs. 8(a) - (d) indicate the electron concentrations after the occurrence of breakdown leakage currents and each biases are displayed in inset of figures. With the aforementioned off-state breakdown characteristics, introduction of a proper passivation layer such as either AlN thin film [26, 27] or field plate [28, 29] enhances the robustness against the breakdown.

In this work, we investigated the effects of sidewall angles on electrical characteristics of enhancement-mode n-channel vertical GaN MOSFET in terms of Imax, Ron, Vth, S, and VB. As the result, larger sidewall angle improves the overall device performances. Therefore, it would be critical to construct the sidewall gates with right angles as much as the anisotropic dry etching permits, for both device performances and area-effectiveness. One drawback that sharp slope might bring is the breakdown characteristics but it would overcome by appropriate passivation techniques relieving the electric field at the gate edge.