The existing analogue-controlled SMPS bears the distinctive limitations of additional cost and time for development due to its complicated design and limited scope of application [4, 5]. Especially, its filter circuit to secure loop bandwidth serves as the major cause of limiting the scope of application [6, 7]. To address these issues, the methods for digitally-controlled SMPS are being considered as an alternative.

The digitally-controlled SMPS has an advantage of being robust to the noise in power supply and easy to activate when compared to the analogue-controlled ones with their excellent performances in the normal and dynamic state. However, the digital-controlled SMPS still retains digital compensator which serves as filter circuit to secure analogue-controlled loop bandwidths, resulting in the complexity in design and increase of chip area [8-10]. Such problems call for introduction of design and production technology for power supply circuits which can provide a high rate of power conversion while leaving the form of electronic devices unaffected.

The hybrid control method of SMPS [11] enables stable and efficient power supply by real-time monitoring and digital-controlling of SMPS via wireless networks in order to optimize the power conversion and transmission in analogue way and counter the volatility of external factors. However, designed and manufactured for fixed load, the system suffers from major drawbacks of lowering the efficiency and power factor of output power under variable load conditions. Technology to monitor the variation of load in real time and make power supply safe and stable is required to overcome these limitations.

Fig. 1 shows the structure of the proposed multiple SMPS system, and the detailed explanations are given in the following sections. 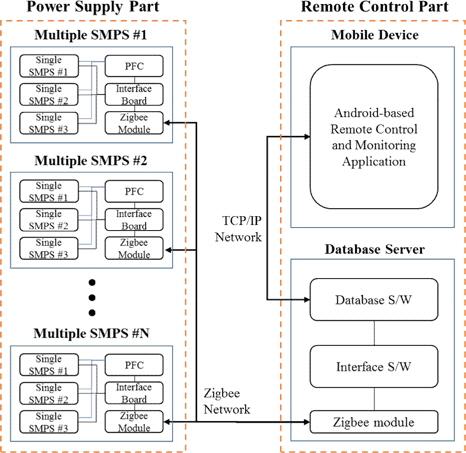 The power supply part is integrated with a number of multiple SMPSs. Each multiple SMPS is designed to control an output power based on variable load, and composed of three single SMPSs (single SMPS means a unit module with 200W), power factor correction (PFC), interface board, and Zigbee module as shown in Fig. 2. Zigbee module transmits SMPS monitoring data (voltage, current, temperature) received from the interface board to remote control part and transmits SMPS control data received from the remote control part to the interface board. The interface board controls PFC and the three single SMPSs modules according to the transmitted control data. Also, the board passes on the monitoring data to remote control part via Zigbee module by ADC of the monitoring signals. PFC controls the three ones and supplies power by converting DC power to AC power. 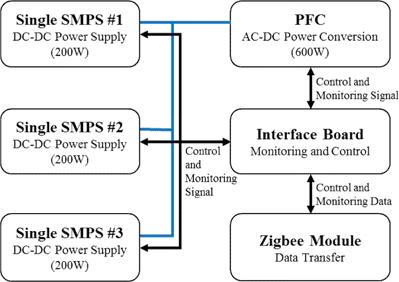 Fig. 2.Structure of the individual multiple SMPS proposed for controlling output power based on variable load

Fig. 3 illustrates the operational flowchart of the proposed multiple SMPS. As shown in the figure, PFC is initialized in the initial operation, measuring output voltage and current. Once the output voltage and current are measured, the multiple SMPS calculates output power using the measured and operates the first SMPS (illustrated as single SMPS #1 in Fig. 2). While being operated, it activates the second one (single SMPS #2) when the output power gets greater than 200W (the maximum power capacity which can be provided by single SMPS). In sequence, it turns on the third one (single SMPS #3) when the output power gets greater than 400W. Such way of operation minimizes the standby power by supplying the power matching actual power volume. It also contributes to enhancing efficiency and power factor of power supply and maximizing the product longevity of power supplier by reducing the current and voltage stress in power devices. 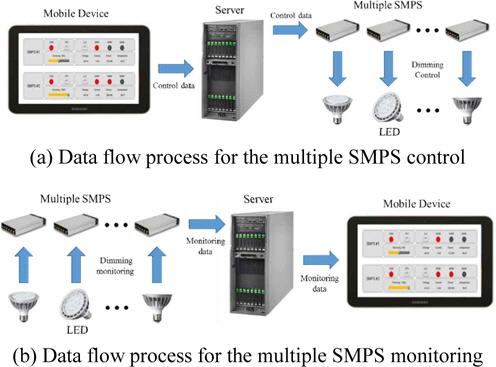 The communication data frame complies with the form used for the single SMPS system [11] and was expanded for the multiple SMPS control as displayed in Fig. 6. The common header frames in controlling and monitoring data frame are used to identify the multiple SMPS system data. ID frame is used for identifying server and each SMPS and checksum frame for detecting errors of the communication data. The control data frame includes PFC, threes single SMPSs, and LED dimming control data; monitoring data frame comprises data for voltage, current, and power to control output according to the load and temperature data to protect SMPS.

Android-based application GUI for remote control and monitoring is illustrated in Fig. 7. The major function of the application divides into the multiple SMPS monitoring and SMPS control. In order to simulate such functions, authors established wireless network environment composed of 2 SMPS, through which voltage, current, and temperature, and control status of the multiple SMPS were monitored.

This section deals with the performance evaluation of the proposed system by efficiency measurement test for both single SMPS as a unit module and multiple SMPS as a system, and the standardized test of Korea Testing Certification.

The efficiency measurement test for the variation of input voltage and output load of single SMPS was conducted by applying an actual power load (Fig. 8(b)) to a wireless communication module (Fig. 8(a)) to review the performance of a unit module in the system. 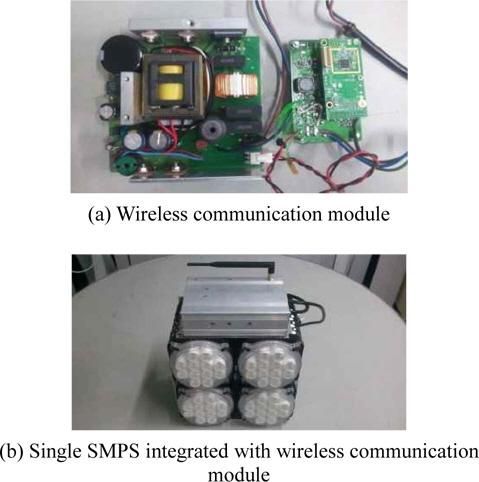 The performance test result is shown in Fig. 9: Fig. 9(a) illustrates the output efficiency with respect to the variation of input voltages on various output loads, and Fig. 9(b) represents the power factor with respect to the variation of input voltage on various output loads. The red line maps the results of 100% output load (200W), the blue line of 50% (100W), the green line of 20%(40W), and the black line of 10%(20W) output load, respectively. 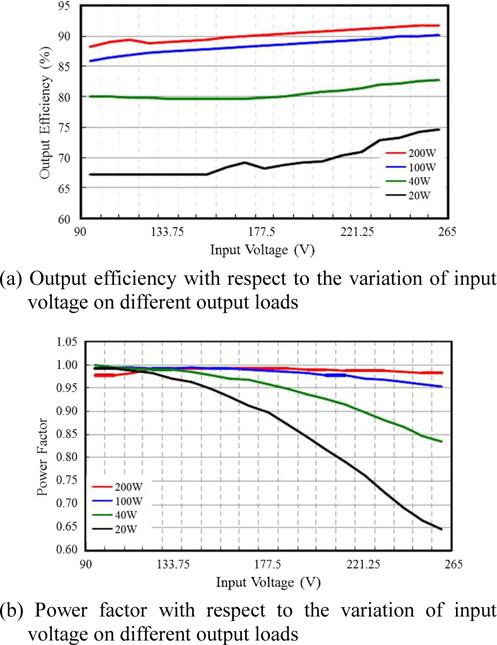 The test results (mean efficiency (90%) and mean power factor (0.98) of the unit module in case of full (100%) output load) confirmed that the efficiency was good only in 100%, and that it was greatly affected by the variation of input voltage and output load. Those results reassure the importance of the system’s function to control output power according to the variable load.

Output measurement test for multiple SMPS was conducted to review the output power control function of the proposed system. The remote control part of the proposed system is combined with a number of multiple SMPSs. But, the experiment was performed using a set of multiple SMPS for simplicity: the experiment was conducted in the test environment where LED for load, three single SMPSs, PFC for power regulation, interface board for control and communication, server for communication and data saving, and tablet (Android platform) for remote control were set up as shown in Fig. 10. 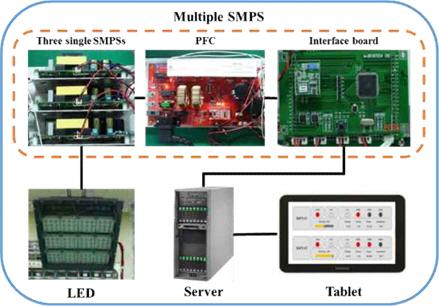 The efficiency measurement test result obtained using the proposed multiple SMPS system is shown in Fig. 11. Fig. 11 represents output power according to load, the blue line standing for 200W power (one single SMPS is used), the green line of 400W power (two single SMPSs are used), and the orange one of 600W power (three single SMPSs are used), respectively. The experimental result confirmed that output power could be efficiently controlled by providing the power (200W, 400W, 600W) which is proper to the variable load conditions (variation of LED’s dimming duty). 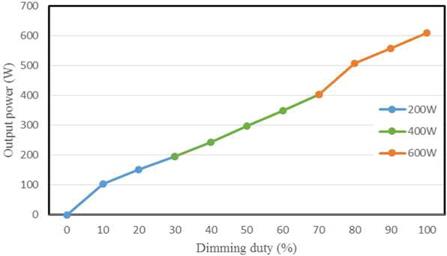 The standardized test was conducted under the supervision of Korea Testing Certification for objective verification. The experiment was conducted under the conditions of 600.52W of loaded output power, 21-25℃ Ta (ambient temperature) and 20-40% RH (relative humidity). Each category was measured after preheating each module with electric power loader for ten minutes under full load condition. The certified results are given in Table 1.

The test result (90.3% efficiency and 99.76% power factor under full load) obtained from the standardized test objectively and officially certified the performance of the proposed system, and also confirmed that output power matching the load could be supplied in an efficient way using the proposed multiple SMPS system.

In this paper, a wireless network-based multiple SMPS system to control variable load was presented. The proposed system allowed an efficient power supply up to 600W by integrating 200W unit-module-type SMPS (called single SMPS), our previous work, and stable power supply by providing output power control based on variable load and wireless network-based monitoring. The efficiency with respect to various output loads was examined and the performance was also reviewed by the measurement test for output power, and finally received the official certification by Korea Testing Certification. The test results obtained from both the input voltage and output load variation verified that the performance of the single SMPS under 100% output load was excellent (mean efficiency was 90%, and mean power factor was 0.98). The level of performance (efficiency and power factor) of the single SMPS was low under the load less than 100% (50%, 20%, 10%), which highlighted the importance of the system’s output power control based on variable load. From the measurement test results for output power under the load (variation of dimming duty in LED), it was confirmed that the proposed system could enable controlling the output power proportional to the variable load, which efficiency was objectively assessed by the national standardized test.