Object detection is a fundamental problem for many computer vision tasks, e.g. surveillance, traffic analysis, clinical diagnosis, face recognition, and robotics. Substantial progress have been made on object detection for the past few years, scaling up to thousands of object categories and obtaining industry-level performance [1, 2]. However, the existing methods remain time consuming for many practical applications [3], which is caused by evaluating a large number of windows in the sliding window search framework [4]. In addition, sophisticated features and classifiers would further decrease detection speed [1].

Notable works for increasing detection speed can be broadly classified into three categories: cascade classifier [2, 5], selective window search [6] and fast feature extraction [7]. Cascade classifier first proposed in [5] effectively saves the detection time by rejecting many true negatives in the early stages of the cascades. Then, some improvement work [2] was done to increase detection precision and speed. However, the existing cascade approaches are still suffering from time-consuming training.

The second category, i.e. selective window search, speed up detection by avoiding the useless search over non-object regions. In [8], the authors proposed an efficient window search using a branch and bound technique. However this method has strict requirements over the classifier score that are not met by most of the existing classifiers. Additionally, several works [6, 9, 10] search objects using coarse-to-fine strategy. For example, Gualdi [6] searched the image toward the area where the target objects are more likely to be found in an iterative manner. Successful detections at coarse resolutions yield to refined searches at finer resolutions. Nevertheless, the speed-up by only using the selective window search strategy is not obvious.

Improving the feature extraction is another efficient work to speed up the detection. Viola and Jones [5] introduced integral images for fast feature computation, but the simple feature was also verified to decrease the detection precision. Recently, channel feature computed by approximate algorithm [7] achieved state-of-the-art performance with the fastest in the literature. However, the high-dimensional channel feature would increase the computational cost in evaluating each window.

To overcome the aforementioned limitations of existing methods, this paper proposes a cascade selective window method (CSW) for fast object detection in terms of three aspects: First, high-dimensional image channel feature is compressed by a sparse projection matrix, which reduces the evaluation time of classifier. Second, this work uses a generalization of the cascade architecture to design a soft cascade SVM classifier, which generates a detection performance comparable to that of the best published ones [2] while allowing for faster training. Third, this work proposes a coarse-to-fine window search method, which is introduced into soft cascade SVM classifier to further increase detection speed. Fig. 1 shows the flowchart of the proposed detection algorithm. 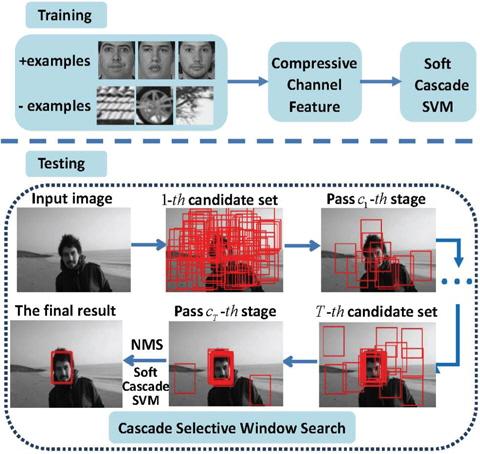 Fig. 1.The flowchart of the proposed detection algorithm

Given an input image window, several channels with the same dimensions are first computed by [7] (See Fig. 2). Sum over each rectangular channel region serves as a first-order feature and can be computed efficiently using integral images [5]. Then all of these first-order features are concatenated to form a high dimensional feature vector . This paper intends to use a random measurement matrix to project onto a vector x∈ℝk in a low dimensional space, namely x = Av . The random matrix A needs to be computed only once off-line and remains fixed throughout the detection process.

The work in [11] proved that if v is compressive (such as audio or image) and the random matrix A satisfies the restricted isometry property, v can be reconstructed with minimum error from x with high probability. This theoretical support enables us to classify the highdimensional features via its low-dimensional random projections. A typical measurement matrix satisfying the restricted isometry property is the random Gaussian matrix . However, as the matrix is dense, the memory and computational loads are still high when h is large. To solve this problem, a very sparse random measurement matrix [12] is applied in this paper to approximate random Gaussian matrix, where the entries is defined as:

As the dimensionality h is very large, many entries in the matrix are zeros. As shown in Fig. 2, only the nonzero entries in A and the corresponding first-order features are involved in computation, so computational cost is dramatically reduced.

To begin with, a linear SVM model is learned by using compressive channel features of training samples, as shown in formula (2).

where is the j-th dimension feature’s weight.

Based on linear SVM model, this work proposes a post-training process for each stage of cascade (as shown in Algorithm 1). Firstly, from all the dimensions of feature, this work selects the most discriminative one mopt to construct the first stage of cascade . The rejection threshold of the first stage is defined as the minimum response of all the positive samples, i.e. . Compared with weak classifier using any other dimensions (except mopt ), f1(x) removes the most negatives, while lets all the positives pass to the next stage. Then this work selects the optimal dimension of remaining ones, just as the selection in the first stage. The second stage is obtained by adding the optimal one to the first stage. Finally, the entire soft cascade SVM is obtained by repeating the above process until all the dimensions of feature is selected. Note that the last stage is the original SVM classifier.

Intuitively, detection speed can be further increased by introducing selective window search strategy into cascade. Based on this motivation, this paper proposes a cascade selective window search strategy which alternates between estimating object probability density function (PDF) using sampled windows’ object possibility and drawing new windows from the object PDF. Within the proposed search strategy, a window is defined as a 2D vector l = (lx, ly) , being coordinates of the window center. l is also considered as a random vector, and its state space comprises all possible locations of image. Given a window l, we define an object possibility on the i-th stage of soft cascade SVM as:

The main process of the proposed search strategy is shown in Algorithm 2. In the j-th loop, candidate windows Q are obtained by combining sampled windows drawn from object PDF qj−1(l) and reserved ones Sj−1 in the previous stage (step 1). Then the candidate windows which pass the stage cj are reserved as Sj and used to approximate the observational density function pj(l | Sj ) by Gaussian kernel density estimation (step 2). The new object PDF qj(l) is linearly combined with the uniform distribution to the observational density function pj(l | Sj ) (step 3). Adding an uniform distribution on pj(l | Sj ) enable the algorithm to still have opportunity to detect objects that are missed in the previous stage.

The above process is iterated for T times (T = 3 in the experiment). The sampled windows that pass the stage cT ( cT = in the experiment) and have a locally maximum response in its neighborhood ( 5×5 ) are retained (step 4). Final detection result is obtained by judging whether the reserved windows can pass the entire soft cascade SVM. Note that multi-scale object detection can be achieved by employing cascade selective window search on each image scale.

In face detection experiment, linear SVM is learned using L1-regularized L2-loss SVM tool [13]. The initial training set consists of 8625 frontal upright faces rescaled to a resolution of 50×36 , as well as 20000 non-face windows. New bootstrapped non-face windows are continually added during training. The training result is a linear SVM classifier consisting of 2479 features. Then a soft cascade SVM is learned as described in Section 2.2.

Fig. 3(a) and (b) depict the precision-recall curves for CSW and the comparison cascade-based methods on two idealized datasets (BioID and Caltech). The experimental results show that the three soft cascade methods achieve almost the same detection precision, and outperform the hard cascade Adaboost. To provide more practice testing, we select the ESOGU dataset, whose images contain faces appearing at a wide range of image positions and scales, and also complex backgrounds. Experimental result on ESOGU dataset is shown in Fig. 3(c). It can be seen that detection accuracy of CSW is the highest, followed by soft cascade SVM and soft cascade Adaboost, and that of hard cascade Adaboost is the worst. CSW achieves 93.5% detection precision at 95% recall rate, exceeding the other two soft cascade methods by about 1%. It can be concluded that: (1) Hard cascade classifier has the flaw that valuable information is discarded at each stage. Soft cascade classifier addresses the problem and obtains higher detection accuracy. (2) Compared with sliding window search, selective window search which captures less windows in non-object area can effectively suppress false positive, (3) Soft cascade SVM has comparable performance as soft cascade Adaboost. 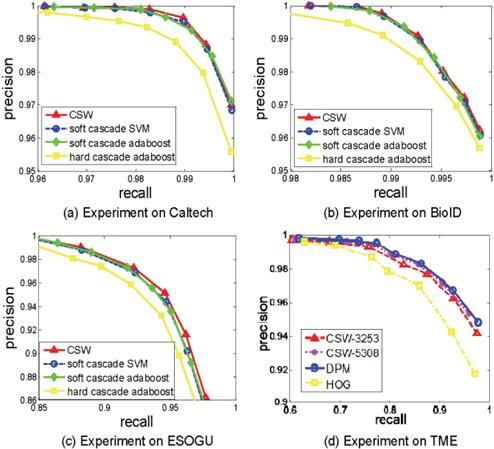 Car detector is learned as well as face detection experiment does. The positive samples come from the MIT car datasets, and the total number of negative samples is about 80000. Moreover, we manually choose 500 testing images from the TME Motorway dataset, which is composed of 28 clips for a total of approximately 27 minutes with vehicle annotation. Fig. 3(d) shows the detection performance of CSW and two baseline methods. It can be seen that detection accuracy of CSW is higher than that of HOG method [14], and is a little bit lower than that of DPM [1]. Specifically, CSW (3253 features) achieves 96.5% precision at 92% recall rate, compared to a 94% precision for HOG and a 97% precision for DPM. When CSW method increases feature dimension (up to 5308 features), it can obtain almost the same detection accuracy as DPM. Fig. 4 shows some detection results of CSW. Obviously, our method can obtain satisfying detection results in case of occlusion, multi-object, rotation and varying illumination. 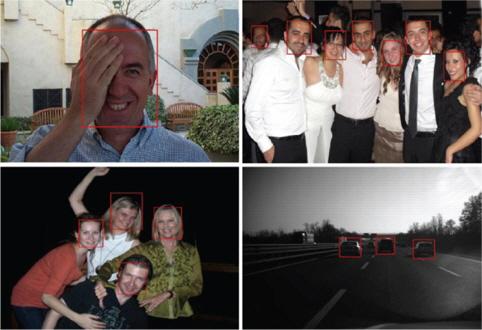 The car detection time of different methods is shown in Table 2. Note that CSW (3253 features) taking about 32ms to detect cars in one image with 1024×768 is the fastest method in the experiment. Soft cascade SVM is slightly slower than CSW. But it can still detect cars in real-time. HOG and DPM which spend more than 1s per image are far slower than ours. In sum, the proposed method is much more competitive because of its outstanding detection speed, although its detection accuracy is a little bit lower than that of DPM.

This paper proposes a cascade selective window method for fast object detection. The main advantages of CSW include: (1) The training complexity of cascade classifier is greatly reduced. (2) CSW significantly increases detection speed by combining well the strengths of cascade and selective window search strategy. Experimental results on face and car datasets show that the computational efficiency and detection precision of the proposed method is superior to the compared method.