In Korea, AC railway systems generally have a feeding system using an autotransformer (AT). The AT is installed at substation (SS), sectioning post (SP) and sub-sectioning post (SSP) to reduce the voltage drop of the catenary system and electromagnetic interference in the communication line. Impedance relay is the main protective relay of the AT feeding system, and is installed at a 55kV terminal at the substation to calculate the fault impedance using fault voltage and current. The impedance relay can set the protection range of zone 1 and zone 2, and separately set the operation time for each protection range of the up and down tracks. Generally, zone 1 is set to 90% distance from substation and time is 0.05 sec, while zone 2 is set as 120% distance and time is 0.2 sec for backup protection. Thus, an accurate estimation of catenary impedance depending on distance is important for accurate setting of an impedance relay [1~3]. But the estimated catenary impedance from the substation is not in proportion to the distance because of the AT installed in SS, SSP and SP. In addition, it is much more difficult to estimate catenary impedance due to the boosting current on AT and the current flow of the other track current, because the double track comprising an up and down track is a tie connection between the up and down track on SP and rail bonding [4, 5].

The Carson-Pollaczek equation is usually used in estimating catenary impedance. But this approach has a theoretical limitation in terms of its application to estimations of catenary impedance, taking into account the current boosting on double track. An artificial ground fault test is carried out using a measurement device in the operation line for actual measurement, but it is impossible to set the protection zone to the fault location because of the artificial fault test limitation in the operation line [6~8]

Finally, the performance of the impedance calculation method using boosting current compensation that is proposed in this paper is evaluated through simulation data depending on various operation and fault conditions of the AT feeding system modeled using a power analysis program.

To reduce the voltage drop in the AT feeding system on double track, a tie connection between feeder wire and trolley wire on the up and down track at SP is used. This causes load current to flow partially on the down track, in addition to the up track, when the train is in operation on the up track.

The current flow pattern has been evaluated through previous studies, and the overall current flow on the double track is as shown in Fig. 1 [8]. 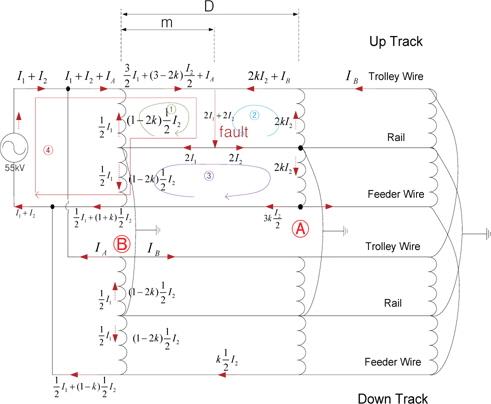 Fig. 1.Current flow of between substation and subsectioning post

4 closed loops are arranged and voltage equation is presented in order to calculate the catenary short circuit impedance in Eq. (1).

Current division ratio at Ⓐ in Fig. 1 is as shown in Eq. (2) according to the characteristics of the AT feeding system in Fig. 2[7]. 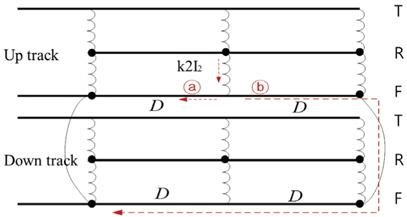 Current IA and IB depending on current division at point Ⓑ in Fig 1. are as shown in Eqs. (3) and (4) according to the characteristics of the AT feeding system shown in Fig. 3. 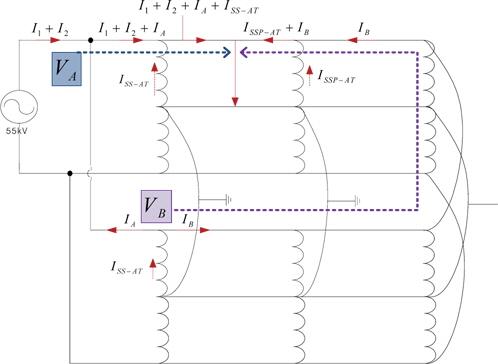 Fig. 4 shows the fault current division on the catenary of the up and down track when short circuit fault occurs between SSP and SP on the up track. Catenary impedance (Z55kV) is calculated as shown in Eq. (5) by the voltage equation based on current division characteristics. 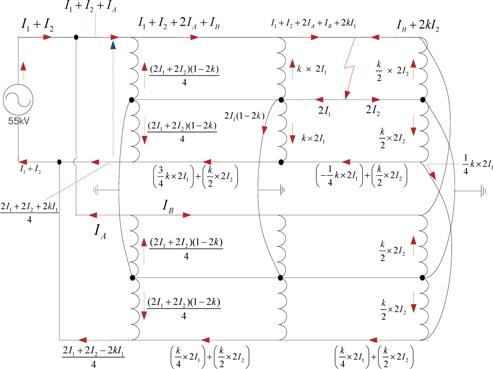 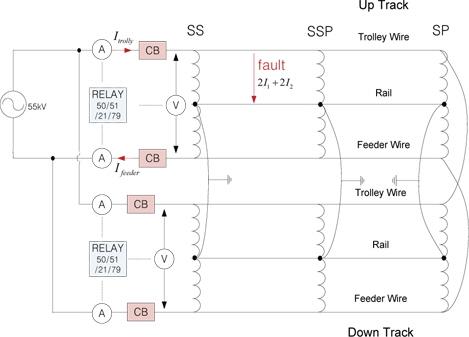 2.4 Calculation of catenary impedance considering boosting current of other tracks

To verify the performance of the catenary impedance technique considering boosting current compensation, we model an AT feeding system using a power analysis program(PSCAD / EMTDC) in Fig. 6. For AT feeding system, we model a 3-phase 154kV module supplied from a power company, a railway substation module which converts to two single-phase 55kV, an AT module and a catenary module. The distance between SS, SSP and SP is set as 10km, and the up track and down track are tieconnected at SP. Parameters of each component are provided in Table 1 [9~11]. 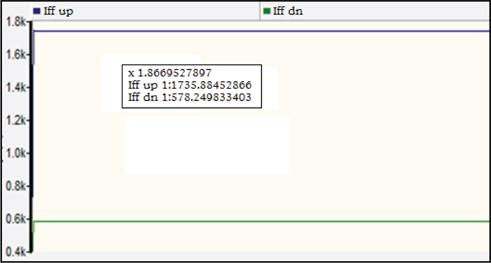 To verify the current division characteristics on point Ⓑ, we compare the value estimated using Eq. (3) with the value obtained through the simulation output. Fig. 8 shows the current magnitude divided on Ⓑ, which is almost the same as the estimated value. 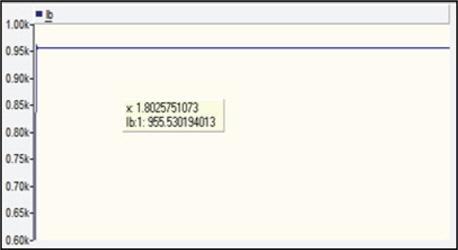 Short-circuit conditions are simulated with the AT feeding system model tie-connected up and down track. Eq. (8), which calculates impedance from protective relay, Eq. (10) and the simulation value are compared. To estimate the track impedance only, short circuit resistance between trolley wire and rail is set as 0.001Ω and a simulation of a short circuit between trolley wire and rail is carried out at 100m intervals starting from the substation. 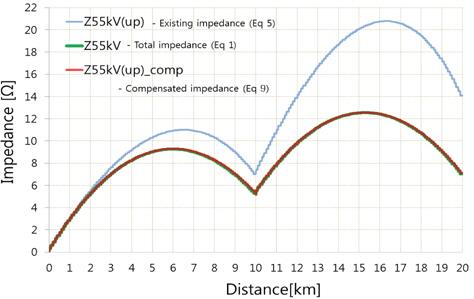 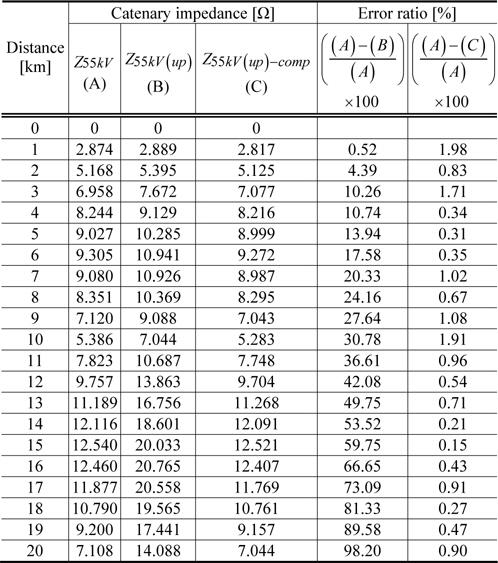 As shown in the simulation output, there is a significant difference between existing impedance estimated by impedance relay and real total catenary impedance. In particular, between SSP and SP the maximum error is doubled because of the increased boosting current. Consequently the farther the distance from the substation, the greater the estimation error.

On the other hand, when an impedance estimation technique that compensates boosting current is applied, maximum error is about 2%, which is considered to be almost the same as catenary impedance. Thus, an estimation technique that considers boosting current between up and down track can more accurately estimate catenary impedance, which would improve the performance of an impedance-based fault locator.

This paper presents a catenary impedance estimation technique, which is needed to set a protective relay for protecting the catenary of an AT feeding system. As a conventional impedance relay does not consider the boosting current of another track, there might be differences between actual impedance and estimated impedance magnitude. Such an error could cause a malfunction of the protective relay, and reduce the accuracy of the fault locator. Therefore, this paper presents a technique of compensating boosting current based on current division characteristics depending on impedance distribution of the AT feeding system to minimize errors in the estimation of magnitude by protective relay compared to actual value.

After verifying the performance using the operation data obtained from an actual AT feeding system, the technique could potentially be applied to a protection system for protecting catenary.