Power system restoration following a massive blackout starts with re-energizing Primary Restorative Transmission (PRT) systems at first. As power systems have been gradually enlarged and become more complex, periodical evaluation and reassignment of PRTs are needed. So far it has been decided by try and error approach by corresponding human experts to analyze and evaluate them. This paper presents an intelligent system that finds optimal primary restoration paths using analytic and heuristic knowledge from PSS/E data, and suggests an optimal PRTs depending on the condition of Ferranti effect or a reactive power capability margin of black-start generator. This system was tested in Korea Electric Power system, and showed a promising result.

When a massive blackout occurs, fast and reliable power system restoration is very important since the social impact including economic loss is so enormous. Although restoration strategies are slightly different in each country as restoration methods are dependent on faults, voltage levels, structures of transmission grid, and equipment of its own power system, it is clear that during the first stage of restoration, Black-Start Generators (BSGs) that are usually hydro type in Korea, should supply cranking power to Primary Supplied Generators (PSGs) having big capacity through so called primary restorative transmission lines in case of wide area blackout [1-6].

However, as issued by NERC [7], experience has shown that in general remote black-start are difficult and costly to schedule and test.

This paper presents an expert system that finds feasible paths for RB path using analysis of Ferranti effect, reactive power capability of black-start generators. As mentioned before, small hydro generators are used as black-start units in Korea. However, so far the reactive power capability of round rotor type generator is known. The reactive power capability of salient pole generator is presented here including several analytical results [15]. This system consists of three modules that are a data conversion module, an expert system module, and a static analysis module. The data conversion module extracts network topology and system parameters from PSS/E data, and transfers them to the expert system and the static analysis modules. The expert system module finds a feasible path at the transmission grid, and transfers information about the path to the static analysis module. Then, it figures out the terminal voltage, transmission line charging capacity, and reactive capability limitation of black-start generators, and returns the result to the rule base of the expert system.

This data conversion module extracts data that are required for this system from PSS/E raw and dynamic data, and transfer them to the expert system and the static analysis modules. Information about power system topology, parameters of transformers and transmission lines are extracted from raw data, and generators’ synchronous reactance value and rotor type that is related to reactive capability limitation of the generator are done from dynamic data. Data flows between the modules are shown in Fig. 1.

Fig. 1.Modules of the system

The Remote Black-start (RB) planning expert system also consists of database, rule base, inference engine, and GUI as usual. The problem representation and knowledgebase is developed as follows.

To find a feasible and optimal RB path, at first available topological path identification is required. And the several analysis should be considered such as reactive capability limitation to prevent self-excitation and Ferranti effect. For example topologically available paths are 5-2-1, 5-3-2-1, and 5-4-2-1 in the sample network in Fig. 2. The problem is modeled using the state space representation method of AI as shown in Fig. 3. 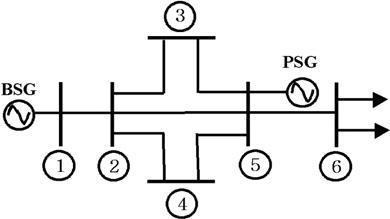 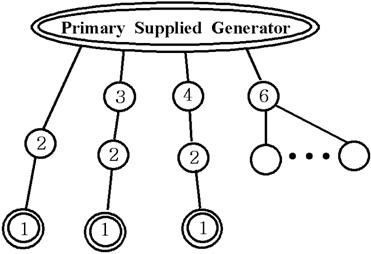 The rule-base of this expert system module comprises basic rules for searching and inference as well as rules for preventing infinite circulation of path search in loop networks. In fact this is the bottle-neck for practical application of AI techniques to power systems.

If overvoltage appears at a receiving end of PRT line by Ferranti effect when the unloaded transmission line is reenergized, this problem can be resolved by compensating lagging reactive power such as picking-up loads at substations. The charging capacity of the PRT line considering the compensation effect by load pick-up, reactance of transformers, and line reactance of the PRT system can be calculated as follows.

Single line diagram consisting of two BSGs, step-up transformers, and a PRT line is shown in Fig. 4. At the receiving end point, VN and ISN are calculated using the desired voltage Vend and IRN at first. Vend is usually 1.0pu and IRN is zero at the black-start condition.

As the PRT line consists of successive pi networks as shown in the figure, V1, IS1, IZ1 can be calculated by using Eq. (1)~(3) repeatedly. Then Vg, Igi are calculated finally. Although the power flow has been widely used by now, the suggested calculation is definitely very simple and fast. However this method is available only under the support of network topology processor of the expert system. It is clear that future power system operation will utilize the convergence technology together with artificial intelligence and hierarchical cooperation technique.

Since Korean Power Systems adopt the all-open switching strategy, all CBs should be open for fast restoration except the CBs which are inserted in a PRT line after wide area blackout. When a T/L is reenergized under all-open switching condition, overvoltage may be induced at the receiving end. This overvoltage can cause the dielectric problem of the buses and transformers of each substation and generators of big capacity which are connected to the receiving end of the T/L. Therefore, terminal voltage of the BSGs should be determined to keep voltage of the all components of the PRT system under operating limit.

Terminal voltage of the BSGs can be found from Eqs. (4)~(7) showing relation between some factors, which are sending voltage(V1), step-up transformer impedance, and current through jXT . Also, voltage ratio of the transformer should be considered.

4.3 Charging capacity of the PRT line

Charging capacity can be found when the lagging reactive components such as picked-up load and inductance of T/Ls and transformers are considered. Therefore, T/L Charging Capacity (TCC) to consider compensating effect is the same as reactive power which BSGs supply. Current from each BSG can be found when Vg of Eq. (7) is substituted for Eq. (5).

The RCL of BSGs should be larger than charging capacity of the PRT line to prevent self-excitation, and this RCL is determined depending on rotor type of the BSG.

As RCL of Non-Salient Pole is already known, only the RCL of salient pole generator is introduced in this paper.

Then finally when δmax is 90°, the RCL of a salient pole generator is expressed by Eq. (19). 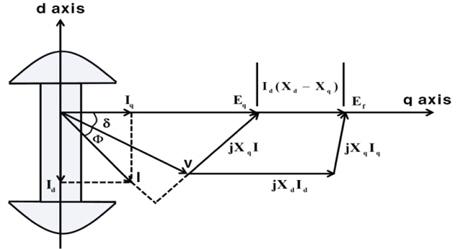 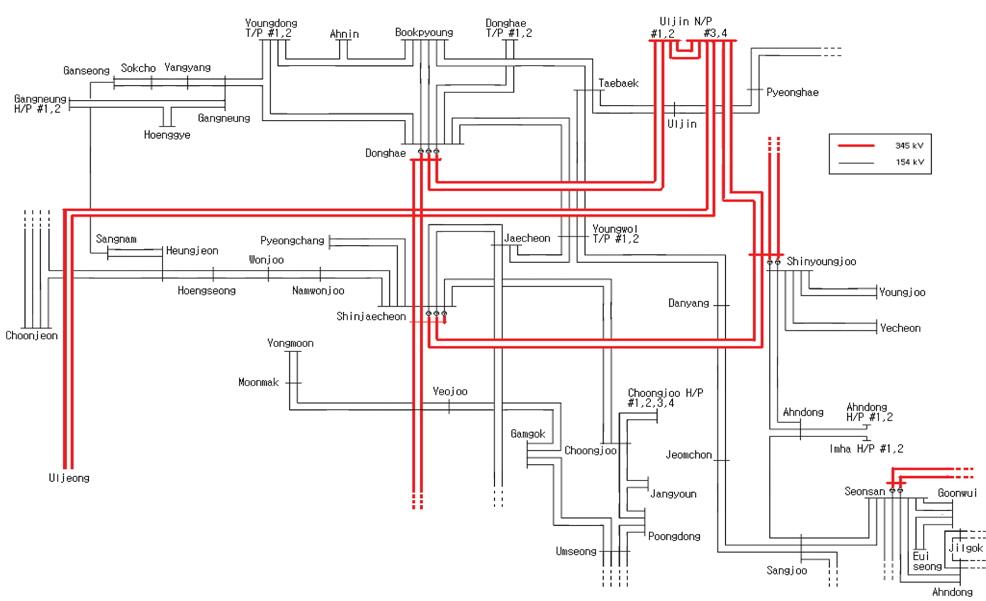 Fig. 6.The structure of Young-dong system 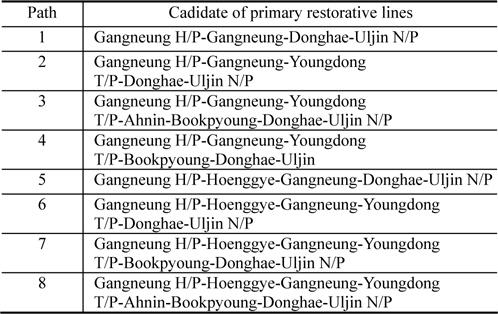 PRLs are very basic skeleton for restoration when a power system is totally or widely collapsed.

In this paper, an expert system is proposed for the optimal primary restoration planning. This system generates feasible paths using PSS/E data automatically at first. And then the optimal path is suggested by using analysis of Ferranti effect and reactive capability margin. It will be a basic component to the self-healing power system - the final goal of smart grid in 2030. Application to Korean power system showed a promising result.