It is critical to secure transmission lines against faults to maintain stable operation of power systems. Fault detection, classification, and the location of transmission lines are very important tasks in protecting electric power systems. Fast fault detection is needed to protect the system components from the harmful effects of a fault. Fault-type classification is needed to analyse the original signal with appropriate signal processing schemes such as the Wavelet Transform (WT). The WT is a mathematical tool used in a wide variety of fields for signal and image processing applications [1]. WT is also useful in power system transient analysis, as it is based on the time and frequency domain simultaneously [2]. WT can be used on a broad frequency range rather than a specific frequency domain, which makes WT very useful for analysing the transient phenomena in a power system. For this reason, WT has been applied in protection algorithms to detect, classify, and locate faults in power systems. Although WT has good features, typically, it is not used alone in analyses of power system transients, because the transformed signals still contain a large amount of data which requires further processing.

Thus, fault-type classification has been performed with several other methods, such as traveling waves [3-4], adaptive Kalman filtering [5], discrete wavelet transform [6-7], fuzzy logic, neural networks [8], a fusion of different artificial network techniques, and combinations of wavelet and hyperbolics [9]. Neural networks have disadvantages in that they require a considerable amount of training effort to obtain good performance, especially under various operating conditions such as system-loading level, fault resistance, and source impedance. Another disadvantage of neural-based networks is that the results of training may not cover some cases, as the starting point is chosen at random and can end up in minimum times [10-13]. Wavelet Singular Entropy (WSE) using WT with Singular Value Decomposition (SVD) and Shannon’s information entropy theory have been proposed [14-16]. SVD can be useful to decompose large amounts of data into small square matrices.

In this paper, an algorithm that includes fault detection and classification is proposed for wide-area protection. An algorithm for fault detection and classification is presented based on Wavelet Singular Value Decomposition (WSVD) combined with WT and SVD [17]. Singular value of Approximation coefficients (SA) containing low frequency components and part Sum of Detail coefficients (SD) containing high frequency components derived from WSVD are defined, and the mother wavelet is selected as a characteristic of WSVD. The characteristics of SA and SD are analysed in various fault conditions to detect the faults and classify between those faults. An algorithm is proposed based on the results of SA and SD to detect and classify various faults. The various simulation results are performed and the results are analysed. In summary, we propose an algorithm which can detect and classify faults in transmission system using WSVD for wide-area protection.

The nationwide electrical power transmission network in Korea was modelled using the EMTP-RV. The system parameters used in modelling are the real system data in the PSS/E files provided by KEPCO and KPX [18].

Fig. 1 shows the wide-area transmission system of Korea modelled by EMTP-RV [20]. Simulations are performed in steady state for 10 seconds in order to validate the performance of the modelled network. Frequencies are measured at the nine buses: Dongseoul No. 1, Sinsiheung No. 3, Asan No. 3, Sinjechun No. 3, Chungyang No. 3, Seodaegu No. 3, Uiryung No. 3, Singoangju No. 3, and Bukbusan No. 3s. 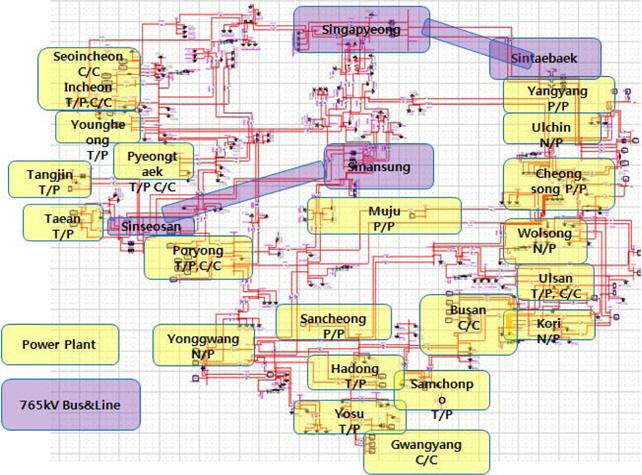 In the simulated results, the lowest frequency is 59.9931 Hz at Uiryung No. 3, and the highest frequency is 60.0002 Hz at Seodaegu No. 3. As the frequencies vary within less than 0.01 Hz, we can confirm that the modelled network operates in a stable state.

The WT is able to extract time and frequency information at the same time from the original signal [23-26]. The Discrete Wavelet Transform (DWT) of a signal is defined as:

Singular Value Decomposition (SVD) is a powerful and effective tool to extract special features in linear algebra. SVD is a factorization of the matrix. For any matrix , matrix A can be decomposed as:

Here, S diag(σ1,···σr ) = is a diagonal matrix by, r × r and σ is called a singular value that is calculated by SVD. SVD has information about the magnitude of the signal, which be used for analysis [26-27].

Wavelet Singular Value Decomposition (WSVD) is a type of wavelet transform with SVD [17]. The approximation and detail coefficients a1 and d1 are calculated through the decomposition and reconstruction process on the level 1 DWT with the signal x from a moving window of size n. The sizes of the x, a1, and d1 become n as well. The Singular value of Approximation (SA) is a singular value to be calculated by (4) using a1. The Sum of the absolute value of Detail (SD) is calculated by (5) and (6) using d1.

Here, i is the starting time of sampling of the moving window, and lf is the filter size according to the mother wavelet. In order to suppress the negative effect of the DWT filter caused by applying the moving window techniques, SD1 is calculated to remove the value at both ends of d1 during the calculation. The value of d1 is calculated by a decomposition and reconstruction process of the level 1 DWT of the signal s[n] using Daubechies 4 (db4) as the mother wavelet based on a moving window with a size of 24 (a half cycle). In this process, assuming that the size of the filter is 8 and the high-pass filters are HD1, HD2, ···· and HD8, then d1[1]-d1[6] and d1[19]-d1[24] do not have a pattern in d1 because of the influence of duplicated signals for convolution multiplication. However, d1[7]-d1[18] have a pattern in d1 because they are not impacted by the signal duplication for convolution multiplication. Fig. 2 shows a sine waveform of one cycle as an original signal. a1 and d1 are the results of the decomposition and reconstruction process of db4 with the level 1 DWT. The d1 curve shows fluctuation at both ends. 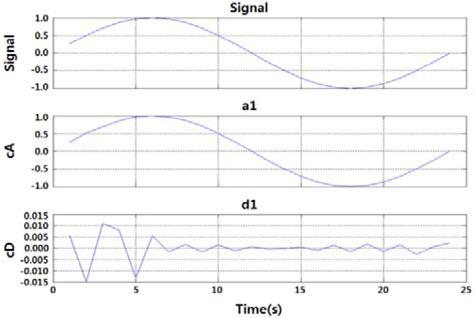 Fig. 2.a1 and d1 for a sinusoidal signal

The simulation conditions are as follows:

The measured original signals are each phase voltage measured at bus 1 or bus 2 after the faults. The sampling frequency is 2.88 kHz, the size of a moving window is 24 (half cycle), and the mother wavelet is db4, which is generally used for analysing transience in electrical power systems [26-28]. Figs. 4 and 5 show the SA and SD of each simulated fault. In Figs. 4 and 5, (a) shows SLG, (b) shows DLL, (c) shows DLG, and (d) shows three-phase fault (3Φ). 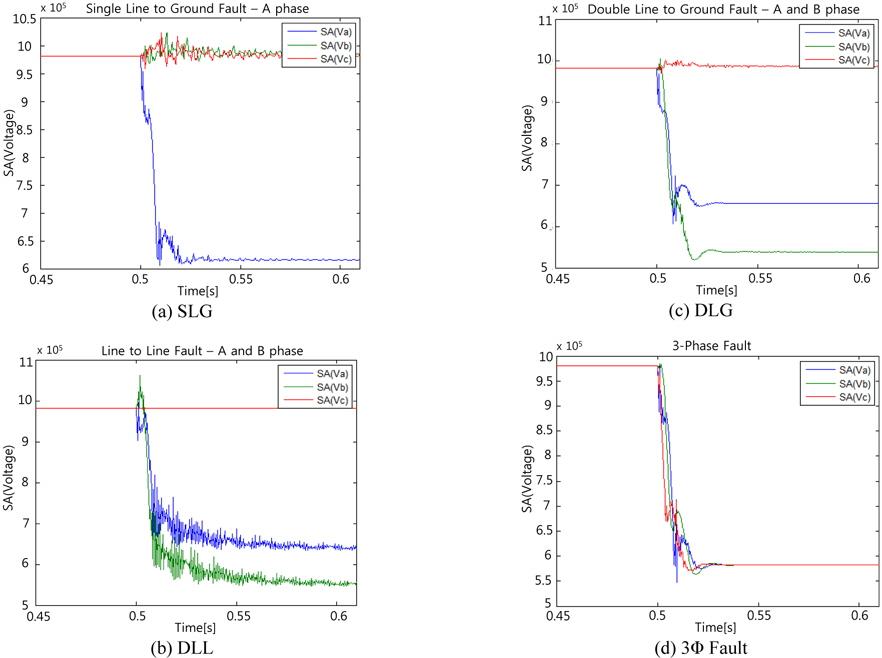 Fig. 4.Variation of the SA by fault type 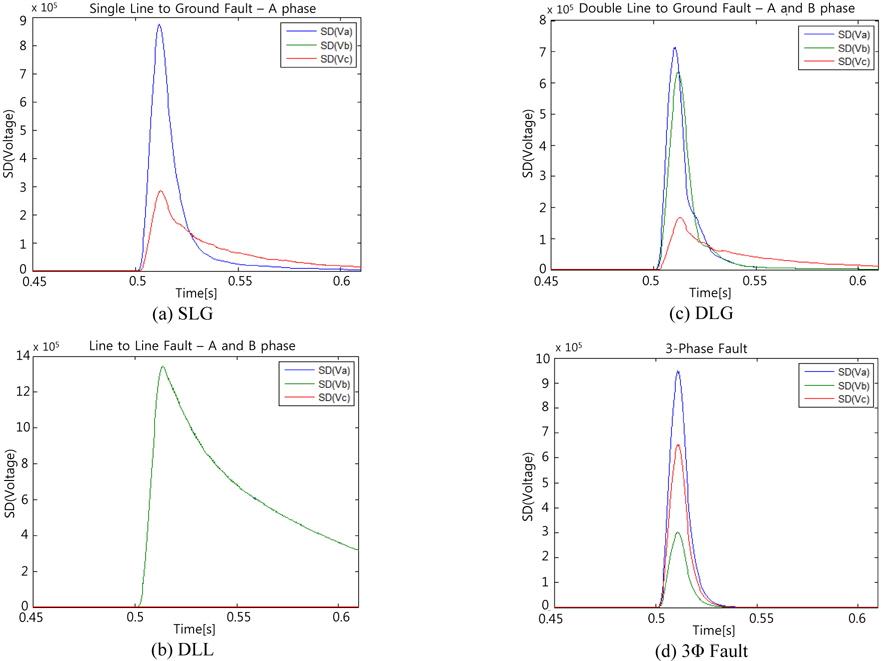 Fig. 5.Variation of the SD by fault type

Simulations of generator loss are performed by tripping the Busan C/C, Ulsan C/C, Ulsan T/P, and Kori N/P. The simulation conditions include the tripping generator group, with a maximum voltage of phase and a minimum voltage of phase a, and a total of 42 simulations are conducted. Each group of selected generators is connected to the bus of each generator group, which include 8 units of Busan C/C, 6 units of Ulsan C/C, 3 units of Ulsan T/P, and 4 units of Kori N/P. The measuring point of voltage is the North Busan 3S bus, and the signals are processed with WSVD.

Fig. 6 shows the variation of SA and SD caused by generator loss. SA shows a similar pattern to that of DLL or 3Φ fault. SD shows the results to be discriminated with SA that are different from those with a 3Φ fault. However, the maximum variation rates of each phase are similar. 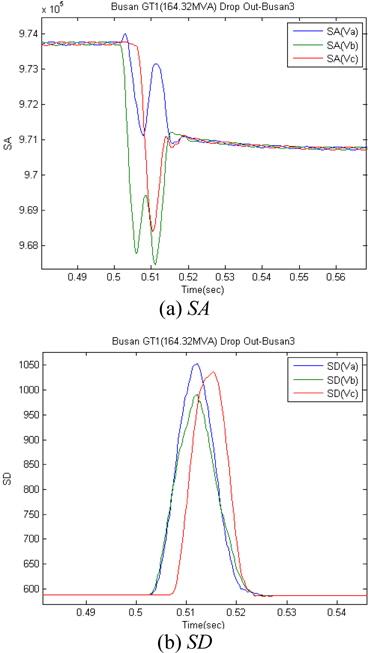 Fig. 6.Variation of SA and SD by generator loss

Fig. 7 shows the variation of SA and SD by load shedding. SA increases by 0.01 p.u. due to the load shedding of 350 MVA. SD shows the results between DLL and 3Φ fault. The variations of SD are doubled compares to the normal state.

Fig. 7.Variation of SA and SD by load shedding

4. Algorithm for Fault Detection and Classification

4.1 Method of the fault detection

The characteristics of SA and SD according to the fault types were analysed in Section 3. Based on the characteristics, SD is selected to detect faults. This is because the variation of SD is more severe than that of SA when a fault occurs.

Fig. 8 compares the results of WSVD transformation of the 345-kV phase voltage signal and that of the same signal with SNR 100 of Additive White Gaussian Noise (AWGN). SA and SD for the signal only remain unchanged, while those for the signal with AWGN show variations. Apparently, SD fluctuates much more than SA when noise is added. Fig. 9 shows the differential value of SD with 1 cycle. The maximum differentiated value is 0.6. Therefore, the threshold value to detect a fault in the 345-kV transmission line, α, is set to 1 with some margin. The value can be adjusted by considering conditions of the power system and operational requirements. 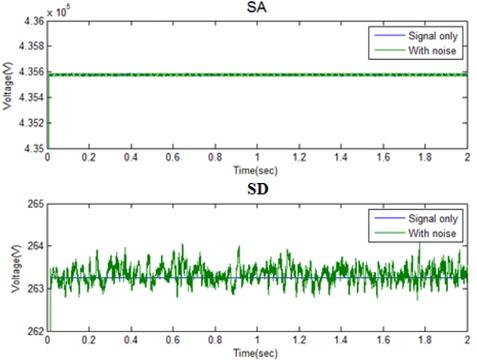 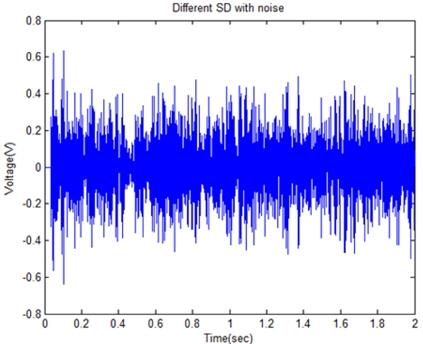 NSA is the ratio of the absolute value of SA in normal conditions to that of the maximum change of SA for a cycle after a fault calculated in (7). The (8) calculates the last NSA to select the faulty phase. If the value is bigger than the threshold β, it becomes 1, but it is otherwise 0.

NSD is the ratio of the absolute value of SD in normal conditions to that of the maximum change of SD for a cycle after a fault, as shown in (9). The threshold values associated with NSD are δ = 0.001, γ = 0.5, and ζ = 0.75. The threshold value δ identifies line-to-line faults, γ double line-to-ground faults, and ζ three-phase faults from generator loss.

NSS is the ratio of the absolute value of SD in normal conditions to that of the maximum change of SD for a cycle after a fault, as shown in (10). η is the threshold value associated with NSS, and is set at 0.75. It identifies three-phase fault from generator trips.

β, δ, γ, ζ, and η used as threshold values that are related to the ratio values of SA and SD, and they are not directly associated with the transmission system.

The proposed algorithm detects and classifies the fault using the methods described in Sections 1 and 2. 12 types of fault are numbered as shown in Table 2. Figs. 10 and 11 describe the proposed algorithm, and pe in the figures is the sample number for one cycle.

Table 2.The variable value of each fault type 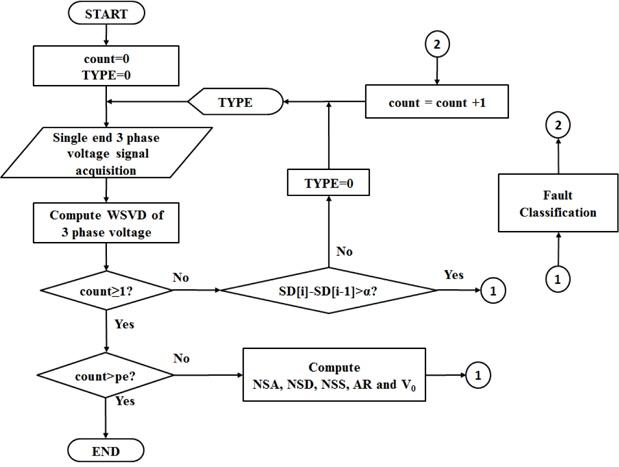 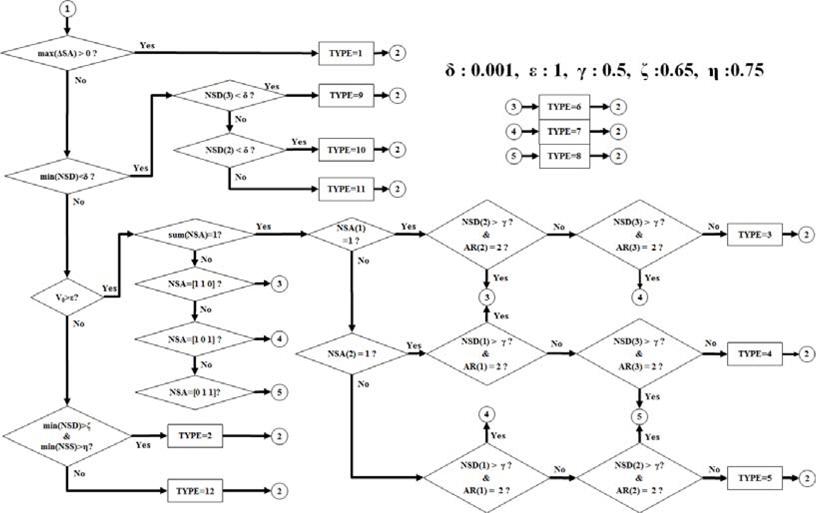 The various faults are simulated in the 345kV transmission system presented in Fig. 3, to verify the algorithms. A total of 56,744 simulations are conducted, until the failed cases become 20 times.

Faults are simulated using EMTP. The results from EMTP were converted to a format compatible to MATLAB, and WSVD was performed in MATLAB. 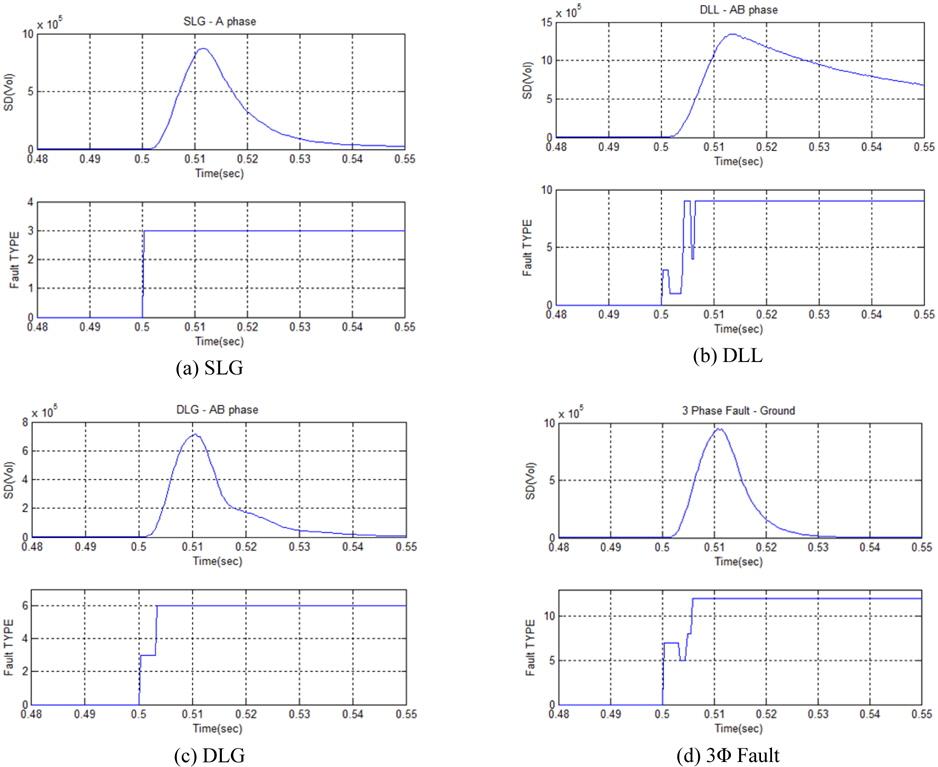 Fig. 12.Results of fault classification for the various fault types 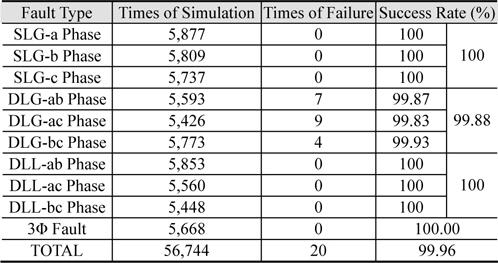 The most failed cases for the fault type classification are DLG faults with the distance of 23 km and 277 km from the bus. The three phase voltage, SA and SD of this case are shown in Fig. 13. In the cases of the DLG fault, if the distance is 23 or 277 km, it shows that the SA of the faulted phase does not rapidly decrease, hence β of the faulted phase becomes less than 1. As a result of NSA1, the algorithm classifies the SLG fault. However, the fault would be detected, if the detecting period becomes 2 cycles.

By using the proposed algorithm, national wide monitoring and supervising system can be monitoring and classifying of the faults in national wide-area transmission network as a new way redundantly with the SCADA (Supervisory Control and Data Acquisition) and EMS (Energy Management System) in order to be more reliable operation when the signal can be acquired by PMU on national wide.