Electric power as an energy source for transportation is not a new idea. Many plants and distribution systems for electric railways and trams were built early on. But transport over long distances has primarily relied on the use of the internal combustion engine and petroleum fuels. But recently, since Electric Vehicles have begun to get positive responses from drivers, electric power has begun to take on a new role in automobile propulsion systems. As the potential for power plugs for recharging Plug-in Electric Vehicles (PEVs) batteries have been recognized as a power source, the development of hybrid electric vehicles have reached a turning point. The greatest advantage of PEVs is that they can use electric power instead of using gasoline, which is currently used to fuel conventional cars. This is especially true for countries like Korea which heavily rely on foreign supply sources for gasoline. [1]

Accordingly, the innovation of PEVs in the market can be anticipated in the near future, which will bring grid impact in the distribution system. [2-5] Based on these reasons, hyeok jin Son, kyung soo Kook [6] and L. zhao et al. [7] propose simulation methods based on a stochastic and comprehensive model to assess PEVs impact on distribution grids respectively.

PEVs are similar to existing HEVs (hybrid electric vehicles) but PEVs differ in that their power can additionally be supplied from distribution systems. An even greater benefit of PEVs is the much lower cost compared to gasoline for fueling cars. The current price of gasoline, while varying from country to country, is $1.43/liter in Korea, with energy cost amounting to $0.148/kWh (assuming a rate of 9.68kWh/liter). Such cost amounts to more than twice the expense compared to electricity costs in Korea($0.07/kWh).[8]

In addition, most of auto-vehicles are mainly dependent on gasoline or diesel for their energy sources while there are various fuel sources such as nuclear, coal, oil, wind, photovoltaic, etc. in the electric power system. So it is expected to replace a considerable part of fossil fuel consumption by eco-friendly energy if we use the electricity supplied by the power system for our transportation systems. By increasing the portion of renewable energy in the power system we could decrease the energy dependence on fossil fuel energy sources on the transportation sector.

And the energy consumption pattern of each vehicle is different, therefore the electric vehicle is used for distributing the peak load as mobile batteries. The electric vehicle almost charges its battery during off-peak time and provides the electricity to the power system by discharging the battery during peak time. It is called as V2G service which is a new type of service expected to appear in Smart Grid environments. In this kind of context, while HEV are now widely being used, PEVs will likely come to gain greater occupancy of the car market in the near future as PEVs technology develops.

On that basis, this paper analyses the impact of the power distribution system by calculating existing electric power load and additional PEVs charging load in accordance with each scenario on new-town in Korea. This is to estimate total load increases in that region by PEV penetration ratio. Further, the paper interprets the subsequent voltage range for distribution system and demonstrates conditions for countermeasures.

2. Simulation for PEVs Charging by Scenario

In this paper, a region is selected for the case study to analyze the impact of EVs to distribution power network. It is the 3rd construction area in Dongtan New-Town in which many commercial buildings, apartments, and houses are concentrated. The following sections explain regional and load characteristics of the assessment region composed of 7 district blocks.

The assessment region, 3rd construction area in Dongtan New Town, consists of mainly commercial buildings, residential apartments, and detached houses as shown in the Fig. 1. The regional characteristics are as follows: 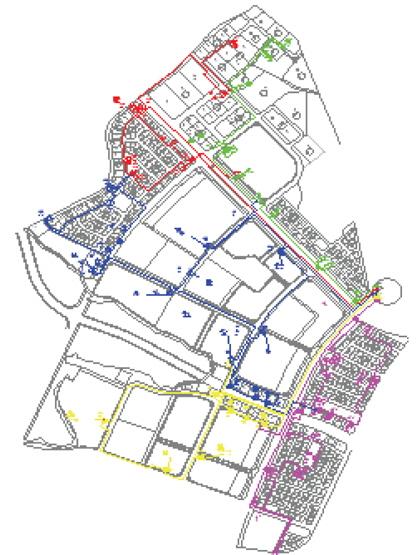 The characteristics of the assessment load are as follows:

The above Fig. 1 illustrates the configuration of the distribution system which is supplied by 5 distribution lines from the Byung-Jum substation stated above. Table 1 shows the load characteristic and the number of households on each distribution line.

Table 1.Load Characteristics of Each Distribution Line in Sample Region 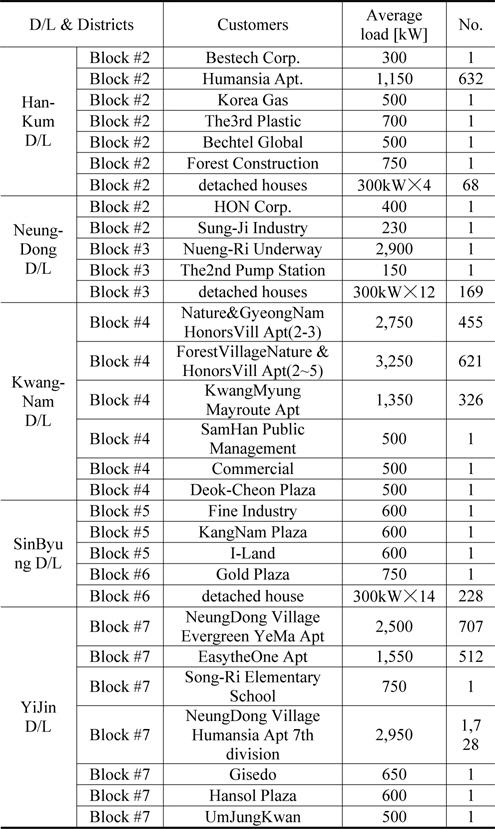 3 scenarios are established about the distribution system in the 3rd construction site of Dong-tan new town. The first scenario is the base case with no additional load by PEVs on the current system load. The second and third scenarios are about 10% and 20% load increases by PEVs to the basic case.

For the case study, this study also assumes the additional conditions below for the case study as follows referring to documents of Better Place in Israel and ETEC (Energy Technology Engineering Center) in U.S.A:

Considering above conditions we simulated the load increases from the basic case by the market penetration of PEVs. Here, the mathematical formulation for calculating the slow and fast charging vehicle loads are as following formula (1) and (2):

Here, the number of households was counted only on apartments and detached houses. The reason is that we assumed there is no additional PEVs load increase caused by commercial and other kinds of sectors. The following Table 2 & 3 show the numbers and load quantities of PEVs based on the scenario 1 and 2.

Table 2.No. of Charging PEVs and loads on both household types (Scenario 1)

Table 3.No. of Charging PEVs and loads on both household types (Scenario 2)

Table 4.Result of totally added loads to the base case by PEVs

3. Simulation of Distribution Voltage Range Based on Penetration of PEVs

Fig. 2 charts the system configurations simulating the D/L of Sinbyeong in Dongtan New Town (shown in Fig. 1) using EMTDC. D/L for Sinbyeong in the Dongtan New Town region was chosen in order to model the electric vehicle charging system under normal conditions. Loads for each line were put at “heavy load” when the simulation was performed.

On the other hand, when the domestic system connection criteria of distributed generator for Korea were observed by capacity, they were as follows:

In addition, synchronization and voltage regulation allowed when the distributed power grid was connected are as seen in Tables 5 and Table 6.

Table 7 presents the end voltage regulations for the initial and end positions of Sinbyeong D/L for the cases with no EVs and a 10% EV penetration under heavy load. As shown, under heavy load and at 10% penetration the voltage regulation departed from the allowed scope of the distributed power system. Therefore as in Table 8, a case study was performed applying ULTC in order to solve the voltage problem. As a result, voltage criteria values stayed within the allowed scope with 10% penetration by the electric vehicle charging system.

Therefore, in this paper, we developed the EMTDC simulation modeling technique to enable us to analyze the impact on the grid voltage changes because of the charging of PEVs. The developed technique was applied to case studies involving new towns. More specifically, using the EMTDC simulation modeling technique, when a heavy load is applied to a power distribution system, the rate of change of voltage was calculated for the corresponding D/L using the PEVs charging penetration scenario, and we assessed the permitted range of voltages that could be connected to the electricity distribution system.

Furthermore, when the voltage change rate calculated for each PEVs charging scenario exceeded the allowed range connected to the electricity distribution system, we conducted an evaluation to determine whether it is possible to adjust it such that it is in the allowed range. This was done by applying ULTC. Based on our results, we proposed the charging capacity of PEVs that can be satisfied the allowed condition for the voltage change rate when connected to the power distribution system by each PEV charging penetration scenario without system reinforcement.

This paper analyzes the impact of PEVs charging using domestic power systems in Korea. Assessment focused on increases in PEVs demand power and distribution system total load, as well as voltage range according to PEVs penetration scenarios. In particular, in order to concretely analyze the impact of PEVs charging in the distribution system, PEVs charging loads were staged by scenario for Dongtan New Town in Korea and total charge load increase was calculated, while an analysis was performed on voltage distribution in accordance with PEVs penetration by scenario for Sinbyeong D/L. And to enhance PEVs charging simulation accuracy in comparison with the existing typical methodology, this paper presents mathematical formulation to calculate the slow and fast charging electric vehicle loads in considering with their number of households by PEVs penetration scenario.

Thus, this paper presents algorithm to analysis load increase and voltage range in accordance with load characteristic in the distribution system by calculating the number of apartments and detached houses, their fast and slow charging capacity in the New Town. Following is a summary of the results derived in this paper.