Power transformer is one of the major and key apparatus in electric power system. Monitoring and diagnosis of transformer fault is necessary for improving the life period of transformer. The failures caused by short circuits are one of the causes of transformer outages. The short circuit currents induce excessive forces in the transformer windings which result in winding deformation affecting the mechanical and electrical characteristics of the winding. In the present work, a transformer producing only the radial flux under short circuit is considered. The corresponding axial displacement profile of the windings is computed using Finite Element Method based transient structural analysis and thus obtained displacements are compared with the experimental result. The change in inter disc capacitance and mutual inductance of the deformed windings due to different short circuit currents are computed using Finite Element Method based field analyses and the corresponding Sweep Frequency Responses are computed using the modified electrical equivalent circuit. From the change in the first resonant frequency, the winding movement can be quantified which will be useful for estimating the mechanical withstand capability of the winding for different short circuit currents in the design stage itself.

High magnitudes of currents in the transformer windings due to short circuit events induce excessive forces in transformer and the magnitude of the fault current depends upon the short circuit reactance of the transformer [1]. In general, the winding currents produce leakage flux which can be resolved into radial and axial components. These radial and axial fluxes interact with winding current to produce axial and radial forces respectively. Depending on the distribution of forces and mechanical strength of the windings, the winding undergoes deformation. If these forces are not properly restrained, a major failure is likely to occur. For example, 1% difference in the heights of HV and LV windings leads to an axial force of nearly 50 kN/m in windings of a 5 MVA three phase transformer during short circuit [2].

As the details about the deformation in terms of displacements is necessary, the literature on computation/measurement of the distribution of forces, displacements and analysis using SFRA are surveyed. G.B. Kumbhar and S.V. Kulkarni [3] computed the force distribution due to short-circuit current of the split-winding transformers using Finite Element Analysis (FEA). J. Faiz, B. M. Ebrahimi, and T. Noori [4] analysed the radial and axial electromechanical forces developed by the inrush current and short circuit current using 2D and 3D Finite Element Models (FEM). Hyun-Mo Ahn and, Yeon-Ho-Oh [5] compared the simulated and measured forces in trans-former windings. Gopalakrishna. S [2] presented the force developed in top disc of the winding and the distribution of forces in each disc using Finite Element Analysis. A.P. Purnomadi and D. Fransisco [6] analysed axial and radial winding deformation using sweep frequency response analysis for the manually displaced windings. In [7], the mechanical damage to a transformer winding is analysed with the help of sweep frequency response analysis using cross correlation method. K. Ludwikowski, K. Siodla and W. Ziomek [8] determined the frequency ranges for detection of the winding deformation for buckling phenomenon in a high voltage power transformer.

In the present work, force distribution and the winding displacements are computed using FEA and compared with the measured values. The change in winding capacitance and inductance due to deformation are calculated using FEA and the corresponding shift in resonance frequencies are obtained from sweep frequency responses. From the change in resonant frequency due to short circuit current, it is easy to quantify the winding displacement.

A 722VA, 10V aluminium wound transformer used by Gopalakrishna [2] is considered for the analysis. The transformer has two identical windings (W1 and W2) with 2 discs per winding as shown in Fig. 1(a) and 1(b). Each disc has 10 turns. The windings are connected in such a way to simulate a transformer with the winding currents in the opposite directions resulting in only axial displacement due to repulsive force. 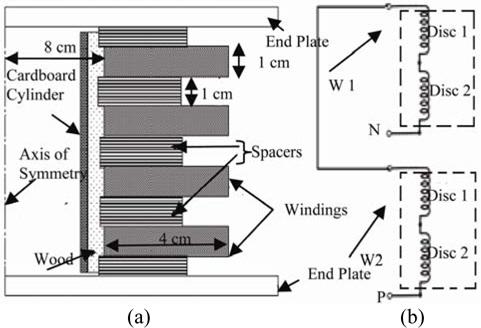 As the short-circuit events result in high mechanical forces in the transformer windings, the short circuit withstand capability of a transformer is of a mechanical nature. As the short circuit current varies with time, the induced force also varies with time resulting in continuous movement of discs. Hence, it is essential to estimate the displacements using transient structural analysis using winding equivalent structural model [9]. To do the transient structural analysis, each disc is represented as lumped mass (M), spacer as spring (K) and the insulation between the discs as dashpot (C). The winding equivalent structural model is shown in Fig. 2. 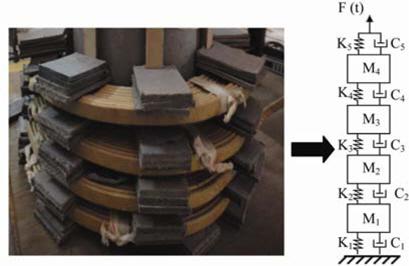 The governing equation for transient structural analysis is given as,

To carry out the analysis, the following parameters are required, Short circuit force vector Fa (t)

Parameters from (3.1) and (3.2) are given as input to Transient Structural Analysis to simulate the transient displacement of the winding

The electromagnetic force distribution in the windings is computed using FEM based Magneto-structural analysis. Both the windings are energised with same current density in the opposite directions. The magnetic vector potential is calculated from magnetic field analysis (2).

where μ is the magnetic permeability, A represents the magnetic vector potential and J (A/m2) is the current density. Electromagnetic forces are produced due to winding currents and the leakage flux in the winding regions and the force on the windings is given by the Lorentz force as,

where F represents the force (N).

The magnetic field analysis on the windings is carried out for short circuit current density of 12 A/mm2. Fig. 3 shows the magnetic flux plot of the winding. 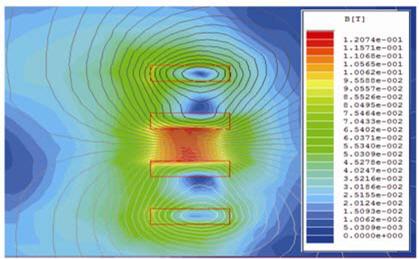 From the magnetic flux plot, it is observed that the axial flux is negligible (as the axial flux produced by W1 and W2 gets cancelled) compared to the radial flux. As a result, the forces on the windings are only in axial directions and repulsive. Fig. 4(a) and 4(b) show the axial force distribution of the transformer. 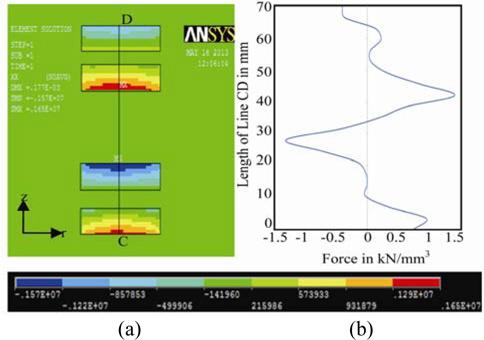 In general, for the energising current

the corresponding force is given by,

Modal testing is a form of vibration test on an object by which natural frequencies, stiffness, masses and damping ratios can be determined. This test is carried out in the Council of Scientific & Industrial Research (CSIR), Government of India, Chennai and the response is recorded. The typical instrumentation setup is shown in Fig. 5. 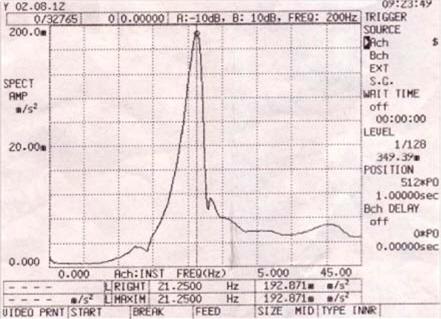 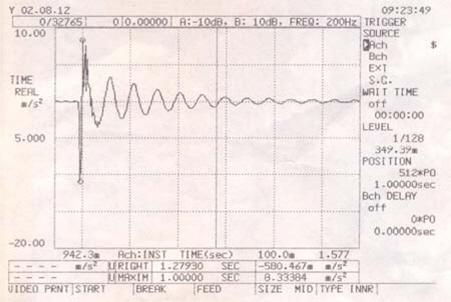 3.3 Displacement due to short circuit force 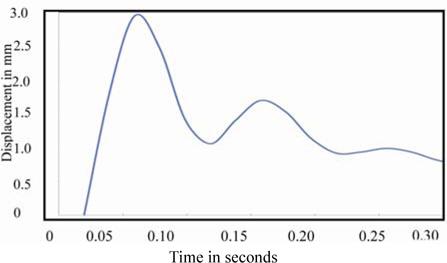 To validate the simulated results, short circuit test as per IEC Standard 60076-5 [10] is conducted on the test object at On Load Gears, Ambattur, Chennai (Fig. (9)) and the outputs are recorded. The linear displacement transducer with 1.5 mm linear stroke length placed on top of the winding (on Disc 1 of W1) is used to measure the displacement. 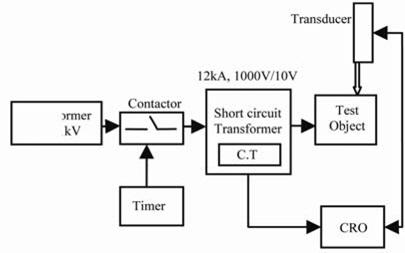 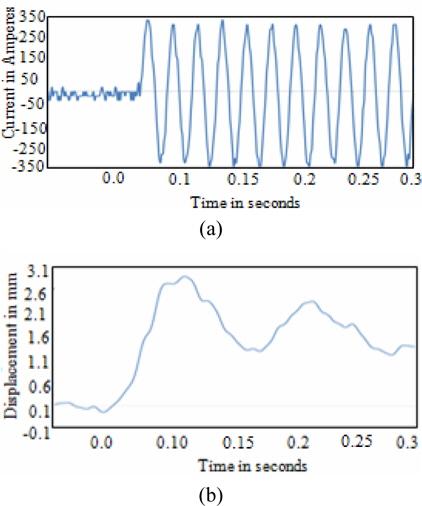 Fig. 10.(a) Excitation current (measured); (b) Displacement of top disc of W1 (measured)

The dynamic movement of the winding Fig. 10(b) is compared with the simulated response Fig. 8 and observed that the disc movement pattern is similar and the percentage error in the maximum displacement is 4% for the same current density. As the simulation methodology is validated using experimental results, further analyses are carried out for different currents using simulation methodology. Fig. 11 shows the displacement profile for different current densities. 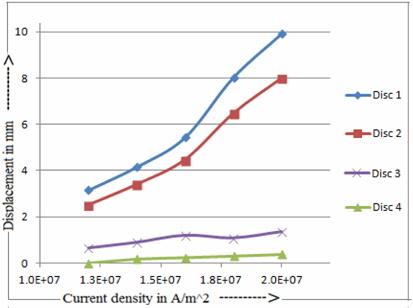 4. Change in Winding Parameters and Resonance Frequencies due to Winding Deformation

For axial deformation of transformer winding, both the inter turn capacitance and the self inductance do not vary with different short circuit currents. In the basic equivalent circuit, the inter-turn and inter-disc capacitances are represented as single capacitance (Cs) as given in [13]. Due to axial deformation, there will be a change in inter disc capacitance which necessitates the separation of the series winding capacitances (Cs) into inter turn (Ct) and inter-disc capacitance (Cd) and Cd is placed across the two consecutive discs. The change in the mutual inductance can be incorporated through coupling factor (k). Fig. 13 shows the proposed ‘modified electrical equivalent circuit’ with separated Ct and Cd. 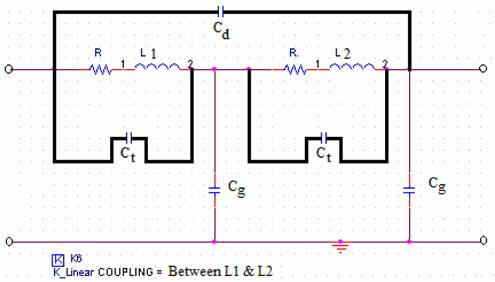 In the subsequent section, the change in equivalent circuit parameters of the winding due to displacement is calculated using Finite Element Method (FEM).

4.2 Determination of winding parameters due to different displacement 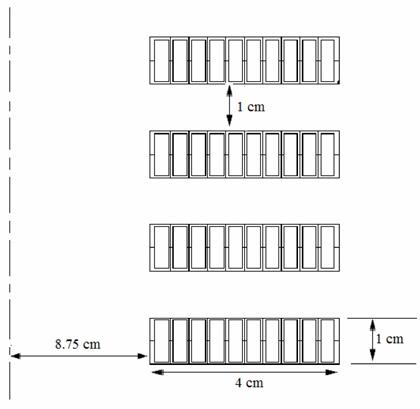 As both the inter turn capacitance and the self inductance do not vary with short circuit currents and the same are computed as 10.58pF and 32.27μH using FEM using electrostatic and magnetostatic solver respectively. Changes in inter-disc capacitance and magnetic coupling coefficient (for mutual inductance) for different distances between the discs are computed and given in Table 1. Stray / Shunt capacitance (Cg) is also calculated using Electrostatic solver. 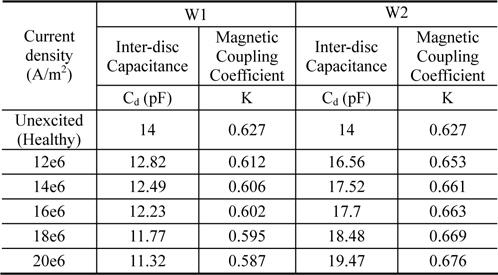 4.3 Resonance frequencies due to winding deformation

The simulated results are checked with measurements done using sweep frequency response analyser ( FRAX 101 of Megger make) and shown in Fig. 16(a) and 16(b). The maximum difference in first resonance frequency between the measured and the simulated is less than 4%.

The percentage shift in fr1 (with reference to unexcited case) for both the windings is calculated (Fig. 17) from which the displacement profile can be predicted for any short circuit current from Fig. 11. 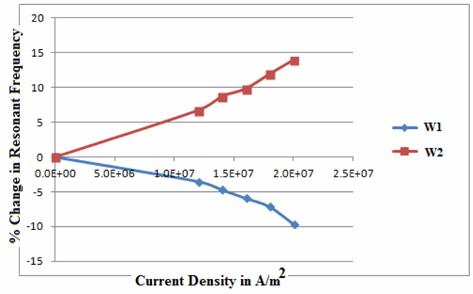 From the change in first resonant frequency for different currents, the axial displacement and the corresponding change in equivalent circuit parameters of each and every disc can be predicted. The above analysis can also be used to predict the withstand capability of transformer by calculating the winding impedance of the deformed winding due to short circuit at the design stage itself as per IEC Standard 60076-5 [10].

The Finite Element Method is used to compute the electromagnetic force and displacement profiles acting on the transformer winding. In the present work, the transient deformation profile of the winding due to short circuit current is simulated and compared with the measured value. Changes in equivalent circuit parameters (inter disc capacitance and mutual inductance) due to displacements are calculated. The transformer equivalent circuit is modified to incorporate the axial displacement of each disc and the resonant frequencies for different short circuit currents are computed. Thus computed results are checked with measured resonant frequencies using sweep frequency response analyser. From the change in the first resonant frequency due to short circuit current, it is easy to quantify the winding movements. Though the methodology is applicable for transformers with both radial and axial displacements of continuous disc windings, the same need to be checked for other types of winding.