Extraction of quaternary ammonium compounds (choline and betaine) from plant samples (spinach) using ion exchange resin (AG1, OH− form) is a very simple and inexpensive approach. However, it is very hard to determine amounts of choline and betaine simultaneously using high-performance liquid chromatography-ultraviolet (HPLC-UV) detection. Unlike choline, betaine has low molar absorptivity in UV-visible (UV-Vis) region, which makes it difficult to carry out UV-Vis detection of betaine. The mixture of quaternary ammonium compounds (choline and betaine) was derivatized using 2-bromo acetophenone as a derivatizing agent. As a result, choline did not react with the derivatizing agent, whereas betaine formed a betaine derivative. This betaine derivative exhibited detectable UV absorption with baseline separation between choline and the betaine derivative. Thus, with this method, choline and betaine can be determined simultaneously by using the HPLCUV method through one-step derivatization, which is an easy, sensitive, and reliable method.

Many plant species accumulate the osmo-protectant glycine betaine in response to salt or drought stress.1-2 Choline is a major constituent of the lipid fraction in biological membranes and free choline is frequently present in plants and animals.3 Betaine is a major choline metabolite in liver and kidney, and may be important product of choline metabolism in other tissues.4 Glycine betaine and its precursor choline have been found to confer a high level of osmotic tolerance when added exogenously to cultures of Escherichia coli at an inhibitory osmotic strength.5 Glycine betaine is a dipolar ion possessing a quaternary ammonium group and a carboxylic acid group.6 The quaternary ammonium compounds, choline and betaine, have a variety of effects and are closely connected metabolically.7-8

Various methods have been reported for the measurement of plasma free choline, including radioenzymatic assays,9-10 gas chromatography,11-12 HPLC with electrochemical detection13,14 and HPLC-mass spectrometry (MS).15 Also many methods are applied for the assay of betaine in the literature.16-18 Extraction of quaternary ammonium compounds (choline and betaine) from plant sample (spinach) using ion exchange resin (AG1, OH− form) is very simple and inexpensive method. While the sensitive methods for assaying choline are available, assay of betaine has been known as difficulty.

Dawson et al.19 has reported about the Dragendorff reagent, which was used for detection lacked sensitivity, with the colorimetric reaction being only semiquantitative. Various techniques are also available for this purpose, viz. pyrolysis gas chromatography,20 HPLC,21-23 spectrometric methods24-26 etc. However the techniques are expensive and require sophisticated analytical methods. Sometimes, the sample preparation methods are quite complicated. Mar et al.27 reported a single HPLC column and solvent system for the separation of betaine from other choline metabolites using 4-bromophenacyl triflate as a derivatizing agent. That derivatization was prepared from 4-bromo-2 diazoacetophenon which generates diazomethane during the reaction. Due to its high toxic and explosive nature, they had to take proper safety precautions.

Here, we present a method which is a comparatively very simple and no need to take such kind of safety precautions. The mixture of choline and betaine was derivatized using 2-bromo acetophenone as a deriva- tizing agent. In this way, only betaine forms derivative through one-step derivatization, and thus choline and betaine can be determined simultaneously by using HPLC-UV method which is easy, sensitive and reliable.

The standard choline chloride and glycine betaine were used as reagent grade. 2-bromo acetophenone was used as a derivatizing reagent. All chemicals were purchased from Aldrich (Milwaukee, USA). Deionized water was prepared by passing in house distilled water through a Human power water system (Human Corporation, Korea). All reagents and solvents were of analytical grade and were used without further purification.

Fig. 1.The derivatization of betaine.

In the process of extraction of osmo-protectants, the spinach samples were freeze-dried, kept in a desiccator, and finally ground just before extraction of choline and betaine from the plant sample.29 Then, the samples (200 mg) were mixed with 5 mL of a mixture of ethanol/water (9:1, v/v). The AG1 resin (200-400 mesh, OH− form, Bio-Rad) was used in a small column (4.0 mL) and dried down by centrifugation before being loaded with 250 μL of crude extract. The column was then washed with 750 μL of distilled water. The whole effluent was collected by another centrifugation.

A silica column was used for separation. Mobile phase was prepared by methanol : water (4:1, v/v). It was filtered using a 0.45 μm filter and degassed for several minutes prior to use. The separation was performed at a mobile phase flow-rate of 0.8 mL min−1. The column temperature was ambient. The injection volume for samples with internal standard (2,4-dichlorophenol) was 25 μL.

The maximum UV absorbance of choline and betaine were occurred at the same wavelength of 200 nm. Betaine, unlike choline, has low molar-absorptivity and it makes difficulty to detect betaine with UV detection. Thus choline and betaine were derivatized with using 2-bromo acetophenone as a derivatizing agent. From those, choline does not react with the derivatizing agent. However betaine forms betaine-derivative which shows the maximum UV absorbance at 254 nm with high molar absorptivity. 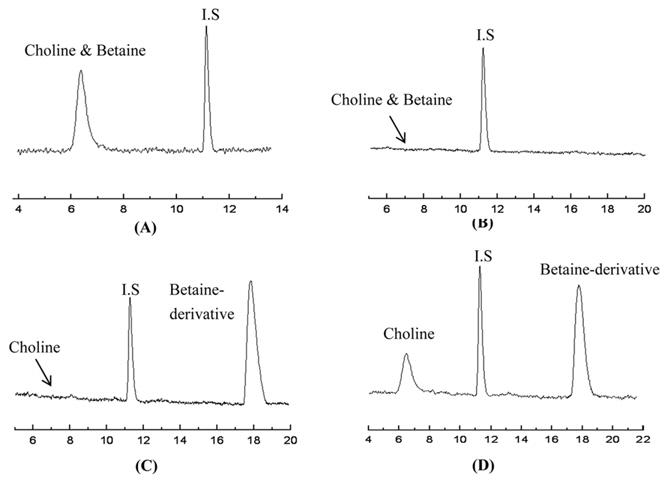 Based on the optimized conditions of sample preparation, we obtained relative recovery data (80.5-93.4%) from the different concentrations (20.0 mg L−1 for choline and 10.0 mg L−1 for betaine). Reproducibility was obtained as 1.5~6.0% RSD, which was affected by the applied concentration. 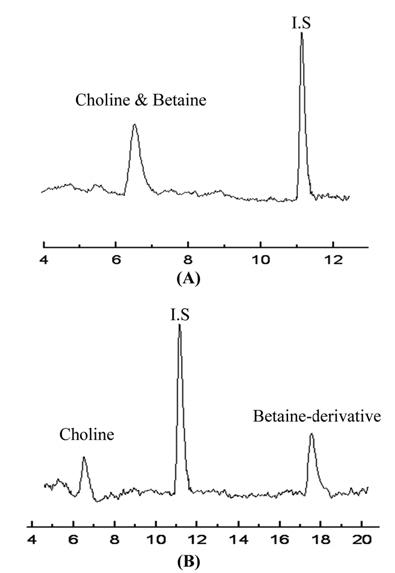 Fig. 4.Chromatograms of betaine and choline in the extract from real plant sample at 230 nm (A) without derivatization and (B) with derivatization.

The main topic of this note is to develop a novel sensitive method for the simultaneous determination of choline and betaine with HPLC-UV after one-step derivatization, which is relatively easy and comparatively cheap.