Genetically modified (GM) papaya line 55-1, which is resistant to PRSV infection, has been marketed globally. Prompt and sensitive protocols for specific detections are essential for the traceability of this line. Here, an event- and construct-specific real-time polymerase chain reaction (RT-PCR) method was established to detect 55-1. Qualitative detection was possible for fresh papaya fruit up to dilutions of 0.005% and 0.01% for the homozygous SunUp and heterozygous Rainbow cultivars, respectively, in non-GM papaya. The method was applied in the qualitative detection of 55-1 in eight types of commercially processed papaya products. Additionally, papaya products were monitored to distinguish GM papaya using the P35S and T-nos RT-PCR detection methods. As expected, detection capacity was improved via modified sample preparation and the established RT-PCR detection method. Taking these results together, it can be suggested that a suitable method for the extraction and purification of DNA from processed papaya products was established for the detection of GM papaya.

The global area of genetically modified (GM) crops continuously increased since 1996, reaching 170 million hectares by the end of 2012.1 Since consumers are concerned for the safety of GM food and feed, GM labeling on food products containing GM material is mandatory in more than 50 countries.2 Prompt and sensitive protocols for specific detections are essential in order to implement GM labeling regulations.

Papaya (Carica papaya Linnaeus), one of the most important economic fruit crops, has been widely cultivated in tropical and subtropical lowland regions for its nutritional benefits and medical applications. The Papaya Ringspot Virus (PRSV) is critical cautions to reduce papaya yield.3 GM papaya line 55-1 (55-1) resistant to PRSV infection was first developed by Cornell University, the University of Hawaii and the Upjohn Company in 1998 and cultivated for food in the United States for more than a decade.4 The Canadian government approved the import of 55-1 line in 2003, and the Food Safety Commission of Japan approved its import in 2010. Line 55-1 is a fruit that is commercially available worldwide in various types of food products: fresh papaya fruit, canned papaya, pickled papaya, dried fruit, papaya-leaf tea, jam, puree, juice and dietary supplement. Until now, GM papaya has not been approved in Korea, which the cultivation and the use of GM papaya as food has been limited. Nonetheless, unauthorized GM papaya has caught on in the worldwide market. The Ministry of Food and Drug Safety (MFDS, Chungbuk, Korea) inspects and monitors all imports and products to restrict the import and sale of products containing GM papaya in Korea.

Previously, MFDS has used qualitative polymerase chain reaction (PCR) methods to monitor GM papaya by detecting 55-1 gene. These detection methods were not suitable to detect the endogenous gene, papain, and 55-1 gene because detection sensitivity was not achieved in the case of the processed papaya products. In addition, the modified methods for the extraction and purification of DNA from processed papaya products are needed because other ingredients in the processed products has easily interfered the PCR reaction by fragmentation of DNA and denaturation of enzyme.5 Therefore, a method to extract and purify DNA from processed papaya products, such as dried papaya, canned papaya, and puree was tested and optimized.

In this study, we established the real-time PCR method for detecting the endogenous gene, chymopapain (Chy), and 55-1 gene and optimized the sample preparation enough to judge for GM labeling of a variety of papaya products.

Hawaiian non-GM (Sunset) and two cultivars of 55-1 (SunUp and Rainbow) were purchased from the Hawaii Papaya Industry Association with a permission of Animal and Plant Quarantine Agency. SunUp is generated as a homozygote by transforming the non-transgenic inbred cultivar, Sunset, whereas Rainbow is a first filial generation (F1) hybrid by crossing between SunUp and non-transgenic Kapoho.6-7 Fourteen commodities from eight types of processed papaya products (i.e., canned papaya, fruits cocktail, dried fruit, papaya-leaf tea, puree, drink base, dietary supplement and beverage) were secured examining samples and purchased online (Table 1).

Total cellular DNA was extracted from the prepared samples by the DNeasy® Plant Mini Kit (Qiagen, Hilden, Germany) according to a modified manufacturer’s procedure. In brief, 200 mg of the ground samples were lysed by 400 μL of AP1 buffer and 4 μL of RNase A (100 mg/mL) followed by incubation at 65 ℃ for 30 minutes. 7 μL of cellulase (20 mg/mL; Sigma, MO, USA) and 4 μL of α-amylase (20 mg/mL; Junsei, Japan) were added and further incubated at 50 ℃ for 1 hour. Then, 7 μL of proteinase K (20 mg/mL; Promega, WI, USA) was added, and the mixtures were incubated at 50 ℃ for another 1 hour. For precipitation of DNA, 130 μL of AP2 buffer was added and kept on ice for 5 minutes. After centrifugation at 20,000 × g for 5 minutes at room temperature, supernatants were transferred to a QIAshredder spin column. Next, 1.5 volumes of AP3/E buffer were added to the flow-through and mixed by pipetting. The mixtures were transferred into DNeasy Mini spin columns and centrifuged at 20,000 × g for 1 minute at room temperature. The DNeasy Mini spin columns were washed with 500 μL of AW buffer and transferred to the fresh tube. 100 μL of deionized water was added to the spin column and incubated for 5 minutes at room temperature. The extracted DNA was collected by centrifugation 20,000 × g for 1 minute.

To amplify the endogenous gene (Papain), the polymerase chain reaction (PCR) was performed using Takara TaqTM PCR reagents (Takara, Shiga, Japan). Each concentration of the reagents for PCR was as follows: 1.5 mM MgCl2; 0.2 mM dNTPs; 1.5 mM primer papain SS11F and SS11R; 0.625 U Taq DNA polymerase. PCR was performed using 50 ng DNA extracted from processed papaya products in PCR thermal cycler (GeneAmp® PCR System 9700, Applied Biosystems) under the following conditions: an initial denaturation step at 94 ℃ for 5 minutes followed by 40 cycles at 94 ℃ for 30 seconds, 55 ℃ for 30 seconds, and 72 ℃ for 30 seconds, finishing with final extension step at 72 ℃ for 7 minutes. The amplified PCR products were analyzed by an automatic microchip electrophoresis system, MultiNa (Shimadzu, Kyoto, Japan) with DNA-1000 reagent kit (Shimadzu, Kyoto, Japan) according to the manufacturer’s recommendations.

2.4. Assay and analysis of real-time PCR 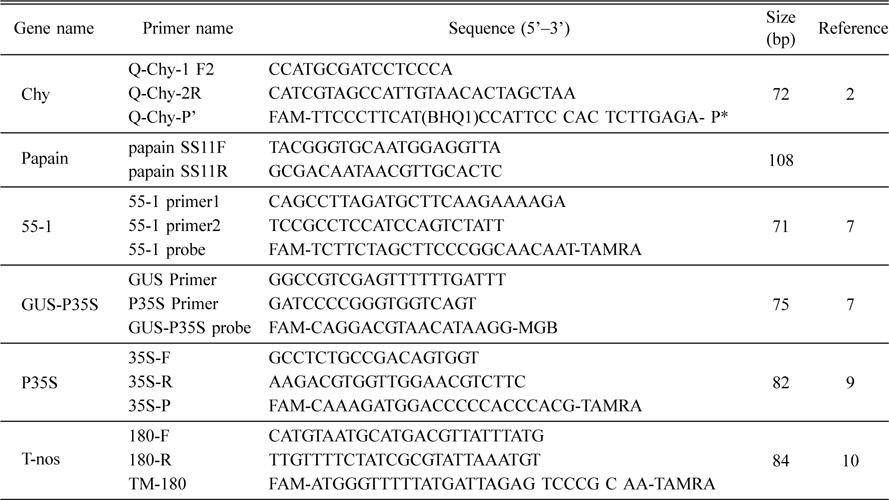 3.1. Endogenous gene, papain, was not detected in the processed products by conventional PCR

Previously we tried to detect the endogenous gene, papain, in the fourteen samples from eight types of processed papaya products (Table 1), i.e. canned papaya, fruits cocktail, dried fruit, papaya tea, puree, drink base, dietary supplement, and beverage, by conventional PCR method. However, it was hardly detected because the processed products were composed of the several ingredients, such as protein and sugar, which could hamper the enzymatic reaction of polymerase. To decrease the interfering components and increase the DNA purity, the additional enzymes were needed. For instance, α-amylase hydrolyzes the a-bonds of α-linked polysaccharides, such as starch and glycogen, yielding the various lengths of oligosaccharides. Cellulase is an enzyme which hydrolyzes β1,4-glucoside-linked cellulose chains to degrade the cell walls of plants. Protenase K is widely used to remove contaminants by hydrolyzing the protein.11

To evaluate the effect of the modified sample preparation with the additional enzymes, we checked the yield and purity of DNA by measuring the optical density in the wavelength of 230 nm, 260 nm and 280 nm (A230, A260 and A280). The efficiency of DNA purification was slightly improved in the modified sample preparation, yielding to around 1000 ng DNA from 1 g of starting material with the absorbance ratios of A260/A280 and A260/A230 determined as 1.6. The endogenous gene, papain, was not determined when conventional PCR was performed using the extracted DNA from the processed papaya products (Fig. 1) even though purity of the extracted DNA was improved by modification of sample preparation. It was supposed that the conventional PCR was not suitable for detecting the endogenous gene because the detection sensitivity were not enough to detect the small amounts of papaya genes in the processed papaya products.

3.2. Establishment of the real-time PCR for detecting Chy and 55-1 from the fresh papaya

To enhance the sensitivity of detection, we tried to set up the real-time PCR for detecting the endogenous gene (Chy) and construct-specific gene (55-1). First, we prepared the purified DNA from the fresh papaya fruit to secure the standard samples for establishment of real-time PCR method. SunUp and Rainbow were used as GM cultivar, whereas Sunset was used as non-GM cultivar. As shown in Fig. 2, papaya endogenous Chy-specific real-time PCR using 25 ng template DNA gave an amplification signal at Ct values (threshold value, 0.05) of 22.34, 21.48, and 20.74 for SunUp, Rainbow, and Sunset, respectively. Event, construct and Cis-element (P35S and T-nos)-specific real-time PCR using 25 ng DNA purified from fresh GM papaya fruit gave an exponential amplification signal at Ct values (threshold value, 0.05) of 23.50, 22.93, 22.51 and 23.13 (Rainbow; Fig. 2B), and 22.05, 21.57, 21.02 and 23.04 (SunUp; Fig. 2C), respectively. No false-positive signal was detected using Sunset template DNA in the Event, construct and Cis-element (P35S and T-nos)-specific detection method (Fig. 2A), suggesting that real-time PCR was fulfilled to distinguish the GM and non-GM papayas.

Fig. 2.Amplification curves of real-time PCR. DNA templates from Sunset (A), Rainbow (B), and SunUp (C) were used for real-time PCR with a primer and probe set for detecting an endogenous Chy, Event, construct and Cis-element(P35S and T-nos) specific genes. 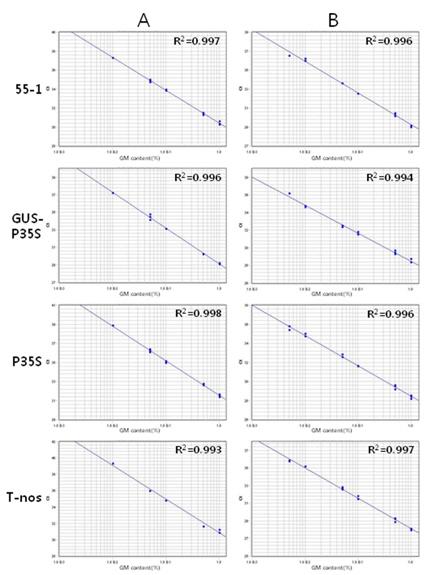 The established real-time PCR method was conducted for detecting the endogenous gene, Chy, from the processed papaya products (Table 1). As expected, Chy gene was detected in the seven products, i.e. canned papaya, fruits cocktail and dried papaya, which were not detected by conventional PCR (Table 3). Interestingly, four papaya products, i.e. dried papaya, puree and tee, were additionally detected after an additional washing and enzyme pre-digestion (Table 3). This is because the processed products were mixed with the bleaching agents, i.e., sulfites and glycerin, which can degrade DNA to fragment smaller than the amplicon size of Chy (72 bp). Also, Ct values of Chy genes from the modified sample preparation were relatively lower than samples extracted by the manufacturer’s protocol. However, Chy gene from drink base, dietary supplement and beverage could not be detected by real-time PCR, for reason of low papaya content even though the detection sensitivity was enhanced (Table 3).

To evaluate the GM products, we tried to detect the event-specific 55-1 gene, p35s and T-nos. P35S and T-nos were determined as screening GM products since P35S and T-nos are the most common promoter and terminator, respectively, used in the transformation of papaya for various GM papaya traits.12 As shown in Table 3, GM papaya, which has P35S promoter and T-nos terminator, was not found in all of the processed products. Furthermore, all of the processed products were negative for 55-1 using event-specific 55-1 detection methods (Table 3).

To conclude, it could be suggested that a reliable construct- and event-specific real-time PCR for detecting GM papaya genes was established in the processed papaya products. Although the quality of purified DNA was not consistent among the processed products, the newly established method was found to be useful for detecting endogenous gene, chy, and 55-1 gene in eight types of processed products which contained papaya as a main ingredient. Moreover, a modified sample preparation was suggested as an important step for fulfilling the real-time PCR method. We could expect that the improved detection method might expand to monitor the various processed papaya products.