CSF is a major concern for the swine industry, representing currently the most epizootically dangerous disease to the species. Numerous CSFV isolates with various degrees of virulence have already been isolated worldwide, ranging from low virulent strains that do not result in any apparent clinical signs to highly virulent strains that cause a severe per acute hemorrhagic fever with very high mortality. The molecular epidemiology of CSFVs has proven to be an essential tool for effective disease control and the development of safe and effective vaccines. Therefore, this study cloned and sequenced local CSFV isolates, and conducted a phylogenetic analysis based on the E2 glycoprotein encoding sequences.The RNA was extracted from PK15 cell culture passaged CSFV isolates, the cDNA prepared, and the complete E2 gene amplified with a product size of 1186 bp. The gelpurified PCR product was cloned into a pGEMT easy vector and the positive clone commercially sequenced. Aligning the nucleotide (1119 bp) and amino acid (373) sequences with 29 reference strains revealed nucleotide and amino acid sequence identities of 82.60-97.80% and 88.70-98.70%, respectively, indicating a higher mutation rate of the field CSFV strains. The phylogenetic analysis based on the complete E2 amino acid sequences also revealed a reliable differentiation of all the analyzed strains into specific genetic groups and subgroups, plus the local isolate (CSFV-E2) was found to cluster with the CSFV subgroup 2.2. Thus, the full-length E2 cds proved to be most suitable for a reliable and statistically significant phylogenetic analysis of CSFV isolates.

Classical Swine Fever (CSF), also known as hog cholera, is one of the most dreaded and devastating viral diseases of swine causing serious economic losses due to mortality, retardation of growth, and reproductive problems, along with restrictions on the export of pork and pork products. The causative agent of this disease, Classical Swine Fever Virus (CSFV), is a small enveloped virus belonging to the genus Pestivirus family Flaviviridae [13] and is closely related antigenically and structurally to bovine viral diarrhea virus (BVDV) and border disease virus (BDV) [1]. CSFV is highly contagious and infects domestic pigs as well as wild boar. Infection is transmitted either by direct or indirect contact between infected pigs, by contaminated food or swill feeding, and also by transmission via contaminated objects and/or persons. Molecular virus tracing helps to understand the sources and pathways of infection, making it an important tool for disease control [7].

CSFV can be divided into three genotypes (1, 2, and 3), where each is comprised of three or four subgenotypes (1.1-1.3; 2.1-2.3; 3.1-3.4) [5]. To assign a newly identified CSFV isolate to a genotype and to describe its phylogenetic relations to other known isolates, nucleotide sequencing is mandatory, as while other techniques like a restriction enzyme analysis can allow segregation on a genotype level, the resolution on a subgenotype level is often insufficient [6].

Currently, genetic characterization/typing of an individual CSFV isolate is performed based on a short fragment (150 nucleotides) of the 5' non translated region (NTR), 190 nt E2 and 409 nt length NS5B coding regions. However, the short sequence lengths of these fragments often hamper the ability to distinguish closely related isolates during an out break situation and result in phylogenetic analyses showing only low statistical significance, as reflected by bootstrap values below 70% [9]. These limitations are the reason for an ongoing debate on how to best improve the strategy for molecular characterization, phylogenetic analysis, and the classification of CSFV isolates into defined subgenotypes [4].

Recently, Postel et al. [10] proved that full-length E2 encoding sequences (1119 nt) were the most suitable for reliable and statistically significant phylogeny, and analyses revealed results as good as those obtained with much longer entire 5' NTR-E2 sequences. As such, this strategy is recommended by the EU and OIE Reference Laboratory for CSF as it provides a solid and improved basis for CSFV molecular epidemiology. Therefore, this study attempted the cloning, sequencing and phylogenetic analysis of a local CSFV isolate based on full-length E2 encoding sequences.

The PK15 cell culture passaged local CSFV isolate used in this study was available in the School of Animal Biotechnology, GADVSU, Ludhiana.

The PCR amplified blunt end E2 product was purified using a Min Elute Gel Extraction kit (Qiagen), A-tailed with the help of dATP and Taq DNA polymerase at 72°C for 1 h, ligated into a pGEM®-T Easy TA cloning vector, and then transformed into TOP10 E. coli competent cells. Ampicillinresistant positive clones from agar plates were screened for the presence of the desired E2 gene insert using a colony PCR with pUC/M13 forward and reverse primers. The recombinant plasmid prepared from the PCR-confirmed E2 clone was sent for commercial sequencing to Invitrogen Bioservices Pvt. Ltd., Gurgaon.

The full-length CSFV E2 encoding sequences were successfully amplified using an RT-PCR with a product size of 1186 bp (Fig. 1). The amplified E2 product was then gel purified, A-tailed, ligated into a pGEMT Easy TA cloning vector, and transformed into chemically competent E. coli (TOP10) cells. A PCR using the recombinant plasmids prepared from the positive clones successfully amplified a 1440 bp (Fig. 2) product when using pUC/M13 F and pUC/M13 reverse primers, thereby confirming the presence of the desired insert. Thereafter, the recombinant plasmid carrying the CSFV E2 insert was sequenced based on commercial outsourcing. 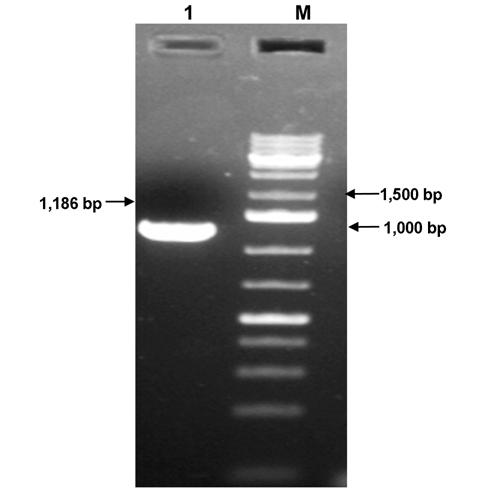 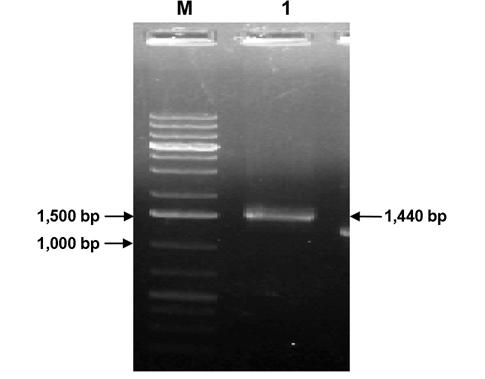 The nucleotide and amino acid sequence alignments of the CSFV E2 glycoprotein gene were carried out using the Clustal W method from the MegAlign Program of Lasergene software. The comparisons of the complete E2 glycoprotein coding nucleotide sequences (1119 bp) of one local CSFV isolate (CSFV-E2) and six GenBank-available Indian CSFV isolates [CSFV-India-1.1-(EU857642), CSFV-Assam-(EU567076), CSFV_IND-UK-LAL-290-(KC851953), CSFV-UP-BD-SKN-11-India-(KC533776), CSFV-UP-BR-KHG-06-India-(KC533775), CSFV-UP-GZ-NVD-11-India (JQ861548)] revealed that the nucleotide homology of the local isolate with that of the six Indian isolates varied between 82.90-97.80%, whereas the nucleotide homology of the local isolate with that of the 23 reference strains varied between 82.60-93.30% (Fig. 3). The local CSFV E2 sequences had the highest homology of 97.80% with the CSFV-UP-BD-SKN-11 (KC533776) genotype 2 strain from India, while the lowest homology of 82.60% was with the RUCSFPLUM (AY578688) genotype 1.2 strain from the U.S.A. The nucleotide sequence variation in the CSFV E2 cds of the local isolates was due to point mutations at various places throughout the gene length (Fig. 3). One reason for these CSFV mutations may have been widespread vaccinations against CSFV, resulting in antibody pressure on the virus by the host.

Fig. 3.Pair wise comparison of the nucleotide sequence identify (%) in the coding sequences of the CSFV isolates.

Fig. 4.(B) Pair wise comparison of the amino acid sequence identify (%) based on the coding sequences of the CSFV isolates.

The E2 gene nucleotide sequence identity (82.60-97.80%) of the local isolate was found to be lower than the E2 protein amino acid sequence identity (88.70-98.70%), which further confirmed the higher mutation rate of the CSFV field strains. Several other studies have also reported a high point mutation rate and higher polymorphism in E2 protein coding sequences, which is correlated with the virulence of the CSFVs.

A phylogenetic tree was constructed based on the E2 protein amino acid sequences of the local isolate and 29 GenBank-available Indian (six) and foreign (23) isolates using the Maximum Likelihood method of MEGA 6.06 software including bootstrap values for 1000 repetitions (Fig. 5A). The tree was rooted at the distinct CSFV strain Great Britain/1964 “Congenital Tremor” (GenBank: JQ411575). 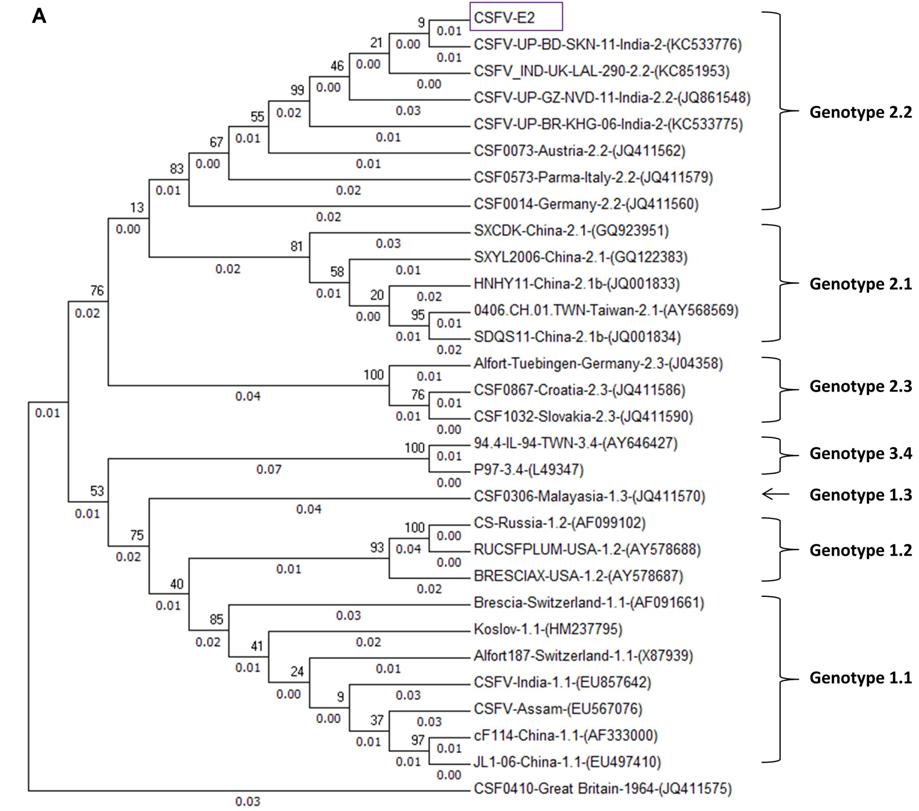 Fig. 5.(A) Phylogenetic trees based on the full-length E2 encoding amino acid sequences (Original Tree). Phylogenetic tree of one local and 29 reference isolates from the GenBank database (isolate, country, genotype, GenBank accession number) were calculated by the Maximum Likelihood method including bootstrap values for 1000 repetitions. Tree was rooted at the distinct CSFV strain Great Britain/1964 “Congenital Tremor” (GenBank: JQ411575). Genotypes and subgenotype names are indicated besides the tree. Branch lengths are given as 0.01 substitutions per position according to the scale bars underneath each tree. 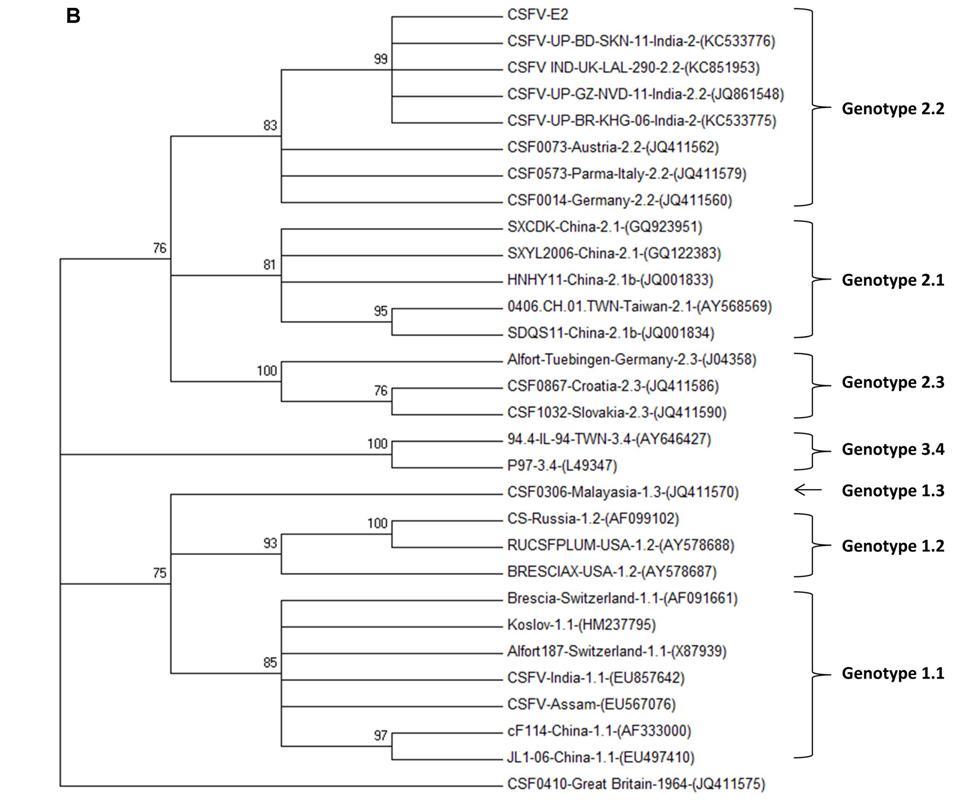 Fig. 5.(B) Phylogenetic trees based on the full-length E2 encoding amino acid sequences (Only statistically significant bootstrap values ≥70.0% were indicated). Phylogenetic tree of one local and 29 reference isolates from the GenBank database (isolate, country, genotype, GenBank accession number) was calculated by the Maximum Likelihood method including bootstrap values for 1000 repetitions. Only statistically significant bootstrap values (≥70.0%) are indicated. Tree was rooted at the distinct CSFV strain Great Britain/1964 “Congenital Tremor” (GenBank: JQ411575). Genotypes and subgenotype names are indicated besides the tree.

Thus, when taken together, the results of the present study showed that the phylogenetic analysis of the fulllength E2 encoding sequences allowed differentiation of even closely related isolates, and this segregation was also supported by adequate confidence levels.

Classical swine fever is a devastating animal disease causing serious economic losses. CSFVs can be divided into three genotypes, 1, 2, and 3 each comprising three or four subgenotypes (1.1-1.3, 2.1-2.3, and 3.1-3.4). It is well known that the Group 1 viruses consist of highly virulent strains that can cause acute CSF, while the Group 2 viruses are characterized by moderately virulent strains that cause sub-acute and chronic CSF. In this study, the nucleotide and amino acid sequence alignments of the E2 glycoprotein were carried out using the Clustal W method from the MegAlign program. The nucleotide (1119 bp) and amino acid sequence (373 a.a) alignments of the E2 gene from the local CSFV isolates with the E2 gene from 29 reference strains revealed nucleotide sequence identities between 82.90 and 97.80% and amino acid sequence identities between 88.70 and 98.70%, indicating a higher mutation rate of the field CSFV strains.

In addition, a phylogenetic tree was constructed based on the E2 protein amino acid sequences of one local isolate and29 GenBank-available isolates (6 Indian and 23 foreign isolates) using the Maximum Likelihood method from MEGA 6.06 software. The phylogenetic analysis based on complete E2 amino acid sequences revealed a reliable differentiation of all the analyzed strains into specific groups and subgroups, where the local isolate (CSFV-E2) was clustered with the CSFV genotype 2.2 group. When Singh et al. [12] used a sequence analysis of partial coding sequences of non-translated regions from virulent (CSFV/LAP) and lapinized vaccine (CSFV/LAP) strains of CSFV, the strains were all placed in genogroup 1.1. Meantime, Desai et al. [3] used a sequence analysis of the 5' UTR, where 3 out of 9 isolates were identified as genotype 2.1 and closely related to European CSFV strains, while the remaining 6 isolates were identified as genotype 1 with a prevalence of both genotype 1 and 2.1 in the North-Eastern part of India. When Sharma et al. [11] typed 16 CSFV isolates from different districts of Assam based on 150 nucleotide fragments of the 5' NTR and 190 and 409 nucleotide fragments of the E2 and NS5B genes, respectively, all the isolates were identified as belonging to subgroup 1.1. Likewise, when Patil et al. [8] used a genetic analysis of the NS5B region of 23 CSFV isolates from different parts of India, the identification was dominated by subgroup 1.1. Charkraborty et al. [2] also characterized three CSFVs isolated from suburban locations in Bangalore using molecular techniques targeting the 5' NTR gene and grouped these viruses into subgroup 2.2 of group 2. Reports from Taiwan, Columbia, and Germany also suggest the predominant involvement of group 2 and 3 viruses [2].

Providing a large collection of sequences from one or more specific target regions increases the likelihood of such regions being used in future studies. Different regions of the CSFV genome have already been proposed for phylogenetic analysis. In this study, the CSFV E2 sequence showed the highest amino acid sequence homology (98.70%) with the CSFV_IND-UK-LAL-290 (KC851953) genotype 2.2, and the local CSFV E2 nucleotide sequences showed the highest homology of 97.80% with the CSFV-UP-BD-SKN-11 (KC533776) genotype 2. Thus, such phylogenetic studies can be a useful approach to study the molecular epidemiology of CSFV.