Phosphodiesterase type 5 inhibitors (PDE-5 inhibitors) are used in the treatment of erectile dysfunction. In recent years, a number of reports have been conducted on dietary supplements contaminated with PDE-5 analogues. In this study, 58 analogues of PDE-5 inhibitors were sorted into five groups: tadalafil, sildenafil, hongdenafil, vardenafil, and other analogues. These analogues were then evaluated using a liquid chromatography-quadrupole-time of flight mass spectrometry (LC-QTOF-MS) electrospray ionization mass method. Each compound has a unique fragmentation ion, which can be easily analyzed qualitatively. The fragmentation pathways of the analogues were elucidated based on the QTOF-MS and MS/MS data. Common ions were confirmed for each group by analyzing the structural characteristics and fragmentation pathways. Specifically, common ions were observed at m/z 169.08 and 135.04 (tadalafil analogues), m/z 311.15 and 283.12 (sildenafil analogues and hongdenafil analogues), and m/z 312.16 and 151.09 (vardenafil analogues). The advantage of this method is that the structure of unknown components can be determined by interpreting the product ions. Hence, the developed method can be used for the identification of unknown compounds. Fragmentation pathways may also aid in the detection and identification of PDE-5 inhibitor analogues.

Phosphodiesterase type 5 (PDE-5) inhibitors, which are clinically indicated for the treatment of erectile dysfunction (ED), are widely available on the illegal market and as undeclared adulterants.1-5 Some products have been found to be adulterated with approved PDE-5 inhibitors as well as their unapproved synthetic analogues, which contain minor structural modifications compared to the approved compounds. The presence of PDE-5 inhibitors or their analogues in herbal supplements could pose a significant risk to the public health.6 PDE-5 inhibitors can cause several adverse effects such as headaches, facial flushing, nasal congestion, dyspepsia, visual disorders, and back pain.7-9 Furthermore, patients taking nitrate medications should not use PDE-5 inhibitors, as this combination may provoke potentially life-threatening hypotension.10 However, the widespread use and popularity of PDE-5 inhibitors have led to an increase in the prevalence of illicit sexual performance enhancement products in many countries.11-15 The presence of various analogues of PDE-5 inhibitors in dietary supplements has increased tenfold over the past decade, potentially posing a serious health risk to humans.

A number of analytical techniques have been developed for the detection and determination of PDE-5 inhibitors, such as immunoassays,16 atomic emission spectrometry,17 ion mobility spectrometry,18,19 micro-Raman spectroscopy,20 high-performance liquid chromatography (HPLC) with ultraviolet or fluorescence detection,21-23 gas chromatography–mass spectrometry (GC-MS),24,25 and liquid chromatography-mass spectrometry (LC-MS).26-31 Liquid chromatography-quadrupole-time of flight mass spectrometry (LC-QTOF-MS) carried out in full scan mode can be used to elucidate the accurate mass of target and nontarget compounds, as well as that of unknown compounds, while the multiple reaction monitoring (MRM) mode can be used only to detect the mass of target compounds. Fragmentation patterns can be used to determine the structure of unknown components by interpreting the product ions. Accurate mass information is important for confirming the identities of product ions and it plays a key role in the elucidation of fragments.

The possible fragmentation pathways were reviewed and selected in accordance with the following criteria: (1) the tendency for the radical site to initiate a reaction in competition with the charge site generally parallels the radical site’s tendency to donate electrons: N > S, O, π, R· > Cl, Br > H, where π signifies an unsaturated site and R· is an alkyl radical; (2) in n-alkanes, the most easily cleaved bonds (σ-bonds between secondary carbons) have nearly equivalent bond strength; and (3) a number of the most significant differences arise owing to the low ionization energies of sulfur compounds, which are approximately 1 eV below those of the corresponding oxygen compounds.32

Fifty-eight PDE-5 inhibitors and their analogues were analyzed by QTOF–MS; the analogues were classified into five groups: tadalafil, sildenafil, hongdenafil, vardenafil, and other analogues. The results are summarized in Table 1. The fragmentation pathways of the five types of PDE-5 inhibitors were studied using a combination of QTOF-MS. The protonated [M+H]+ molecule ions were selected as the precursor ions for the fragments in the MS/MS product ion spectra. To aid in the interpretation of the product ion spectra, accurate mass measurements of the product ions were conducted using LC-QTOF-MS. And the accurate mass measurement error for between the experimental and the theoretical mass of [M+H]+ ion was lee than 10 μg/kg. Identification of the compounds was based on retention time, protonated molecular ions, and fragment ions at individually selected collision energies (CEs). The CEs were set to 5, 10, 15, 20, 25, 30, 35, and 40 eV, and the optimal CE was determined for each PDE-5 inhibitor. 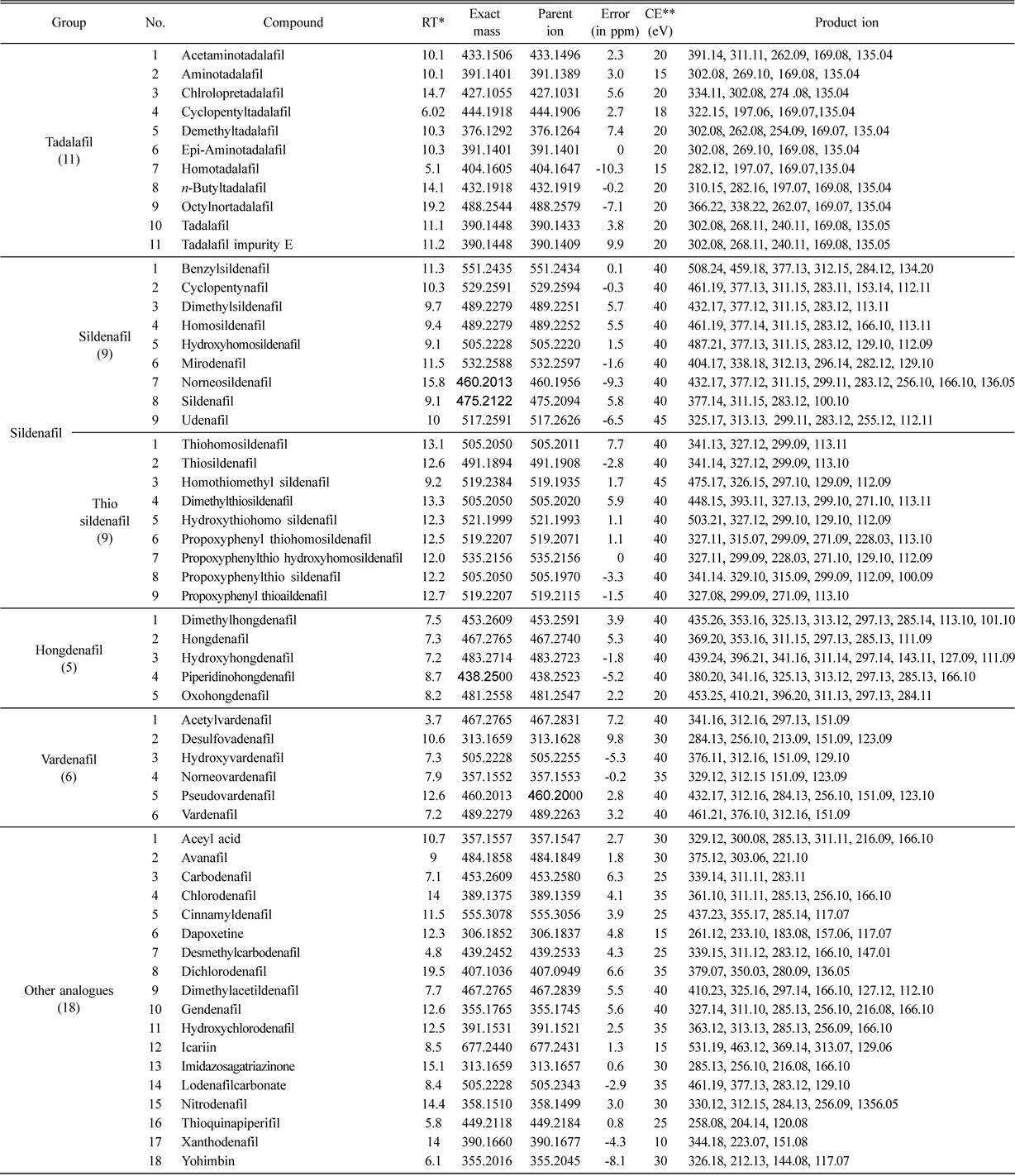 For the MS/MS studies, the mass spectrometric parameters were optimized in order to obtain the best mass fragmentations. Accurate mass values were observed for the product ions in MS/MS, and the element compositions were derived from the measured m/z values and the general concept that fragmentation should involve logical neutral losses. Additionally, the product ion data were used to construct the fragmentation pathways. 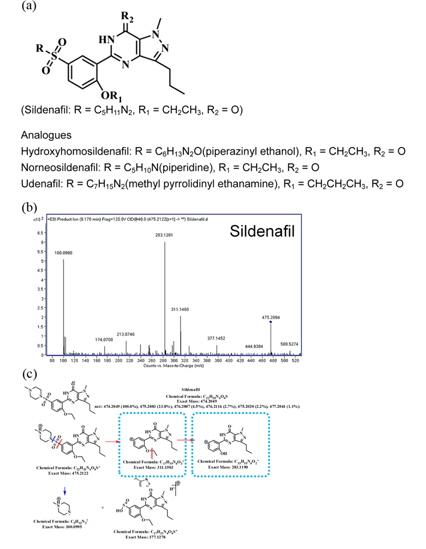 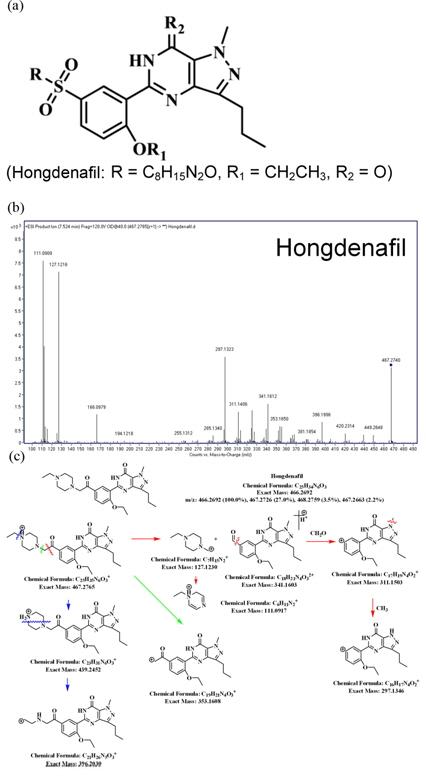 Vardenafil has six types of analogues; several examples are shown in Fig. 4. The piperazinyl ethanol-substituted analogue is called hydroxyvardenafil and the piperidine-substituted analogue is called pseudovardenafil. In the mass scan, vardenafil showed a peak at m/z 489.22 as [M+H]+, and fragment ions at m/z 376.12, 312.15, and 151.08 were observed. The peak at m/z 376.12 was attributed to the ethylpiperazine-detached structure from [M+H]+, while that at m/z 312.15 originated from the detachment of the ethylpiperazine and sulfonyl groups. The peaks at m/z 312.16 and 151.09 are common ion molecules, which were observed in all the six vardenafil analogues. The vardenafil analogues exhibited common ions at m/z 312.16 and 151.09 and showed similar patterns in their MS/MS spectra and fragmentation pathways.

3.4. Fragmentation of other analogues 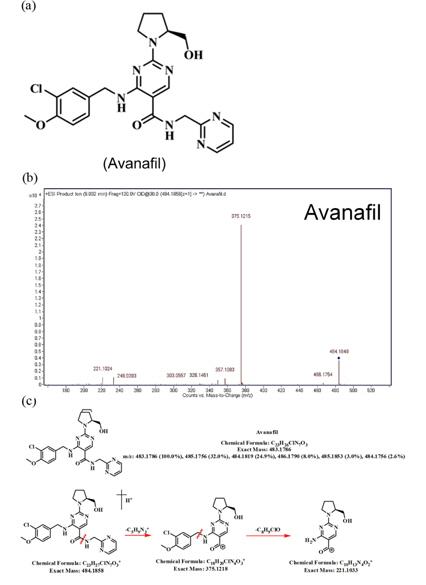 Fig. 5.(a) Chemical structure of avanafil, b) typical spectra of avanafil obtained by LC-QTOF-MS in positive electrospray mode, and (c) fragmentation pathway of [M+H]+ from avanafil in positive ion mode.

A difference of 14 Da was observed between the peak at m/z 390.14 from [M+H]+ of tadalafil and the peak at m/z 404.00 from [M+H]+ of an unknown compound; therefore, the loss of a CH2 group could be expected. The unknown compound was predicted to be a tadalafil analogue, as it exhibited similar characteristic ions as tadalafil at m/z 135.05, 169.08, and 197.07 in the MS/MS spectrum.33 Furthermore, in regard to the fragmentation pathway, a difference of 14 Da between the peak at m/z 268.10 of tadalafil and that at m/z 282.12 of the unknown compound indicates that the attached group on the R position was an ethyl group, not a methyl group. The daughter ions generated from the parent ions help predict the fragmentation pattern of the molecule and are useful for confirming the target analytes. Therefore, the fragmentation pathway of homotadalafil could be represented as shown in Fig. 6. 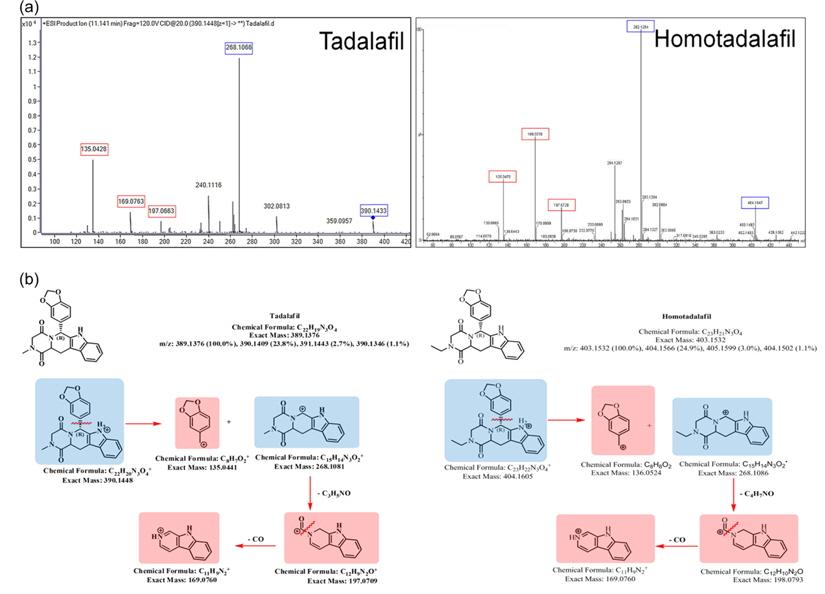 Structural analysis of 58 PDE-5 inhibitor analogues was performed using LC-QTOF-MS. The 58 analogues were sorted into five groups: tadalafil, sildenafil, hongdenafil, vardenafil, and other analogues. By analyzing the structural characteristics and fragmentation pathways of the compounds, the common ion molecules were confirmed for each group. The developed analytical method could be utilized in the investigation and identification of new PDE-5 inhibitor analogues and can be very useful in the detection of adulteration. The developed method is expected to serve as a novel and facile method for the expeditious identification of unknown compounds.