Development of a Time-Domain Simulation Tool for Offshore Wind Farms

As wind power plants become larger in size, the importance of fatigue loading as well as power production from wind turbines is increasing. Offshore wind power plants have gained worldwide attention because of the advantages in wind turbine capacity, farm size, and wind energy, compared to onshore wind turbines. However, the cost of energy (COE) of offshore wind farms is significantly higher than their onshore counterparts, thus many researches have been conducted to reduce the COE of offshore wind farms such as the optimal placement of wind turbines, monitoring and prediction of parts failure, and wind farm control and benefit in annual power production and load, operation, and maintenance [1]-[6]. Among these research topics, using wind farm control algorithm is advantageous because it can be implemented in existing wind farms without modifying the wind turbine and farm layout. However, before implementing the wind farm control algorithm to a wind farm, it is essential to verify the algorithm using various means such as simulations and experiments. A simulation tool that can simulate a wind turbine’s dynamic power output in a wake field of the wind farm in the time domain can be considered.

The objective of this study was to develop a simple and approximate time-domain simulation tool to simulate the dynamic power outputs of wind turbines in an offshore wind farm and be used to validate a wind farm control algorithm in the future. Although several commercial wind farm simulation tools exist, they are based on the Weibull representation of the wind field and power curve of a wind turbine. These tools can be used to estimate the annual energy production of a wind farm but not for dynamic wind farm simulation and validation of wind farm algorithms [7]-[10].

A number of similar investigations focused on the time-domain simulation of a wind farm [11], [12]. A CFD solver for the incompressible Navier-Stokes equation coupled with FAST, an open source wind turbine simulator based on multi-body dynamics, was used for a wind farm simulation [11]. However, it required significant computational power and is not suitable for fast wind farm simulation. A wind farm simulation tool requiring less computational power was developed, however the simple engineering wake model based on mass conservation in a linearly-expanding wake field was used, and the superposition of multiple wakes was not considered [12]. The simulation tool is developed using MATLAB with a combination of m-scripts and Simulink, thus not suitable for fast simulation of a wind farm with tens and hundreds of wind turbines.

In this study, a wind farm simulation tool that requires low computational power for a fast simulation for a wind farm with hundreds of wind turbines; the simulation tool is not coupled with a simple engineering wake model, rather, a more accurate model was developed. To develop this model, a C code consisting of a wake model was developed based on the eddy viscosity turbulence closure, wake propagation algorithm, wake superposition algorithm, and NREL 5 MW wind turbine model. The developed time domain wind farm simulation tool was validated with the experimental results from an offshore wind farm in Europe available in literature.

To simulate the ambient wind field, turbulence must be produced. The ambient turbulence applies mechanical loads on the wind turbines and causes fluctuations in the electrical power generation of the wind turbines. The turbulent wind field can be expressed as a summation of the average wind speed and turbulence, and the turbulence can be obtained from spectrum models such as von Karman [13] and Kaimal spectrums. In this study, Kaimal spectrum that was used for the turbulence is known to correspond with the Kolmogorov theory, and it is also recommended by the standard, IEC 61400-1[14]. 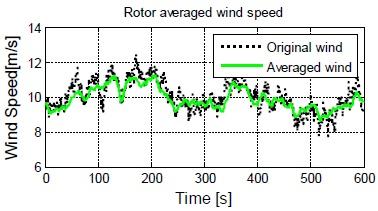 To exemplify the wake from a single wind turbine, the eddy viscosity wake model proposed by Ainslie [15] was used. The mathematical expression of the model is shown in Equation (1). The model is based on Reynolds-averaged Navier-Stokes equation (RANS) and assumes an axi-symmetric flow field. The model disregards the pressure gradient in the downstream direction that dominates the wind field near the field wake region; the area is known have a distance that is twice the rotor diameter from the upstream wind turbine. Hence the model is not suitable to predict the near-field wake. A rotor with a diameter of approximately six to twelve is used for turbine spacing in offshore wind farms; disregarding the downstream pressure gradient in the model was acceptable. The Ainslie model or any of its variations is applied in a few commercial codes that are commonly used for wind turbine analysis and wind farm design and analysis. Equation (1) shows the governing equation of the Ainslie’s eddy-viscosity wake model.

Secondary headings should be aligned to the left and designated by A, B, C, and so on. The first letter of each word is capitalized except for prepositions, articles, and conjunctions. The font is 10 point size.

In Equation (1), U and V are the axial and radial wind speeds, respectively, x is the axial distance, r is the radial distance coordinate from the wake centerline, and is the Reynolds stress. The Reynolds stress generated by the wake is obtained by a separate equation in Equation (1) that includes the eddy viscosity ε that was obtained by an empirical equation available in literature [15].

To solve Equation (1), a boundary value of the velocity deficit is required and given by empirical equations [15].

where DM is the velocity deficit, U0 is the undisturbed wind velocity, Uw is the wind velocity in the wake region, CT is the thrust coefficient, and I0 is the ambient turbulence intensity in percentage.

The eddy-viscosity model was solved by Thomas algorithm with Crank Nicolson center differencing scheme of the finite difference method, and the wind field within the wind farm was obtained.

The wakes caused by multiple upstream wind turbines in a wind farm are merged and affect downstream wind turbines. To represent the effect mathematically, the wakes were combined by the square root of the sum of the square of the deficits-a technique commonly used in commercial codes [16].

Fig. 3 shows the wind farm simulation algorithm with the computed values and the input and output variables associated to them. The simulation tool runs in the time-domain with inputs including ambient wind data with a sampling frequency, wind turbine coordinates, and the total power demand from the transmission system operator (TSO). 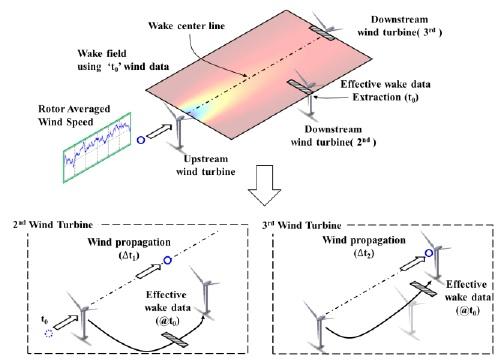 Although the simulation tool considered wind and wake propagation in the time domain, the wake model that was used in this study is based on the Reynolds-averaged Navier-Stokes equation that is basically a static model. Hence the simulation tool calculates the steady wake field in each step according to various wind speeds to simulate turbulent wind flow in the time domain, and the result is applied to downstream wind turbines using same algorithm. A similar method known as the sliding mesh method is used in commercial CFD codes for transient flow field analysis using steady-state solutions based on Reynolds-averaged Navier-Stokes equation [19].

A. Wake from a Single Turbine

Fig. 5(a) shows the wake field calculated in the downstream from NREL 5MW reference wind turbine using the Ainslie’s eddy viscosity model. The thrust coefficient, CT, used for the wake calculation was 0.8 that is approximately the thrust coefficient that modern wind turbines have in operations below their rated wind speeds. As shown in the figure, the solution is obtained from the two-rotor diameter downstream from the wind turbine, and the axi-symmetric wind field is expanded in the lateral direction. 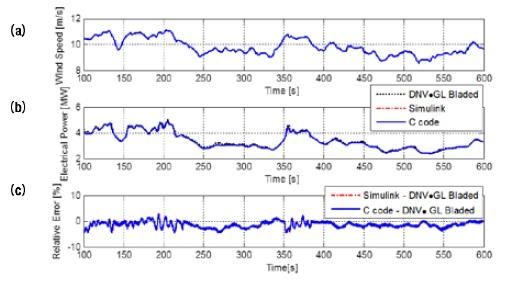 Fig. 6.Electrical power outputs for the turbulent wind data obtained from the developed tools and DNV⋅GL Bladed for (a) wind speed, (b) electrical power, and (c) relative error.

Therefore, the wind turbine model used for the wind farm simulation in this study was found to be valid.

C. Validation of Power Output from a Wind Farm

To simulate and validate the wake field in a wind farm, the Horns Rev 1 offshore wind farm in Denmark was considered because the power output from the wind farm is available in literature.

The Horns Rev 1 consists of 80 Vestas V80 2 MW wind turbines with 8 rows and10 columns. The turbine spacing is seven times the rotor diameter of the turbines. In literature, the power output from the wind farm at a wind speed of 10 m/s is given for different wind directions with an interval of 5°. For the simulation, the dynamic model of the wind turbine and a suitable wind turbine controller are required. However, obtaining such data or model of commercial wind turbines such as V 80 from the wind turbine manufacturer is not possible. Hence the wind turbine’s power and thrust curves as a function of wind speed were used to simulate Horns Rev 1 offshore wind farm just for validation instead of using the dynamic wind turbine model and the controller. The wind data consisting of 500 sets with a constant wind speed of 10 m/s were used for this simulation. The power curve and thrust curve of the turbine were obtained from WindPRO, a commercial code used to predict annual power productions of wind farms. The curves and the layout of Horns Rev 1 wind farm are shown in Fig. 7.

Fig. 8 shows the simulation results for the wind farm and the experimental results available in literature. The total simulation time was approximately 10 seconds. The y axis represents the power summed for each column of wind turbines divided by the power summed for the first column of wind turbines. The x-axis represents the distance by multiplying the rotor diameter. For the comparison with the experimental data, the simulation was performed for different wind directions from -15° to +15° with an interval of 5°. Simulation was performed by fixing the wind direction with varying the base angles of the wind farm layout. 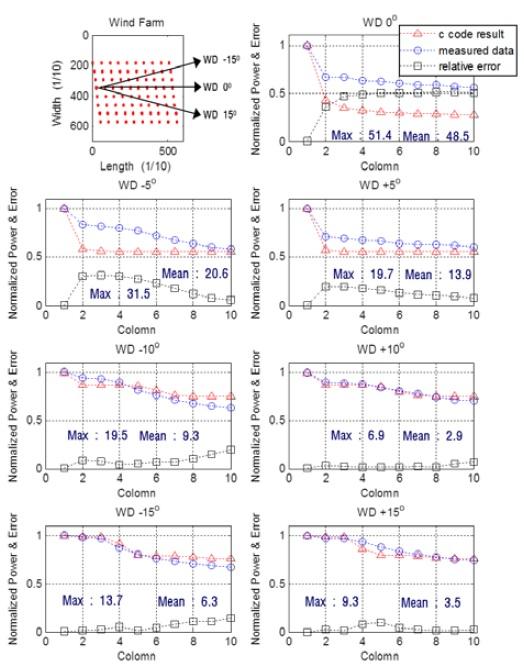 As shown in Fig. 8, the power output drops dramatically in the second column compared to the first column and gradually drops in the subsequent columns. The results from the simulation tool mostly do not fully predict actual power output when the wind direction is close to 0°. This implies that the eddy viscosity wake model used in the simulation overestimated the velocity deficit in the wake field. The largest discrepancy occurred when the wind direction is WD 0°. When the wind direction changes from WD 0° to WD +/- 15° the discrepancy appears to decrease. The change of discrepancy with wind direction is attributed to meandering, a fluctuation of the wake center. In reality, the wake center deviates from the straight downstream direction, and the downstream wind turbine might be partially affected by the wake generated by the upstream wind turbine because of meandering. However, this is not considered in the eddy viscosity wake model.

Figure 9 shows the dynamic simulation results from the simulation tool. The same Horns Rev wind farm layout in the previous section was also used. For the dynamic simulation, 5MW research wind turbine models developed by NREL were used instead of Vestas 2MW wind turbines because all the turbine information needed is available in literature. The mean wind speed was 10 m/s and the turbulence intensity was 9%. The wind direction was WD 0°. The time interval of the simulation was one second. It took approximately 80 seconds to simulate 80 wind turbines for 2200 seconds. 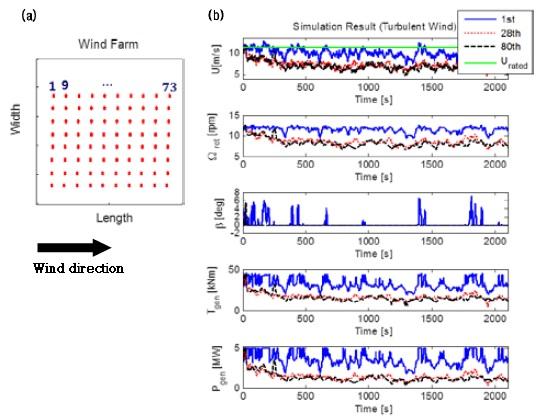