Wireless power transfer technologies typically include inductive coupling, magnetic resonance, and capacitive coupling methods. Among these methods, capacitive coupling wireless power transfer (CCWPT) has been studied to overcome the drawbacks of other approaches. CCWPT has many advantages such as having a simple structure, low standing power loss, reduced electromagnetic interference (EMI) and the ability to transfer power through metal barriers. In this paper, the CCWPT system with 6.78MHz class D inverter is proposed and analyzed. The proposed system consists of a 6.78MHz class D inverter with a LC low pass filter, capacitor between a transmitter and a receiver, and impedance transformers. The system is verified with a prototype for charging mobile devices.

Recently, the application of wireless power transfer (WPT) in charging mobile devices and the electric vehicles is widely researched. WPT are generally classified as magnetic resonance, inductive coupling, and capacitive coupling. Magnetic resonance WPT uses resonance with the transmitting coil and receiving coil. The method has many advantages such as long distance transfer and user convenience. However, the system has not been commercialized because of electromagnetic interference (EMI), human activity, and some imposed regulations [1], [2]. Inductive coupling WPT follows the same principle of a transformer in the power converter. Despite having good efficiency and developed commercialization techniques, inductive coupling WPT has disadvantages such as one position power transfer, heat dissipation in the metal barrier, and the large coil volume [3], [4]. The prior two approaches employ the magnetic field, hence the presence of radiation noise and power transfer metal interference. In contrast, capacitive coupling wireless power transfer (CCWPT) uses electric field and displacement current to transfer wirelessly power; this approach is also called contactless power transfer [5], [6].

Fig. 1 shows the simple structure of the CCWPT system. Direct current (DC) voltage is converted to alternating current (AC) voltage that supplies two primary metal plates using a high-frequency inverter. Two secondary plates are located adjacent the structure and the electric field enables the displacement current to flow. The DC output voltage can be obtained with a rectifier. Coupling capacitance is an important factor in transferring energy and operation stability. However, the realized capacitance is limited by the available area of the device being used. The power conversion circuit is a series resonant type circuit that produces high frequency AC voltage. In the other approaches, a simple full bridge inverter is used to make the series resonance between the inductor and coupling capacitor [7]. If the obtained capacitance is very small, the simple resonant circuit limits the transferring. The quality factor is very high hence the operation is unstable.

Fig. 1.The simple structure of the CPT system.

A high-frequency operation and impedance transformation is a viable solution to overcome this drawback. Operation frequency selection is necessary to meet wireless regulations in mobile wireless charger applications and standardize the operation frequency of industrial, scientific, and medical (ISM) band. A silicon power semiconductor cannot be driven with a very high frequency like the GHz operation. 6.78MHz and 13.56MHz ISM bands can drive the silicon power semiconductor, reducing the quality factor and meeting regulations. However, the 13.56MHz band is already used in other application. Hence 6.78MHz operation can meet wireless regulations without obstructing other devices and help transfer energy with a small capacitance in the CCWPT.

This paper is proposes a 6.78MHz CCWPT system with a Class D inverter, LC low pass filter, and impedance transformation circuit. A theoretical estimation of the capacitance is shown according to width of the plastic molding. Moreover, the design procedures of the LC filter and impedance transformation circuit are shown with the area of the electro metal plates and receiving power. The system is verified with the 5V and 800mA output for charging a mobile device.

Fig. 2 shows a proposed 6.78MHz CCWPT system. Spro is a path switch that controls the input power by monitoring input current. Class D inverter and LC low pass filter are used for the transmitting circuit. The LC low pass filter suppresses EMI noise from the rectifier. A zero voltage switching (ZVS) can be achieved by below resonance operation of the Lf and Cf. Lr is the transferring power to the receiver by a resonance with coupling capacitors, Cc1 and Cc2. Cb is a DC blocking capacitor for non-saturation of a step-up transformer. A step-up transformer is used to make the impedance of the coupling capacitance, Cc1 and Cc2, whereas the small and step-down transformer reduces the quality-factor (Q-factor) of the series resonant circuit. The optimized Q-factor can be obtained by turn-ratios of the step-up and step-down transformers. Fig. 3 shows the waveforms of the resonance parts. The resonance with Lr, Cc1, and Cc2 facilitates the energy transfer to the load. A driving stage consists of a 6.78MHz crystal oscillator, gate signal generator, time delay circuit, protection circuit, and gate driver. The proposed system works with high frequency, hence the time delay circuit design and gate driver are important. The driving block is applied with a general circuit. 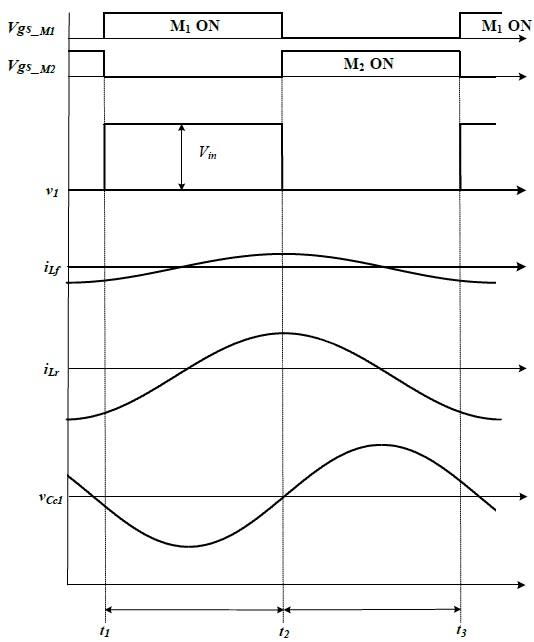 Fig. 3.Waveforms of the proposed system.

Fig. 4.Structure of capacitor between transmitter and receiver. 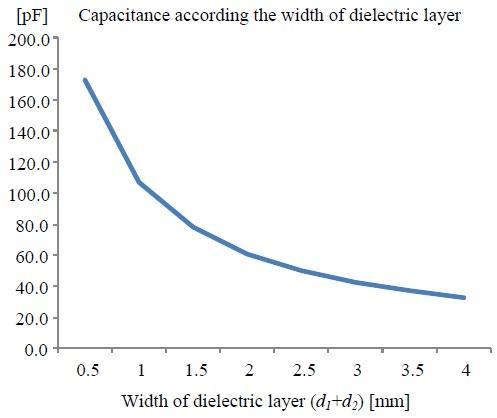 Fig. 6.Capacitance according the width of dielectric layer.

A low pass filter design is important for the ZVS operation of the main switches and suppression of harmonic component. Fig. 7 shows the AC equivalent circuit for the LC filter design. Rac is an equivalent AC resistance for the fundamental transfer gain for the resonant DC/DC converter and can be expressed as 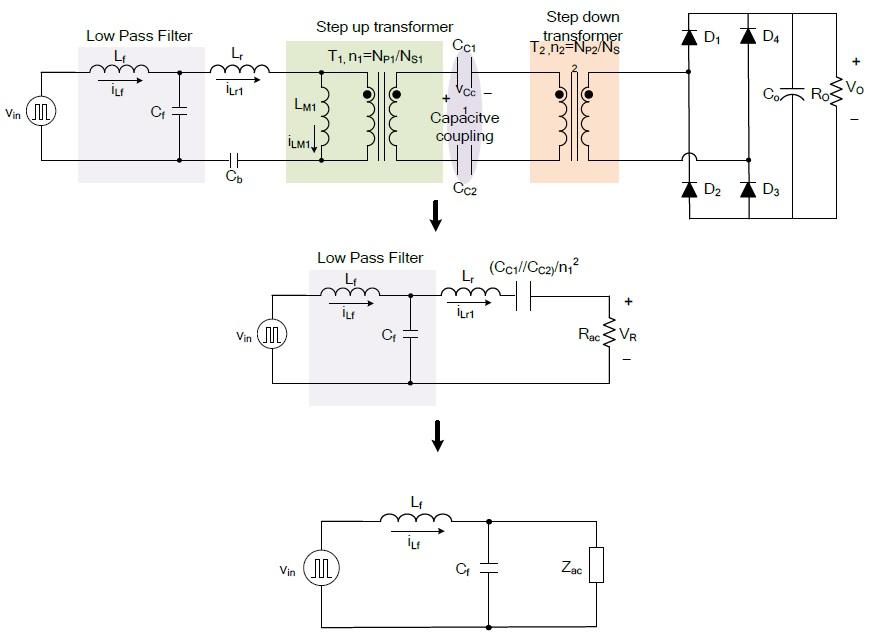 where Ro is the output resistance [9]. The impedance of the LC low pass filter can be expressed as

where ω is the angular frequency. The design of Lf and Cf is can be obtained with the Butterworth low pass filter. The Butterworth filter can be designed using equation (5) and equation (6) to determine the Lf and Cf values

where ωc is the cutoff frequency and |Zac,ωc| is the magnitude of the output impedance at the ωc.

C. Voltage Gain Considering the Parasitic Component of the Step-Up and Step-Down Transformer

Fig. 8.Equivalent circuit for the voltage gain without the parasitic components.

where VRF and VinF are the fundamental components of the input and output, Q is the quality factor, f0 is the resonant frequency, and f is the switching frequency of the class D inverter. The Q is high and the voltage gain curve is sharp, hence the unstable operation. The output voltage feedback cannot control the CCWPT, thus a low Q is needed to obtain the constant output when the resonant frequency changes. Fig. 9 shows the voltage gain according to the n1 and n2 if the coupling capacitance is 30pF. The CCWPT can determine the output voltage gain with the design of the turn ratios of the step-up and step-down transformer. If the switching frequency only changes by 5%, the voltage gain is sharply reduced without the step-up and step-down transformers, as shown in Fig. 9. Therefore, the impedance transformation circuit is needed to obtain the small Q for a stable output voltage without feedback control. 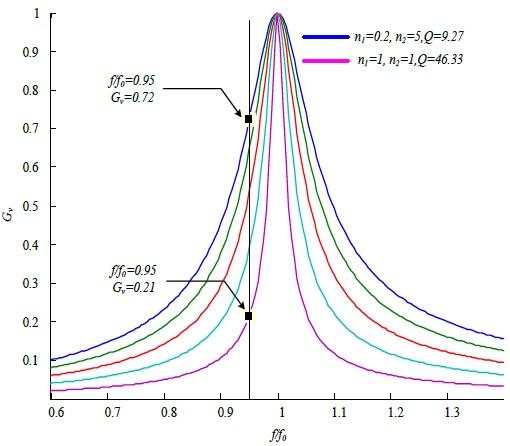 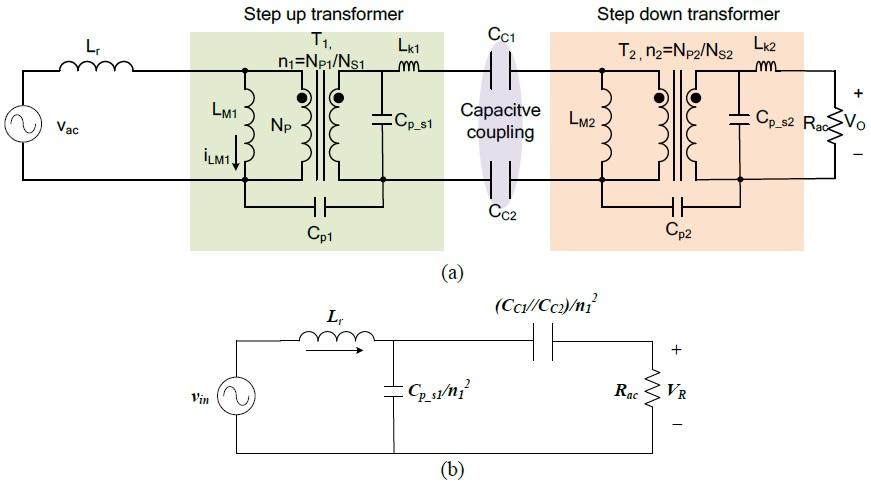 Fig. 10.Circuit diagram with the parasitic component. (a) Simplified circuit . (b) Equivalent circuit for the voltage gain.

This equation shows that the output voltage cannot be obtained if the Cp_s1 is large. This implies that the very small turn ratio of the step-up transformer to make a small Q has a large parasitic capacitor, Cp_s1, and the power is not transferred to the load.

A prototype system is implemented to verify the design. The parts used and parameters are shown in Table 1. The turn ratio of the step-up and step-down transformers is designed to obtain the low quality factor below one, and the RF carbonyl core is used to reduce the core loss in the 6.78MHz operation. The prototype is made for a mobile charger for many electronic systems such as standalone, automotive, and consumer electronic devices. The prototype system has a boost converter in the input stage and buck converter for the charger in the receiver system such as a mobile device, tablet, personal computer, or other hand-held devices, as shown in Fig. 11. Fig. 12 shows the experimental waveforms of the prototype CCWPT. Fig. 12(a) shows the gate signal for the Class D inverter switches. The gate signal is not simultaneously turned on. The output voltage is a 6.78 MHz sinusoidal waveform, as shown in Fig. 12(b). The measured capacitance of the coupling capacitor is approximately 200pF with an area of 100 cm2 in the 6.78MHz operation. The cut-off frequency of the LC low pass filter is designed with the 9MHz operation, and the waveform of the LC low pass output is shown in Fig. 12(c). The excellent rectification of the received voltage is shown in Fig. 12(d). The rectified voltage is 18.6 V in the 5V/800mA charging, as shown in Fig 13(a). The rectified voltage increases with decreasing charging current because the quality factor reduces with a large output voltage at the light load condition in the series resonance DC/DC converter. The 17 V output voltage is obtained when the position of the receiver is changed and the capacitance is 120pF. The efficiency is about 76% from the boost output stage to the rectified stage in a full charging current. Power loss mostly occurs in semiconductor devices because of the high frequency switching loss and conduction loss in the rectifier. The magnetic resonance WPT is utilized to compare the efficiency with the proposed system. The prototype of the magnetic resonance WPT used the same 6.78MHz transmitting and receiving circuit in Fig. 11 and has two coils with impedance matching. The efficiency of the proposed CCWPT and magnetic resonance WPT are almost identical at a full charging current condition, as shown in Fig. 13(b). However, the proposed CCWPT has higher efficiency in the light load condition, and the standby power consumption is significantly less than that of the magnetic resonance WPT. 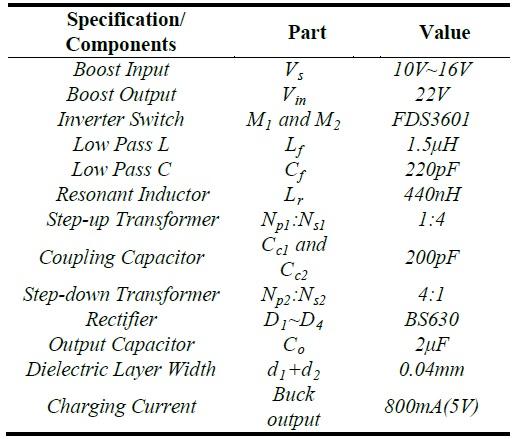 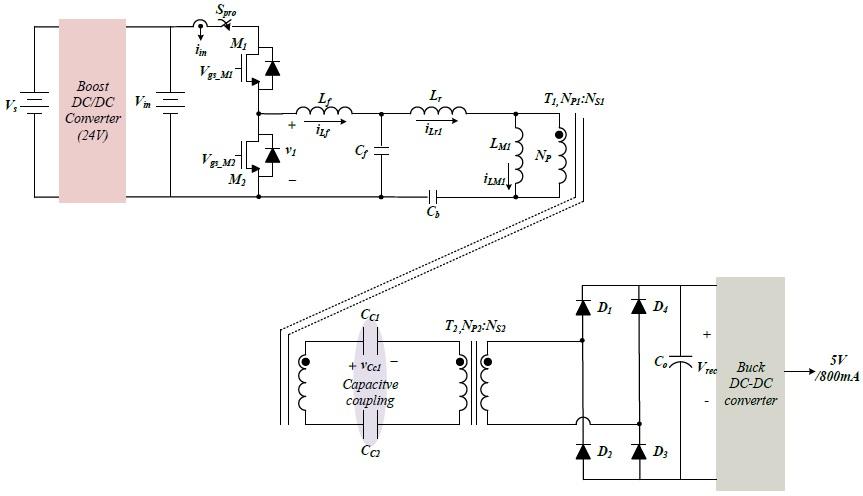 Fig. 11.Prototype system for the experiment. 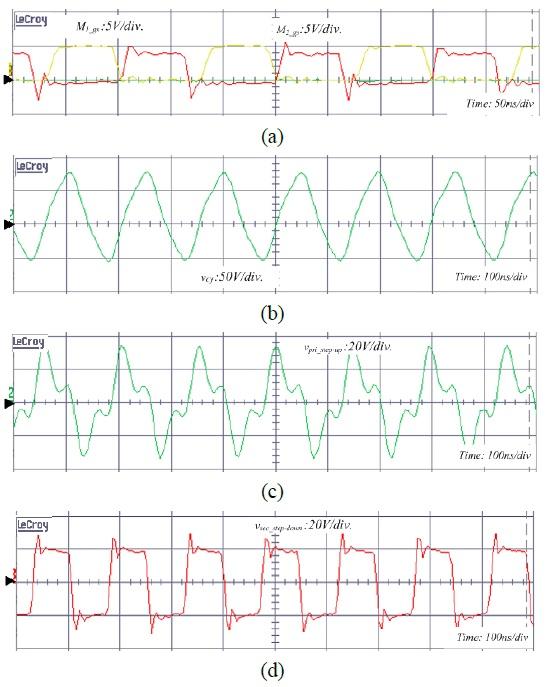 In this paper, a new CCWPT system is proposed for a mobile device charger. The system consists of a class D inverter, LC filter, and impedance transformation circuit such as the step-up and step-down transformers. The coupling capacitance is primarily determined by the width and permittivity of the dielectric layers. The step-up and step-down transformers increase the coupling capacitance and reduce the Q-factor, hence output power can be obtained in the resonant frequency variation. The characteristics are verified with the prototype for the 4W mobile device charger, and the proposed system has better efficiency than that of the magnetic resonance WPT with full load and no load. The proposed system has a very low standby power consumption, particularly at the zero charging current. Therefore, the proposed CCWPT system can be applied in the WPT for mobile chargers and contactless power transfer for other electric devices.