The Korean Society for Computational and Applied Mathematics (한국전산응용수학회)

Retrial queues are queueing systems in which arriving customers who find all servers occupied may retry for service again after a random amount of time. Retrial queues have been widely used to model many problems/situations in telephone systems, call centers, telecommunication networks, computer networks and computer systems, and in daily life. For an overview regarding retrial queues, refer to the surveys [7,12,16]. For further details, refer to the books [4,8] and the bibliographies [1,2,3].

We consider the MX/G/1 retrial queue where customers arrive from outside the system in batches according to a Poisson process with rate λ. The batch sizes are independent and identically distributed (i.i.d.) random variables with a generic random variable B and common distribution ℙ(B = k) = bk, k = 1, 2, . . .. Let be the probability generating function (pgf) of the batch size distribution. The service times are i.i.d. random variables with a generic random variable S. Let β(s) = [e−sS] be the Laplace-Stieltjes transform of the service time distribution. The inter-retrial time, i.e., the length of the time interval between two consecutive attempts made by a customer in the orbit, is exponentially distributed with mean ν−1. The arrival process, the batch sizes, the service times, and the inter-retrial times are assumed to be mutually independent. The offered load ρ is defined as ρ = λ[B][S]. It is assumed that ρ < 1 for stability of the system.

The main contribution of this paper is to find the light-tailed asymptotics for the queue size distribution in the MX/G/1 retrial queue, when the service time and batch size distributions have finite exponential moments, i.e.,

In order to obtain the light-tailed asymptotics, we assume that there is a real number σ satisfying

for positive constants a, c0 and c1, where N is the number of customers in the orbit at steady state and C is 0 if the server is idle at steady state and 1 otherwise. The constants a, c0 and c1 are given explicitly. The results (4) and (5) are obtained by investigating the pgfs for C and N through decomposing a component of the pgfs as a sum of the principal part and the analytic part. Our result generalizes the result of Kim et al. [10] to the MX/G/1 retrial queue.

The paper is organized as follows. In Section 2, we study the pgfs for the server state and the number of customers in the orbit. In Section 3, we prove (4) and (5). In Section 4, numerical results are presented to illustrate our results.

Consider the MX/G/1 retrial queue at steady state. Recall that N is the number of customers in the orbit and C is 0 if the server is idle and 0 otherwise. We suppose that (3) holds. We define the pgfs p0(z) and p1(z) as follows:

where at z = 1 is interpreted as

The following lemma decomposes as sums of the principal parts at z = σ and the analytic parts.

has a removable singularity at z = σ. Let

In this section we prove the main result of this paper which provides the tail asymptotics of the queue size distribution in the MX/G/1 retrial queue when condition (3) holds.

and Γ(·) denotes the gamma function.

We note that has the power series expansion at z = 0:

Following the same argument as in the proof of Theorem 1 in Kim et al. [10], we get

Now we consider the power series expansions of the two terms on the right-hand side of (16) separately as follows:

By the same method which we used to derive (10), we obtain

Therefore, the following corollary is immediate.

Corollary 3.2. If (3) holds, then the queue size N and the number of customers in the system, C + N, have distributions with the following tail asymptotics:

In this section numerical examples are presented to illustrate our results. We consider the following batch arrival retrial queueing model. 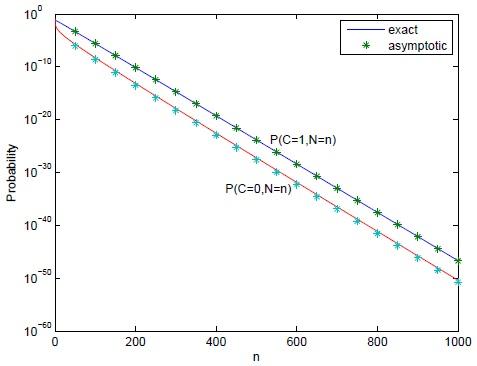 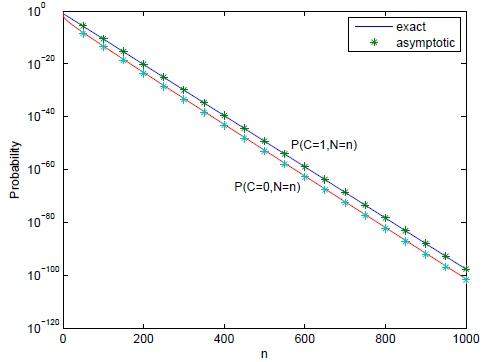