Journal of Electrochemical Science and Technology

In the stratosphere, the air is stable and a photovoltaic (PV) system can produce more solar energy compared to in the atmosphere. If unmanned aerial vehicles (UAVs) fly in the stratosphere, the flight stability and efficiency of the mission are improved. On the other hand, the weakened lift force of the UAV due to the rarefied atmosphere can require more power for lift according to the weight and/or wing area of the UAV. To solve this problem, it is necessary to minimize the weight of the aircraft and improve the performance of the power system. A regenerative fuel cell (RFC) consisting of a fuel cell (FC) and water electrolysis (WE) combined PV power system has been investigated as a good alterative because of its higher specific energy. The WE system produces hydrogen and oxygen, providing extra energy beyond the energy generated by the PV system in the daytime, and then saves the gases in tanks. The FC system supplies the required power to the UAV at night, so the additional fuel supply to the UAV is not needed anymore. The specific energy of RFC systems is higher than that of Li-ion battery systems, so they have less weight than batteries that supply the same energy to the UAV. In this paper, for a stratospheric long-endurance hybrid UAV based on an RFC system, three major design factors (UAV weight, wing area and performance of WE) affecting the ability of long-term flight were determined and a simulation-based feasibility study was performed. The effects of the three design factors were analyzed as the flight time increased, and acceptable values of the factors for long endurance were found. As a result, the long-endurance of the target UAV was possible when the values were under 350 kg, above 150 m2 and under 80 kWh/kg H2.

Stratospheric long-endurance hybrid UAVs have been developed to perform not only military missions, such as surveillance and reconnaissance of a very wide range, but also commercial missions, such as meteorological observation, aerial photography, communication relaying, internet network construction and disaster observation, at higher altitudes than normal atmospheric airplanes. Because the UAV flies in the stratosphere, where the weather barely changes, it is possible to ensure stability, which is one of the most important factors when the UAV is operated. Additionally, PV systems can generate more power there because they are exposed to a greater quantity of solar radiation than in the atmosphere. Because the UAV is operated at a lower altitude than satellites, it is easy to maintain and can minimize data loss and delay. Therefore, it is possible to improve the results of the mission and provide continuous services by operating the UAV in the stratosphere [1].

Many research teams have developed high-altitude long-endurance (HALE) hybrid UAVs. NASA developed the Pathfinder series and Helios until 2003 under the Environmental Research Aircraft and Sensor Technology (ERAST) project [2-4]. These UAVs apply hybrid systems that consist of PVs, batteries, and FC systems. The total weight of the Pathfinder-plus is 317 kg, its wing area is 87.12 m2 and its maximum altitude is approximately 24 km. Helios is 907 kg, with a wing area of 183.58 m2, and can fly at 29.5 km [3]. Thales Alenia Space developed StratoBus, an airship driven by hybrid systems that consist of solar cells, batteries, polymer electrolyte membrane fuel cells (PEMFCs) and polymer electrolyte membrane water electrolysis (PEL) systems. The target altitude is 20 km, and its endurance is 5 years [1]. Boeing developed the Solar Eagle, which applies hybrid systems that consist of solar cells, solid oxide fuel cells (SOFCs), and PEL systems. Solar Eagle has a target 20-km altitude and 5-year endurance [1,4]. QinetiQ developed Zephyr, which uses solar cells and Li-S batteries. Zephyr achieved an approximately 21.5 km altitude and 336 h, 21 min endurance in 2010 [3-6]. Despite these developments of stratospheric long-endurance UAVs, there are still issues that should be solved to maintain stratospheric long-endurance flight. Providing an additional supply of fuel is impossible in the stratosphere, and PV systems cannot generate power at night. Thus, a secondary power system is necessary. Furthermore, stratospheric long-endurance UAVs should endure extreme conditions, such as a very low temperature of -56.5 ℃, high ultraviolet index, and low air density [1]. Additionally, because the lift force of the UAV in the stratosphere is less than in the atmosphere, it is necessary to make the weight of the UAV light and the wing area large.

In this paper, we studied the feasibility of a stratospheric long-endurance hybrid UAV based on an RFC system. The specific energy of RFC systems is 400~1000Wh/kg, higher than the 240 Wh/kg of Li-ion battery systems [4,7], making them lighter than batteries to supply a given energy to the UAV. The use of RFC systems would therefore make the UAV lighter. However, because the present technical level of the RFC systems and the generation efficiency of hydrogen-oxygen is low, achieving a long-endurance mission is hard. Therefore, 3 design factors (weight of the UAV, wing area and performance of WE) that affect the performance of the UAV were set to find objective values to enable meeting the long-endurance objective. Through simulation, the effects of the factors on flight time were analyzed, and objective values of these factors were found to enable the operation of the UAV for long-endurance tasks. Then, the feasibility of the long-endurance hybrid UAV based on the RFC system was evaluated at a target altitude of 18 km. 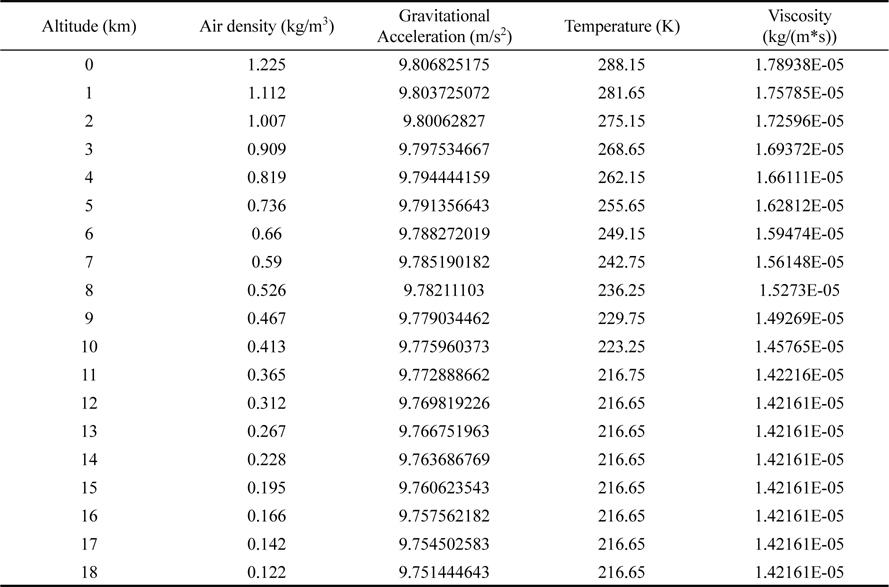 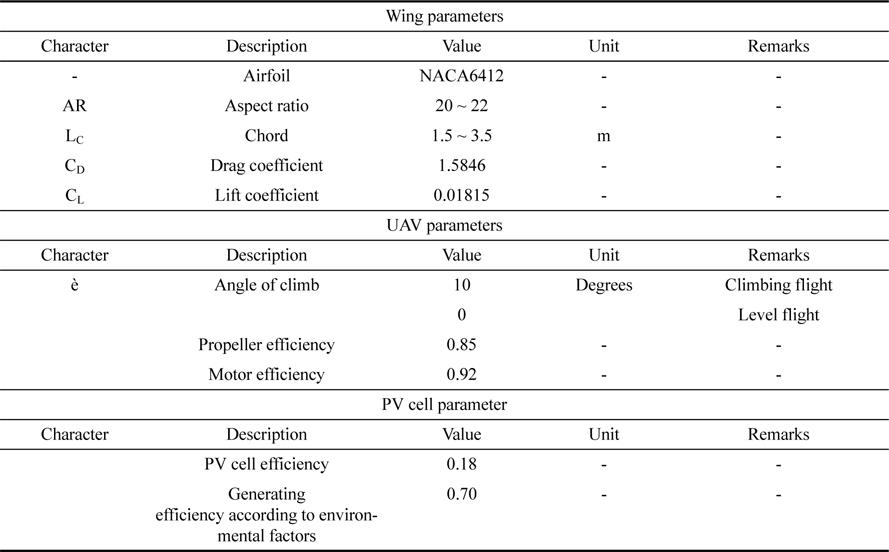 Aerodynamic equations are used to calculate the required power of a UAV, and the values of Table 1 and Table 2 are used to solve the equations. Fig. 1 shows the power applied to a UAV. 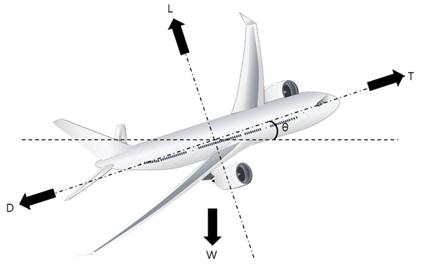 Fig. 1.Forces applied to a UAV.

The thrust (Tth) force is related to the drag and is calculated by Eq. 5 [9].

Using Eq. 1-5, the output power of a UAV considering efficiencies(PUAV) is calculated by Eq. 6 [9]. 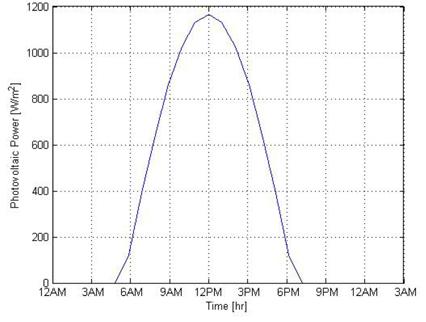 Fig. 2.Power per unit area generated by the photovoltaic system as a function of time.

The total energy generated by the PV cells (EPV) is calculated by Eq. 9.

The FC system is a 2.5 kW PEMFC. The activation area of the cells is 60 cm2. The FC stack is a dead-end type and consists of 40 cells. Fig. 3 shows the performance curve of the FC stack. The FC stack obtains a maximum power of approximately 2.5 kW at a current density of 2.05 A/cm2. Table 3 shows the driving conditions of the stacks. 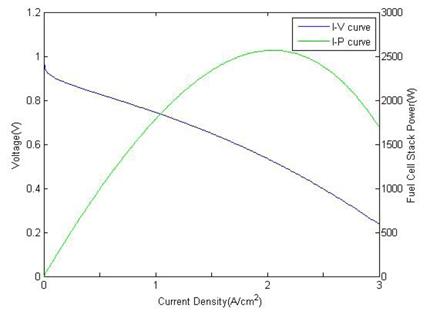 The power of the FC systems supplied to the UAV is calculated by Eq. 14.

The power generated by the FC systems is calculated by Eq. 15.

The energy generated from the FC stacks is calculated by Eq. 16.

The amount of water generated is calculated by Eq. 19.

The energy required by the WE systems to generate the hydrogen and oxygen (EPEL) is calculated by Eq. 21.

The masses of hydrogen and oxygen generated by the WE systems are calculated as the ratio between the energy supplied to the PEL stack and the energy required to generate 1 kg of hydrogen or oxygen, per Eq. 22-23.

The amount of water consumed is calculated by Eq. 24.

1) The intermediate values of each design factor are set as the reference points.

2) The climbing angle of a UAV is fixed at 10 degrees. (If the UAV arrive at the target altitude (18 km), then the angle is fixed at 0 degrees.)

3) Angle of attack is the same as the angle of climb in this simulation.

5) The installation area of PV cells is assumed to be 75% of the total wing area.

7) Before a UAV takes off, the water tanks contain the water required to generate the hydrogen and oxygen used during a level flight for one day.

3.2 Description of the design parameters

Table 4.Design factors of UAV based on RFC and the ranges of values considered 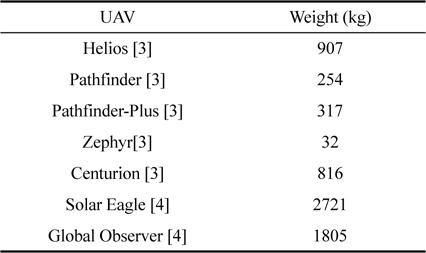 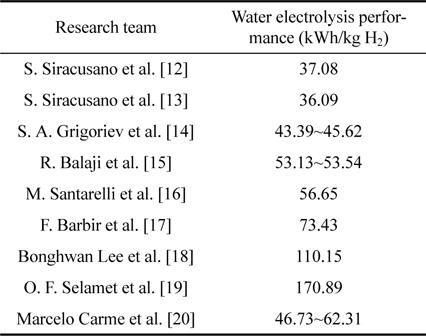 Fig. 4 shows the basic flight path at specific values of the weight of a UAV (350 kg), wing area (150 m2) and performance of the WE systems (80 kWh/kg H2). In the various simulation cases, because the power of the UAV varies according to its weight and wing area, the time needed to reach 18 km altitude can be slightly different in each case. 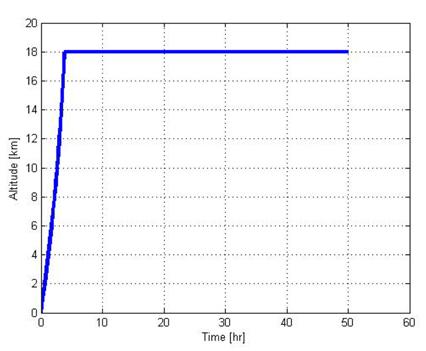 Figs. 5-6 show the amount of hydrogen and the power as functions of the flight time when the weight of a UAV is changed but its wing area and the performance of its WE systems are fixed. In Fig. 5, long-endurance operation is possible up to a weight 350 kg at the fixed reference wing area and performance of the WE systems. As the weight of a UAV increases, the power needed by it also increases. If the weight is 450 kg or more, long-endurance operation is impossible because the hydrogen is used up before the sun rises the next day, so the FC systems cannot supply the required power to the UAV based on the reference conditions, as shown in Fig. 6. On the other hand, if the weight is 350 kg or less, the UAV is capable of long-endurance operation because the amount of hydrogen is sufficient and the UAV continuously is provided the required power. 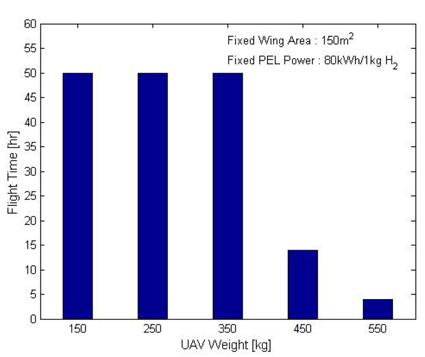 Fig. 5.Flight time according to the weight of the UAV.

Fig. 6.Amount of hydrogen and power generated with time when the weight of the UAV is changed and the wing area and performance of the WE systems are fixed. 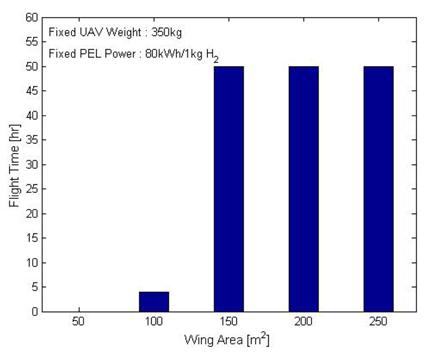 Fig. 7.Comparison of flight time according to the wing area. 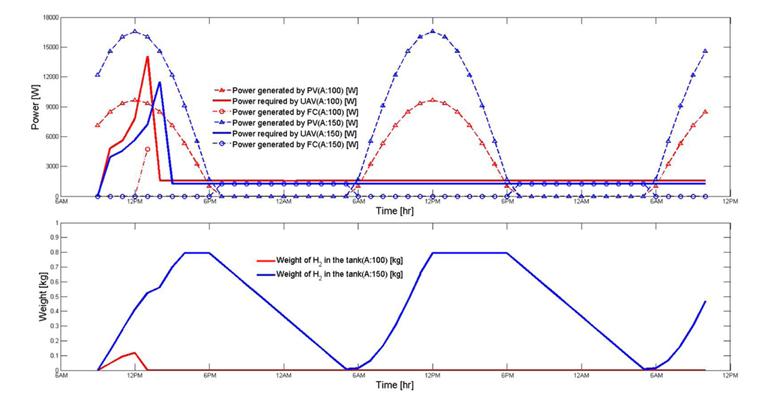 Fig. 8.Amount of hydrogen and power generated according to time when the wing area is changed and the weight of the UAV and performance of the WE systems are fixed.

4.5 Analysis of performance of water electrolysis 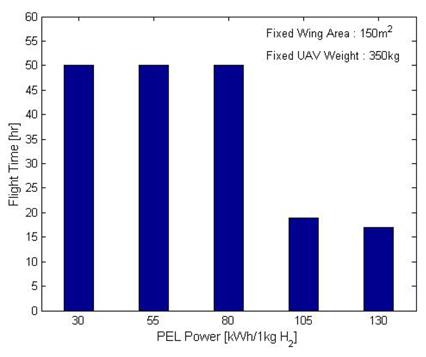 Fig. 9.Comparison of flight time according to the performance of the water electrolysis. 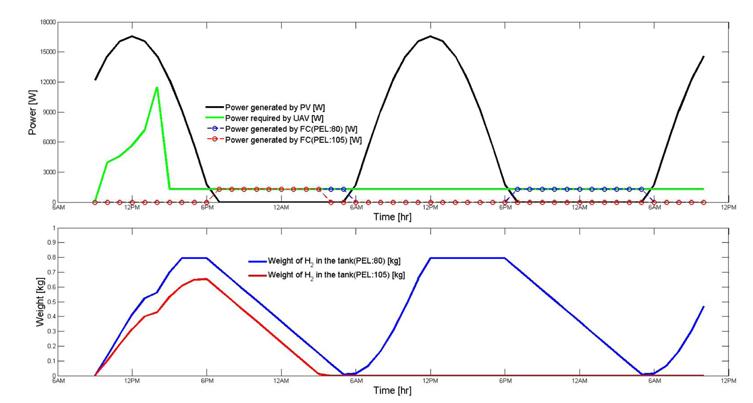 Fig. 10.Amount of hydrogen and power generated according to time when the performance of the WE systems is changed and the weight of the UAV and wing area are fixed.

To develop a good stratospheric long-endurance hybrid UAV based on RFC systems, many technologies, such as the aviation, fuel cells, water electrolysis, and PV cells, must be improved. Therefore, it is expected that this simulation-based feasibility study can provide guidance for the technical goal of each element technology and effective directions of research and development for the total system.