Recently much attention has been paid to design and synthesis of metal-organic hybrid materials with fascinating network topologies1 and potential applications as functional materials.2

Isonicotinic acid (HIN) have been widely used in synthesizing metal organic frameworks as asymmetrical rigid ligand. With regard to isonicotinic acid complex, hydrogen bonds (O-H…O) can be commonly found between uncoordinated carboxylic group and water in the complex and at the same time, π-π stackings also exist in the coordination. As a consequence, a lot of isonicotinic acid complexes can form infinite extended three-dimensional network supramolecular compounds.3 In the view of development of synthetic strategies and functional materials, the combination of carboxylate-containing ligands and neutral pyridylcontaining ligands can afford much more assembly process with metal ions through changing one of two types of organic ligands.4

All chemicals are commercially available and were used as received without further purification. Elemental analyses (C, H, N) were performed on a Carlo Erba EA-1106 Elemental Analyzer. Infrared spectra were recorded in the range from 4000 to 400 cm−1 on a Mattson Polaris FT-IR Spectrophotometer using KBr pellets. Thermogravimetric analysis (TG) was performed on a TA Discovery TGA instrument with a heating rate of 10 ℃·min−1. All reactions were carried out in 23 ml Teflon-lined stainless-steel autoclave. The vessels were filled approximately to 40% capacity. The initial and final pH of the reaction was measured using Sentron 1001 pH meter.

Single crystals of 1 and 2 were obtained by the method described in the above procedures. Structural measurement for the complexes were performed on a Bruker SMART APEX CCD diffractometer using graphite monochromatized Mo-Kα radiation (λ = 0.71073 Å) at the Korea Basic Science Institute. The structures were solved by direct method and refined on F2 by full-matrix least-squares procedures using the SHELXTL programs.6 All non-hydrogen atoms were refined using anisotropic thermal parameters. The hydrogen atoms were included in the structure factor calculation at idealized positions by using a riding model, but not refined. Images were created with the DIAMOND program.7 The crystallographic data for complex 1 and 2 is listed in Table 1.

Table 1.Crystal data and structure refinement for complexes 1 and 2 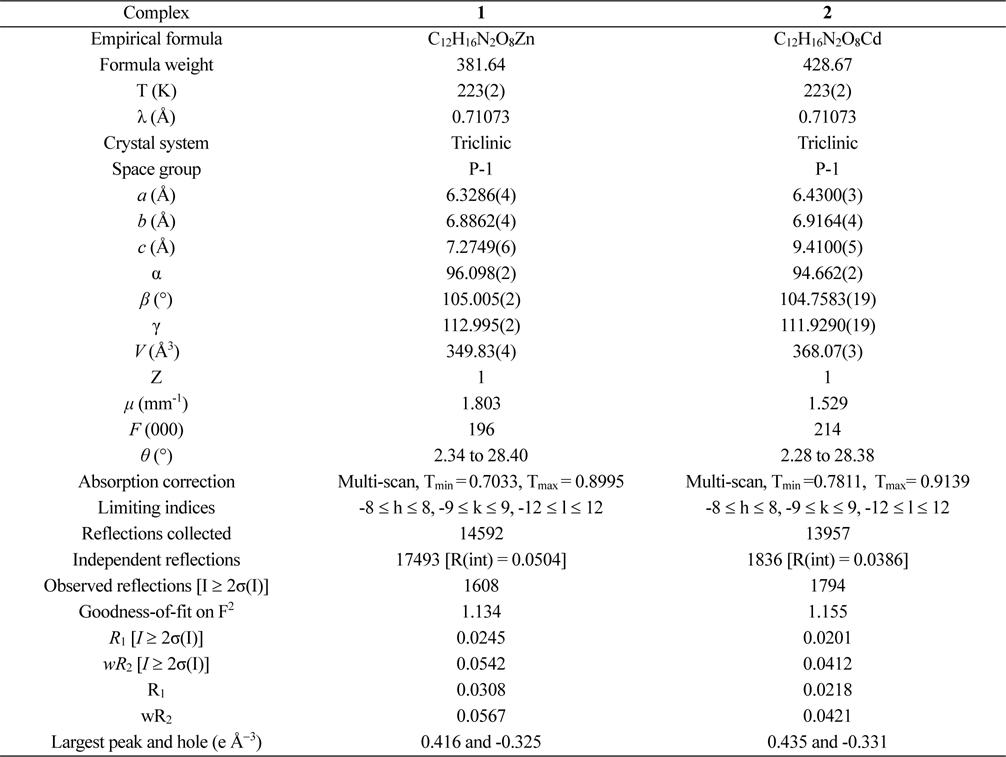 The compounds were isolated from the reaction mixture of Zn(OAc)2·2H2O (1)/Cd(NO3)2·4H2O (2), diphenic acid, 4-pyridylcarbonitrile, and H2O in the mole ratio of 1.0:1.0: 1.0:1111(1)/778(2) by the hydrothermal technique. The diphenic acid present in the initial reaction mixture was not found in the crystalline product and 4-pyridylcarbonitrile was changed to isonicotinic acid by the acid hydrolysis in the hydrothermal processes. However, the compound 1 was reported previously by the reaction of Zn(NO3)2 with isonicotinic acid.8

Our first aim in this work was to obtain the 2D or 3D network MOF complexes which metal centers are bridged by the dicarboxylate anion and N-donor system. Unfortunately, attempts to obtain such materials by varying stoichiometry, temperature, and other reaction parameters proved to be generally unsuccessful. 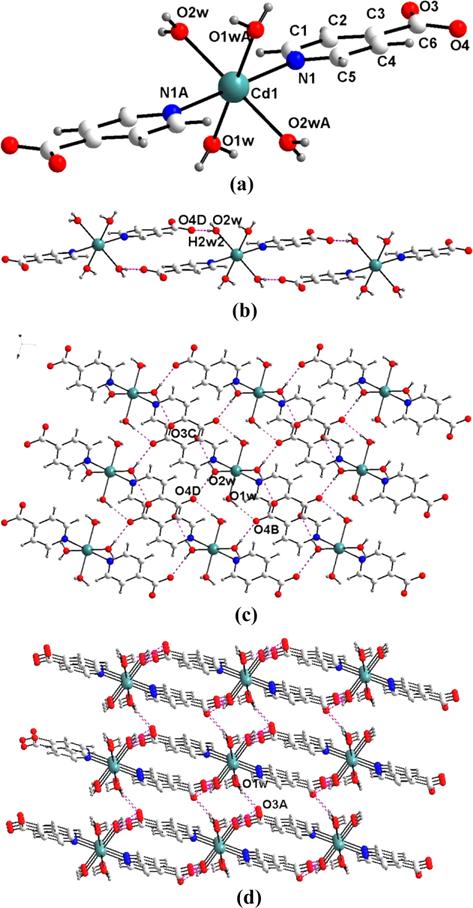 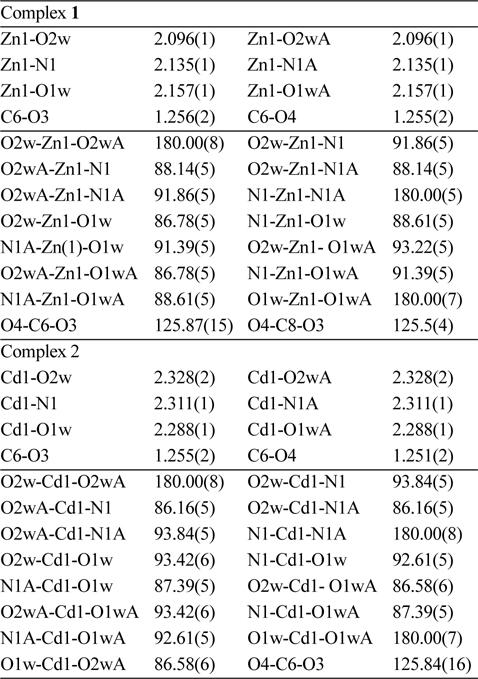 The crystal packing is directed by hydrogen bond interactions with the participation of water H-donor atoms and carboxylic group O atoms acting as acceptors (Table 3). In a typical complex 2, the hydrogen bonds (O2w–H2…O4D) form 1D chains along c-axis (Fig. 2(b)). The chains are interlinked by hydrogen bonds (O1w–H2…O4B, O2w-H1…O3C) to form 2D network along a-axis (Fig. 2(C)). In addition, hydrogen bond (O1w-H1…O3A) between the water molecule and carboxyl oxygen atom of another adjacent acplane contribute significantly to the assembly of these 2D networks into supramolecular 3D network (Fig. 2(d)). 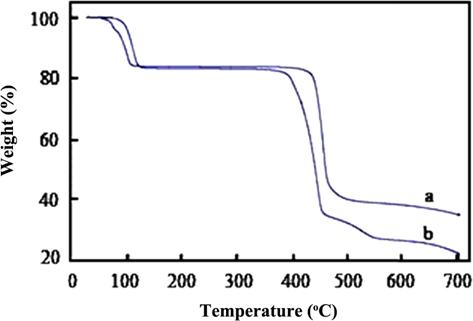 In conclusion, two new polymeric complexes, [M(IN)2 (H2O)4]n (M = Zn(1) and Cd(2)) were successfully isolated by the hydrothermal technique, respectively. In the complex, monomeric metal (II) complex is interconnected by hydrogen bond between water H-donor atoms and carboxylic group O atoms to give 3D network. The isonicotinate ligand in the crystalline product was formed from 4-pyridylcarbonitrile as initial reactant by the acid hydrolysis in the process of reaction.