The Korean Society of Phycology (한국조류학회(藻類))

Human activities such as aquaculture, fishing and interoceanic shipping have helped favoring species dispersal and increasing the risk of introduction into coastal marine ecosystems. Introduced species are often free from predators, competitors or pathogens in the areas of invasion allowing them to become common and successful in the new area, to displace indigenous species and to become economic pests (Trowbridge 1995). The ecological impacts of invasive marine species represent a major problem to global biodiversity; non-native species can alter profoundly the host ecosystems.

Codium Stackhouse (Codiaceae, Bryopsidales, Chlorophyta) is a cosmopolitan genus widely distributed in marine environments throughout the world, with the exception of the Polar Regions. It currently comprises about 143 specific and infra-specific taxa currently accepted taxonomically according to Guiry and Guiry (2016) that are mainly found in temperate and subtropical zones (Verbruggen et al. 2007). Five species are present in Tunisia, namely Codium bursa (L.) C. Agardh, Codium decorticatum (Woodward) Howe, Codium effusum (Rafinesque) Delle Chiaje, Codium fragile (Suringar) Hariot, and Codium vermilara (Olivi) Delle Chiaje (Gallardo et al. 1993). Among them only C. fragile is an introduced one. All over the world, there are ten subspecies of C. fragile (Guiry and Guiry 2016), of which three are considered invasive (Provan et al. 2008). From these, only the subsp. fragile (Syn. C. fragile subsp. tomentosoides, C. fragile subsp. scandinavicum) has received more attention over the years because of its successful invasion in both Northern and Southern hemispheres (Silva 1955, Trowbridge and Todd 2001, Hubbard and Garbary 2002). C. fragile subsp. fragile has become a nuisance by achieving high biomass and outcompeting resident species on various spatial scales. This subspecies has spread rapidly in temperate areas throughout the globe from its native range in Japan (Silva 1955, Trowbridge and Todd 2001). Its various strategies of reproduction: sexual, asexual, and vegetative (Mathieson et al. 2003), and its capacity for long-distance dispersal (Watanabe et al. 2009) contribute to the invasive success of the species, leading to ecological and economic concerns. Importation of Asian shellfish (oysters and mussels) appears as a major vector of introduction, respectively 44% in Europe and 46% in the Mediterranean Sea (Zenetos et al. 2012).

Considered as native to Japan, C. fragile subsp. fragile is a North-Pacific taxon that has been introduced world-wide (Burrows 1991, Provan et al. 2008). It first appeared on the shores of Holland before 1900 and later spread throughout Europe, rapidly colonizing the Mediterranean Sea (Silva 1955). The first introduction into the Mediterranean Sea probably dates from World War II and presumably was due to military shipping (Verlaque 1994). C. fragile was reported for the first time in Tunisia, in Northern Tunisia (lagoon of Bizerte) as C. fragile without mention of the subspecies (Djellouli 1987). The alga was later identified as C. fragile subsp. fragile (Sghaier et al. 2016).

The distribution and morphology of Codium fragile has been well described all over the world. In the Mediterranean Sea, C. fragile has been always considered as the subspecies tomentosoides (Gallardo et al. 1993). However, the recent signalization of the subspecies atlanticum on the Italian coasts (Petrocelli et al. 2013) must lead, from now on, to bring more attention to the criteria used when describing C. fragile. In this context, this paper describes the distribution and morphology of C. fragile Tunisian specimens with emphasis on the subspecies anatomical and morphological characteristics such as size and shape of thalli and utricles.

Samples were collected from April 2010 to July 2015 at two different sites located in the north of Tunisia: Marsa (Bay of Tunis) and Bizerte lagoon. Collection data are reported in Table 1.

Marsa is a rocky sandy area, rich with algae wildlife, open to the Mediterranean Western basin and located near areas with heavy boat traffic such as Goulette and Sidi Bou Said ports. The Lagoon of Bizerte has a surface area of 150 km2 with a mean depth of 7 m. This lagoon is subject to strong human pressures such as urban, industrial, and agricultural pollutions as well as the breeding of mussels and oysters in Menzel Jemil.

All specimens were collected by hand in shallow water (<2 m). Collected samples were transported freshly in an icebox. In the laboratory, the algal material was cleaned with seawater to remove the maximum of epiphytes, and then was kept in 2% formaldehyde-seawater. Fixed materials were identified using a binocular microscope (Alphaphot-2.YS2-H; Nikon, Tokyo, Japan). The identification was based on different taxonomical keys. To determinate the subspecies of Codium fragile, the morpho-anatomical details were analyzed following the keys reported in the literature (Silva 1955, Trowbridge 1998, Hubbard and Garbary 2002). Eleven morphometric traits (3 macroscopic and 8 microscopic) were measured on thalli (n = 5). Utricles were sampled at approximately 2 cm from the tip of the plant and 5 utricles were measured for each plant. 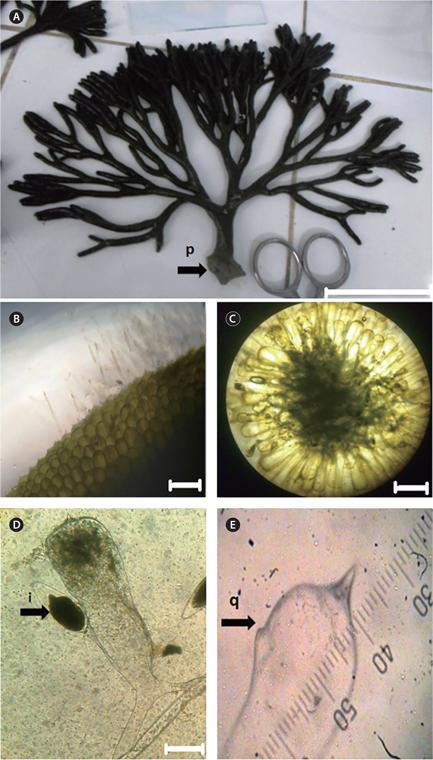 Table 2.aCodium fragile in Korea; the subspecies was not mentioned.bMinimum and maximum (n = 30).cThere was only one gametangia in these samples.

Macroscopically, our specimens were found similar to the diagnostic characters of plants collected in Bizerte by Djellouli (1987) and in Europe by Silva (1955) identified as C. fragile subsp. fragile. However, these data are different from thalli collected in Canada (Hubbard and Garbary 2002, Matheson et al. 2014) and in Korea (Oh et al. 1987). Thallus lengths of Tunisian and European samples (up to 25 cm) were smaller than Canadian ones (up to 44 cm).

The microscopic characteristics of thalli collected in this study showed that mucrons were long and sharp, with an average of 38.1 μm for Marsa samples and 47.2 μm for lagoon of Bizerte samples (Table 2). These measures are similar to mean length of mucrons of C. fragile subsp. fragile collected in Europe, but different from measures of mucrons of Canadian C. fragile subsp. fragile. Indicative features such as size and shape of mucron had been used in previous studies to distinguish subspecies of Codium fragile (Trowbridge 1998, Hubbard and Garbary 2002, Matheson et al. 2014). However, since there is a high variability in the mucron shape and dimension, as underlined by Verbruggen et al. (2007), and for unambiguously identification, molecular analysis can be required.

Concerning the position and length of gametangia, there were no significant differences between the present study and previous ones for different C. fragile subsp. fragile origins, except for native Korean samples. In fact, Korean samples are distinct from other ones considering length of thallus, utricules, and gametangia (Table 2). Differences between native alga and introduced ones in Canada, Europe, or Tunisia might be due to an ecological adaptation.

This north Pacific green alga is an established marine alien species in the Mediterranean (Zenetos et al. 2012). It is identified as one of the Europe’s top 10 invasive species (McLaughlan et al. 2014). The oldest European collection dates from 1845 in Ireland (Provan et al. 2008) and it has since spread throughout European Atlantic and Mediterranean coasts. It was discovered on the Netherlands coast in North Sea in 1900 (Silva 1955). It was introduced in the Western Mediterranean across Gibraltar in 1940 (Verlaque 1994). In 1946, it was common in Banyuls (French coast) then it reached Sicily (Battiato et al. 1980) and Tunisia in Bizerte (Djellouli 1987). In the Eastern basin, it has only been reported in the Western region of Libyan coasts (Nizamuddin 1991) (Table 3). 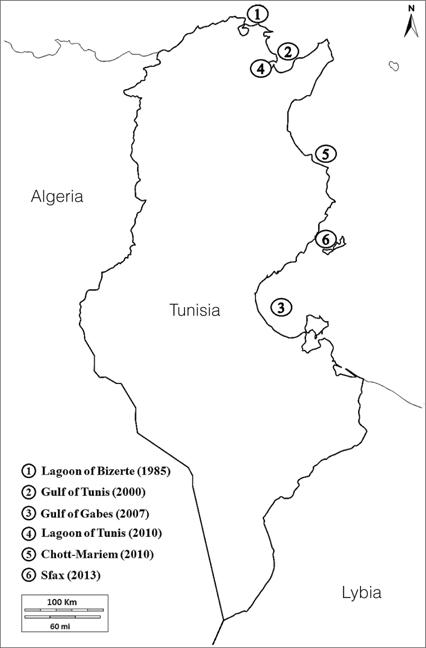 Fig. 2.Historical records of Codium fragile along the Tunisian coasts.

Invasive non-native species have complex multilevel impacts on their introduced ecosystems. Different studies considered Codium fragile as a nuisance. In fact, in addition to the high biomass; it is responsible of fouling boats and has disadvantageous impact on aquaculture (Trowbridge 1998). Chapman (1999) reported the damaging effects of C. fragile in kelp communities on the Atlantic coasts. Scheibling and Anthony (2001) confirmed negative impacts on the sea urchin Strongylocentrotus droebachiensis. The nuisance aspect of C. fragile subsp. fragile is associated with its ability to attach to living shellfish and uproot rhizomes of Zostera marina, so that it has been given different common names such as ‘eelgrass thief’ or ‘oyster thief’ (Garbary et al. 2004).

There is a big gap of information concerning the ecological effects of C. fragile on Tunisian coasts. In Mediterranean Sea, this exotic species is considered to be well established (Verlaque et al. 2015) but the potential negative impacts have never been studied. However, the arrival of other alien macrophytes has brought severe changes in the marine communities in other parts of the Mediterranean Sea (Boudouresque and Verlaque 2002). Thus, it is always important to survey the evolution of alien species. Further sampling and research on biology and ecology of C. fragile subsp. fragile would be helpful to know its real impact on the Tunisian environment.

This study allowed gathering all reports about Codium fragile distribution on Tunisian coasts. It gives a status of the situation of Codium fragile subsp. fragile in this region of Mediterranean Sea. More studies have to be done on this alien alga on environment and human activities impacts. Continuous and careful supervising of the dispersal of the species by using information campaigns towards shellfish farmers, fishermen, etc. would be useful to early detect any possible nuisance.