Electrochemical Studies on Some Substituted Thiadiazoles

The redox characteristics of 2-ketohydrazono-3-phenyl-5-substituted-2,3-dihydro-1,3,4-thiadiazoles and its derivatives (1a-h) has been investigated in nonaqueous solvents such as 1,2-dichloroethane (DCE), dichloromethane (DCM), acetonitrile (AN), tetrahydrofuran (THF), and dimethylsulfoxide (DMSO) containing 0.1 mol.dm-3 tetra n-butylammonium perchlorate (TBAP) as supporting electrolyte at platinum ectrode. Through controlled potential electrolysis, the oxidation and reduction products of the investigated compounds can be separated and indentified. The redox mechanism is suggested and proved. It was found that all the investigated compounds are oxidized in two irreversible one-electron processes following the well known pattern of EC-mechanism. On the other hand, these compounds are reduced in a single two electron or in a successive two one electron processes following the well known pattern of EEC-mechanism according to the nature of the substituent

Thiadiazoles and its derivatives are known to have many biological applications. Recently some thiadiazoles, already being included in several compounds that have potential use in treatment of diseases, as anti-inflammatory agent1, anti-influenza agent2 and anti-protozoal durg3. They deserve consideration, as a fertilizer amendment for retarding nitrification fertilizer N in soil4 and induce acquired resistance in wheat5. An important potential use in the removal of cadmium from waste water and other portable waters6. Because of this and continuing interest of our laboratory in the electrochemistry of the biologically active organic compounds7-14. It was found worthwhile to investigate the redox characteristics of substituted thiadiazoles (1a-h). These compounds were extensively studied using cyclic voltammetry in nonaqueous solvents. The number of electrons participating in each electrode reaction was determined using the coulometeric technique. Separation and identification of the intermediates and the final products were made through the controlled potential electrolysis (CPE). 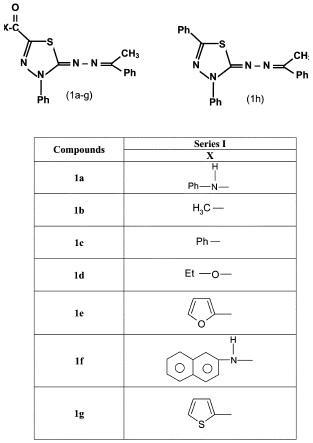 The organic compounds are synthesized according to the procedures outline in literature15. All the synthesis compounds were purified by repeated crystallization, dried under reduced pressure and the purity was checked by thin layer chromatography.

The measurements were carried out using the following apparatus: The EG& G Princetion applied research model 283 Potentiostat / Galvanostat controlled from a PS-486-DX microcomputer via a National Instrument IEEE -488 through GPIB board by means of M270/250 program was used for the electrochemical control.

All measurements were carried out with 2.5×10-5 mol of the reactant in 15 ml dry oxygen free solvent with 0.1 mol dm-3 tetra-n-butylammonium perchlorate as supporting electrolyte. 1,2-dichloroethane (DCE), Dichloromethane (DCM), acetonitrile (AN), tetrahydrofuran (THF) and dimethylsulfoxide (DMSO) were used as solvents.

During the solvent purification, all the processes were performed under a dry oxygen-free argon atmosphere. Fractionation was carried out using a 120 cm column filled with glass spirals at a recoil ratio of 50 : 1. All purified solvents were stored under argon in the dark. Purification of the different solvents was carried out as follows: EtCl2 (Merck, P.a.) was boiled for 24 h with PCl5 and then distilled. The main fraction was stirred with KMnO4 for 24 h and distilled, finally, the solvent was fractionated.

AN was purified according to the modified methods of Walter and Rumaloy16-17.

THF (Uvasol Merck) was boiled successively for 12 h with calcium hydride (Merck), 12 h with basic aluminium oxide (Woelm, Act. I), 6 h with sodium metal and 6 h with potassium metal and distilled after each process. In the last two steps the solvent was fractionated.

The working electrode was a Pt electrode 1.3 mm in diameter, the auxiliary electrode was Pt wire immersed in the corresponding electrolyte. The reference electrode was Ag /AgCl / Cl- (sat. AN) and the redox potential (E1/2) values are referred to the potential of cobaltocinuim/cobaltocene system18.

CPE experiments were carried out in dry acetonitrile containing 0.1 mol. dm-3 tetra-n-butylammonium perchlorate (TBAP) as supporting electrolyte, compound 1b is reported here as example. The potential was controlled at the current plateau of the oxidation or reduction peaks (300 mV more positive or more negative than the Ep in oxidation and reduction processes, respectively). As a working electrode, a platinum gauze electrode (ca. 80 cm2) was used. The progress of the electrolysis was followed by recording periodically the decrease in current with time. From time to time the working electrode was removed from the cell, sprayed with pure acetone and burned in a direct flame, cooled and replaced in the cell. After the electrolysis was completed, the cell was disconnected from the circuit and the solvent was evaporated in vacuum. The residue was shaken with dry ether and the supporting electrolyte was filtered off. The ethereal layer was evaporated in turn. The obtained residue was chromatographed on thin layer silica gel plates using chloroform as an eluent. The main electrolysis product obtained was scraped off the plate and extracted with acetonitrile, filtered and evaporated in vacuum. The resulting solid compound was identified.

IR spectrum (KBr) is characterized by the disappearance of the band 3364 cm-1 (NH) in comparison with that obtained for the original compound 1a.

Reduction product of 1a

IR spectrum (KBr) is characterized by the disappearance of the band 1685 cm-1 (C =O) in comparison with that obtained for the original compound 1a.

Cyclic voltammetric data are listed in Table 1. Fig. 1 show as an example the cyclic voltammogram of some investigated compounds. Compounds (1a-h) are oxidized in two irreversible oneelectron process following the well known pattern of EC-mechanism. The first electron will follow by a proton removal from the ortho-position in the N-phenyl ring forming the radical then followed by the second electron uptake from the second nitrogen atom in the N=C group forming the unstable intermediate (di-radical cation) which undergoes a ring closure forming the corresponding cation. The formed cation can be stabilized in solution through its combination with a perchlorate anion from the medium. Compounds which contain NH group (1a, 1f) undergo further oxidation. The NH will be oxidized through electron uptake followed by proton. removal to give the corresponding radical, which undergoes a dimerization reaction to give the bis compound (Scheme 1). On the other hand the reduction center in the investigated compounds seems to be the carbonyl group (C=O). The absence of this group in compound 1h is the reason for the disappearance of reduction peaks. In quasi-reversible one electron processes, these compounds are reduced to give the more or less stable anion-radical. The stability of this anion-radical can be seen from the shape of the reduction peak and also from the values of ΔEp and Ipc /Ipa. The increase of the withdrawing power of the substituent, make possible for a second electron reduction wave to give the dianion, which is basic enough to abstract protons from the media to saturate the (C=O) bond (Scheme 1). 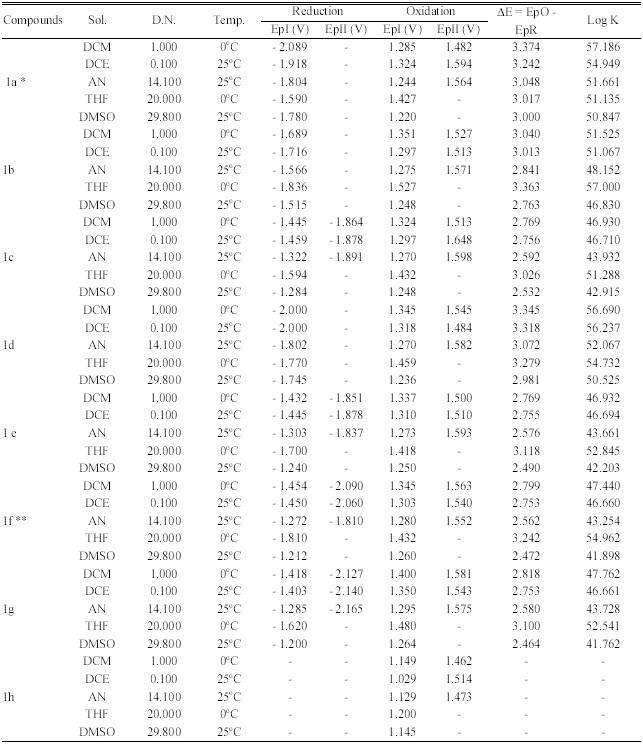 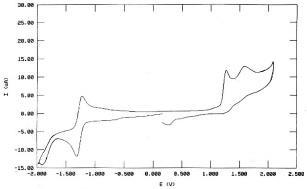 The effect of substituents on both oxidation and reduction of an electroactive site can be illustrated by applying the well-known modified Hammett equation of the form19.

Where σx is the Hammett constant, ρx is the polarographic reduction or oxidation constant and Ep*, EpH are the peak potential of the substitued and unsubstituted compounds respectively. Fig. 2a, b illustrate the Hammett equation correlations of the peak potentials of compounds (1a-h) for both oxidation and reduction processes. The equations of the regression lines obtained for the series (1a-h) are listed in Table 2. 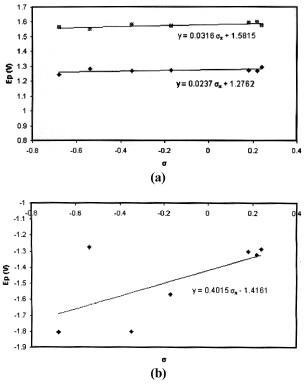 Fig. 2.Dependence of Ep (ox) of compound (1a-h) in AN on Hammett substitution constant (σ).

Table 2.The Hammett equations of the regression lines obtained for the series (1a-h) 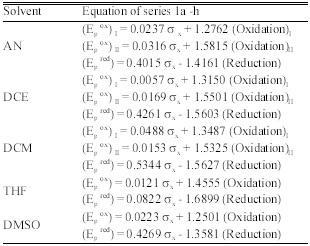 It is obvious from equations in Table 2 that the magnitude of the oxidation constant ρxox is smaller than that of the corresponding reduction constant ρxred. This indicates that the electroreduction is much more susceptible to substituent effect than electroxidation. This fact implies that, there is more significant resonance interaction between the substituent and the reduction center (C=O group) which is in good agreement with proposed reduction of adjacent C=O group, while the oxidation center (N=C group) is far away from the substituents.

To show the effect of solvent on the redox mode of the investigated compounds, the electrochemical characteristics of these compounds are extensively studied in 1,2-dichloroethane (DCE), dichloromethane (DCM), acetonitrile (AN), tetrahydrofuran (THF) and dimethylsulfoxide (DMSO) with 0.1 mol dm-3 tetra-n-butylammonium perchlorate as supporting electrolyte. The voltammetric data are listed in Table 1. As shown from the data and voltammograms (Fig. 1) compounds (1a-h) show that both oxidation and reduction of all the investigated compounds proceed identically in DCE, DCM and AN, they are oxidized in two irreversible one-electron transfer to the diradical cation which in turn undergoes a follow up chemical reaction with ring closure; and reduced in one or two-electron processes to the stable anion radical or to the full saturation of the (C=O) group according to the nature of the substituent (Scheme 1). The requirements for reversibility in the reduction process are satisfied, at least at low scan rates, in the three solvents for those compounds which undergo a reversible or quasireversible reduction. In THF and DMSO (Fig. 3) the oxidation and also the reduction proceed in one two electron wave. The radical or the anion - radical formed during the first electron lost or gained are unstable , therefore the second electron transfer followed immediately. Going from DCE to DMSO (increasing the donor number from 0.1 to 29.8)20, makes both the oxidation and reduction of these thiadiazoles easier. This behavior can be attributed to a solvation effect, as already reported by many workers20-22. Fig. 4, represents the relationship between ΔEp of compound 1d and the donor number of the solvents 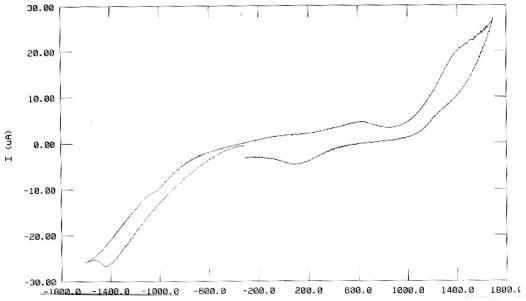 where TD represents the thiadiazole derivative, δΔGsolvis the differential Gibbs solvation energy, F, is the faraday constant and Epox - Epred = ΔEp is the difference between the oxidation and reduction peaks potential in the same solvent. According to the equation, when the solvent is change the sum of the solvation energies is greater if ΔEp is smaller. As can be seen in Table 1; ΔEp for all the investigated thiadiazoles (1a-h) decreased when the solvent changed from 1,2-dichloroethane to DMSO; i.e. the sum of the solvation energies increased which is full agreement with rhe results obtained for hydrazyl18-20. This is in accordance with Gutmann’s donor model20. In all cases there is a linear relationship between the electrochemical parameters (Ep, ΔEp and log k) and the donor number (Fig. 4). Accordingly, the sum of the solvation energies of a particular thiadiazole in a given solvent depend on the donor number of the solvent. This suggests that solvation process is mainly attributable to electrostatic interaction. It is possible that the unusual results for the oxidation and reduction of all the investigated thiadiazoles in THF is due to perturbation of the solvent by, for example, formation of an ion pair18,24,25. On the basis of substituent dependence it is expected that the oxidation potential will decrease, while the reduction potential will increase, when the substituent is less electronegative. Also, the solvation of the formed ion radical of two different substituted thiadiazoles in the same solvent can be expressed as follows according to the principle of the cyclic process22. 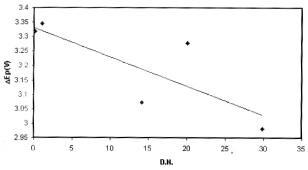 Fig. 4.Dependence of ΔEp of compound 1d on the donor number of the solvents.

Table 3.Difference in solvation energies of one thiadiazole ion radical in two different solvents at 25 ℃

This can only be applied if I(R) - EA(R) is a constant, where I is the ionization potential and EA is the electron affinity. Table 1 shows a regular increase in ΔEp for the compounds using different solvents. Taking in consideration the allowed experimental error. The increase follows the order:

This can be explained from the fact that the substitutents are far away from the oxidation center of the molecules and they only affect the reduction process, which is in full agreements with the proposed mechanism. Accordingly, if it is assumed that the difference in the ionization potentials are small, the change of the solvation energies of the different investigated compounds in different solvents which obtained listed in Table 3.