General – 120 plant materials were obtained from the Korean herbal medicine market in Chuncheon, South Korea and each specimen was deposited in the herbarium of College of Pharmacy, Kangwon National University. Each dried plant material (100 g) was soaked in 300 mL of 80% methanol aquous solution at room temperature for 7 days. After filtration, the methanolic filtrate was evaporated to dryness under vacuum. These extracts without further purification were used to study their effect on cytoxicity, lipid peroxidation and scavenging activity of free radical. Materials such as methyl alcohol, ethyl alcohol, acetaminophen, vitamin C (vit-C), low-density lipoprotein (LDL) and dimetyl sulfoxide (DMSO) were purchased from Sigma-Aldrich (MO, USA). Each specimen for free radical scavenging and antioxidation tests was dissolved in DMSO and final concentration of DMSO was adjusted to 1% (v/v) and the same amount of DMSO was used in the control experiment.

Cell culture method – The cell line used for this experiment was HepG2 cell (HB-8065™) purchased from ATCC and stored in a liquid nitrogen tank of College of Pharmacy, Kangwon National University. This cell was cultured according to the experimental purpose through frequent subcultures. For cell culture, MEM medium that contains 10% FBS, 1% L-glutamine, 1% penicillinstreptomycin. Most reagents used for cell culture were purchased from GIBCO (Life Technologies, CA, USA).

Ethanol-induced cytotoxicity and cytoprotective effect test – To evaluate cytotoxicity and cytoprotective effect, the cytotoxicity of ethanol in HepG2 cells was measured by using a microplate reader (Cole, 1986). 25,000 cells were put respectively in each well. After the culture in the medium 80~90 μl in a CO2 incubator for 24 hours, ethanol 10 μl or the mixture of ethanol 10 μl and plant extract 10 μl was added to make 100 μl in total. Final concentration of plant extract was 0.4% in the culture with 1.3% ethanol. After the culture for 20 hours, MTT reagent 15 μl was added. After the culture for 4 hours, the medium was removed. After dissolution in DMSO 200 μl, the absorbance was measured at 570 nm. Vitamin C and acetaminophen were used under the same condition as the substances for comparison of activities. The cytoprotective effect (%) of plant extract was calculated by substracting the viability (%) of control from the viability (%) of treatment.

Free radical scavenging assay – DPPH method was used to test free radical scavenging ability of a plant extract, and vitamin C was used as the substance for comparison of activities. DPPH (1,1-Diphenyl-2-picryl hydrazil) contains radicals in molecules, which make a stable complex in combination with other free radicals. After adding the test solution 2 ml of the prescribed concentration, which was made by dissolving the extract in DMSO, in DPPH 2 ml of final concentration 60 μmol, mixing it for 5 minutes and leaving it for 20 minutes, the absorbance was measured at 520 nm (Fugita et al., 1988). Final concentration of plant extract was 150 μg/ml, and vitamin C was 7.5 μg/ml in the reaction mixture.

Antioxidative effect test by oxidized LDL – Antioxidative effect of oxidized LDL generated by lipid peroxidation by using Thiobarbituric acid (TBA) method (Ohtka et al., 1979). In the test group, LDL (2 mg/ml) 10 μl, 150 mM sodium chloride 470 μl and 100 μM copper sulfate 10 μl were added in the test solution 10 μl, which was made of the plant extract of the prescribed concentration. vitamin C was used as the substance for comparison of activities. Final concentration of plant extract was 150 μg/ml, and vitamin C was 7.5 μg/ml in the reacting solution. In the negative control group, DMSO 10 μl was added instead of the test solution. In the blank test group, distilled water 10 μl was added instead of the test solution. All the above solutions were made to be 500 μl. The reacting solutions were mixed immediately with a vortex mixer and cultured in a 37 ℃ incubator for 3 hours. After putting each reacting solution 400 μl respectively in a 15 ml tube, stopping oxidation by dividing 4% BHT ethanol solution 25 μl, adding 10% phosphotungstic acid 500 μl and 0.7% thiobarbituric acid 250 μl dissolved in 0.5 M sulfuric acid, they were heated in a 95 ℃ water bath for 50 minutes. After cooling in running water, vortex for 5 minutes by putting n-butanol 500 μl and centrifugation at 4,000 rpm for 15 minutes, the supernatant was measured at 535 nm.

Statistics process – Most experiments were conducted 3 times, and a significance test was conducted for acquired data by using Student’s t-test. 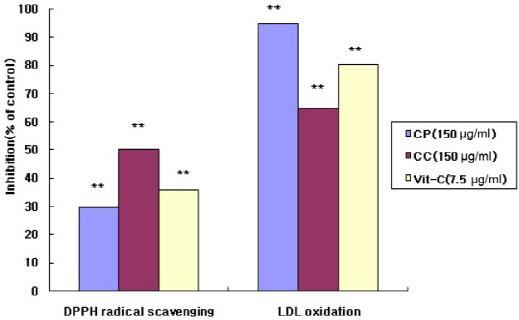 Ethanol is a chemical substance that induces fatty liver, liver cirrhosis or liver cancer in human bodies. Therefore, it is required to find a proper pharmaceutically active material that reduces ethanol-induced cytotoxicity in liver cells. This study aimed at finding Korean plant extracts that have protective effect on ethanol-induced cytotoxicity in liver cells.

Cytotoxicity of ethanol is related to acetaldehyde or ROS generated by catalystic activities of alcohol dehydrogenase and microsomal cytochrome P450 involved in the metabolism of ethanol [Arteel, 2003]. Alcohol, as a strong CYP2E1 inducing agent, generates superoxide radical and hydrogen peroxide in metabolic process, and is oxidized into acetaldehyde, generating free radicals (Arteel, 2008). These radicals causes lipid peroxidation and single strand breaks of DNAs along with various types of genetic toxicity including cytotoxicity and adduct formation (Navasumrit et al., 2001).

HepG2 cells used in this study are metabolizing cells subcultured in human liver cancer cells (Todaro, 1963; Westerink et al., 2007). Not quite sure but it is considered that the enhancement of ethanol-induced cytotoxicity in these cells was caused by the activities of plant extracts in liver cells, which caused the induction of CYP2E1 or the generation of active oxygen in metabolic process or otherwise by the inhibition of activation of antioxidant enzyme such as catalase and SOD of HepG2 cells.

Since long before, oriental societies where natural plants have been recoginized as relatively nontoxic components have used them as not only foods but also folk medicines and health functional foods. Indeed, there have been a lot of reports on the side effects of plants themselves or metabolites such as cytotoxicity in live cells (Bunchorntavakul et al., 2013). In the aspect of clinical medicine, it is reported that the intake of plant extracts such as Polygonum multiflorum induce hepatitis (Furukawa et al., 2010). In this study, Polygonum multiflorum was also a plant extract that strongly enhances ethanol-induced cytotoxicity by 74% (Table 1).

Oxidative stress generated by the metabolism of ethanol and the reduction of antioxidant defence mechanism may cause liver damage (Nordmann, 1992; French, 2001). Among antioxidants such as vitamin C, Trolox or BHT, vitamin C had more protective effect on H2O2-induced cytotoxicity in NIH3T3 and HepG2 cells as well as inhibitory effect on oxidative DNA damage (Kim et al., unpublished). Intraperitoneal administration of vitamin C and vitamin E in rats before administering ethanol had more inhibitory effect on free radicals and DNA strand breaks than the ethanol-only group (Navasumrit et al., 2000). Therefore, it is considered that high antioxidative plant extracts reduce alcohol-induced oxidative cytotoxicity by scavenging ROS generated in alcohol oxidation process or otherwise by enhancing the activation of antioxidant enzyme such as superoxide dismutase, catalase and glutathione peroxidase.

It is reported that medicinal plants or herbal and dietary supplements induce a spectral diversity of cytotoxicity in liver cells. Therefore, it is required to understand their toxicity risk and pathological physiology and evaluate safety of natural products that enhance ethanol-induced cytotoxicity. Therefore, we need to be careful to use plantoriginated extracts for cytological and medical purposes. This study has not resulted in detailed findings on plant extract's specific enhancing or reducing effect on ethanolinduced cytotoxicity.

We need to be careful with the use of plant extracts including those specified in this study such as Dimocarpus longan, Schisandra chinensis, Achyranthes japonica and Prunus mume for human bodies, especially, in case of oriental societies, with the intake of liqueur, which is made by maturing medicinal plants in ethanol, because of the toxicity of its congeners. In addition, it is also required to find natural substances such as Crataegus pinnatifida and Cinnamomum cassia that reduce ethanol-induced cytotoxicity in liver cells, investigate bioactive substances and derivatize them to develop cytoprotective substances.