Journal of the Korean Society of Surveying, Geodesy, Photogrammetry and Cartography (한국측량학회지)

China's Mapping Satellite-1, developed by the China Aerospace Science and Technology Corporation (CASC), was launched in three years ago. The data from Mapping Satellite-1 are able to use for efficient surveying and geometric mapping application field. In this paper, we fuse the panchromatic and multispectral images of Changchun area, which are obtained from the Mapping Satellite-1, the one that is the Chinese first transmission-type three-dimensional mapping satellite. The four traditional image fusion methods, which are HPF, Mod.IHS, Panshar and wavelet transform, were used to approach for effectively fusing Mapping Satellite-1 remote sensing data. Subsequently we assess the results with some commonly used methods, which are known a subjective qualitative evaluation and quantitative statistical analysis approach. Consequently, we found that the wavelet transform remote sensing image fusion is the optimal in the degree of distortion, the ability of performance of details and image information availability among four methods. To further understand the optimal methods to fuse Mapping Satellite-1 images, an additional study is necessary.

Modern remote sense technics tends to apply the highspectrum and high-resolution sensor. However, it is difficult to achieve both the high-spectrum data and high-resolution data of an image simultaneously. To enhance the effectiveness of the application of the remote sensing data, the multispectral data of a sensor or the various data provided by different sensors should be connected by data fusion, which improves the reliability and timeliness of the remote sensing data. In this paper, we perform the image fusion of images of level 1B obtained from Mapping Satellite-1 and evaluate the results.

Remote sensing image fusion is a technique based on advanced image processing multi-source remote sensing image. It chooses the optimal band combination and resolution based on the type and complexity of environmental conditions, designing the most appropriate phase superposition and combining the advantages of the various images or complementary by using a certain mathematical algorithm to generate the new image that the user needs (Weng, 2003) After the image fusion, not only the visual quality is improved, but also the fusion image has higher spectral and spatial resolution, effectively improving geometric accuracy, the image feature recognition accuracy, and the classification accuracy and providing a good basis for large-scale remote sensing applications research. At present, there are different image fusion methods in different common processing software. For example: ERDAS Imagine uses HPF (High-Pass Filter, High-pass filtering), Mod.HIS uses wavelet transformation, PCI uses Pansharp.

The basic principle of remote sensing image fusion by HPF method is relatively simple. For remote sensing image, high-frequency and low-frequency component contains the image of the spatial structure and spectral information, respectively. Thus the data fusion of low resolution/multispectral images and high resolution/full-color images can be achieved by getting the details of the structure of highresolution images through a high-pass filtering operator and using the method of combining pixels to superimpose the details on the low-resolution images (Chavez et al., 1991). Here is the specific fusion formula of HPF:

The advantage of HPF lies in the simplicity of algorithm, resulting in the amount of calculation is small, and no limits on band number. So the advantage of this method is that the fused image spatial resolution has been greatly improved and simultaneously the details of the multi-spectral image are fully maintained. But the fused image still contains a relatively large noise.

The colors of the image are usually expressed in two modes, which are three primary colored modes that contains red (R), green (G), blue (B) and colors three-attributes mode constituted by the brightness (Intensity), hue (Hue), and saturation (Saturation). The method of IHS is to separate three components that are the lightness of a color (I), hue (H) and saturation (S) from the RGB image with the transformation of the color images constituted by the red/green/blue and then to use isolated image brightness and high-resolution image data to perform simple placement or appropriate algorithm-calculation, receiving a component. Subsequently Separated replace the image brightness with the calculated component. Eventually inversely transform the replaced lightness (I'), hue (H') and saturation (S') three-component image the second time and generate the RGB data.

The entire process of IHS method can be expressed by the following formiujla(Tu et al., 2001):

In this formula δ = Pan - I0, I0 represents a luminosity component of low-resolution images. R0, G0, B0, v10 and v20 are the corresponding components of the original multispectral image after resampling, respectively. IHS method is simple and can enhance the saturation of the fusion results, thereby improving the color quality of the image and the ability to distinguish. But there is the color distortion. To solve this problem, many scholars put forward some suggestions for improvement IHS fusion method(Siddiqui, 2003).

Pansharp fusion method is based on the relationship between the gray value of the original multi-spectral image and the original panchromatic which is calculated by the least squares approximation method(Zhang, 2002). Adjustment of a single band of gray distribution can reduce the color deviation of the fusion results. Also, a series of statistical processing of the input of all bands can eliminate the dependence of the fusion results on the data and can improve the degree of automation of the process of integration.

The subjective qualitative evaluation and quantitative statistical analysis approach usually assess image fusion quality. Subjective qualitative evaluation relies on the human eye subjective assessment, which means according to the purpose of the application in the fused image the data that highlights the desired information is the best. And quantitative statistical analysis focuses on the mean, standard deviation, entropy, average gradient, correlation coefficient and the deviation index indicators of the fused image(Huang et al., 2013a, b).

Specific details are as follows:

(1) Mean of images: The mean is the average of the gray values, which is the average luminance of the human eye. The gray-scale value 128 can be regarded as a good visual effect. (2) Standard deviation: Standard deviation is often used as an important indicator to measure the amount of image information and it reflects the degree of dispersion that the gray values deviate from the image mean. It is an important parameter to measure the amount of information of an image. If the standard deviation of the image is large, the image gray level of dispersion increases, the image contrast is obvious and information contained is rich, and vice versa. (3) Information entropy: In accordance with the principles of the Shannon information theory that entropy values can reflect the amount of information on image fusion results. Entropy is an important indicator about whether the information of image is rich. The greater entropy of the fused image indicates that the images carry more information and the quality of fusion images is better. (4) Average gradient: Sensitively reflect the ability of the image to express the contrast on the minute details. Therefore it can be used to evaluate the clarity of the image. (5) Spectral correlation coefficient: Spectral correlation coefficient reflects the spectral characteristics similarity between the resulting images and the original multispectral images. (6) Spectral deviation index: Spectral deviation index is the degree the results maintain on the spectrum of high-resolution images. When the deviation index is low, the degree of deviation from the fusion image with the original multi-spectral image is small.

The principal objective of fusion in remote sensing is to obtain high-resolution multispectral images that can combine the spectral characteristic of the low-resolution multispectral images with the spatial information of the high-resolution panchromatic images(Denipote and Paiva, 2008). In this experiment step, the Image fusion results using Mapping Satellite-1 data were evaluated through visual effects and quantitative statistics, respectively. Changchun,the research area, is located the northeast of the China and is the capital and largest city of Jilin province. 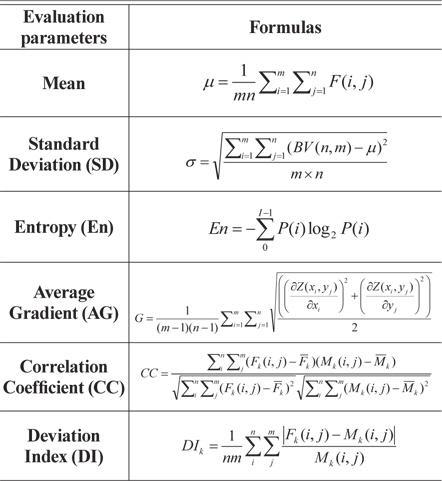 As is shown in Figure 1, it can be seen from the overall visual effect that the spatial resolution of the high-resolution multi-spectral images after fusion significantly improved, and the images are clearer and more easily identified than before. In terms of texture details, the contents of the image after fusion are richer than the original multispectral image texture, and clarity and spatial detail are greatly improved. The linear features such as land and house edge becomes apparent after fusion. The image processed by HPF performs well on texture detail; wavelet transform has loss on some texture details, because in the wavelet transform fusion process, some details of a high resolution image were lost. However, the images after wavelet transform fusion have higher image contrast, and can be identified more easily. 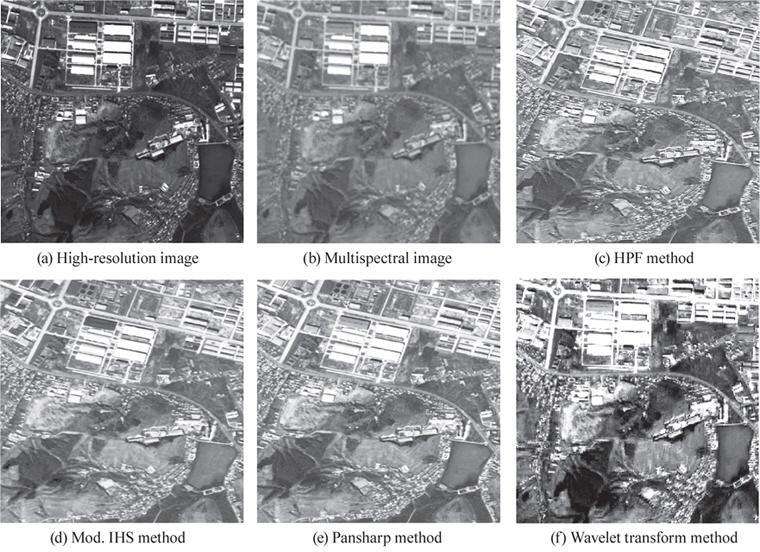 In terms of spectral characteristics, the spectral information of images after wavelet transform fusion are preserved best and the color is closest to the original multispectral images. The HPF and Pansharp perform second, the IHS proferms worst among the four methods.

Above all, images processed by wavelet transform have the best resolution and can be identified easily while the brightness and contrast of these images are also the best. So wavelet transform is the optimal method. Although the HPF performs best on details, the ability to maintain the spectral information of the images is weak, and IHS perform worst on details and maintenance of spectral information.

In this experiment, we use mean of images, standard deviation, information entropy and average gradient to evaluate the effect of the four methods on the improvement of the spatial information and the maintenance of spectral information. The results are as follows.

Table 3.The evaluation statistics of the fusion methods

According to quantitative statistical tables of the integration quality of image, the values, which include the average gradient, entropy and spectral correlation coefficient, of the images processed by the wavelet transform are the best among all four methods. And it means that compared with the other three methods, wavelet transform performs best on the degree of distortion, the ability of presentation of details and total amount of image information preserved. Thus we can conclude that wavelet transform method is the optimal method.

In this paper, we used four traditional fusion methods to fuse the panchromatic and multispectral images of Changchun, which is obtained from Mapping Satellite-1, the one that is the Chinese first transmission-type threedimensional mapping satellite. Through the comparison on the results, we found the most optimal method. Because of the richness and complicity of data as well as the purpose, there are still many problems. Every method has its own advantage and disadvantage. This paper shows that the wavelet transform is the best on the correlation coefficient, the average gradient and information entropy. But its performance on local texture detail is poor. So for the multisource remote sense data fusion, we should consider the purpose and regional characteristics of image features. To further understand the optimal methods to fuse Mapping Satellite-1 images, an additional study is necessary.