As environmentally friendly energy takes center stage, interests for Electric Vehicles/Plug in Hybrid Electric Vehicles (EVs/PHEVs) are getting increase. With this trend, there is no doubt EVs will take large portion to penetrations of total cars. Therefore, accurate EV modeling is required. Battery is one of the main components with the power system view of aspect. Hence, in this paper, reviews and discussions of some types of batteries for EV are contained by considering energy density and weight of the batteries. In addition, simulations of Li-Ion battery are accomplished with various variables such as temperature, capacity fading and charge/discharge current. It is confirmed that temperature is the main factor of capacity fading. Validation of the modeled battery is also conducted by comparing it with commercialized battery.

These days most of countries and companies focus on eco-friendly growth. With this circumstance, Electric Vehicles (EVs) take center stage. EVs can reduce the amount of consumption of fuel fossil, and thus, it can reduce the amount of CO2 emission. However, this is not the only reason why the interests about EVs are growing. EVs can operate as distributed generation as well. That is to say, it can operate as power system device for compensating insufficient power or for SMART GRID. For these reasons, therefore, it is clear that EVs will take large portion of total complement of car. In this state of affairs, analyses of effect on distribution system with EVs are essential. And accurate battery modeling should be considered as first priority for the analyses.

Since future studies of this paper are analyzing the effects on grid when EVs are connected, EMTP/ATPDraw which is one of the widely used programs for analyzing transient phenomena is used. However, there is no such battery model in that program. Hence modeling of battery with EMTP/ATPDraw is conducted in this paper.

There are some types of battery modeling, specifically: experimental, circuit-based and mathematical. Experimental modeling and circuit-based modeling cannot estimate State-of-Charge (SoC). However, estimations of SoC are very important part of battery modeling. Hence, mathematical modeling is used in this paper. This paper is divided into four main parts. In the section 2, brief introductions of batteries are contained. And battery for modeling in this paper is selected based on section 2. In the section 3, theoretical backgrounds of battery modeling are presented. The section 4 contains simulation result of modeled battery with various aspects such as internal resistance, charging/discharging current and capacity fading. And it is verified in section 5. This paper ends with conclusion in the last section.

There are some types of batteries for EV such as Lead-Acid, Lithium-Ion, Nickel-Cadmium and Nickel-Metal-Hydride. To model battery, selection of battery is one of the most crucial factors that have to be considered. Brief characteristics of each type of batteries are indicated in Table 1 [1-5].

However the first priority considering EV is how long EV can drive with the battery. Therefore, weight and energy density of the battery should be considered first. Brief data of weights and costs of batteries are summarized in Table 2 [6].

Table 2.Weights and costs of batteries those are applicable to electric vehicles

MODELS in ATP is a general-purpose description language supported by an extensive set of simulation tools for the representation and study of time-variant systems [8]. The MODELS provides the monitoring and controllability of power system as well as some other algebraic and relational operations for programming. With some compromised functions such as repetition, conditional path selection, and user defined functions, it is also called a new TACS [9].

As stated, there is no doubt that EV will be brought out. However, without analyses for possible effect on power system, it cannot be commercialized. In this paper, EMTP/ ATPDraw which has advantages of analyzing transient phenomenon is used. As mentioned, however, there is no battery model with the program. Thus, modeling of battery with the program is indispensable not only analyzing battery itself but also analyzing the effects on grid when EVs are connected.

The main disadvantage of this model is all components in this equivalent circuit are assumed to be constant. However, it varies depending on the conditions of battery [11]. Furthermore, circuit-based models including thevenin model do not take account of SoC.

In 1965, Shepherd [12] suggested battery model mathematically, as in (1). It describes electrochemical behavior of the battery directly [13].

Current is used in Coulomb Counting Method (CCM). TCurrent is used in Coulomb Counting Method (CCM). The unit of the energy in the electric charge is coulombs and that is equal to the integration of overtime-current. Therefore, from this point, the remaining capacity in the battery can be calculated by measuring the current which is flowing into or leaving from the battery. To calculate accurate SoC in CCM, self-discharge current and columbic efficiency should be taken into account. But still it is useful and is making acceptably accurate result. So, in this paper, CCM is used with ignoring self-discharge current and columbic efficiency. Calculation of SoC using CCM is following (10)~(11).

“Capacity fading” is one of the main characteristics of battery. Capacity fading refers to the phenomenon that usable capacity of the battery decreases due to run-time, temperature and charging/discharging cycle. Generally, it is considered that the battery is available until it has 80% of its initial capacity. Hence, with this, consideration for the effect of capacity fading is important factor in battery modeling [17].

There are three main reasons causing capacity fading which are temperature, time and cycle of the battery. In (12), capacity loss by temperature and time is expressed [18].

In (13), capacity fading due to cycle is expressed as similar as (12). The number of cycles is converted to Ah-processed (IPR), the integral of absolute value of current over time [21]. Ah-variable represents the amount of charge transported during cycling. Advantage of using Ahprocess is allowances for quantifying and correlating the capacity fading behaviors with different C-rates [20].

4. Modeling of the Battery using EMTP/ATPDRAW

As stated, CCM is used in this paper. The equations for calculation are following (10)~(11).

In this paper, battery capacity Q is set at 2.3Ah. And it is assumed that the modeled battery has negative current when it is charged, on the other hand, has positive current when it is discharged. According to the equations, SoC should have linear characteristic if the battery current set as constant. Therefore, as the battery current increase, the time which SoC is reached to 1 will be shorten. 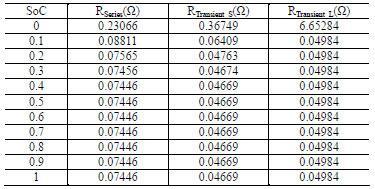 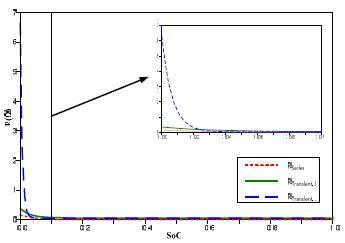 As shown in Table 3 and Fig. 2, using (5), (6) and (8), internal resistances can be calculated and it rapidly fluctuates with SoC while SoC increases from 0 to 0.1. And it is gradually changed until it reaches each of their minimum values. This implies most of power losses are occurred when charging or discharging of the battery begins or ends, respectively.

For charging mode, it is assumed that No-load is connected. This means, in this simulation, only Voc is concerned. Simulation is conducted using (4) and simulation result is shown in Fig. 3. 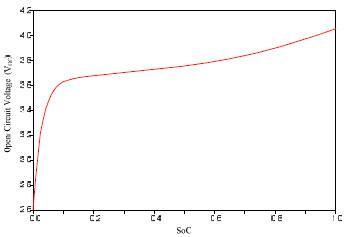 Fig. 3.Simulation result of Voc when the battery is charged

In this simulation, battery capacity is set at 2.3Ah and charging current is set at 1A as constant value.

Generally, Open-Circuit Voltage Voc sharply changes when charging is started. In other words, when SoC is roughly between 0 to 0.2, Voc rapidly changes. And it gradually changes as SoC is reached to 1. This tendency is indicated in Fig. 3. It is noticed Voc starts at 2.6V and reaches at 4.1V in Fig. 3. That is to say, cut-off voltage and nominal voltage of modeled battery is 2.6V and 4.1 V, respectively. 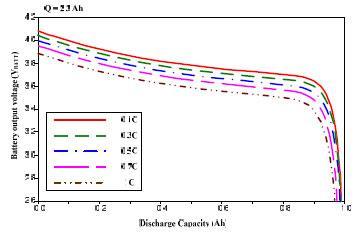 Effect of capacity fading can be analyzed by (12) which is based on Arrhenius equation. In this simulation, irreversible capacity loss according to time is analyzed with three different temperatures.

Theoretically, as temperature higher, chemical reactions in battery are become faster. For this reason, the performance of battery can provide better performance, however, at the same time, it causes extra power loss. In other words, high temperature causes reduction of the battery life. As a rule of thumb, reaction rate of the battery is become doubles as the temperature of battery increase 10 ℃. For instance, if specific battery can be used in an hour at 30℃, it can be used in two hours at 20℃.

Time is also one of the main factors causing capacity fading. As mentioned previously, battery makes output voltage using chemical reaction. However, although users do not use the battery, it does not mean its chemical reactions stop either. Thus, as time goes by, the battery life is kept reducing.

For the reasons above, it is expected that life reduction or capacity loss of the battery becomes larger as temperature and time increase.

Table 4.Power loss due to time and temperature 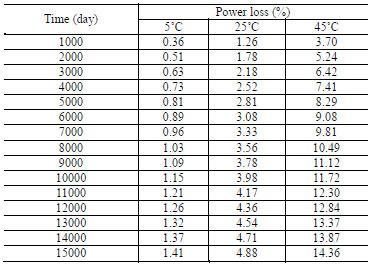 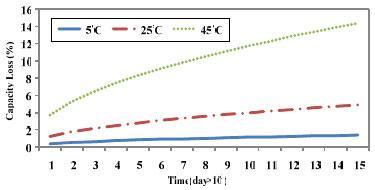 As charging/discharging repeated, irreversible capacity loss is occurred as well and it is called “cycling fading”. Simulation results of capacity loss due to cycling are presented in Table 5 and Fig. 6.

Table 5.Power loss due to cycle number and temperature 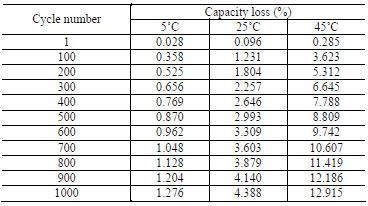 Fig. 6.Simulation results of capacity loss due to charging/discharging cycle (conducted with 1C)

In this simulation, 1C is used and it is shown that capacity losses by cycling are significantly worse when it is conducted in high temperature. Percentage capacity loss is 1.537% at 5℃. On the other hand, it causes 15.552% of capacity loss at 45℃.

Capacity fading by temperature, time and cycle, by the way, cannot be separated. Therefore, it should be considered at once. Simulation results considering those three variables are shown in Fig. 7. 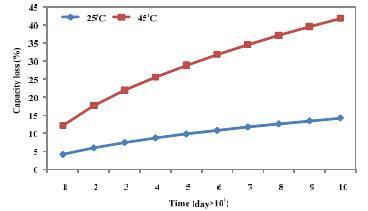 This simulation is conducted with 25℃ and 45℃, and assumed charging/discharging cycle is implemented one time per day. As shown in Fig. 7, it causes about 14 and 41 percent of power loss at 25℃ and 45℃, respectively. It suggests that temperature is the most crucial factor affect power loss of the battery.

Comparisons between modeled battery and commercialized battery “ANR26650” are presented in Fig. 8 ~ Fig. 10. In these comparisons, capacity of modeled battery Q is set at 2.3Ah and discharge current is provided sequentially. 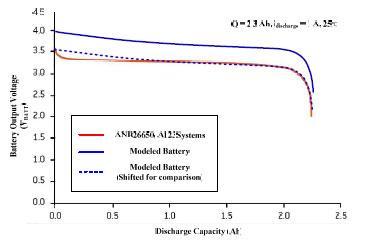 Fig. 8.Comparison of battery output voltage in modeled battery and commercialized battery at 25℃

Fig. 9.Comparison of capacity loss by cycling in modeled battery and commercialized battery at 25℃ 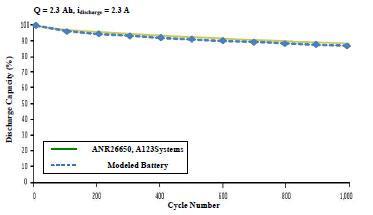 Fig. 10.Comparison of battery output voltage in modeled battery and commercialized battery at 45℃

Owing to the difference in open-circuit voltage, modelled battery and ANR26650 have not exactly same result, however, those two batteries have considerably similar pattern, as shown in Fig. 8. And analogousness of capacity loss by cycling is also shown in Fig. 9 and Fig. 10.

Since the battery for EV should have high energy density and low weight, Li-Ion battery is chosen for this paper. And mathematical battery model is used because of some explained disadvantages of circuit-based model and experimental model. It is introduced that the three main factors for battery modeling are SoC, internal resistances and capacity fading. With mathematical modeling, SoC and varying internal resistances are taken into account. And it is shown that capacity fading can be caused by temperature, time and cycling. The higher temperature batteries have the more power losses it gets. Likewise, the longer time and larger cycle numbers cause more power losses on battery. Therefore, it can lead reduction of battery life as presented in simulated results. Especially, it is shown that temperature is the most crucial factor among stated variables.

Without sufficient researches of possible effect caused by connected EVs in power system, it is impossible to employ EV technologies. Especially, transient phenomena on power system are more likely to be affected by EVs. Therefore, for analyzing battery characteristics and the effects on grid when EVs are connected are mainly discussed. To be specific, EMTP/ATPDraw which is one of the most appropriate programs for analyzing transient phenomena and simulations on power systems is used for that.

However, despite its advantages in analyzing power system such as transient phenomena, EMTP/ATPDraw does not have any battery models. Hence, modeling battery using EMTP/ATPDraw is worth conducting. So with verified battery in this paper, it is expected that the effects on grid when EVs are connected will be researched for further studies