Chemotherapeutic therapy for cancer is often associated with adverse effects. In the past, chemotherapeutic agents have been selected on the basis of cytotoxicity against cancer cell lines in vitro and in vivo, not on the basis of sophisticated intervention in tumor specific biology. Those cancer drugs, which have toxicity toward tumor cells, share same toxicity with normal cells and tissues.1 In this adverse effect, chemotherapeutic agents often have gastrointestinal mucosal lesions and hemorrhage, because gastrointestinal mucosal cells are among the most sensitive cells. These often lead to potentially lifethreatening hemorrhage and perforation.2 Because of these, and pathological effects on other organ systems, there has been great interest in developing concomitant therapy which will protect normal tissue from the effects of chemotherapeutic agents without interfering with their anti-cancer activity.

Rice, and in particular bran rice, contains compounds like tocopherols, tocotrienols, anthocyanins, polyphenols, γ-oryzanol, enzymes, polyunsaturated fatty acids and resistant starch,3,4 which have shown positive effects as modulators of blood pressure, glycemia or serum cholesterol levels.5,6 It may also contain antioxidants that could help in the prevention of tumoral proliferation,7,8 and even nutraceutical prebiotics that could help control colitis by modification of the colonic microbiota.9,10

Microorganism and inocula − Lactobacillus plantarum NCIMB 8826, originally isolated from human intestine, was used for the fermentation of all rice broths. The strain was maintained at 4 ℃ and subcultured monthly on MRS agar slants (Oxoid Ltd, Cambridge, UK). Colonies isolated from MRS agar plates were precultured twice in MRS liquid broth at 37 ℃, first for 24 hours and then for 18 hours, to ensure that all the cells were harvested from the early stationary phase. The bacterial suspensions were then used to inoculate the rice media at 1% (by volume). In all cases, the initial microbial concentration was approx. 7.5 log CFU/mL.11

Fermentation procedures − Bran was isolated by standard milling process, heat stabilized at 110 ℃ for 5 minutes, and stored at −20 ℃. Shake flask fermentations were performed in duplicate using 500 mL screw-capped glass bottles with 400 mL of medium. Suspensions (3%, by mass per volume) in distilled water were made from the heat stabilized rice bran. The resulting slurry was then autoclaved (15 minutes, 121 ℃) to sterilize the media and to gelatinize the rice bran. Culture media were inoculated and incubated at 150 rpm and 37 ℃ for 48 hours. Fermented product was centrifuged (5,000 g, 10 minutes, 4 ℃) and dried on freezer drier, and stored at –20 ℃ for chemical and biological test.11

Chemoprotective assay on rat model − Adult male Sprague-Dawley rats (Daehan Laboratory Animals, Korea), weighing 200 - 250 g, were used in all experiments. All animals were maintained at a temperature of 20 ℃ to 23 ℃, and given food (Purina rodent chow, Korea) and water ad libitum. Animals were selected for test based on body weights and randomly assigned (10 rats/group) to each of the following five groups; control, doxorubicin 10mg/kg alone, non-fermented rice bran 100 mg/kg alone, fermented rice bran 100 mg/kg alone, doxorubicin 10 mg/kg plus non-fermented rice bran 100mg/kg and doxorubicin 10 mg/kg plus fermented rice bran 100 mg/kg. All rice brans were administered at one time per day for 5 days by oral. Doxorubicin was treated by intraperitoneal injection at one time per day for 5 days. All groups of rats were observed for signs of gross toxicity and/or behavioral changes daily for 20 days. Consistency of feces was monitored throughout the study. Body weights were recorded on days 0, 5, 10, 15 and 20. On day 20, all animals were euthanized by CO2 inhalation and necropsied. Gross appearances of major organs of the thoracic and abdominal cavities were evaluated and the presence of gastrointestinal damage was noted.12

Monosaccharide analysis by HPAEC-PAD − The monosaccharide analysis of TFA-hydrolyzed rice bran was performed by HPAEC (High Performance Anion-Exchange Chromatography) using BioLC (DX 500 Chromatography System, Dionex Co., USA) equipped with pulsed amperometric detector (ED 50, Dionex Co., USA). The dried sample was dissolved in 0.1 ml of dH2O and filtered through microspin filters (0.45 μm, PGC Scientifics, Frederick, MD). After the filtration, 20 μL of the sample were injected and fractionated on a CarboPac PA-1 column (4 × 250 mm, Dionex Co., USA) which was preequilibrated with 100 mM NaOH and eluted in an isocratic mode at a rate of 1 ml/min. Arabinose, galactose, glucose and xylose (Sigma Co. St Luis, USA) were used as standard monosaccharides. All the reagents used for rice bran extraction and carbohydrate analysis were of ACS grade.13 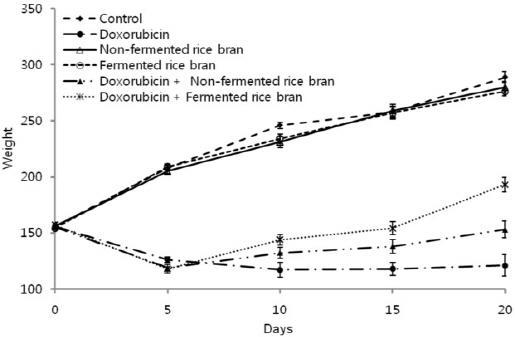 Fig. 1.Effect of fermented and non-fermented rice bran on loss of body weight induced by doxorubicin. Values are expressed as mean ± SD (n = 10).

Two different rice bran, which were fermented and non-fermented rice bran, were shown in this study to protect rats given an acutely toxic dose of doxorubicin. The endpoints chosen for evaluation were prevention of the effects of these samples on body weight, stool consistency, gross pathology of the gastrointestinal tract and mortality. Significant protection was observed on body weight. Protection against gastrointestinal mucosal lesions and diarrhea were also observed, as was a decreased mortality due to doxorubicin, even if it is not clear from this study whether this was due to increased food intake or prevention of the catabolic effects of the chemotherapeutic agent. Fermented rice bran appeared to be more effective than non-fermented thing according to experimental data such as body weight, death, gross gastrointestinal pathology and diarrhea. It is assumed that it came from the change of monosaccharide by fermentation, specifically increased the concentration of xylose, which is one of the major components form hemicelluloses and arabinoxylan. It is assumed that rice bran was changed to active form that appears to prevent the toxicity by fermentation.

Doxorubicin produces well-documented pathology when used as chemotherapy for malignant diseases.14 Severe cardiac and renal pathology are common. This study was not designed to evaluate these adverse effects since the dose of doxorubicin was not sufficient to produce significant pathologic changes in the liver. However, there were signs of gross pathology when gastrointestinal mucosa was evaluated. The mechanism by which rice bran protects against the toxicity of doxorubicin is unknown. Rice bran has been reported to have a chemopreventive effect,15 and to increase NO production, cytokines and radio-protection relating to immunestimulation.16,17

There is still a great need for non-toxic agents that have significant protective effect against chemotherapy induced adverse effects.1 Further study on the mechanism is needed. In conclusion, rice bran, specifically fermented rice bran by Lactobacillus plantarum, appears to be effective in protection against some of the disturbing side effects produced by doxorubicin and may be valuable in improving quality of life in patients receiving chemotherapy. Fermented rice bran may prove to be useful as an adjunct to cancer thermotherapy.