Journal of Microbiology and Biotechnology

Herboxidiene is structurally characterized by the tetrahydropyran acetic acid moiety and a side chain including a conjugated diene [6]. Herboxidiene activates the synthesis of low-density lipoprotein (LDL) receptor by up-regulating the gene expression of the LDL receptor, which effectively reduces plasma cholesterol [12], and exhibits strong cytotoxic activity by up-regulating luciferase receptor gene expression as well as inducing both G1 and G2/M arrest in the WI-38 human tumor cell line [24,8]. Recently, the 53 kb biosynthesis gene cluster for herboxidiene was analyzed by genome sequencing and gene inactivation [27]. As herboxidiene bioactivity was found to be high against several herbs, a human tumor cell line, and cholesterol, the chemical syntheses of herboxidiene and analogs have been explored [4,7,18,23,31]. The major problem associated with the industrial production of herboxidiene is its high production cost. Thus, taking into consideration of previous evidence on the production of teicoplanin in Actinoplanes teichomyceticus [21] and clavulanic acid in Streptomyces clavuligerus [13], the effect of glycerol on herboxidiene production was assessed. It is presumable that biosynthesis of herboxidiene production can be prolonged by supplementation of glycerol in the medium, as acetyl-CoA is the starter unit of herboxidiene and further extended as a fatty acyl chain via malonyl-CoA-which can use glyceraldehyde-3-phosphate as the precursor.

In the era of molecular microbiology and recombinant DNA technology, it is easy to alter the metabolic flux distribution of different precursors, which can be another target in product enhancement. Acetyl-CoA carboxylase is as example used for enhanced production of actinorhodin and flaviolin via modified precursor supplies [16]. The positive regulator S-adenosylmethionine synthetase (MetK) and a global regulatory gene, afsR, can enhance secondary metabolites by heterologous expression. The effect of S-adenosylmethionine synthetase (MetK) on the production of secondary metabolites from different Streptomyces species has been previously reported [11,14,15,19,29,32]. Another regulatory protein (afsR), which is a pleiotropic global regulator, controls the production of multiple secondary metabolites production in Streptomyces [9,26]. The overexpression of afsR-sp in Streptomyces lividans, S. clavuligerus, S. griseus, and S. venezuelae leads to overproduction of actinorhodin, clavulanic acid, streptomycin, and pikromycin, respectively [15,20]. Here, efforts were made to analyze the effect of glycerol and develop recombinants for the enhancement of herboxidiene production. To this end, cell mass, pH, and herboxidiene production were evaluated.

Escherichia coli XL1-Blue (MRF) (Stratagene, USA) was used for DNA amplification and E. coli JM110 was used to propagate non-methylated DNA. E. coli strains were grown at 37℃ in Luria–Bertani medium in both liquid broth and agar plates supplemented with the appropriate antibiotics when necessary (100 µg/ml ampicillin and 100 µg/ml apramycin). Standard methods were used for DNA cloning, plasmid isolation, and restriction enzyme digestion [25]. S. chromofuscus was cultured for seed, and transformation of recombinant plasmids in ISP medium 2 and on R2YE plate, respectively. For the production, 5% seed of S. chromofuscus wild strain or each transformants was inoculated into a baffled 500 ml flask containing 50 ml of the production medium No. 6A6 and grown at 28℃ on a rotatory shaker at 235 rpm for 8 days. The bacterial strains and plasmids used in this study are listed in Table 1.

Table 1.Strains and plasmids used in this study.

Table 2.Sources used for the production of herboxidiene. 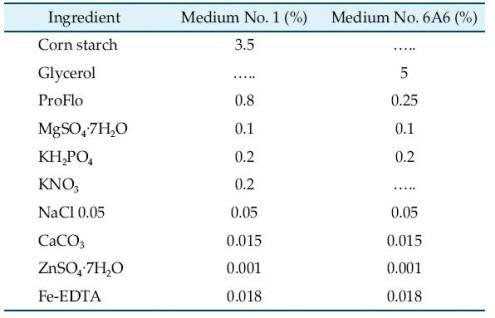 To analyze the production of herboxidiene, 0.15 L of medium No. 6A6 was inoculated with 0.0045 g/l of 36-h-old mycelia in 2 L Erlenmeyer flasks. After 24 h of incubation, the cell pellets were collected at 24 h intervals by centrifuging 10 ml of culture broth at 3,000 rpm for 15 min. The supernatants obtained after removing the cell pellets were used to study the change in pH. The cell pellets were collected, washed with deionized water, and centrifuged twice. They were then placed at 80℃ until their mass was constant to analyze the growth rate of Streptomyces chromofuscus, which was employed to prove the effectiveness of feeding glycerol and nitrogen to determine the best feeding time. Feeding experiments were carried out at 24, 36, and at 48 h of batch culture of Streptomyces chromofuscus (Table 3). Fermentation products were centrifuged and filtered through Whatman filter paper. The resulting ethyl acetate extracts were concentrated by a Rota-vapor and resuspended in methanol. Samples were analyzed by TLC, using chloroform:methanol in a ratio of 9:1. The Rf value, as determined by ultraviolet (UV) and p-anisaldehyde reaction, was 0.44 [17]. Finally, samples were analyzed by HPLC using a reverse phase C18 column (4.6 × 250 mm, 50 µm; KANTO Reagents, Japan) with a solvent system consisting of 0.05% trifluoroacetic acid and 100% acetonitrile with a flow rate of 1 ml/min (Rt 28 min) in the binary condition.

The product analysis was carried out in optimized medium No. 6A6 (Table 2). To confirm the enhanced product, HPLC, ESI-QTOF mass, 1H-NMR, and 13C-NMR analyses were performed.

For the purpose of enhancement, glycerol was selected as the carbon source and another three different carbon sources were selected for analysis to verify the superiority of glycerol over the carbon sources used: glycerol 3.5% (0.58 g/l), corn starch 3.5% (0.055 g/l), maltose 3.5% (0.037 g/l), and sucrose 3.5% (0.027 g/l). Previously, ProFlo was favored as the nitrogen source for herboxidiene production. Hence, to assess the efficacious effect of nitrogen sources in combination with glycerol for enhancement of herboxidiene, ProFlo along with three other nitrogen sources were evaluated with 3.5% glycerol: ProFlo 0.8% (0.58 g/l) peptone 0.8% (0.3 g/l), tryptone 0.8% (0.2 g/l), and soybean flour 0.8% (0.38 g/l). The next stage involved the selection of minerals; among different mineral components in medium No. 1 [17], KNO3 was excluded and the effect was significant (0.59 g/l without KNO3). Finally, after verification of the efficacious effect of glycerol at various levels with different levels of nitrogen source (ProFlo), and exclusion of mineral (KNO3), the new production medium was designated as medium No. 6A6 (Table 2).

To investigate a suitable time for feeding in medium No. 6A6, a calibration curve between dry weight mycelia and the pH was plotted (Fig. 2). As a result, feeding experiments were carried out at 24, 36, and 48 h in medium No. 6A6 with neutral pH into the shaking flask at different fermentation times (Table 3). Samples were withdrawn from each flask and analyzed by HPLC (Table 3). The results presented in Table 3 indicate that it was better to feed glycerol:ProFlo (2.5%:0.125%) from 24 h to 48 h, with 36 h being optimal.

Table 4.Enhancement of herboxidiene production in medium No.6 A6 by metabolic engineering. 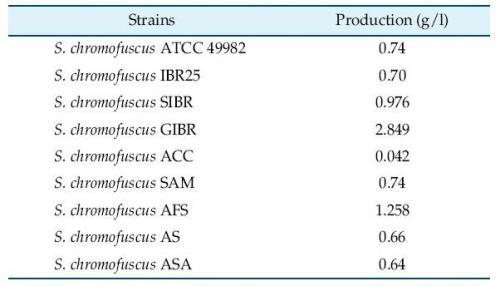 We also tried to enhance the carbon flux through acetyl-CoA to malonyl-CoA. The genes encoding the ACCase subunits, accA2, accB, and accE, were cloned in an integration vector under the control of the strong promoter ermE* to generate pACC152. Introduction of pACC152 into Streptomyces chromofuscus did not significantly enhance the production of herboxidiene (Table 4).

Streptomyces chromofuscus ATCC 49982 produces herboxidiene, which is a polyketide natural product with important applications that include herbicide, and the treatment of cancer, infectious diseases, and cardiovascular diseases. Industrially, herboxidiene is the most important polyketide. To improve the production of herboxidiene, we focused on implication of glycerol as the carbon source, the feeding process, and metabolic engineering. In previous studies on the effect of glycerol, it was observed that the production of teicoplanin and clavulanic acid in Actinoplanes teichomyceticus and Streptomyces clavuligerus was significantly increased [21,13]; thus, the effect of glycerol on herboxidiene production was assessed. It is presumable that biosynthesis of herboxidiene production can be prolonged by supplementation of glycerol in medium, as acetyl-CoA is the starter unit of herboxidiene and this is further extended as a fatty acyl chain via malonyl-CoA, which can use glyceraldehyde-3-phosphate as the precursor (Fig. 1). Another possibility is that glycerol supports the development of cell mass, which is then followed by herboxidiene production. Previously, production was reported to be 0.0549 g/l herboxidiene [17], which is very little and comes with a high production cost in terms of the industrial scale. For the same purpose, glycerol was selected as the carbon source and another three different carbon sources were selected for analysis to verify the superiority of glycerol over the carbon sources. Previously, ProFlo was favored as the nitrogen source for herboxidiene production. ProFlo is the sole source of different amino acids, which may be partially involved in the formation of acetyl-CoA, the precursor for herboxidiene biosynthesis. The next stage involved the selection of minerals to improve the efficacious effect of glycerol on herboxidiene production. Potassium is required in carbohydrate metabolism, phosphate is a key element in the regulation of cell metabolism present in nucleic acid, sulfur and magnesium are cofactors for enzymes, iron plays a regulatory role in the fermentation process, and other minerals like salt, calcium, and zinc are necessary. KNO3 is an inorganic nitrogen source, based on the knowledge that inorganic nitrogen sources such as nitrates, nitrite, and several ammonium salts can sometimes restrict antibiotic production [1]. A calibration curve between dry weight mycelia and the pH was plotted (Fig. 2). With a large concentration of mycelia, little pH difference in the calibration curve was evident during the lag phase (Fig. 2). As a result, feeding experiments were carried out at 24, 36, and 48 h in medium No. 6A6. The results presented in Table 3 indicate that it was better to feed from 24 h to 48 h, with 36 h being optimal; for this, there are several possible explanations. The large increase of cell mass (Fig. 3) and the feeding of ProFlo or glycerol:ProFlo can lower the pH of the fermentation broth. The low pH might be more suitable for herboxidiene production (Fig. 2). Moreover, it is better to feed the ProFlo or glycerol:ProFlo in the neutral or sub-acid pH condition. Thus, ProFlo or glycerol:ProFlo could be used for the production of herboxidiene. Finally, we approached metabolic engineering for further enhancement of herboxidiene production. Introduction of pSAM152 and pSIBR into S. chromofuscus generated S. chromofuscus SAM and S. chromofuscus SIBR, respectively, which play an important role in the conversion of ATP and L-methionine to S-adenosyl-L-methionine (SAM), and may act as a methyl donor for the transmethylation reaction in the herboxidiene, as the gene cluster includes methyltransferases (herF) that enable herboxidiene efflux and therefore produce a higher amount in production medium No. 6A6. Introduction of pAFS152 and pGIBR into S. chromofuscus generated S. chromofuscus AFS and S. chromofuscus GIBR, respectively, which may play the major role in regulation of genes involved in production of herboxidiene, as it is a global regulator gene in production medium No. 6A6 . We also tried to enhance the carbon flux through acetyl-CoA to malonyl-CoA. The accA2, accB, and accE genes encoding the ACCase subunits were cloned in an integration vector under the control of the strong promoter ermE* to generate pACC152. Introduction of pACC152 into S. chromofuscus did not significantly enhance the production of herboxidiene. Similarly, to assess the combined effect of ACCase, metK1-sp, and afsR-sp, the construct pASA152 that incorporated all three genes was applied, and to assess the combined effect of afsR-sp and metK1-sp, the construct pASA152 that incorporated both genes was also applied. The recombinant strains S. chromofuscus ASA and S. chromofuscus AS were obtained by introducing pASA152 and pAS152 into S. chromofuscus, respectively. However, there were no significant changes. This observation indicates that enhancement of the carbon flux does not have an influential role for enhancement of herboxidiene in production medium 6A6. On the basis of these results, we conclude that the increased production of herboxidiene is due to the increased pool of biosynthetic precursors, which could be harnessed for the feasible and cost-effective production of herboxidiene at the industrial scale. 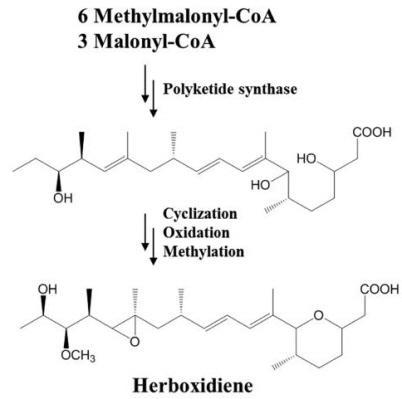 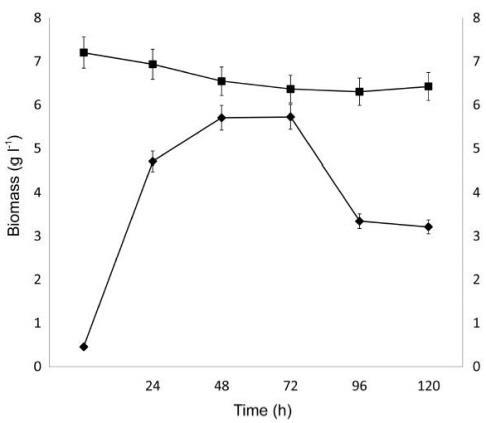 Fig. 2.Time course profiles of biomass and pH, after 24 h of batch fermentation of S. chromofuscus, the cell pellets were collected at 24 h intervals until 5 days to measure mass (◆) and pH (■). 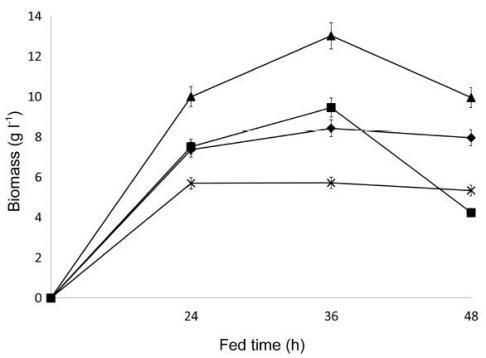 Fig. 3.Time-course profiles of biomass, after 24 h of fed-batch fermentation of Streptomyces chromofuscus. The cell pellets were collected to measure the mass from media No. 6A6 (×) and No. 6A6 fed with ProFlo (◆), glycerol (■), and glycerol:ProFlo (▲) at 24, 36, and 48 h, respectively.