In the course of screening for antioxidant compounds from natural plants in Korea by measuring the radical scavenging effect, a methanol extract of the flower buds of Daphne genkwa S. et Z. (Thymelaeaceae) was found to show a potent antioxidant activity. Subsequent activity-guided fractionation of methanol extract of D. genkwa led to the isolation of four compounds from the ethyl acetate soluble fraction. The chemical structures were elucidated as genkwanin (1), 3'-hydroxygenkwanin (2), apigenin (3), and tiliroside (4) by spectroscopic techniques. Among them, compound 2 showed the significant anti-oxidative effect on DPPH. And compound 2 showed the significant riboflavin-and xanthine-originated superoxide quenching activities. To verify the antioxidant enzymatic activities of compound 2, the SOD enzymatic activity was measured spectrophtometrically using prepared Caenorhabditis elegans homogenates. The results showed that compound 2 was able to elevate SOD activity of C. elegans in a dose dependent manner. Moreover, compound 2 decreased the intracellular ROS accumulation of worms.

Reactive oxygen species (ROS) and reactive nitrogen species (RNS) are well known to damage cellular biomolecules such as DNA, proteins, amines, lipids, and carbohydrates, resulting in ageing and other degenerative diseases like cancers, diabetes, Alzheimer’s disease and Parkinson’s disease.1-3 Antioxidants are considered as possible protection agents reducing oxidative damage of human body from the ROS and retard the progress of many chronic diseases. Therefore, there are a lot of ongoing researches on such substances for their potential usefulness as dietary supplements to care the radicals related disorders.4

Daphne genkwa S. et Z. (Thymelaeaceae) is a toxic shrub widespread in Korea and China. The flower buds of D. genkwa are used as a traditional folk medicine for purgative, diuretic, antitussive, and antileukemic purposes.6 Previous studies of the genus Daphne have shown the presence of flavonoids, and diterpenoids.7-15 In order to find the antioxidant compounds from the flower buds of D. genkwa by measuring the radical scavenging effect on 1,1-diphenyl-2-picrylhydrazyl (DPPH), the activity-guided chromatographies of methanol extract of D. genkwa were carried out. This paper deals with the isolation of compounds and their antioxidant effects, along with their SOD enzymatic activities and ROS levels in Caenorhabditis elegans.

Plant material – The flower buds of Daphne genkwa S. et Z. (Thymelaeaceae) were collected and air-dried in May 2011 at Wanju, Jeonbuk, Korea. A voucher specimen was deposited in the herbarium of College of Pharmacy, Woosuk University (WSU-11-042).

Extraction and isolation – The shade dried plant material (600 g) was extracted three times with methanol at 50 ℃ and filtered. The extracts were combined and evaporated in vacuo at 50 ℃. The resultant methanol extract (125 g) was subjected to successive solvent partitioning to give n-hexane (9.2 g), methylene chloride (15.5 g), ethyl acetate (10.1 g), n-butanol (29.4 g) and H2O soluble fractions. Each fraction was tested for the radical scavenging effect on 1,1-diphenyl-2-picrylhydrazyl (DPPH). Among these fractions, the ethyl acetate fraction showed the most significant free radical scavenging effect on DPPH (Fig. 1), and showed superoxide quenching activities (Fig. 2 and 3). The ethyl acetate soluble extract (10 g) was subjected to chromatography on a Sephadex LH-20 column to give six fractions (E1-E6). Fraction E4 was chromatographed on silica gel column chromatography (CHCl3-MeOH, 16 : 1) to give nine subfractions (E41-E49). Compounds 1 (14 mg), 2 (27 mg) and 3 (114 mg) were obtained from subfractions E41, E43 and E44 by crystallization with methanol, respectively. Subfraction E47 was purified on a Sephadex LH-20 column (MeOH) to give compound 4 (167 mg). 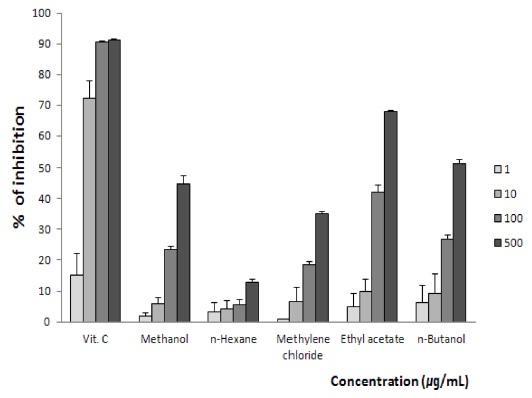 Fig. 1.Scavenging effects of methanol extract and its subsequent fractions from Daphne genkwa on 1,1-diphenyl-2-picrylhydrazyl radical. 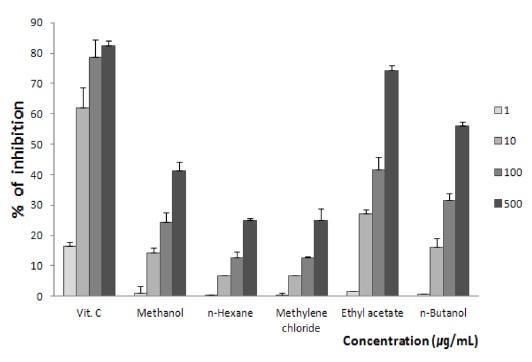 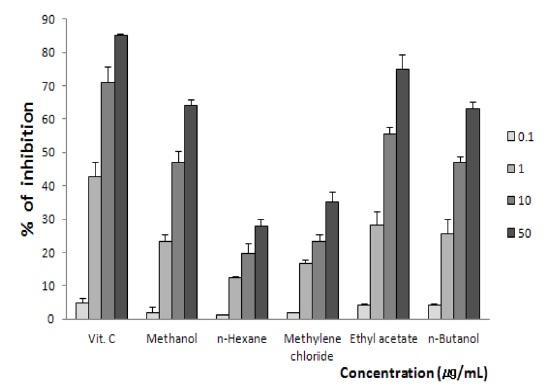 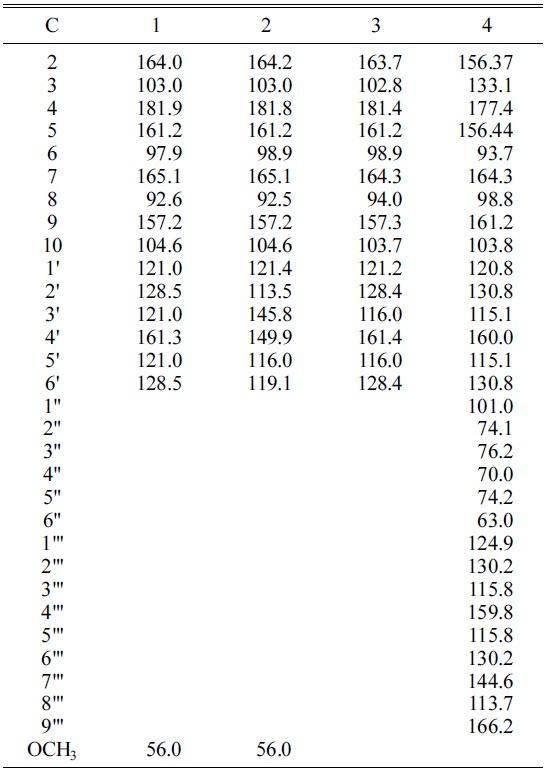 DPPH radical scavenging assay – Ethanol solutions of test samples at various concentrations (0.1 - 100 μg/ mL) were added to a solution of DPPH in ethanol (1.5 × 10−4M) in 96 well plates. After storing these mixtures for 30 minutes at room temperature, the remaining amounts of DPPH were determined by colorimetry at 520 nm on a microplate reader.16 And the radical scavenging activity of each compound was expressed by the ratio of the lowering of the DPPH solution in the absence of compounds. The mean values were obtained from triplicate experiments.

Riboflavin-originated superoxide quenching assay − Superoxide quenching activities of test samples were measured photochemically, using an assay system consisting of methionine, riboflavin and nitrobluetetrazolium (NBT).17,18 The reaction mixture was composed of 2.6 μM riboflavin, 13 mM methionine, 75 μM NBT, 0.1 mM EDTA, 0.05 M sodium phosphate (pH 7.8), and various concentrations of test samples. The sample was randomly placed in a light storage box and replaced randomly every 5 min for 15 min. The temperature within the light storage box was 20 ± 1 ℃ during the light illumination. The light intensity at the sample level was 5,500 lux. NBT was reduced to blue formazan formation during the light illumination, and that was measured by the absorbance at 560 nm. The inhibition of blue formazane formation was taken as superoxide quenching activity.

Xanthine-originated superoxide quenching assay − Superoxide radicals were generated by xanthine/xanthine oxidase and measured by previously reported method.19 In brief, test samples were mixed with 20 mM phosphate buffer (pH 7.8) containing 0.48 mM NBT and 1.6 mM xanthine. After 5 min, xanthine oxidase (0.05 U/mL) 100 ìL was added. The absorbance of reaction mixture was read at 570 nm after 30 min incubation at 37 ℃. Superoxide radical scavenging activity was expressed by the degree of NBT reduction of a test group in comparison to that of control.

Caenorhabditis elegans maintenance and compounds treatment − Bristol N2 (wild-type) was kindly provided by Dr. Myon-Hee Lee (East Carolina University, NC, USA). The worms were grown at 20 ℃ on nematode growth medium (NGM) agar plate with Escherichia coli OP50 as described by Brenner.20 To prepare plates supplemented with isolated compounds, the stock solution in DMSO was inserted into autoclaved NGM plates (at 50 ℃). A final DMSO concentration of 0.2% (v/v) was maintained under all conditions.

Measurement of antioxidant enzyme activities21 − To assess enzymatic activity, the worm homogenates were prepared. Briefly, the worms were harvested from plate with M9 buffer on the adult day 5 and washed three times. Then, the collected worms were resuspended in homogenization buffer (10 mM Tris-HCl, 150 mM NaCl, 0.1 mM EDTA, pH 7.5) and homogenized on ice. SOD activity was measured spectrophotometrically analysing the decolorization of formazan using enzymatic reaction between xanthine and xanthine oxidase. The reaction mixture contained 20 μL of worm homogenates and 480 μL of 1.6 mM xanthine, 0.48 mM nitroblue tetrazolium (NBT) in 10 mM phosphate buffer (pH 8.0). After preincubation at room temperature for 5 min, the reaction was initiated by adding 1 ml of xanthine oxidase (0.05 U/ ml) and incubation at 37 ℃ for 20 min. The reaction was stopped by adding 500 μL of 69 mM SDS, and the absorbance at 570 nm was measured. SOD activity was expressed as a percentage of the scavenged amount per control. 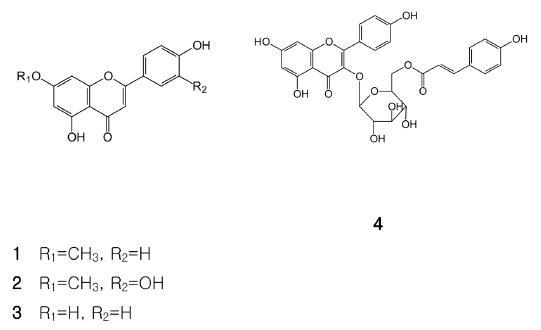 Analysis of intracellular ROS21 − Intracellular ROS in the nematodes was measured using molecular probe 2',7'- dichlorodihydrofluoroscein diacetate (H2DCF-DA). Equal number of wild-type worms was incubated in the absence or presence of compounds. On the 4th day of adulthood, animals were exposed to 96-well plate containing 60 mM paraquat liquid culture for 3 h. Subsequently, 5 worms were transferred into the wells of a 96-well plate containing 50 μL of M9 buffer. Immediately after addition of 50 μL of 25 μM H2DCF-DA solution resulting in a final concentration 12.5 μM, basal fluorescence was quantified in a microplate fluorescence reader at excitation 485 nm and emission 535 nm.

The total methanol extract was suspended in water and partitioned successively with n-hexane, methylene chloride, ethyl acetate and n-butanol. Among these fractions, the ethyl acetate soluble fraction showed the most potent scavenging effect on DPPH free radical (Fig. 1), and showed superoxide quenching activities (Fig. 2 and 3). Through the reiteration of column chromatography using Sephadex LH-20 and silica gel chromatography led to the isolation of four compounds. 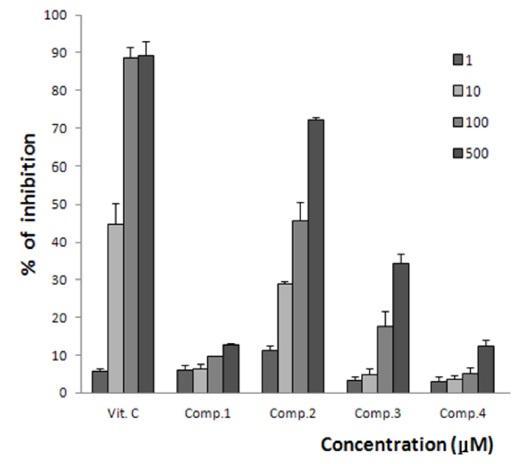 Compounds 1 - 4 showed positive reactions on Mg-HCl tests, and similar patterns in their NMR spectra. Compounds 1 - 4 were deduced to be flavonoids. The structure characterization of these compounds was carried out by interpreting their spectral data and comparing them with the data reported in the literatures. Compounds 1 - 4 were identified as genkwanin (1),22 3'-hydroxygenkwanin (2),23 apigenin (3),22 and tiliroside (4).24 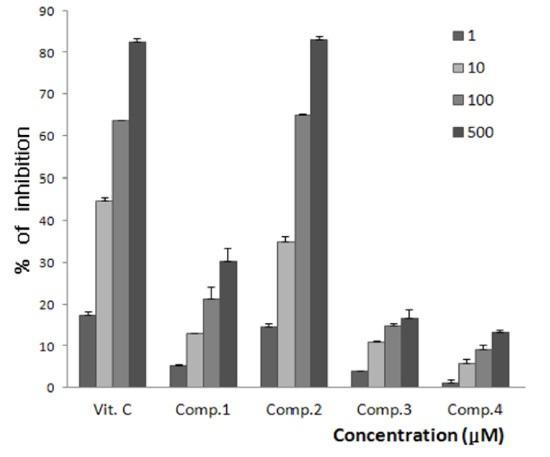 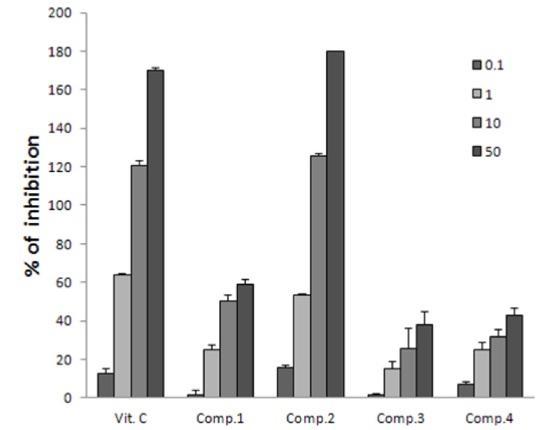 The superoxide anion derived from oxidation of xanthin, causes the oxidation of NBT to water-soluble formazan. And the decrease of absorbance at 570 nm with antioxidants represents the quenching of superoxide anion in reaction mixture. Xanthine-originated superoxide quenching activities of the compounds 1 - 4 were shown in Fig. 7. The positive control vitamin C showed the superoxide quenching activity with the IC50 value of 0.41 μM. Whereas, compound 2 exhibited scavenging activities dose-dependently on the xanthine-NBT-xanthine oxidase system with IC50 value of 0.92 μM (Fig. 7). 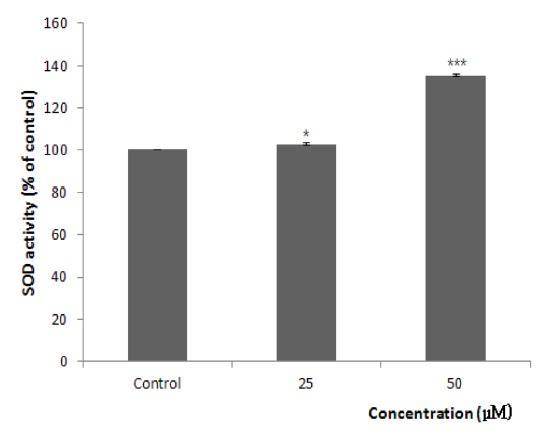 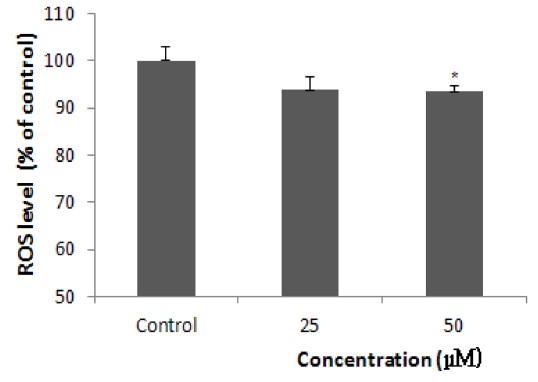 Fig. 9.Effects of compound 2 on intracellular ROS levels of wild-type N2 nematodes. Data are expressed as the mean ± S.E.M. of three idependent experiments (N = 3). Differences compared to the control were considered significant at *p < 0.05.

These results suggest that compound 2 mediated radical scavenging activities, and its up-regulation of antioxidant enzyme activity was likely associated with the attenuation of intracellular ROS level. As a result of this study, the isolated compound 2 from the flower buds of D. genkwa may be useful for the treatment of various oxidative damages.