The Korea Journal of Herbology (대한본초학회지)

The Korea Association of Herbology (대한본초학회)

Gyejibokryeong-hwan (GBH), a traditional herbal formula, consists of five herbal medicines, including the twig of Cinnamomum cassia (Nees & T. Nees) J. Presl, the sclerotium of Poria cocos F.A. Wolf, the root bark of Paeonia suffruticosa Andrews, the root of Paeonia lactiflora Pall., and the seed of Prunus persica Batsch. GBH has been clinically used to treat gynaecological diseases such as uterine myoma, hysteromyoma, and hot flushes1-3).

In the present study, the GBH decoctions were prepared by using pressurized (1 kgf/㎠) or non-pressurized condition (0 kgf/㎠) for extraction times from 30 min to 180 min with extraction temperature maintained at 100 ℃. The extraction yield, total soluble solids content (TSSC), and hydrogen ion concentration (pH) were compared. The quantification of GBH decoction was performed using high performance liquid chromatography coupled with photodiode array detector and the contents of chemical compounds were also compared. The influence of extraction factors on extraction variables, such as extraction yield, TSSC, pH, or the content of each chemical compound in pressurized and non-pressurized decoction was investigated using regression analysis. 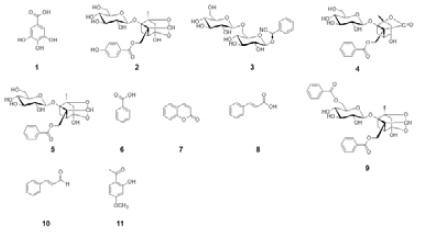 The herbal medicines were purchased from the herbal medicine company Kwangmyungdang Medicinal Herbs (Ulsan, Korea). A voucher specimen (2014-KE31-1–5) has been deposited in the Herbal Medicine Formulation Research Group of the Korea Institute of Oriental Medicine. Herbal composition of GBH is shown in Table 1.

Accurately weighed standard compounds were dissolved in methanol to produce stock solutions at concentrations of 1 mg/mL. Each stock solution was diluted to make working solutions, which were used to construct calibration curves.

3. Preparation of GBH decoctions and samples

The mixture of herbal medicines composing GBH (750 g corresponding to double amount of one formula set, 'Je' in Korean) were extracted at 100 ℃ in water using a high-speed vacuum herb extractor (Cosmos 660, Kyungseo Machine, Incheon, Korea). The extraction was carried out under pressurized (1.0 kgf/㎠) or non-pressurized (0 kgf/㎠) methods for 30, 60, 90, 120, 150, and 180 min. The extraction water was regulated to make the final volumes of the decoctions around 3800 mL. A 50 mL of each decoction was lyophilized using a freeze-drier (IlshinBioBase, Dongducheon, Korea) to make a powder, which was then dissolved in HPLC-grade water and was filtered through a 0.2 mm syringe filter (SmartPor®; Woongki Science, Korea) prior to HPLC injection.

To calculate the yield of decoctions, the weight of each freeze-dried decoction was converted to a percentage of the formula used for a single extraction. TSSC (°Brix) of each decoction was measured using a refractometer (Pal-a; ATAGO, Tokyo, Japan). A pH was determined with a pH meter (672 pH/Ion meter; Metrohm, Switzerland).

The HPLC-PDA system comprised a Shimadzu LC-20A (Shimadzu Corporation, Kyoto, Japan) equipped with a solvent delivery unit (LC-20AT), autosampler (SIL-20AC), column oven (CTO-20A), degasser (DGU-20A3), and PDA (SPD-M20A). The acquired data were processed using LabSolutions software (Ver. 5.3; Shimadzu, Japan). Separation was performed on a Gemini C18 column (4.6 × 250 mm, 5 ㎛; Phenomenex, Torrance, CA, USA) maintained at 40 ℃. The flow rate was 1.0 mL/min and the injection volume was set to 10 µL. The mobile phase consisted of water (A) and acetonitrile (B), both containing 1% acetic acid. Gradient elution of the mobile phase was applied: 10–60% (B) over 0–30 min, 60–100% (B) over 30–40 min, held for 5 min, and then re-equilibrated to 10% until the end of the analysis. The detection wavelength for each compound was screened from 190 nm to 400 nm and optimal wavelength was set according to the maximum absorption wavelengths of the standard compounds (230, 260, 270 and 275 nm). The analytical conditions in the previous work of our laboratory were applied to this study (Kim JH et al. Arch Pharm Res. 2014).

1. Comparison of extraction yield, TSSC, and pH in GBH decoctions 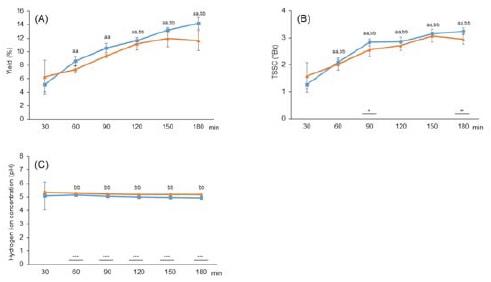 2. Comparison of the contents of the marker compounds in GBH decoctions

Linear equation, correlation coefficients (r2), limit of detection, and limit of quantification in previous paper of our laboratory (Kim JH et al. Arch Pharm Res. 2014) were applied to this study as shown in Table 21). The eleven marker compounds, gallic acid, oxypaeoniflorin, amygdalin, albiflorin, paeoniflorin, benzoic acid, coumarin, cinnamic acid, benzoylpaeoniflorin, cinnamaldehyde, and paeonol, detected in the GBH decoction were well separated on chromatograms without overlapping or interruption by adjacent peak by using the methods described above (Fig. 3 and 4). 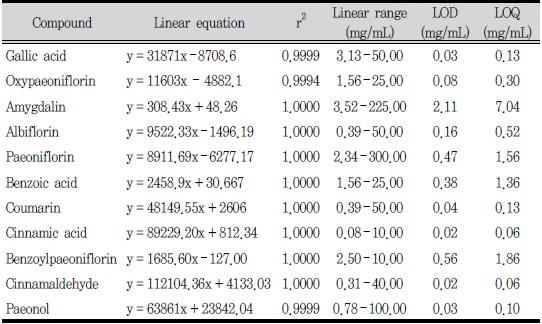 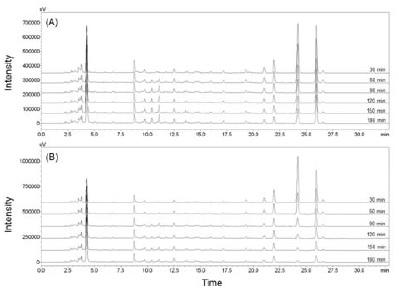 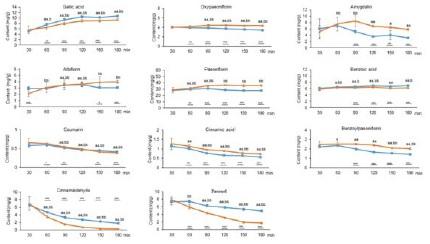 3. Regression analysis of the influence of the pressure and extraction on extraction yield, TSSC, pH, and the content of each marker compound 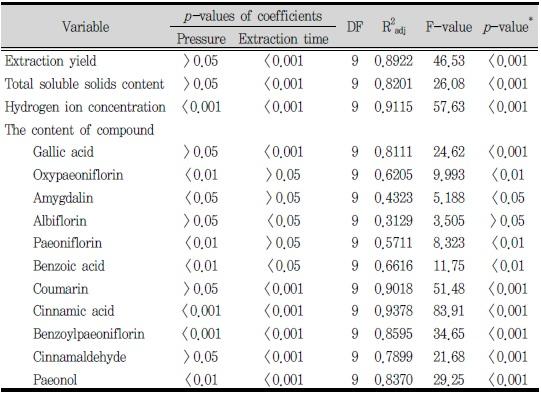 In the present study, the influences of extraction factors (pressure and extraction time) to variables such as extraction yield, total soluble solids content (TSSC), hydrogen ion concentration (pH), and the content of chemical compounds were investigated in GBH decoctions.

We conclude that pressure and extraction time can influence the extraction efficiency of compositional constituents of GBH decoctions, however, in-depth study is necessary to find optimal extraction conditions for herbal formula, from the pharmacological viewpoint as well as the physicochemical viewpoint.