Cisplatin, an inorganic molecule, is one of the simplest and the most effective chemotherapeutic agent. It has been widely used to treat various types of solid tumors, including ovarian, testicular, head, neck, uterine cervical carcinoma, and nonsmall cell lung carcinoma. However, the use of cisplatin and its efficacy are limited by its various adverse effects, including ototoxicity, peripheral neuropathy, and particularly nephrotoxicity (1-5). The signaling mechanisms responsible for cisplatininduced nephrotoxicity appear to be multifactorial, including inflammation, oxidative stress, and apoptosis (4, 5). Approximately one out of three patients experience significant reduction in renal function following cisplatin treatment (5). Therefore, it is important to overcome the nephrotoxicity of cisplatin without diminishing its anticancer efficacy.

Neuropeptide Y (NPY) is a highly conserved peptide containing 36 amino acids. Its biological effect is mediated by six G-protein-coupled receptors (Y1R to Y6R). NPY is known to regulate a variety of physiological processes, including appetite, energy storage, and pain (6-9). It has been reported that p53 tumor suppressor gene can affect neuronal survival in sympathetic neurons (10). Several studies have reported that NPY is involved in cell death (7, 9, 10). It has also been reported that NPY can prevent bone marrow nerve injury by protecting sympathetic nervous system (SNS) fibers via Y1 receptor signaling in cisplatin-treated mice (10). Although the link between NPY and cell survival in diverse environments has been reported, it remains unclear whether NPY has any effect on renal cell survival. Therefore, the objective of this study was to determine the effect of NPY on renal cell survival associated with cisplatin-induced nephrotoxicity. We also determined whether NPY could protect renal cells against cisplatin-induced renal dysfunction and whether such effect was mediated by Y1 receptor signaling. Our results suggest a new role for NPY in renal dysfunction and have important relevance for preservation of renal function in cancer patients.

As mentioned above, cisplatin-induced nephrotoxicity is a common side effect of clinical chemotherapy for cancer patients (3-5, 11-13). To determine whether NPY could prevent cisplatin-induced nephrotoxicity, mice were injected with NPY or PBS after induction of renal injury by cisplatin (Fig. 1A). We first analyzed changes in NPY expression levels induced by cisplatin in the kidney. The mRNA levels of NPY in renal cells were significantly decreased in cisplatin-treated mice compared to those in PBS-treated controls (Fig. 1B). Plasma concentrations of blood urea nitrogen (BUN) and creatinine, indicators for loss of kidney function, were significantly (P ＜ 0.05) elevated in cisplatin-treated mice. However, they were decreased by NPY treatment (Fig. 1C, D). Histologic analysis with hematoxylin and eosin (H&E) staining showed that the increase in apoptotic tubular cells in the renal cortex induced by cisplatin treatment was diminished by NPY treatment (Fig. 1E). These results suggest that NPY can protect renal cells against cisplatin-induced dysfunction. 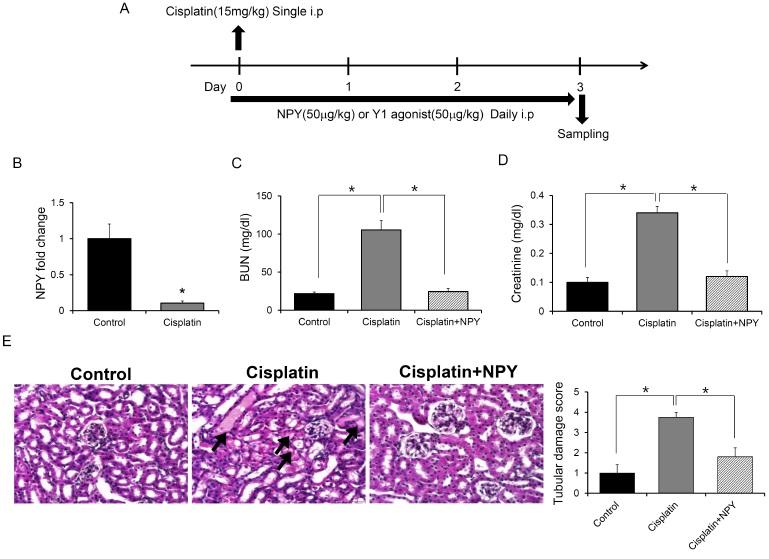 Renal apoptosis is a main pathogenesis in kidney injury caused by cisplatin treatment (1, 2, 14). To determine whether NPY diminished cisplatin-induced apoptosis in the kidney, we examined renal apoptosis by TUNEL assay. NPY treatment led to a decrease in apoptotic cells in the kidney (Fig. 2A). Next, we evaluated the expression levels of key modulators of the p53-dependent apoptosis pathway. We found that the expression levels of p53 and pro-apoptotic genes such as Bax, Noxa, and Puma were increased in cisplatin treated mice but decreased in NPY treated mice (Fig. 2B, C). Taken together, these results indicated that NPY could abrogate cisplatininduced renal apoptosis via down-regulating gene expression in the p53-dependent apoptosis pathway. 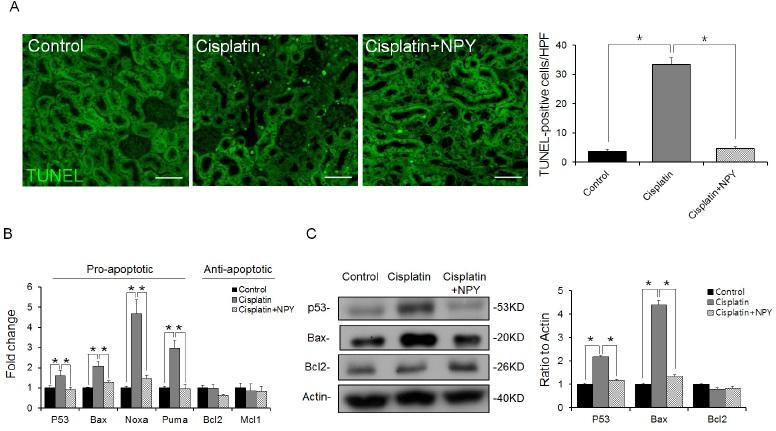 Next, we determined which receptor was associated with the protective effect of NPY in renal apoptosis. First, we examined the expression levels of NPY receptors in the kidney of cisplatin treated mice. Among different receptors, the expression level of Y1 receptor was significantly decreased after cisplatin treatment (Fig. 3A). Therefore, we focused on the Y1 receptor in order to examine the mechanism of NPY-mediated protection in cisplatin-induced renal injury. To confirm the renoprotection of NPY through Y1 receptor signaling, a Y1 agonist was injected into cisplatin-treated mice as described in Fig. 1A. Creatinine and BUN levels were reduced in Y1 agonist treated mice compared to those in cisplatin-treated mice (Fig. 3B, C). Mice treated with cisplatin demonstrated various injuries, whereas mice infused with the Y1 agonist showed significantly reduced renal injury (Fig. 3D). Moreover, the Y1 agonist decreased cisplatin induced renal injury (Fig. 3E). We also determined the expression levels of apoptosis-related genes and proteins. Similar to the results observed with NPY treatment, we found that the Y1 agonist suppressed the expression levels of p53 and pro-apoptotic genes such as Bax, Noxa, and Puma (Fig. 3F, G). Taken together, these results strongly suggest that NPY can provide renoprotection against cisplatin-induced kidney injury through Y1 receptors. 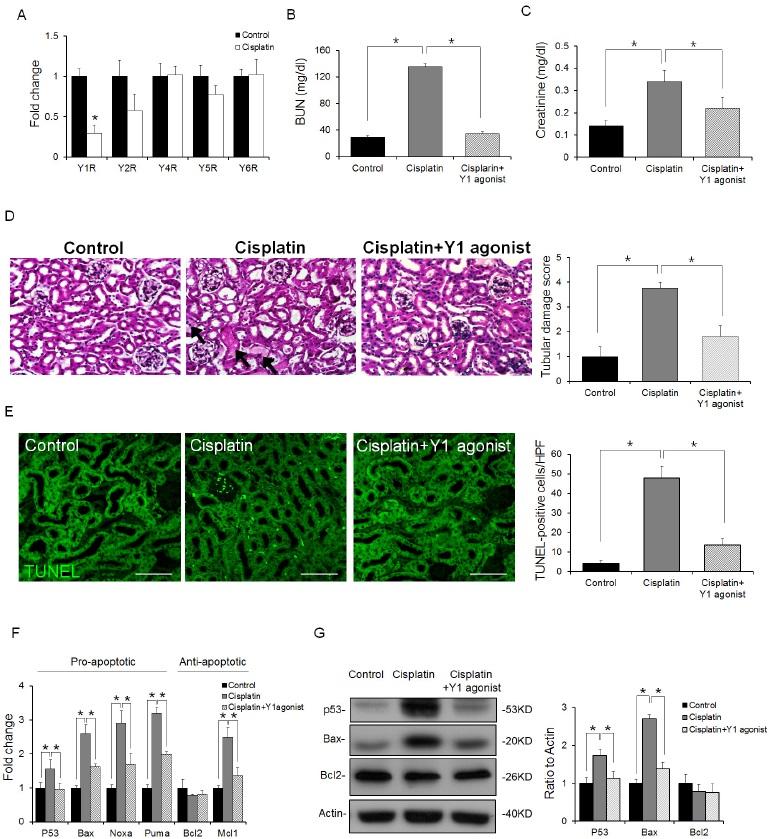 Cisplatin is one of the most widely used and the most potent chemotherapeutic agent for different cancers, including testicular, ovarian, head and neck, lung, and other types of cancer. Unfortunately, its clinical use is limited by its severe side effect on normal tissues. Nephrotoxicity is one such side effect that limits its use in cancer therapy (1, 3-5, 11, 12). Many studies have suggested that cisplatin induces injury in renal vasculature and decreases blood flow and ischemic injury of kidneys, resulting in decreased glomerular filtration rate. These events will eventually culminate in the loss of renal function and trigger acute renal failure (11-13, 15). Recently, we have demonstrated that NPY is required for the maintenance of bone marrow function by protecting SNS fibers and cell survival within the bone marrow microenvironment from chemotherapyinduced bone marrow impairment through Y1 receptor signaling (10). However, the role of NPY in cisplatin-induced renal injury has not been fully characterized.

In this study, for the first time, we showed that NPY could protect renal dysfunction by regulating the pro-apoptotic pathway through Y1 receptor signaling. We demonstrated that NPY treatment could attenuate cisplatin-induced renal dysfunction by decreasing serum levels of creatinine and BUN (Fig. 1). It has previously been documented that the suppression of apoptosis can protect renal cells against cisplatin cytotoxicity and nephrotoxicity (2, 4, 12, 14). It has been reported that NPY can regulate downstream proteins of p53 and mediate apoptosis via Y receptors, thus preventing cell death (7, 9, 16). Here, we observed that the expression levels of p53 and pro-apoptotic genes such as Bax, Noxa, and Puma were decreased in cisplatin treated mice following NPY infusion (Fig. 2). In addition, we confirmed that NPY could attenuate renal dysfunction caused by cisplatin-induced nephrotoxicity via Y1 receptor signaling in the kidney (Fig. 3). Previous studies have demonstrated that some peptides such as Glucacon-Like Peptide-1 (GLP-1) can mediate renoprotection. GLP-1 or GLP-1 receptor agonist can protect renal dysfunction and tubular cell apoptosis by increasing the expression levels of anti-apoptotic genes such as Bcl-2 and Bcl-xL in cisplatin-induced renal injury mice model (17, 18). Although NPY did not significantly increase the expression levels of anti-apoptotic genes, the expression levels of pro-apoptotic genes were reduced by NPY treatment in this study. Especially, NPY down-regulated the levels of p53, an upstream protein of pro- and anti- apoptotic genes, suggesting that NPY could be used as an effective agent for renoprotection. NPY also has therapeutic benefit as a stable peptide synthesized in the human body (10). Therefore, NPY may be applicable in patients who have already received cisplatin or have experienced nephrotoxicity. Taken together, our results strongly indicate that NPY could be used as a potential strategy to prevent cisplatin-induced nephrotoxicity.

Six- to eight- weeks old male or female C57BL/6 mice were purchased from the Jackson laboratory. A block randomization method was used to divide these animals into experimental groups. To eliminate bias, investigators were blinded during data collection and analysis. Mice were housed under a 12-hour day-night cycle. They were provided with free access to tap water and food pellets. Animal studies were approved by the Kyungpook National University Institutional Animal Care and Use Committee.